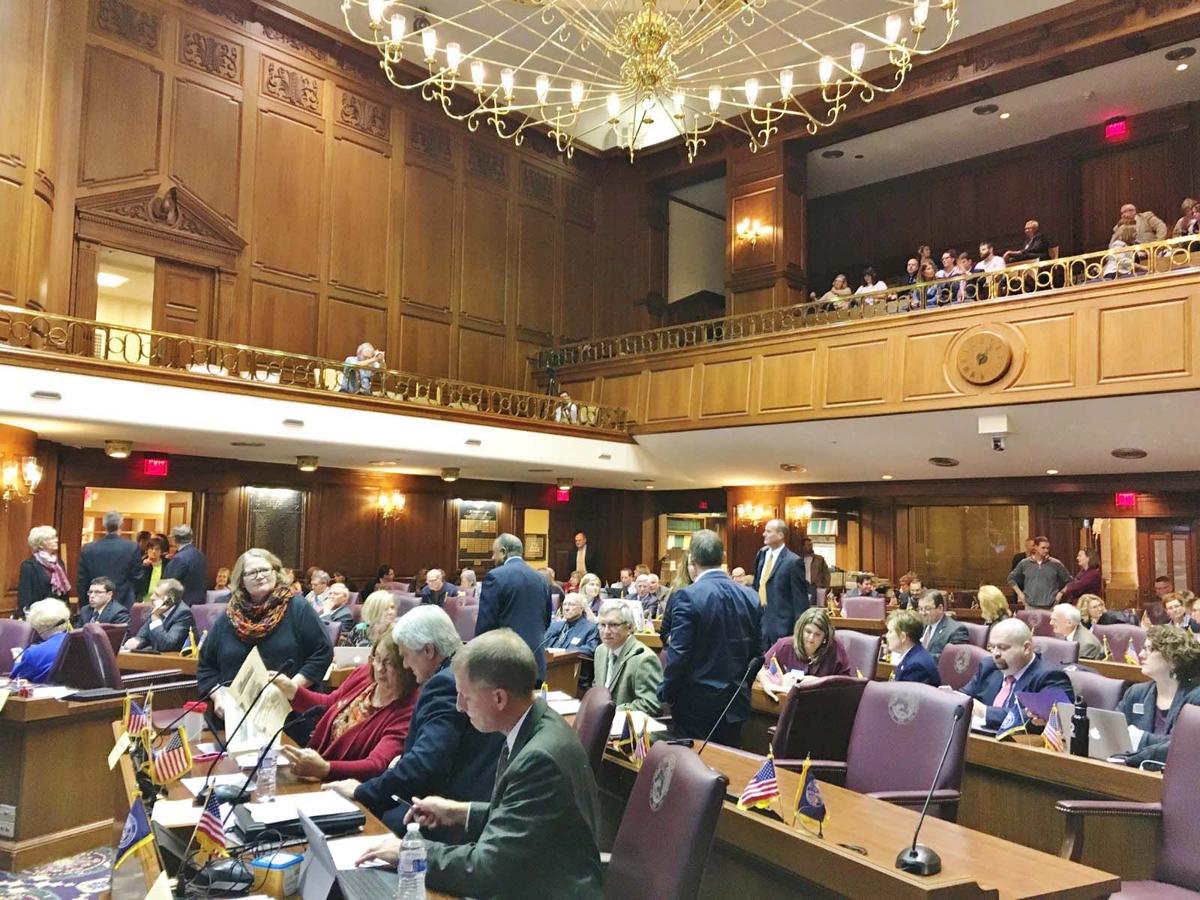 State legislators prepare Monday afternoon in the Indiana Statehouse to listen to testimony about the state's teacher shortage. 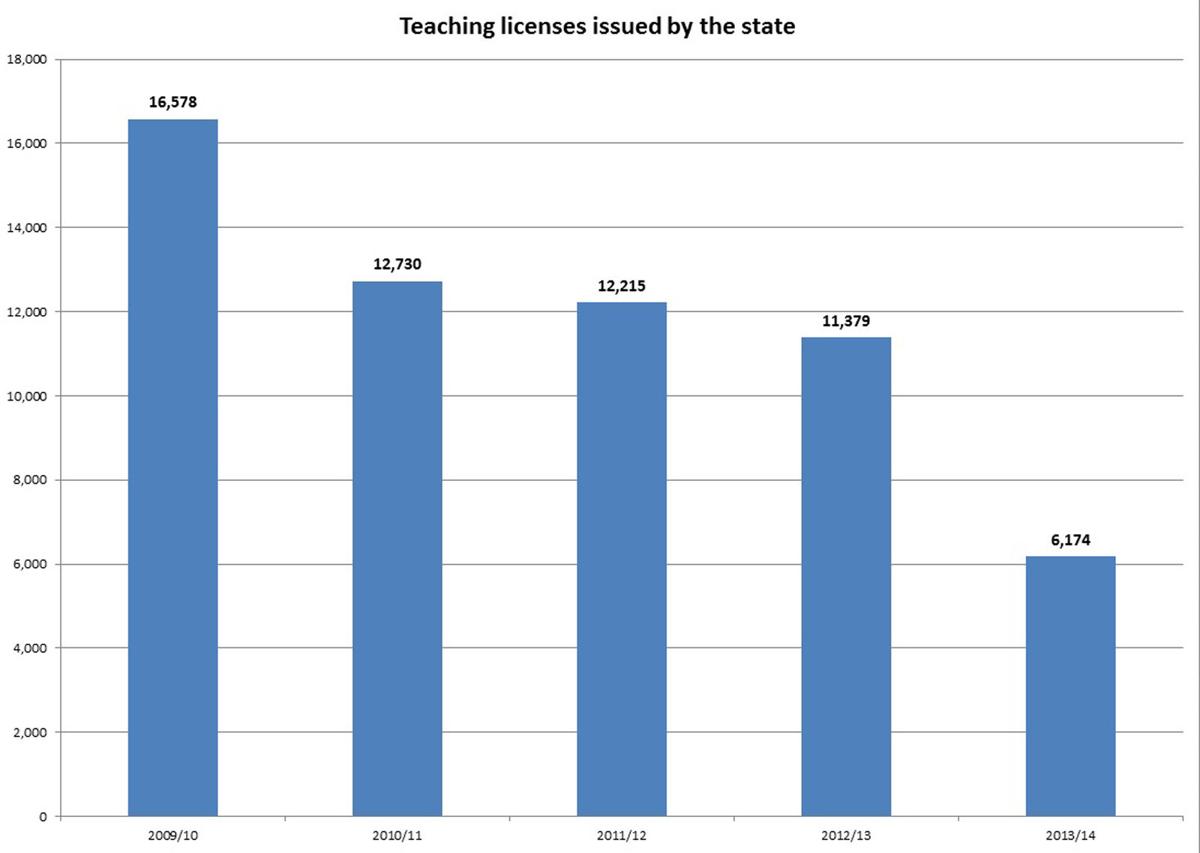 The number of teaching licenses the Indiana Department of Education issued to first-time teachers fell by 63 percent from 2009/10 to 2013/14 -- though state officials said the most recent decline was at least partially the result of more rigorous testing. Excluding the more rigorous testing year, the number of licenses issued by the DoE fell by 31 percent from 2009/10 to 2012/13. The figures include teachers with licenses in multiple subject areas. The number of new teachers who obtained teaching licenses in the state has fallen 18.5 percent in the last four years.

State legislators prepare Monday afternoon in the Indiana Statehouse to listen to testimony about the state's teacher shortage.

The number of teaching licenses the Indiana Department of Education issued to first-time teachers fell by 63 percent from 2009/10 to 2013/14 -- though state officials said the most recent decline was at least partially the result of more rigorous testing. Excluding the more rigorous testing year, the number of licenses issued by the DoE fell by 31 percent from 2009/10 to 2012/13. The figures include teachers with licenses in multiple subject areas. The number of new teachers who obtained teaching licenses in the state has fallen 18.5 percent in the last four years.

INDIANAPOLIS, Ind. — Low salaries and an ever-increasing focus on standardized testing were cited as just two of the contributing factors of the state’s teacher shortage, teaching professionals told state legislators in a hearing Monday.

Among the multitude of reasons that teachers — and those who prepare students to become teachers — listed as causes of the shortage during the Indiana General Assembly’s Interim Study Committee on Education hearing, one message repeatedly reverberated through the meeting hall: Treating teachers with more respect.

Joshua Francis, interim dean of Indiana Institute of Technology’s College of General Studies and director of teacher preparation, said that he frequently hears students and teachers cite too little pay, too much testing and lack of respect for abandoning the profession.

Last summer, state administrators and officials noticed that schools were struggling to fill vacant teacher positions and that the number of applicants for teaching positions in the state’s school districts has declined in recent years.

State lawmakers had pushed for a study on the teacher shortage after the Greensburg (Indiana) Daily News reported this summer that the number of novice teacher licenses by the state has declined in the last few years. Figures released since then by the Indiana Department of Education show that licenses issued by the state to novice teachers has fallen by 30 percent between 2009/10 and 2014/15.

Licenses issued to more experienced teachers declined by about 90 percent between 2009/10 and 2013/14. Data for the last year are not yet available.

While several individuals shared possible reasons behind the state’s current teacher shortage following last month's survey findings, others questioned if there truly is a shortage at all.

“Indiana has an excess supply of teachers,” Michael Hicks, an economist with Ball State University, said. The George and Frances Ball distinguished professor of economics and the director of the Center for Business and Economic Research also attributed any enrollment decline in teacher preparation programs at universities to teachers not being able to find jobs upon graduation.

Hicks also mentioned that while teacher preparation programs may be seeing an enrollment decline, the graduation rate could remain steady, citing that, for the last three decades, the number of teaching major graduates has been flat relative to the number of school age children.

Despite his reasoning, Hicks was outnumbered by several others who agreed that Indiana is dealing with a teaching shortage.

Though the true root of the teacher shortage went unidentified, speakers offered other reasons why teacher, both veteran and novice, may not be interested in stepping into vacant positions.

Suzanne Ehst, Director of Secondary Education at the state’s Goshen College, said  that teachers and would-be-teachers also have said that the career seems too unstable to them, in part because their pay is tied to student performance, which reflects many aspects beyond teacher performance, including home life and a student’s parental support.

Other speakers told the commission that the state should focus on teacher quality — rather than quantity — and that it should make it easier for teachers who are licensed in other states to obtain teaching licenses in Indiana.

Sandi Jacobs, vice president of the National Council on Teacher Quality, suggested that students interested in becoming teachers may be swayed to study math or science education or other areas with significant shortages if they are told about job prospects in areas where the state has enough teachers.

She also said that Indiana could follow other states’ models to try to entice people to become teachers in certain fields and geographic areas. Georgia, for example, gives new high school math and science teachers a starting salary equivalent to a teacher with six years of experience. New Mexico pays teachers a $5,000 stipend if they teach in science, technology, math and engineering or if they teach in hard-to-staff schools.

Jacobs and other speakers also encouraged the state to collect more detailed data to better be able to analyze the state’s specific challenges that are contributing to the teacher shortage.

In an effort to truly pinpoint the focus of the state’s shortage of interested educators, Glenda Ritz, the state’s superintendent of public instruction, also has created a Blue Ribbon Commission to figure out ways to better recruit and retain teachers.

Ritz told legislators on Monday that she and the more than 40 members of the commission are looking for systemic change and have identified potential strategies for improvement, including a mentoring program, increases in compensation, a media campaign to recognize teachers, streamlining standardized tests and revising teacher evaluations.

The commission will meet twice more before issuing recommendations for action.

The Greensburg (Indiana) Daily News contributed details to this story.