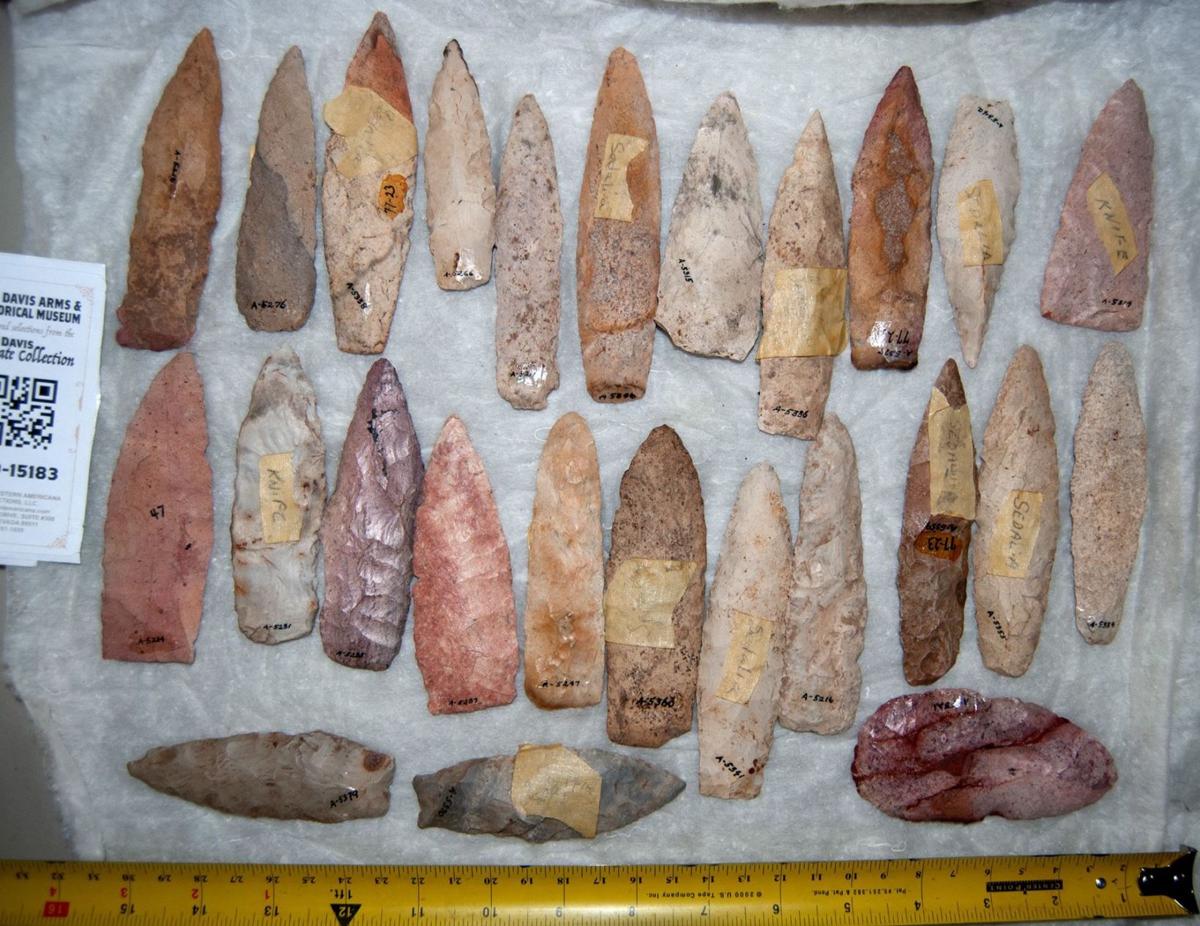 Major chert knife and projectile point collection, including about 100 points averaging about 4 inches long, a significant number of them labeled for the source ($3,875).

Major chert knife and projectile point collection, including about 100 points averaging about 4 inches long, a significant number of them labeled for the source ($3,875).

An 1864 J.M. Stevens & Co. presentation rifle engraved “from Buffalo Bill to Night-Hawk & Broncho Bill” scored a bull’s-eye for $18,125, and a pre-1845 S. Hawken Kentucky half-stock walnut rifle rang out for $15,000 in an auction held July 26-28 by Holabird Western Americana Collections, at the J.M. Davis Arms and Historical Museum in Claremore.

About 2,400 antique firearms from the private collection of J.M. Davis – part of the largest privately held firearms collection in the world, one spanning multiple conflicts and generations –were offered in the three-day event. In addition to antique firearms, the sale also featured swords, knives, projectile points, Native Americana, historic Midwestern pottery, pinbacks and ribbons.

The money raised will provide ongoing funding for the preservation, conservation and upkeep of the J.M. Davis Collection, presently housed at the museum that bears Davis’ name in Claremore. The museum is celebrating its 50th anniversary. Davis first displayed his burgeoning collection at the Claremont Hotel back in 1929. Davis and his wife Addie had purchased the hotel in 1917. In 1965 the J.M. Davis Foundation was set up to manage the collection, which had become huge.

The Buffalo Bill Cody rifle was one of J.M. Davis’s prized possessions. It was on display at the Mason Hotel in Claremore until about 1968-1969. It never made it into the huge public display of more than 20,000 guns at the J.M. Davis Firearms Museum over its 50-year lifespan. As such, it was unknown to most modern antique firearm experts and was truly a fresh-to-the-market rifle.

The S. Hawken rifle had a Kentucky half-stock of walnut with a full engraved lock that appeared original. The barrel flat was marked "S. Hawken" and the brass cap-box oval cheek piece showed the Masonic emblem of Square and Compass. The rifle exhibited beautiful craftsmanship from a master gunsmith, a fine .54-caliber St. Louis gun with lengthy tang, two screws, fully engraved.

Samuel Hawken arrived in St. Louis in 1822, 15 years after his brother Jacob. The pair operated separate businesses until 1845. Jacob Hawken died during a cholera outbreak in 1849. Samuel reverted to stamping rifles, with the marking on the rifle sold. Hawken rifles were favored by fur traders, including Kit Carson, Jim Bridgers and Joseph Meek. Teddy Roosevelt also owned one.

A strong crowd was present for the gun sales, and for those unable to attend in person, online bidding was provided by iCollector.com, LiveAuctioneers.com, Invaluable.com, Auctionzip.com and AuctionMobility.com. Internet bidding was tremendous; as many as 650 live bidders at a time participated with determination. All lots were offered without reserves to the highest bidder.

Following are additional highlights from the sale. Prices include the buyer’s premium.

A John Dickson & Son double-barrel rifle from the 1920s with dual hammers and triggers and some engraving, rang out at $5,312; An 1885 Lefever Arms Co. double-barrel shotgun rifle, 10 gauge cartridge drilling with the rifle barrel on top of the shotgun barrels, realized $5,000; and a French 1890s Patent Brevette ornate, magazine-fed shotgun with octagon barrel brought $4,148.

An American-made Iovrion flintlock pistol, circa 1750s-1770s, mounted on a walnut barrel with brass hardware, about .70 caliber, rose to $4,500; an 1885 Rigby black powder, hammer double-barrel rifle with rare, swing release Damascus rifled barrels, garnered $3,782; and a Kentucky Rev War-period flintlock pistol by an unknown manufacturer, circa 1770-1790s, made $3,625.

Another pistol by an unknown maker, this one .50 caliber from the 1840s, a rare swivel octagon to round barrel two-shot percussion weapon, earned $2,625; a Kentucky percussion rifle from the 1860s by an unknown maker, about .50 caliber, went for $3,000; and a revolving rifle by James Warners, under Springfield arms, an experimental design with 21-inch barrel, finished at $3,250.

A rare design G. (British Crown) rifle from the 1850s with a swivel musket with a barrel length of 37 ½ inches, possibly one of the first breech loader muskets, found a new owner for $3,782; a Civil War-era Parker Snow .58 caliber breech-loading carbine rifle in excellent shape brought $3,500; and a scarce Jenkins flintlock black powder cannon lighter knocked down for $2,875.

A double-barrel SxS rifle made by Daniel Fraser & Co. in 1900 went to a determined bidder for $3,250; an 1855 Colt revolving rifle in a musket design, with forearm and loading lever, in fine condition, hit the mark for $3,000; and a half-stock target rifle marked “E. Kleinhen, St. Louis”, a left-hand, .45 caliber percussion target rifle with a Scheutzen style butt plate, rose to $3,000.

An 18th century pistol inscribed with “Favl Montmain” on the thumb plate, possibly a French import that may have been carried by an American officer during the Revolutionary War, fetched $2,875; a 1790 half-stock rifle marked Elison Brothers of Memphis, Tenn., but originally from Pennsylvania, wearing an original flintlock made by Glocher of Philadelphia, went for $2,750; and a 1920s Edward Kettner combo, drilling rifle, 16 gauge, with an engraved plate, hit $2,500.

Calvin Eugene Washburn passed from this life on Sunday, February 9, 2020 at the age of 92. Calvin was born on March 26, 1927 in Sand Springs, Oklahoma to parents, Frederick and Lucille (Wood) Washburn. On August 31, 1944 Calvin enlisted in the Army. While he was in the Army he worked at the …