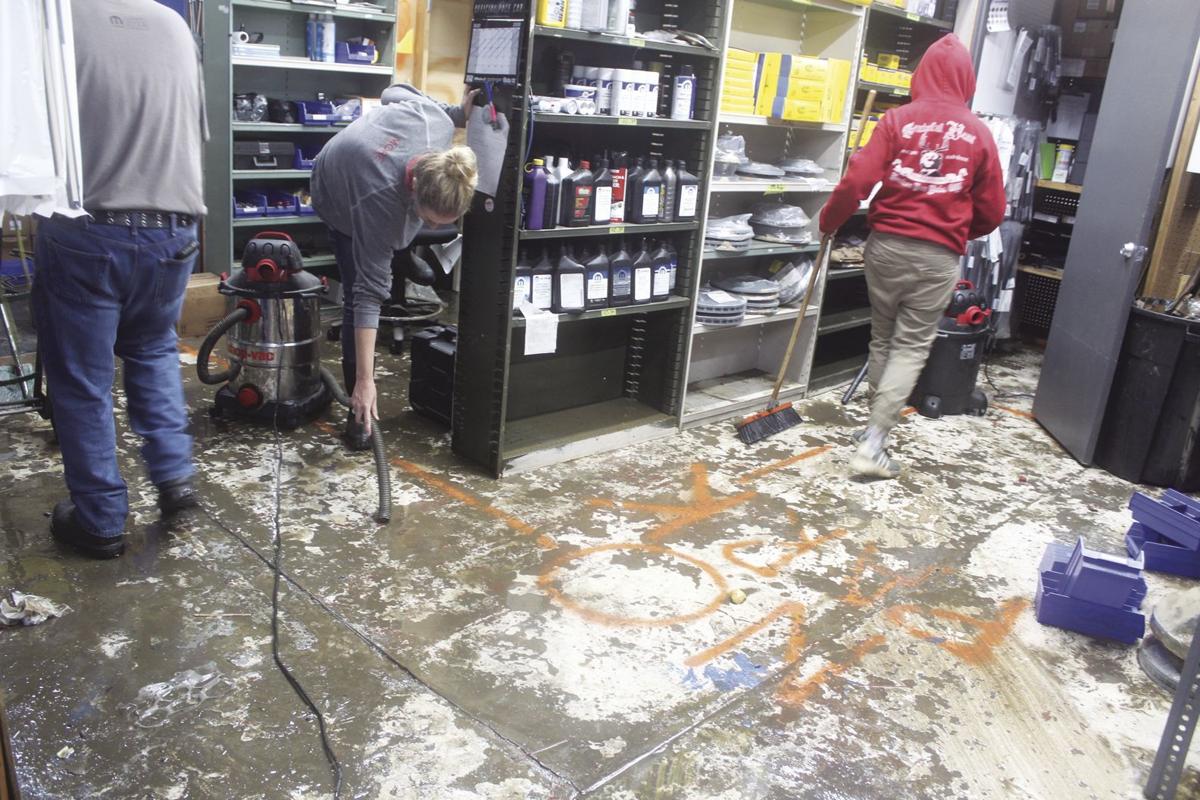 At the Melton Ram Chrysler Dodge Jeep dealership a handful of cars parked in their service department were lost. Additionally, flooding cost them parts that were stored on the bottom shelf. 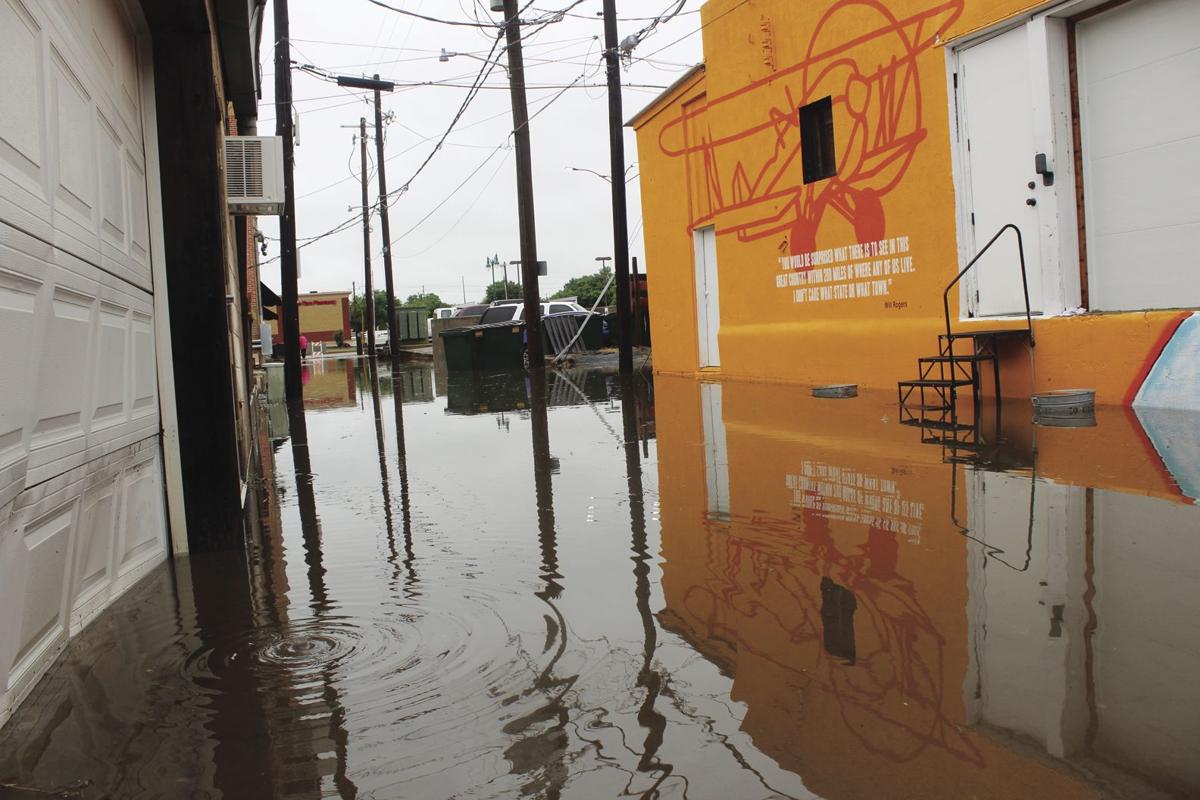 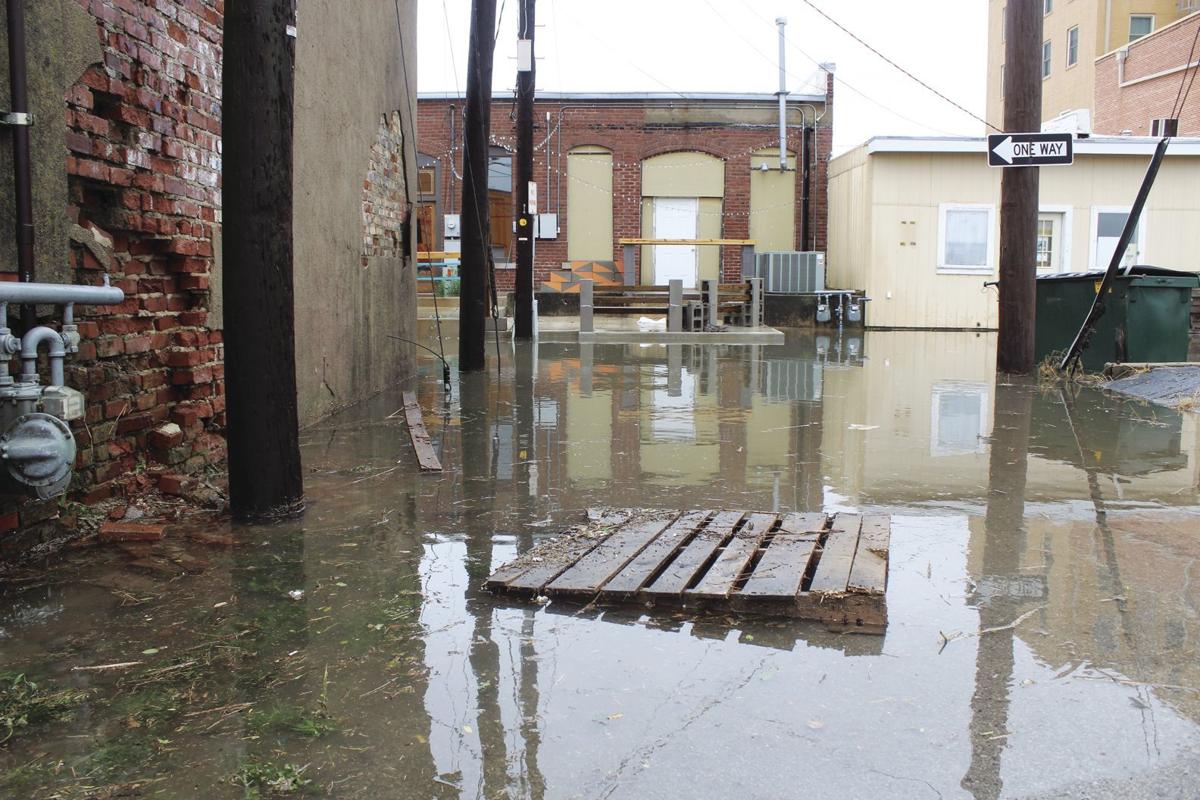 At the Melton Ram Chrysler Dodge Jeep dealership a handful of cars parked in their service department were lost. Additionally, flooding cost them parts that were stored on the bottom shelf.

North of the county courthouse, LoliPop Boutique, A Place ‘n Time, North Block Common, The Barron Law Firm, Melton Service Department and the alleyway access for Will Rogers Lofts all had varying degrees of flood damage.

A Place ‘n Time owners Gary and Michal Oplotnik lost everything touching the ground in the storage area at the back of their store, including four grandfather clocks and two keepsake paintings.

The waterline on their back door showed that storm water was 21 inches above ground level one point. Their garage door was bent inward from the pressure.

Several irreplaceable family heirlooms belonging to various customers were sitting on a shelf less than two inches from the height of the flood water and were nearly lost.

“I heard on Facebook that it was flooded downtown so I drove in around 11 p.m.,” Gary said.

He worked overnight to stop the flooding and clean up. But when he got home to try to get some sleep around 6 a.m., the tornado sirens started going again.

“I’ve been up for over probably 30 hours now,” Gary said.

After waiting for five hours on city crews, the Oplotniks took it upon themselves to clear the clogged storm water drain the alleyway between their business and North Block Common in order to relieve the flooding in their store.

“We lost a lot, but at least it was not the whole store,” Michal said.

Greg Melton, sales manager at Melton Ram Chrysler Dodge Jeep said that the dealership lost a handful of cars parked in their service department as well as parts that were stored on the bottom shelf.

“When vehicles get any kind of water damage in them, they’re gone. They’re done. It gets in the electric and engine and they are never the same,” Melton said.

South of the county courthouse, Higgins Law Firm and Smith Brothers Abstract were most impacted by early morning flooding.

“There was a two-inch waterline on the front door, and we know water came in and got in the foyer, the front office and down to the middle part of the office,” Higgins attorney Kevin Easley said. “We were pretty surprised because I know they just redid all the drainage out here on the road. We didn’t think we were going to have a problem, but apparently we did.”

“The water was all the way back in our building and there is mud all over the front. Everything was saturated,” said Smith Brothers Abstract manager Cindy Robison. “It was probably an inch to two inches of standing water at least.”

Most businesses were open Tuesday and all will be open Wednesday.