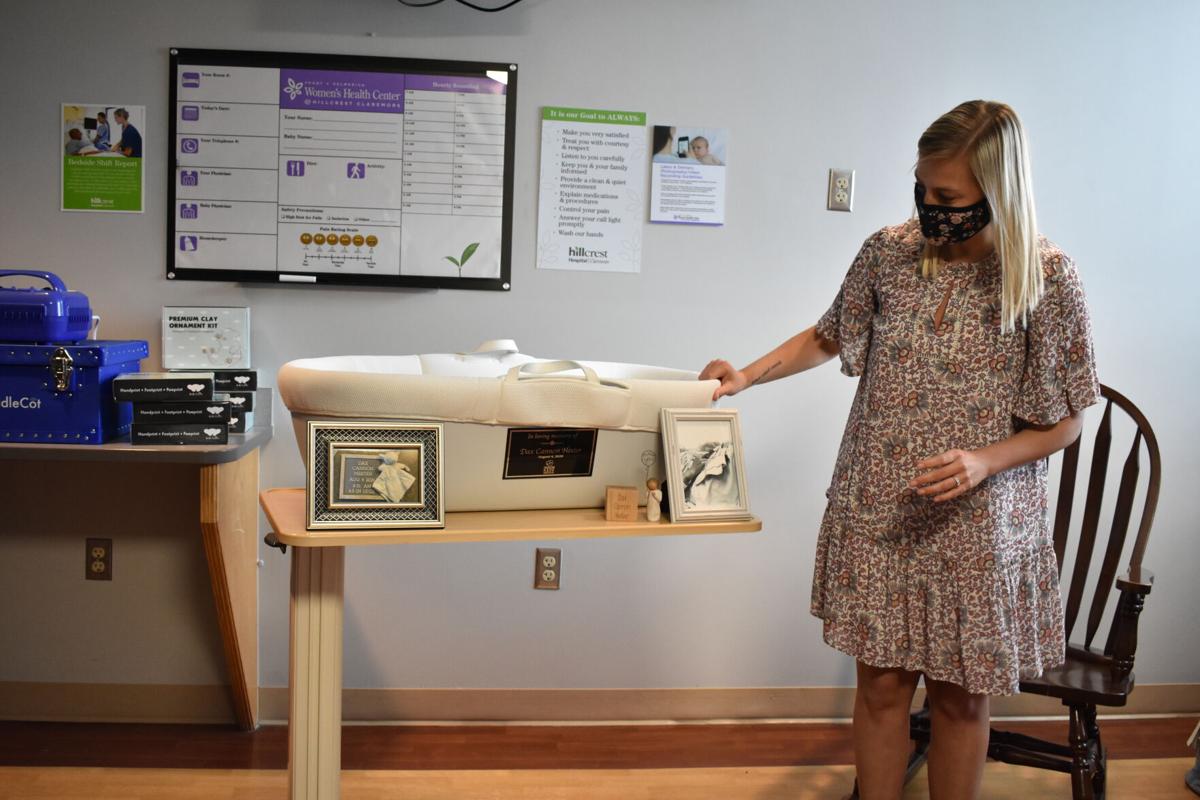 Taylor Hester looks at the Cuddle Cot donated to Hillcrest Claremore in honor of her son, Dax Cannon, who passed away. 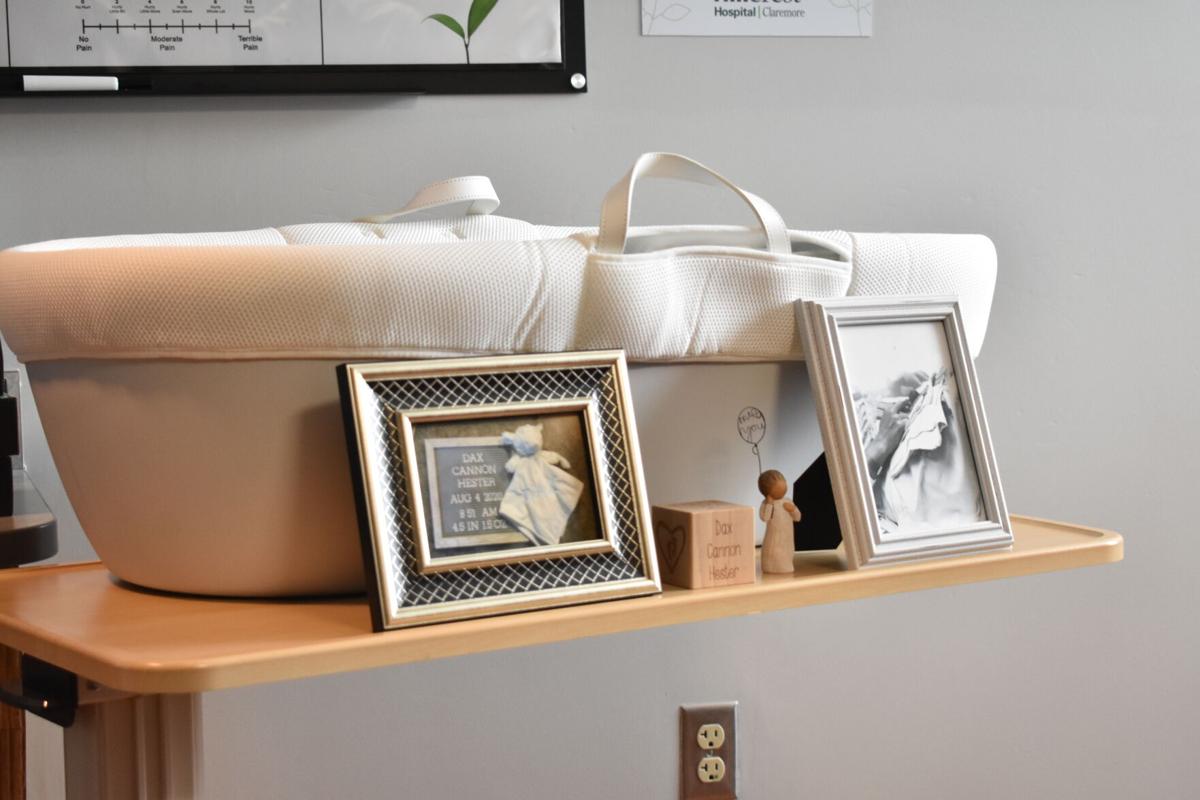 Cuddle Cot is a device that slows the decaying process so a family can spend more time with their lost infant. 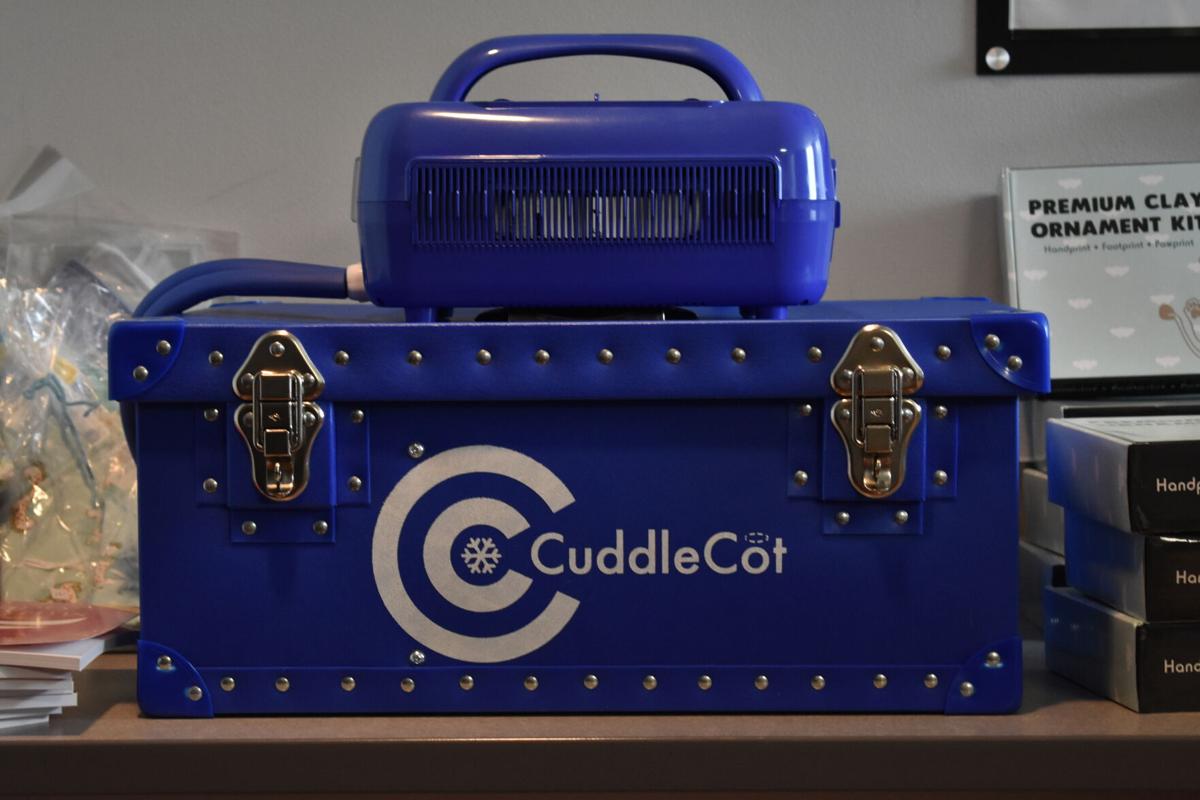 Cuddle Cot’s lower the body temperature of a baby by using cooling mat hooked up to a water unit. 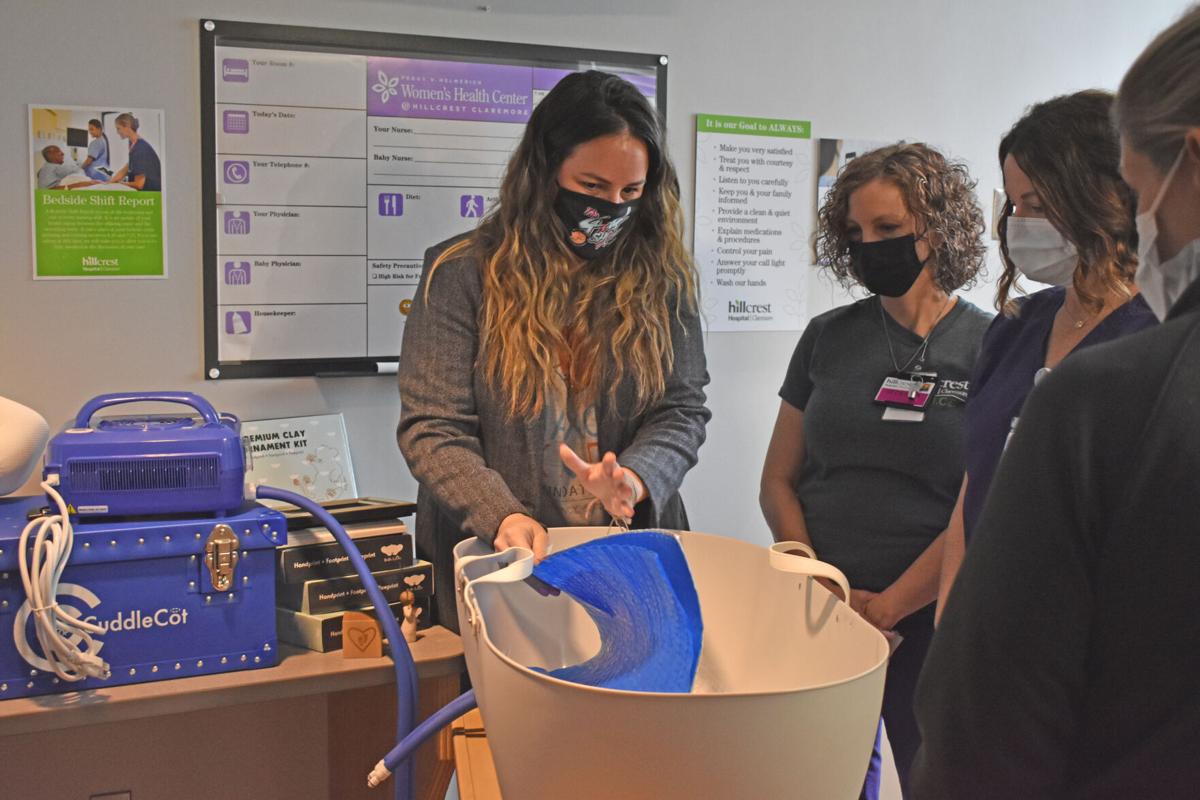 Jaxon Foundation President Brittany Martin show the Hillcrest Claremore labor and delivery staff how to hook up the Cuddle Cot.

Taylor Hester looks at the Cuddle Cot donated to Hillcrest Claremore in honor of her son, Dax Cannon, who passed away.

Cuddle Cot is a device that slows the decaying process so a family can spend more time with their lost infant.

Cuddle Cot’s lower the body temperature of a baby by using cooling mat hooked up to a water unit.

Jaxon Foundation President Brittany Martin show the Hillcrest Claremore labor and delivery staff how to hook up the Cuddle Cot.

It was during a routine checkup when Taylor and Stephen Hester received the worst news a parent could receive.

Taylor was 20 weeks pregnant with son Dax Cannon when she was told he passed away.

The Hesters were faced with a whirlwind of decisions they weren’t expecting. They decided to have Dax at Bailey Medical Center in Owasso.

On August 4 at 8:51 p.m., Taylor brought her son into the world and held him in her arms for the first and last time.

Taylor was told someone had donated a Cuddle Cot to the hospital.

“I was like ‘I don’t know what that is,’” Taylor said. “They told us that when he was born it was a cooling unit so the baby doesn’t decay.”

Taylor said the Cuddle Cot allowed them to spend the entire day with their son — holding him and saying goodbye.

“I’m just so thankful that you have provided this and made this available for families,” she said.

Taylor said they wanted to pay it forward and raise enough money so they could donate one to a local hospital.

“When we found out someone had donated, we thought we wanted to do this for someone else,” she said. “It’s pretty much the worst situation you can find yourself in. Getting to spend all day with your child that you’re never going to see again, it makes such a difference.”

The Hesters began a GoFundMe in August and raised $3,000 in less than six weeks.

“People were very generous,” she said. “It was overwhelming, the support we had. It did not take long to raise the money.”

Taylor found out about the Jaxon Foundation — a foundation that proves Cuddle Cots to hospitals — in a box of resources the hospital gave her the day she lost her son. She began researching to see what local hospitals didn’t have one — and Hillcrest Claremore was one of them.

“We just thought we could fill that need here locally,” she said.

A Cuddle Cot was donated to Hillcrest Claremore.

Kim Wiseman, Hillcrest Claremore’s OB Nurse Manager, said they are so thankful for the donation.

“This is a phenomenal donation,” she said. “I’ve worked at hospitals three or four times this size that doesn’t have this. Even if we use it once a month, it’s phenomenal.”

Wiseman has been an OB nurse for 25 years, she said she has worked at hospitals in the past with this device and has seen the impact it makes.

“It’s such a hard thing,” she said. “It’s really hard to take care of those patients. It’s heartbreaking as a nurse to see those families go through that grief. Having something like this to slow that process, so she can hold her baby for hours rather than minutes is huge.”

Wiseman said the decaying process is very rapid — sometimes the process has already started before the baby is outside the womb.

Wiseman said they deliver approximately 50-70 babies each month at the hospital.

Barbara Beans, Family Support Director with the Jaxon Foundation, said one out of four women lose their baby.

The mission of the foundation is to help other families who have lost an infant, whether it be because of miscarriage, stillbirth, or infant loss.

“We’re just a bunch of girls with a passion to help give parents time,” she said. “That’s all we’ve asked for is time. This is the only thing, the only gift we get when we lose our children.”

The Claremore Cuddle Cot donation is the 37th donation.

“We’ve almost got every hospital,” she said.

The Cuddle Cot works by lowering the body temperature of the baby. The device has a water-based unit that hooks into a cooling mat and can give a family up to seven days with their baby.

Brittany Martin started the Jaxon Foundation in 2016 after losing her son in 2014.

Martin went in for a routine induction and was told her baby had passed away.

“The whirlwind of things that happened that day were too much for me,” she said. I didn’t know what decisions needed to be made, I didn't know anything from as little of am I supposed to hold my baby? Can I be sad? Is it time to plan a funeral? Just all kinds of decisions that were thrown at me that day that I wasn’t prepared for.”

Martin said she has a lot of regrets from that day and wanted to help other moms and give them extra time.

“I only had 90 minutes with Jaxon and that’s because I could not handle the decaying that happens so quickly with little babies,” she said. “I wanted to remember my son the way he was. Beautiful. It just broke my heart to watch that happen.”

Martin said she found the device online in the United Kingdom and wanted to help provide it for other families.

“They have to go through something that’s tragic,” she said. “And if we can bring something that helps just a little bit, that’s what we want to do.”

Martin said the foundation has led her to meet many families who have lived through the pain of losing a child — just like the Hesters.

“I just hope that, if anyone has to use this, that they will just feel the love and support of the community that we felt,” Taylor said. “It just makes such a difference. I can’t even explain it. Unless you’re in that situation, you can’t really feel how great of an impact that made.”

Taylor said not only did they want to be able to donate a Cuddle Cot, but they also wanted to raise awareness.

“You just don’t think of babies passing away before they’re born,” Taylor said. “And so we’re trying to raise awareness and let people know it’s okay to open up about it. You don't have to do it all by yourself.”