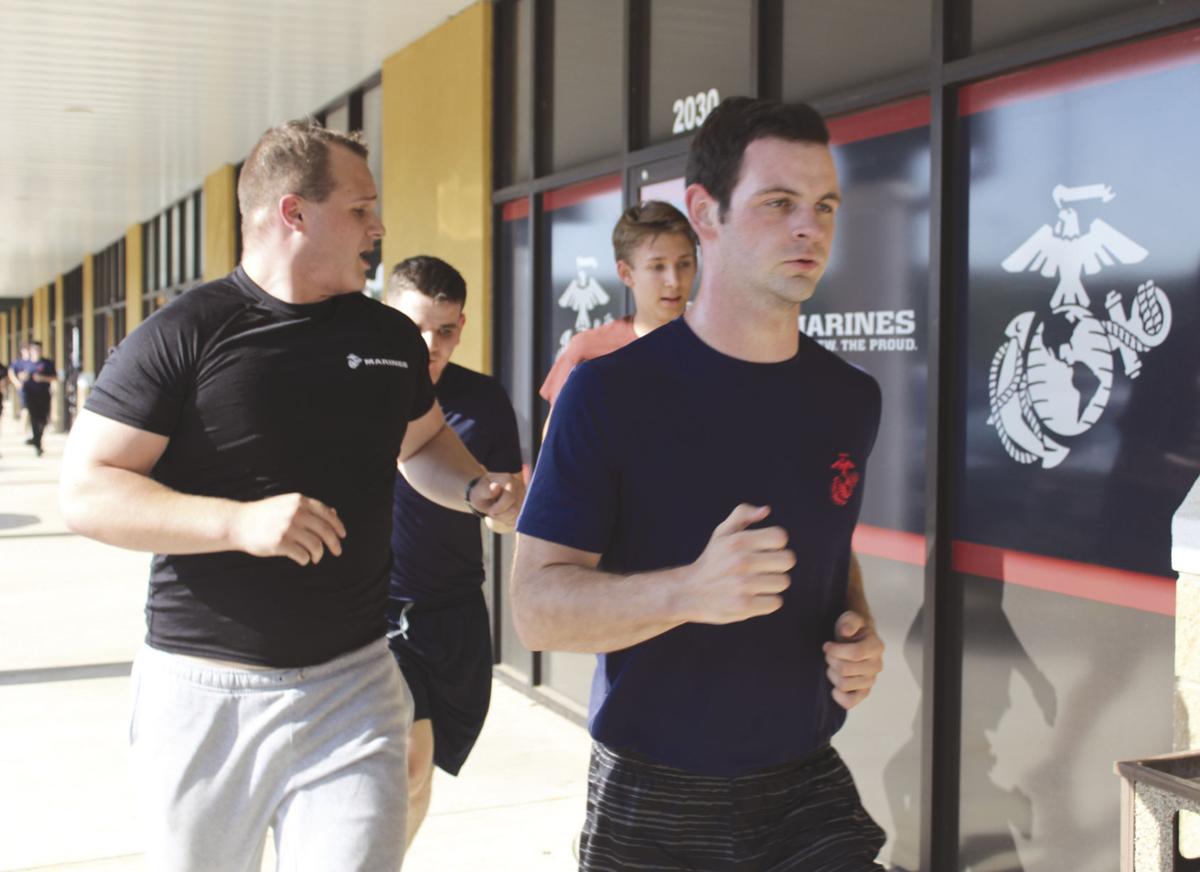 U.S. Marine Corps Sgt. Raymond Branam (left), encourages a group of young men who have either enlisted or are considering enlisting in the Marine Corps to work on their physical condition in preparation for boot camp. 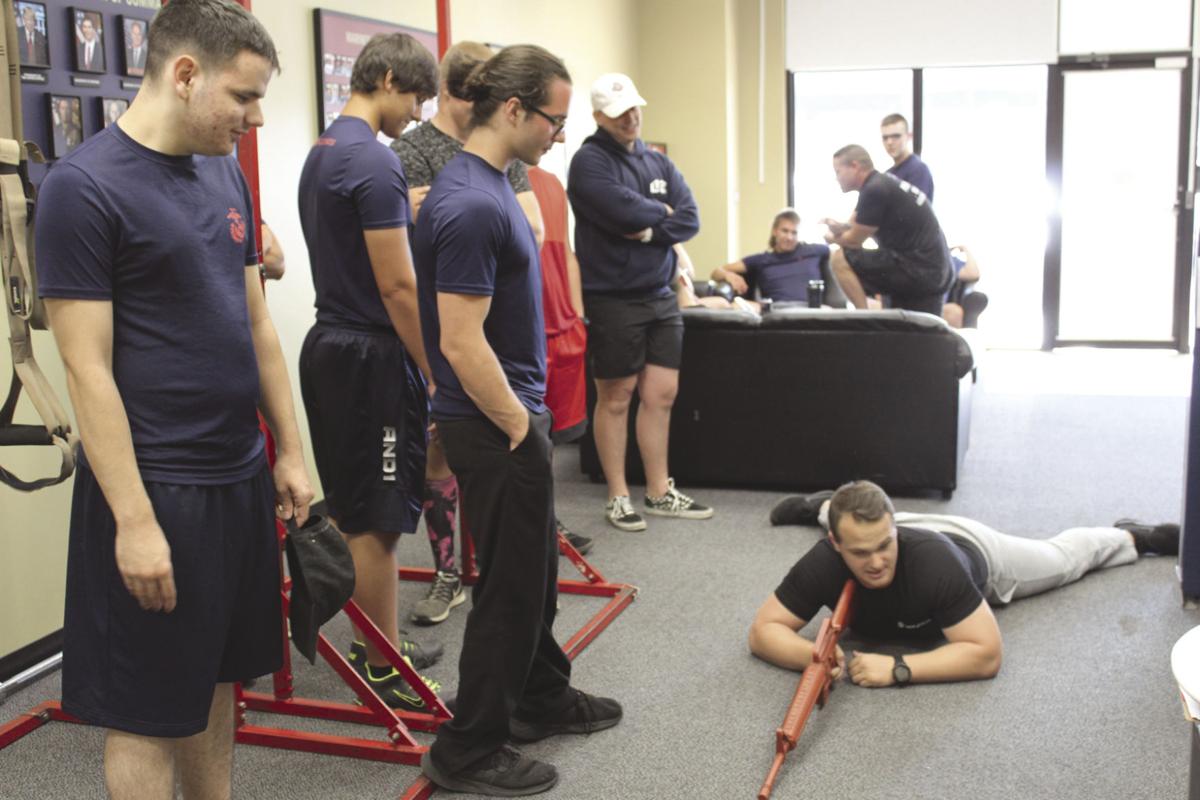 Raymond Branam joined the United States Marine Corps on March 4, 2013. After an accomplished military career he returned home to Claremore to serve as the recruitment officer.

U.S. Marine Corps Sgt. Raymond Branam (left), encourages a group of young men who have either enlisted or are considering enlisting in the Marine Corps to work on their physical condition in preparation for boot camp.

Raymond Branam joined the United States Marine Corps on March 4, 2013. After an accomplished military career he returned home to Claremore to serve as the recruitment officer.

After visiting Japan, Thailand, the Philippines, Australia, New Zealand and Madagascar in the course of his military career, Claremore Marine Corps Sgt. Raymond Branam has returned, following in the footsteps of his mentor.

Formerly an ammunitions chief with the 31st Marine Expeditionary Unit, Branam now serves as a recruiter, encouraging young men and women to consider a future in the United States Marine Corps.

Branam’s journey began at the start of his senior year at Claremore High School.

“I was going through a lot of stuff,” Branam said.

He had good grades, but a lack of direction. He was good at sports, but had a medical mishap that prevented him from going further than high school athletics.

“I wanted to attend college, but I didn’t want to put my family through the financial burden that it took to become a college graduate,” Branam said.

Early on in his senior year, Branam met Marine Corps Sgt. Patrick Flynn, now retired, while they were both working out at the Claremore Recreation Center.

“He saw me lifting, trying to get strong, and asked me if I wanted to by a United States Marine,” Branam said. “Like any other 17 or 18-year-old punk kid, I laughed at him. I told him, never in a million years, would I ever become a Marine.”

Flynn just smiled and said, “Yeah, you probably couldn’t do it anyway.”

“Two hours after I finished my workout I was inside of his office, and he sold me,” Branam said, adding that the office was then located at the intersection of Highway 66 and Will Rogers Boulevard, where CVS is now.

The camaraderie, the challenge, the opportunity to help people all over the world, those were the major selling points.

“We are the nation’s 911 force, and the idea of helping someone, no matter who they are or where they are really spoke to me,” Branam said.

From their meeting in 2011 until after Branam joined the Marine Corps on March 4, 2013, Flynn stayed in touch with Branam and kept him accountable for his grades, behavior, and physical fitness. Flynn helped Branam go from weighing over 300 pounds to 198 on the day he left for boot camp.

“He became my big brother, my mentor,” Branam said. “He’s a marine’s marine … He spoke very softly. He was very firm and fair. He exemplified not only what a man should be, but what a marine should be. And that’s what I strive to be.”

Starting out in the marines, Branam was stationed in Okinawa, Japan.

As a member of the 31st Marine Expeditionary Unit, Branam travelled all over the Pacific Ocean, giving humanitarian aid and providing cross-training for other military services.

As the ammunition chief, Branam was responsible for ensuring that his unit’s explosives and ammunition were all accounted for across three different ships.

When the Philippines suffered a massive super typhoon in 2013, Branam was part of the U.S. deployment that provided water, medicine and food and rebuilt hospitals, bridges, houses and schools.

“We got their economy and infrastructure back up to par so they could continue their everyday life,” Branam said. “In short, we are a force in readiness to enact the will of the Commandant, our highest ranking officer, and the President of the United States.”

“The drive, for me, was to help people in need, who needed it,” Branam said. “It wasn’t asked for, it wasn’t expected … If someone was in need or in danger, I wanted to step in. A sword for the wicked and shield for the weak.”

Branam said his desire to help people was a trait he learned from his father.

“I came from a big family, lots of brothers, lots of sisters, and my father always pushed me to be strong, to be the man,” Branam said. “It meant more to me, to make him proud.”

When Branam talks to teens about joining the Marines, about their fears and concerns, he hears a lot of the same points.

“Marines die. Marines step into the line of fire and don’t have long life expectancies. My grandfather was in Vietnam and because of chemical used during the war, he’ll never be right again. Or, a big one is the military is too hard or too scary , especially the marine corps,” Branam said.

In response, Branam points to hard facts. For example, the chance of seeing combat is roughly the same in every branch.

“In seven and a half, almost eight years, I have never been deployed to a combat zone,” Branam said.

Another common concern is the cultural belief that only poor, stupid kids join the armed forces.

“A lot of young men and women have been misinformed that the military is strictly for bottom of the barrel, what I like to call rock-eaters,” Branam said. “But we have recruiters here who have several degrees. We have men and women in this office who have served 17 plus years leading marines all across the world.”

As a recruiter, Branam hopes to offer the same mentorship he got from Flynn, giving students a chance to sit and talk, ask questions and get straight-forward answers and guidance.

“I wanted to breathe life into people who saw no hope in their future,” Branam said. “Being from Claremore, graduating, and due to some circumstances, not being able to attend the college of my choice, I felt hopeless, lifeless, vapid.”

“I wanted to be the one who could step in and offer someone a hand, and even if the marine corps wasn’t an option for them, point them in some direction,” Branam said. “I wanted to come back to my home town and offer anything I can offer.”