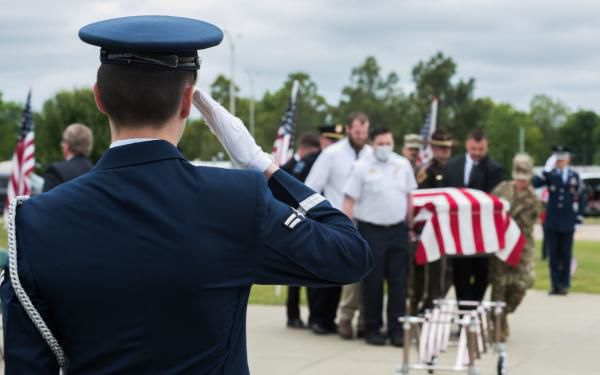 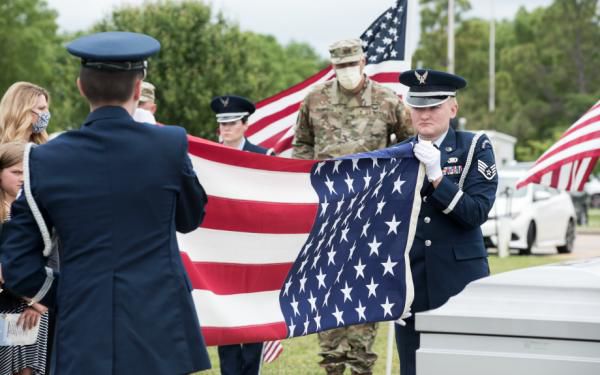 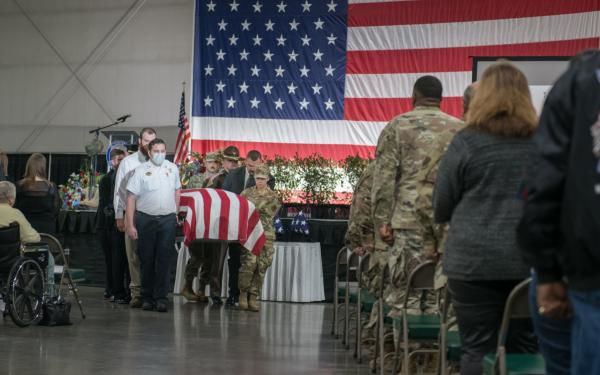 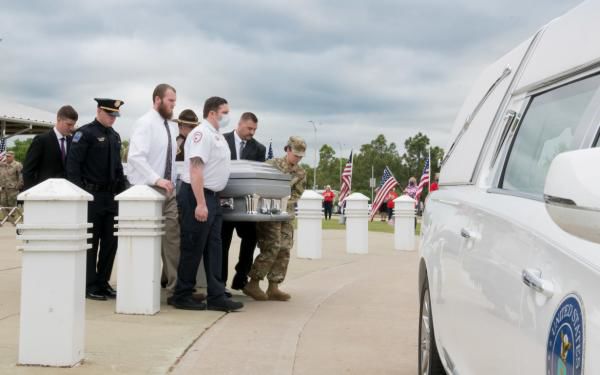 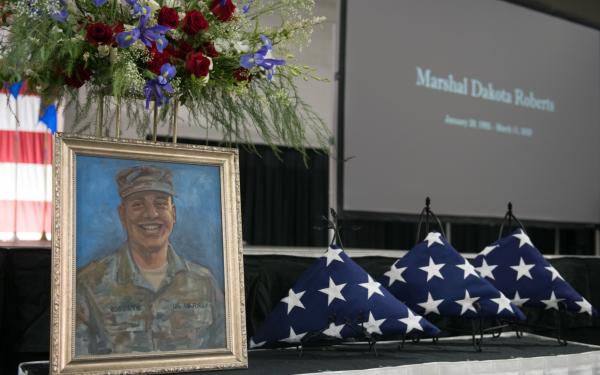 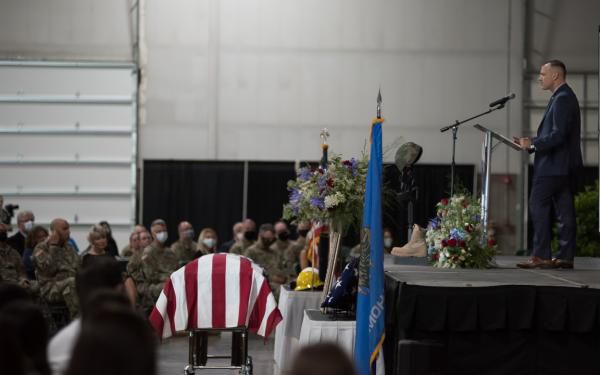 Roberts died on March 11, 2020, at the age of 28, from injuries sustained during a rocket attack while deployed to Iraq in support of Operation Inherent Resolve.

“We’re here today to celebrate the life of Marshal Roberts, the first Oklahoma Air Guardsman to be killed in combat, and his is a life certainly worth celebrating,” Hildebrant said. “On behalf of the family, I want to welcome you all today to honor him and grieve with the family as well.”

Hildebrant spoke about several life lessons that Roberts had taught those who knew him, one of which was love through sacrifice. He explained that Marshal was the kind of person who would always put others before himself, and that his last act on earth was to put another’s well-being before his own, even at the cost of his own life.

“The night of Marshal’s death, when the rockets where coming in, he took cover with a friend. As they heard the commotion, they discussed running to a bunker for cover,” he said. “Not knowing if they would make it, Marshal told his fellow Airman to go and get her [body] armor on. As that friend went and got her [body] armor on, the rocket landed. Marshal lost his life that day, but heroically, he saved another.”

“Marshal joined the Oklahoma Air National Guard in 2014,” Hale said. “He proudly served in the Air Force, and the members of the 138th Fighter Wing and the 219th [Engineering Installation Squadron] are all the better for having had the privilege of serving with him.”

While reading the obituary, Hale explained that Roberts was raised in the Owasso area and graduated high school in 2010. He said Roberts embodied courage and spirit, noting that he always placed God and others before himself.

“If ten people came to him and needed help, he would find a way to help 11, no matter what it took,” Pate said during the eulogy. “He never expected anything in return, and was loyal beyond imagination. If you were lucky enough to call him friend or family, you could call him that for life.”

Pate explained that Roberts was known by many names to a lot of people, including husband, father, son, brother and friend, but that he was most proud of being a husband and a father.

“Whenever he would talk about [his wife] Kristie, or [his daughter] Paityn, the look on his face was amazing,” Pate said.

Following his death, Roberts was posthumously promoted from the rank of staff sergeant to technical sergeant, which is the rank held by the organization’s technical expert. They continuously strive to further their development as technicians, supervisors, leaders and mentors through professional development opportunities.

During the promotion ceremony, Col. Robin Cavanaugh, 138th FW, spoke on the enlisted force structure and what it means to be a “tech sergeant.” She spoke on a few key points mentioned in the promotion order to highlight how they related to Roberts, including the words special trust, confidence, qualities and demonstrated potential.

“Marshal had the utmost trust, not only from me but from his leadership, peers and subordinates,” Cavanaugh explained. “He was a trusted confidant. I had the utmost confidence in Marshal and his ability to perform…not only at a technical level, but far beyond. He was an exceptional Airman. He was often the calm voice of reason and embodied the whole Airman concept, always striving to improve himself, not only professionally but personally and spiritually. He was a mentor and a friend to everyone he came in contact with. I had zero doubt that Marshal could have accomplished anything, enlisted or officer, that he set his mind to.”

The service concluded with the 138th FW Honor Guard performing a flag ceremony, Taps and a three round volley, as well as an F-16 flyover performed by the 125th Fighter Squadron, 138th FW, in honor of Roberts.

“The character of Marshal Roberts on the evening of March 11 was of sacrificial love,” Hildebrant said. “And Jesus tells us in the Gospel of John that ‘Greater love has no one than this: to lay down his life for his friends.’”

After the memorial, Roberts’ funeral procession took him to Floral Haven Funeral Home, driving down streets lined with members of the community, American Flags and signs in honor of the ultimate sacrifice he made on March 11, 2020.