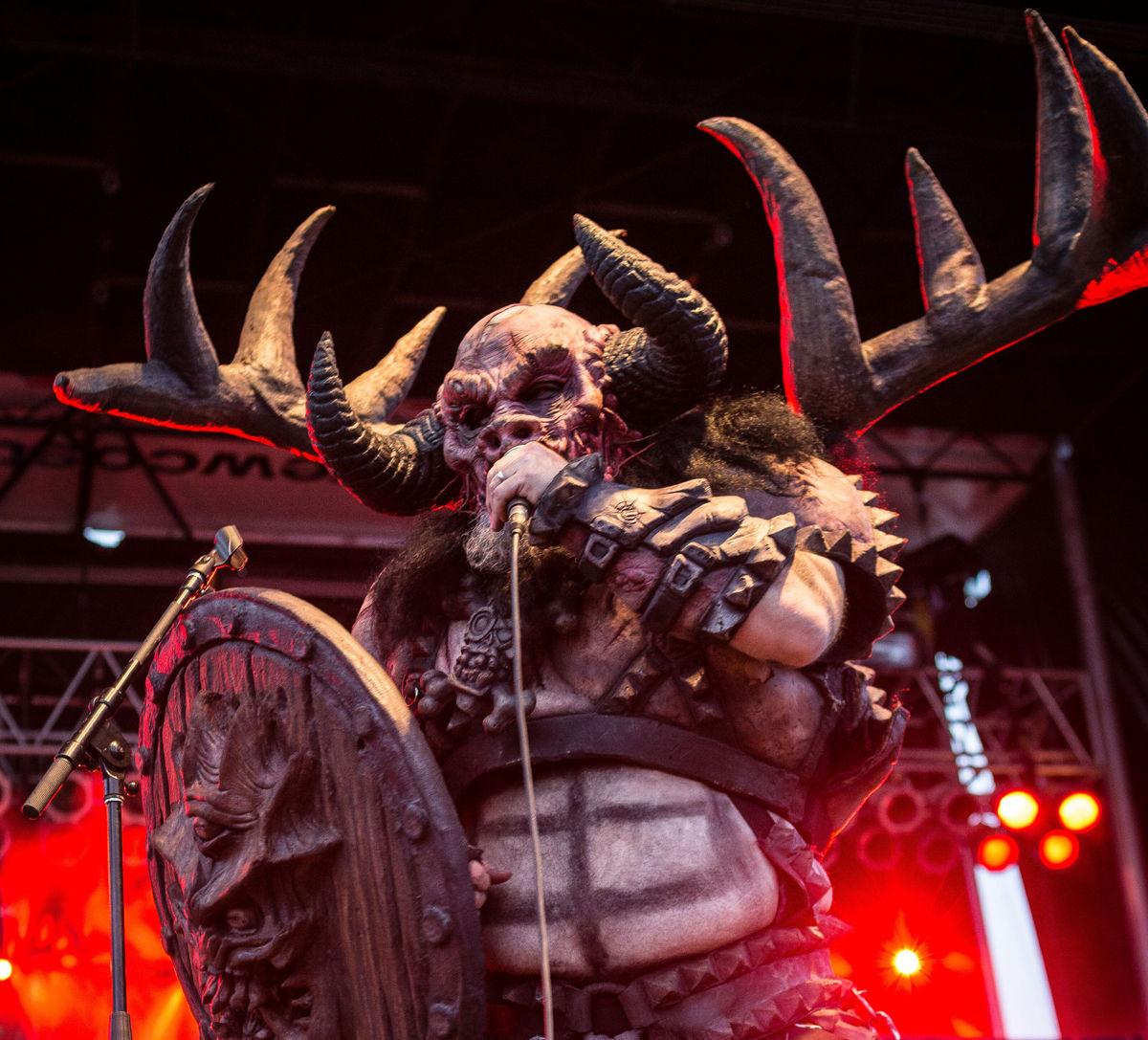 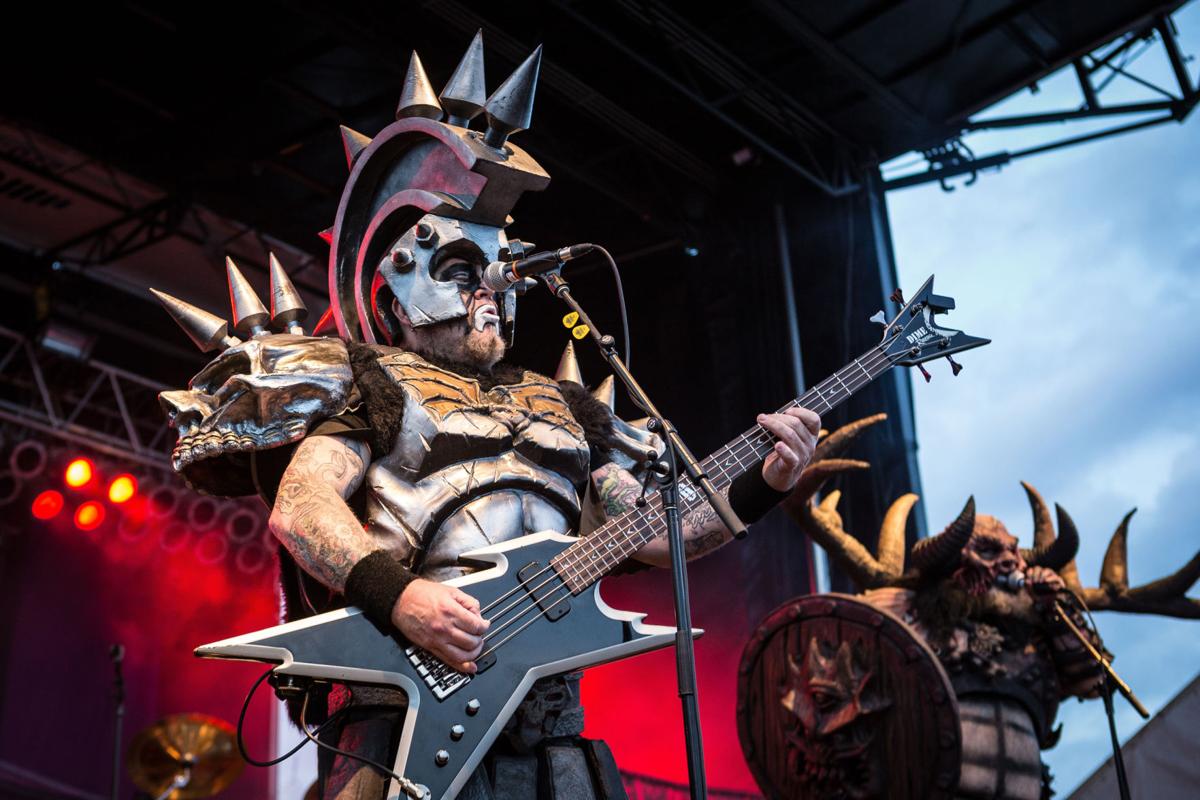 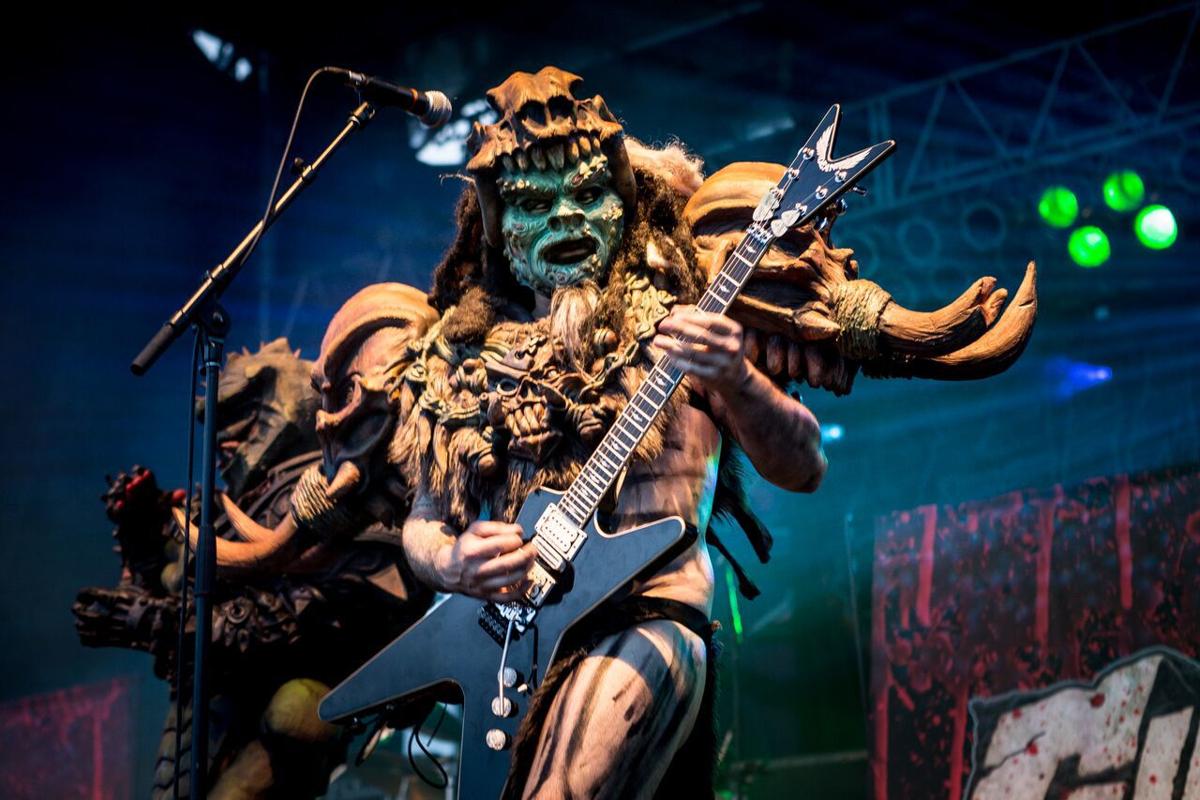 Pressed against the metal barriers, wide-eyed fans screamed in delight as blood splattered across their face.

This is a Gwar concert.

There was no shortage of pseudo-blood, guts, gore and political statements during Gwar's Rocklahoma performance this weekend.

They may be the grossest band in metal, known for decapitating or disemboweling likenesses of the president on stage, but their fans wouldn't have it anyway other way.

In the days before the show "Pustulus Maximus" gave insights into the twisted minds of the band and how they became who they are.

With Gwar, it's a revolving door between the satirical and sincere.

Their unashamedly irreverent style is what has drawn fans to the band since their 1984 creation.

"We've been up to a lot of no good, as always," Maximus said, adding that Gwar is gearing up for a fall tour in which he assumes the band "will go broke in Europe and have to hi-jack a plane to get home."

"And there's talk of a record in 2020, so we've been in the writing phase for the past few months. And that has been going surprisingly well," he said. "We've had no lacerations, cuts or bruises to the other members during the writing process and I feel like that is a vast improvement over the massive amount of broken bones and hurt feelings that we had during the process of the last one."

Gwar has had a long string of bad luck since 2014.

They've paid homage to two lost brothers and struggled to overcome the hands they were dealt.

"This time it's more or less a fresh start that we can focus on being us. Gwar has always been Gwar, but now the gloves can come off. We can be more humorous or satirical, he said.

"This new album, I don't want to call it a return to roots, but it will definitely be a departure from the Battle Maximus and Blood of Gods. You'll see something a little different. Gwar is ever-evolving, so it will be what it is. Hopefully it will be neat."

When asked if there's any subject matter that's off limits, anything they think is too far, Maximus laughed.

Not really, he said.

"I think the mere existence of a band like this truly flourishes by not refraining from what really goes on in the world. We might not be experts in the inner-workings of the circles of power that control everything. But we're not oblivious to what goes on in daily life. People like religious leaders and politicians masquerade as heroes when behind the scenes mostly are self-serving or using positions or titles as a mask to cover their true desires and wants…. with politicians its money and power and securing wealth for their bloodline," he said.

"And Gwar is there to destroy all this and to expose it."

He recalled a time when Gwar had the likeness of the corpse of JonBenet Ramsey on stage:

"Most kids in this generation won't remember what was going on at that time. But we wanted to shine a magnifying glass on child pageantry and expose the dark parts of its existence that nobody wanted to bring attention to. There's more to the story than the death of the child. There's a lot of darkness surrounding the people involved as well as the parents and the atmosphere at hand. That's just one example of many where Gwar is truly a purveyor of justice and all things good."

While he didn't divulge too much he said it boils down to the systems run by those in power, meant to keep others powerless.

"They want to make you dependent on a system, on them as providers," he said.

While clearly the world needs Gwar's unique brand of political activism, Maximus shared why the music industry needs them as well.

"So, I had a Ouija board out last night and was conversing with Frank Zappa and he had said something many years ago that when the guys in suits with cigars were making these calls about letting these records out, they released a lot of odd sounding music. A lot of those early ones that were ground breaking were a guy in a suit that knows nothing about music taking a risk and letting something come out into the world and the listener can make the decision on whether they like it or not," he said. "Now you have all these hip, cool guys…It really boils down to a lot of the record industry is old dudes assuming they know what the kids want so they sign these bands that are horrifically bad and they shove them down the throats of our nation."

He said metal is near and dear to many music fans because of how it's discovered. The feeling of an underground.

"You had a personal relationship with the bands you heard about because you had to seek them out to find them. Now with the internet and the way record labels function, they want to remove that choice, that search. They want to hand you a plate with a bunch of feces and tell you it's actually really good and you eventually get accustomed to liking it," he said.

Maximus laughed and added, "As much as we'd like to sell out, we can't. We're not commercially viable."

When asked what fans can expect at a Gwar show, Maximus simply said, "Fans can expect to be disappointed beyond their wildest dreams."

He added, "We've never held back. And that is what Gwar can give you that no one else can."