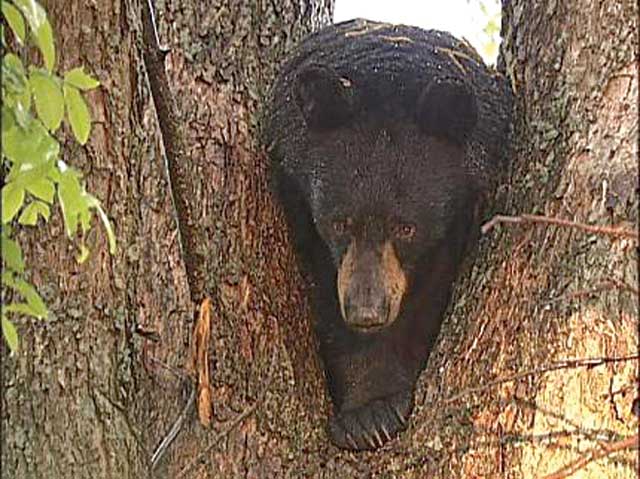 A black bear was treed early yesterday morning at a Foyil residence. 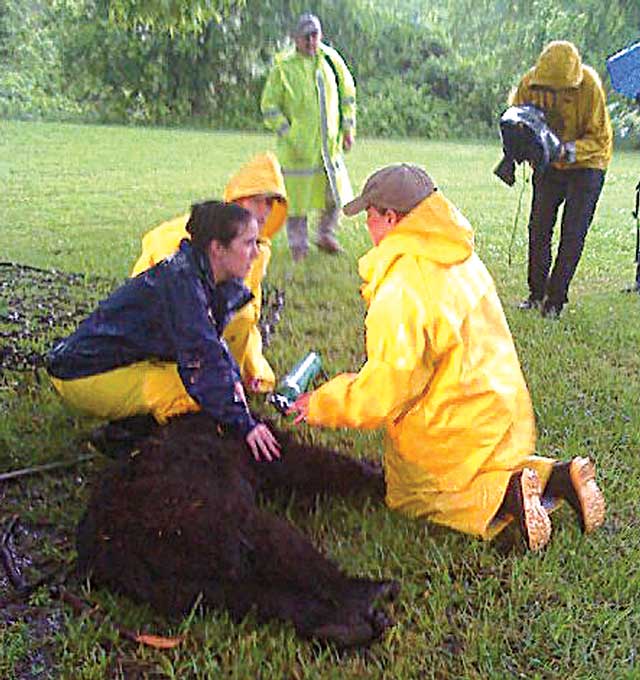 A 175-pound black bear was stuck in a tree in the backyard of Rogers County woman Sue Dulaney Wednesday morning. Neighbors, Rogers County Sheriff’s deputies and even Dulaney’s own dog’s kept watch on the well-behaved bear, while animal experts arrived. He was tranquilized, treated for ticks and worms, and later transported to an undisclosed location to be released into the wild.

A black bear was treed early yesterday morning at a Foyil residence.

A 175-pound black bear was stuck in a tree in the backyard of Rogers County woman Sue Dulaney Wednesday morning. Neighbors, Rogers County Sheriff’s deputies and even Dulaney’s own dog’s kept watch on the well-behaved bear, while animal experts arrived. He was tranquilized, treated for ticks and worms, and later transported to an undisclosed location to be released into the wild.

For Foyil woman Sue Dulaney, waking up to the sound of her dogs barking is nothing new.

The “mother” of three dogs — German shepherd “Rocko,” Dalmatian “Bobo,” and German shorthair pointer “Wags” — Dulaney has been roused from a deep sleep more than once by her four-legged alarm clocks.

But yesterday morning was different.

“Dogs have different kinds of barks — a bark for this, and a bark for that, and when you’ve owned one long enough, you get to know what the different barks mean,” said Dulaney, “and Wednesday morning, I could tell their barks meant something was up — something big.”

Nearly 200 pounds big, actually, as Dulaney’s dogs had discovered an early morning intruder in the backyard — a 175 pound black bear.

“It was maybe just a little after 5:30,” she said. “Rocko started barking, and it was a different kind of bark for him — very intense, very serious. Bobo ran out the dog door and Wags followed, but came back into my room and hopped back on the bed and started barking.

“And barking, and barking,” she said. “She wasn’t going to stop barking until I got up, so I finally thought ‘Okay, I’ll get up — WHAT could it be?’”

It didn’t take her long to find out.

“I went out on the deck and could still hear Rocko barking and something else — even in the dark, I could tell there was something going up the pecan tree in my backyard, about 50 feet off my porch,” she said. “At the time, I thought it was maybe a big raccoon or a bobcat — we have those, so I thought ‘Okay, let’s take a look.’

“So, I got my flashlight, a high-powered one I call ‘The Beamer,’ and went to the tree, not directly under it, but shining the light up into the branches and along the trunk,” she said. “As soon as I saw it, I realized it was no raccoon — it was a bear.”

Surprised but not panicked, Dulaney called the Rogers County Sheriff’s Department to inform them of her ursine intruder.

“That was certainly the kind of call we don’t normally get,” said Peggy King, dispatcher, Rogers County Sheriff’s Department. “I wasn’t on shift myself when the call came through but as far as I know, that’s the first time we’ve ever gotten a report of a treed bear in someone’s backyard. I’ve worked in law enforcement for 35 years, nine here and the rest in Mayes County, and I’ve never gotten a call like that — it was a first for us, certainly not the kind of call you’d expect.”

Within minutes, Dulaney’s backyard was filled with neighbors, law officers and more, all looking upward at the treed bear.

“(Neighbor) Leon Walker got here first, with his high-powered hunting rifle, then the rest of my neighbors — John and Katie Baldwin, Carl Martin. We could have had a neighborhood picnic, there were so many people,” she said.

Although Dulaney put Wags and Bobo in the house, she allowed Rocko to stay outside, standing guard at the base of the tree, while help arrived.

“Annette Tucker (from Wild Heart Ranch Rescue and Rehabilitation) came out and really helped get everyone together,” she said, “and there were even crews from Animal Planet were here with Ned Bruha, the Skunk Whisperer — I must have had at least 50 people or more out in my backyard, watching the bear.”

Despite the growing crowd and his predicament, the bear took his situation in stride.

“He was a real ‘Gentle Ben’ kind of bear — he didn’t growl or act agitated or anything, he just hung out and stayed pretty calm, considering,” she said. “I was a little worried when it started to storm — thinking the thunder and lightning might spook him, but it didn’t.”

Eventually, Tulsa Zoo workers arrived on then scene and tranquilized the bear, causing it to drop from the tree.

“Dr. Kay Backues, head veterinarian from the Tulsa Zoo, was there with three of her vets,” said Annette Tucker, Wild Heart Ranch. “She darted him, and once he was down, they checked his vitals to make sure he was uninjured and healthy, then they treated him for ticks and worms.”

Following the examination and treatments, the anesthetized bear was handed over to a game warden and bear handler from the Oklahoma Department of Wildlife Conservation, who transported him to an undisclosed location and released him back into the wild — far away from populated areas, and people’s backyards.

“It was really the best possible outcome for everyone  — no one was hurt, the bear wasn’t injured, and he didn’t have to be put into captivity or euthanized,” Tucker said.

As for Dulaney, she’s just equally grateful for the bear’s safe capture and release — somewhere else.

“All things considered, everything actually turned out all right, and it’s even sort of a happy ending for Mr. Bear,” she said. “I hope he lives happily after — just not in my backyard.”

Editor’s note: Animal Planet is currently working with Ned Bruha and Annette King Tucker on an upcoming series, “The Skunk Whisperer.” The events of Wednesday morning will be incorporated into an episode.