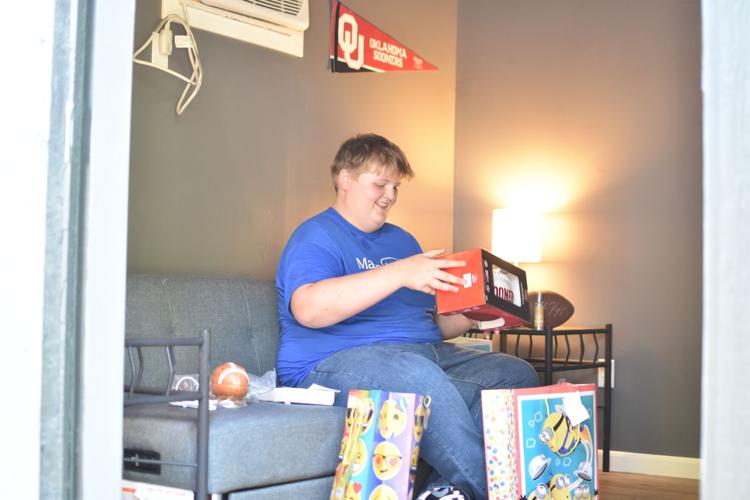 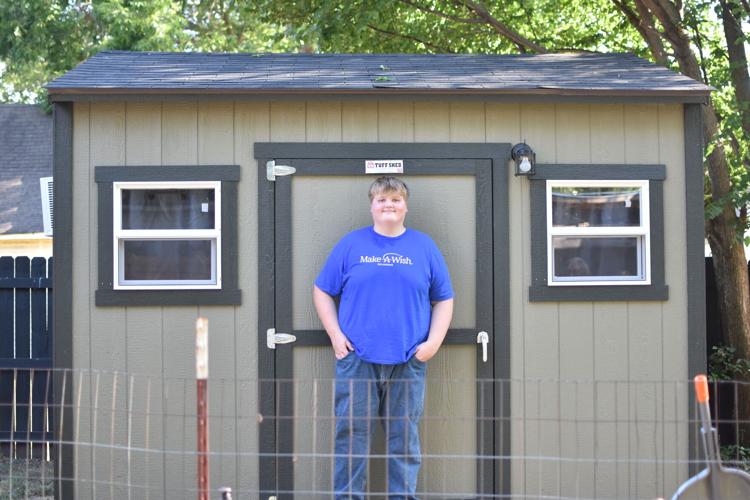 Connor Hopper and his family received heavy news two weeks after his 12th birthday. He had Acute Lymphoblastic Leukemia and was considered high risk because of his age.

“He went through a lot,” his mother Courtney Hopper said.

For two and a half years, Connor went through chemotherapy treatment. The Hopper family would be at the hospital three to four times a week and stay for 10-20 days at a time.

“You had to for whatever treatment you were getting at the time,” Courtney said.

Connor finished his last round of chemotherapy June 1, 2021, and has been cancer free for a year.

Equipped with a futon, A/C unit, a television and many Sooner football decorations, Make-A-Wish granted Connor's wish of having a “man-shed.”

“I'm really thankful for it,” Connor said. “My friends are definitely gonna love it. I really liked it. That's pretty cool. I really like it.”

Connor – now 15 years old – said he looks forward to having a place of his own.

Make-A-Wish volunteers Debra and John Blackwell also were able to get Connor a football signed by University of Oklahoma football players.

Make-A-Wish reached out to the Hopper family in 2020 and planned to go to Disney World, but the COVID-19 pandemic hit, halting those plans.

Courtney said a lot of things changed in two years, and he grew up and needed a space of his own.

“You know, a trip lasts for a week,” Connor said. “I mean, you have the memories of it, but I wanted something that really would last for a while.”

Courtney said they’ve been working on the “man-shed” for a couple months.

“He just needs a hot plate, and he won’t come out,” she said.

Hurt said Connor has worked really hard in the offseason to get back into football shape.

“He joined us after Christmas and has just really blossomed,” he said. “[He] has really made some great strides in the weight room and in his conditioning.”

It was a Monday after school in 2018, when Connor woke up from a nap and felt like he was having a heart attack. They rushed to the emergency room for testing when they discovered he had a low blood count, Courtney said.

That evening, they were sent to the St. Jude’s Children’s Hospital where the doctors told the family they would be testing Connor for cancer, Courtney said.

Courtney said the symptoms of Acute Lymphoblastic Leukemia include bruising and lethargy.

“We just thought the bruising was because he was just the lineman and going hard,” she said.

Courtney said they were in and out of the hospital for 10 months – a long process that affected the entire family and overall tightened their bond.

“It was a long two and a half years,” she said.

She said the staff and the doctors helped ease her fears and concerns.

“I'm very thankful, because when you're first going through that, it's just you have no hope or no foresight to see what's going to happen,” she said.

Whether it was monetary donations or food trains, Courtney said the outpouring of love and support from the community was also amazing.

“The outpouring of love from the community has just been really good,” she said. “And, you know, makes you appreciate people a little better.”

Debra and John Blackwell have been volunteering with Make-A-Wish since 2017. Debra said they’ve been able to grant the wishes of eight to nine children in 2022. Whether it was shopping sprees or Disney World trips, Debra said it’s a special feeling to see a wish granted.

John said they still keep in contact with some of the kids.