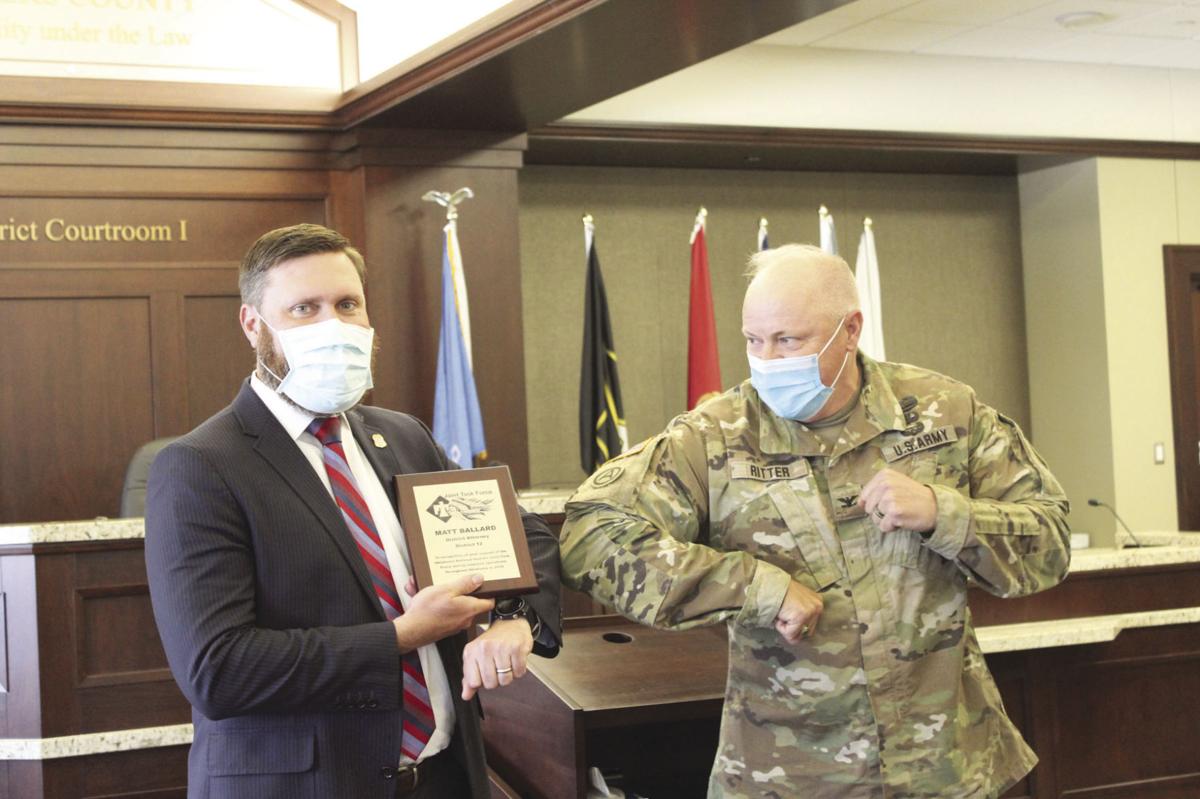 Col. Scott Ritter gives District Attorney Matt Ballard an elbow bump in lieu of a handshake during an awards ceremony in which Ballard was recognized for support of the Oklahoma National Guard’s Joint Task Force. 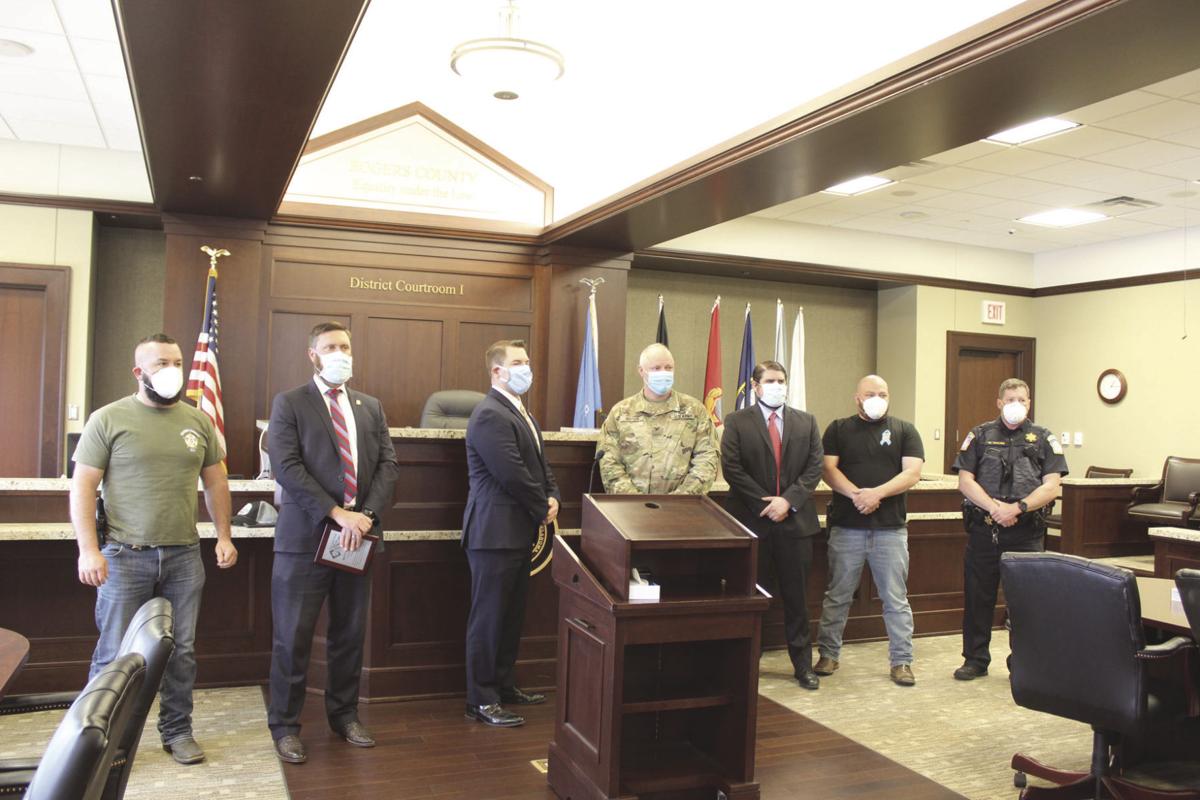 Former and current military personnel who work in or with District Attorney Matt Ballard’s office made a show of support during the award presentation.

Col. Scott Ritter gives District Attorney Matt Ballard an elbow bump in lieu of a handshake during an awards ceremony in which Ballard was recognized for support of the Oklahoma National Guard’s Joint Task Force.

Former and current military personnel who work in or with District Attorney Matt Ballard’s office made a show of support during the award presentation.

The award reads, “In recognition of your support of the Oklahoma National Guard’s Joint Task Force during response operations throughout Oklahoma in 2019.”

“Since about March 16, myself and upwards of 400 guardsmen, both Army and Air, have been doing emergency response all across the state of Oklahoma,” Ritter said. “Working in food banks, doing national stockpile distribution, decontaminating long-term care facilities.”

Often included on those missions is 20-year, decorated combat veteran of the U.S. Army and now Army National Guardsman Isaac Shields, who works as the chief prosecutor of the criminal division for District 12, under Ballard.

In 2019, Ritter and Shields were responding to northeast Oklahoma’s historic flooding.

“With Guardsmen, you think we’re there as the strategic reserve for winning wars, but the other thing that we’ve done, for over 360 years, is responded to the states when they are in crisis and need assistance,” Ritter said. “We respond for Oklahoma, probably more than 48 other states in the nation … It’s not always as big as a pandemic or a flood, but there are wildfires, tornadoes, ice storms, throughout the year, and we are responding to quite a bit.”

Ritter said that every time they have called for Shields to manage one emergency or another in his year and a half in District 12, Ballard let him go without incident, and left the job waiting for him when he got back.

That is why Ballard was honored with a short ceremony and a plaque, Ritter said.

“It’s a small token,” Ritter said. “It never gives justice to what a family or employer gives up to help fellow Oklahomans in need, but we certainly appreciate it.”

Accepting the award, Ballard said, “I can’t say how much it means to me just to be recognized for something like this. Honestly, I feel a little funny accepting it because I don’t think I’ve done anything that a responsible employer wouldn’t do.”

“Isaac, you’re the one out there responding to things, spending your weekends, your weeks, your time away from your family, doing the hard work on the front lines,” Ballard said. “I appreciate people like you that are out there making a difference, and making sure that when disaster happens, whether it’s a pandemic or a flood, whatever it is, that you are out there, away from your family, and putting your life on the line.”

After Ballard spoke, Shields added his own appreciation for his boss.

“The first time I went to war, I had very little notice, you just have to drop what you’re doing and go,” Shields said.

In the dozens of other deployments Shields has had sense, the amount of notice is still the same.

“When there is a war, people understand,” Shields said, “but it’s the little day-to-day things, where an employer is really at a loss whenever it is a week here or a week there, a month here or a month there. It’s that, in the aggregate, where a lesser employer or a lesser individual would be saying, ‘why am I doing this?’”

“Matt, in the year and a half I’ve worked for you, I’ve been gone for a week here or a week there,” Shields said. “That isn’t just doing the right thing, Matt. I’ve never once felt that it was anything you weren’t glad to make that sacrifice back here on the home front.”

In total, there were five current or former military that work in or with Ballard’s office in attendance at the award ceremony.

“It speaks volumes that they are here to see you receive this award, because we are all grateful for what you do and the example you set for other employers and other employees,” Shields said.