State Question 805 is under fire from two Oklahoma sheriffs.

"We've seen recent ads that we want to dispel. There's great concerns with the language and the misinformation," said Walton. "We want people to do their homework and do the research as they would on any voting decision they might enter into. But we look at state questions—780,781 etc—and I consistently see false information that comes out."

Walton continued, "in the SQ 805 ad there's a caption that says it's endorsed by police officers and prosecutors. I've yet to see a prosecutor that I know of that supports this. And when you look at the police officer that speaks in favor of it, he's in Lindsay, Okla., an ex-police chief of a town of 2,800 people….I don't know how many cases he's worked, that's for him to answer."

Walton said advertising focuses primarily on those who say they've been victimized by the criminal justice system.

"But in reality, if your job today was to get into the penitentiary, you'd have to work at it. If you don't rob a bank or kill somebody, your chances of going to the penitentiary on a first, second, or even third offense is almost non-existent," he said. "805 eliminates the enhancement of sentencing of habitual, repeat offenders."

"The weak link is when they send that person to Lexington, Okla., to the department of corrections. It's become the joke that they're there long enough to get a haircut, their picture taken, an Aids test, and they're back home. We see it time and time again….Our ability to put a habitual offender away is still a hard job, it takes good police work, aggressive prosecution, good judges, and it still takes all of us working together. To think that we're going to take the teeth out of law enforcement. This is putting handcuffs on the wrong people–we're taking them off of thugs and putting them on law enforcement."

Walton went on to answer the question—what are state questions doing to law enforcement?

"We've decriminalized most everything in 780. And 781 was supposed to create a slush fund for mental health…but we're still providing that out of county budget money. It's not being subsidized by any health fund created by 781," he said. "But 780, 781, 788 are a walk in the park compared to what 805 is going to do to Oklahoma."

He added that 805 is "absolutely neutering law enforcement."

"I absolutely worry that this will increase crime in our community," Walton said. "State Question 805 makes it a really, really good day to be a thug in Oklahoma."

Sheriff Turner added, "this is important for our communities, for our citizens, for our victims. October is domestic violence month and people need to realize if we vote yes on this, domestic violence is one of the non-violent crimes included in this—domestic violence by strangulation, child abuse, sexual solicitation of a minor, child trafficking are very serious crimes that are non-enhancable if this passes."

Turner said, "Our victims have the right to be protected…as a law enforcement official that's my job."

He said state "law enforcement is already being crippled daily by the laws of the land that we're choosing through state questions."

Turner added that state question "is taking tools that our prosecution has against crimes—to say a second offense DUI is a felony—away."

"This is about career criminals, that keep re-offending eight, nine, 10, 12 times. Right now the average is four felonies before someone makes it to prison," Turner said. "If we continue to pass legislation and we continue to do things that decriminalize Oklahoma laws then we're going to be a lawless country and a lawless state."

He added, "our citizens, and the citizens of this state, mean more than the thug running over them."

Turner said state questions like this one are demoralizing for law enforcement and for victims.

"It's our job to provide that. That's why we're here today is to say please don't take that opportunity away from us," Walton said. 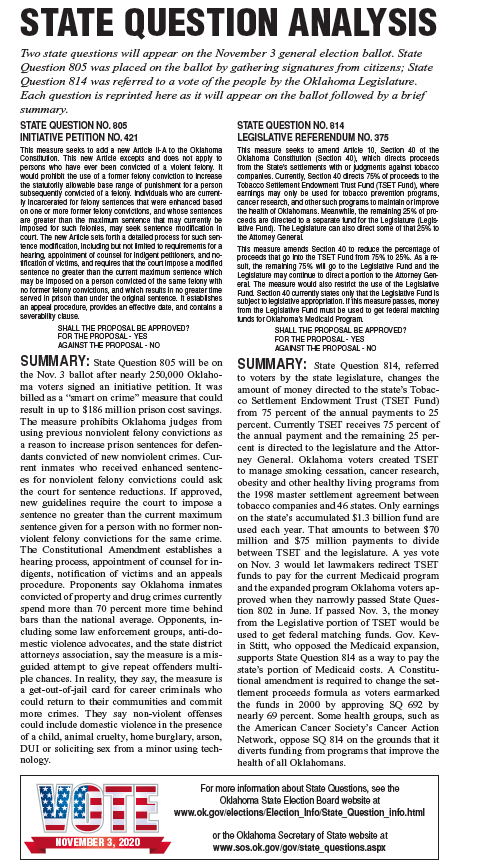 In anticipation of the presidential election in November, the Progress has done a series of stories covering voting, candidates and various is…