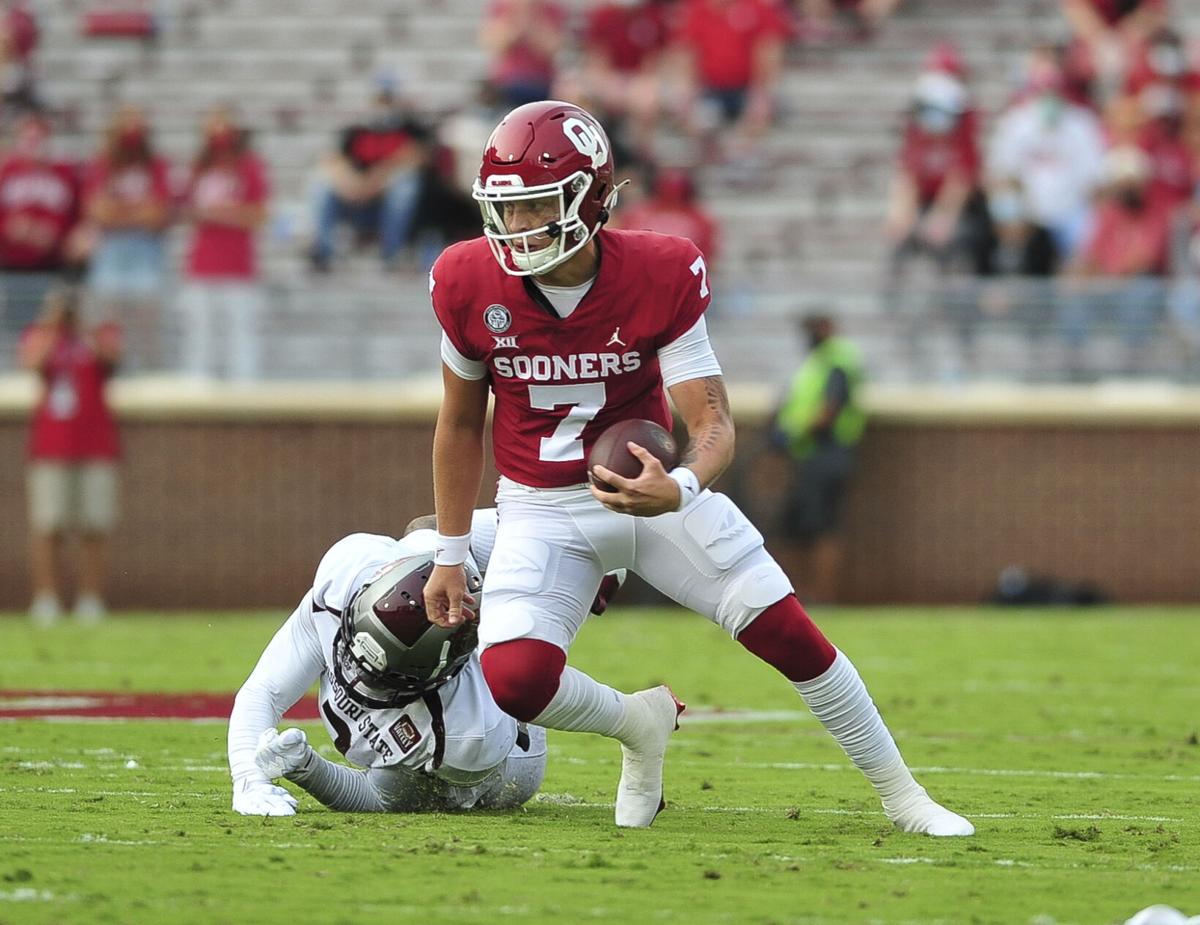 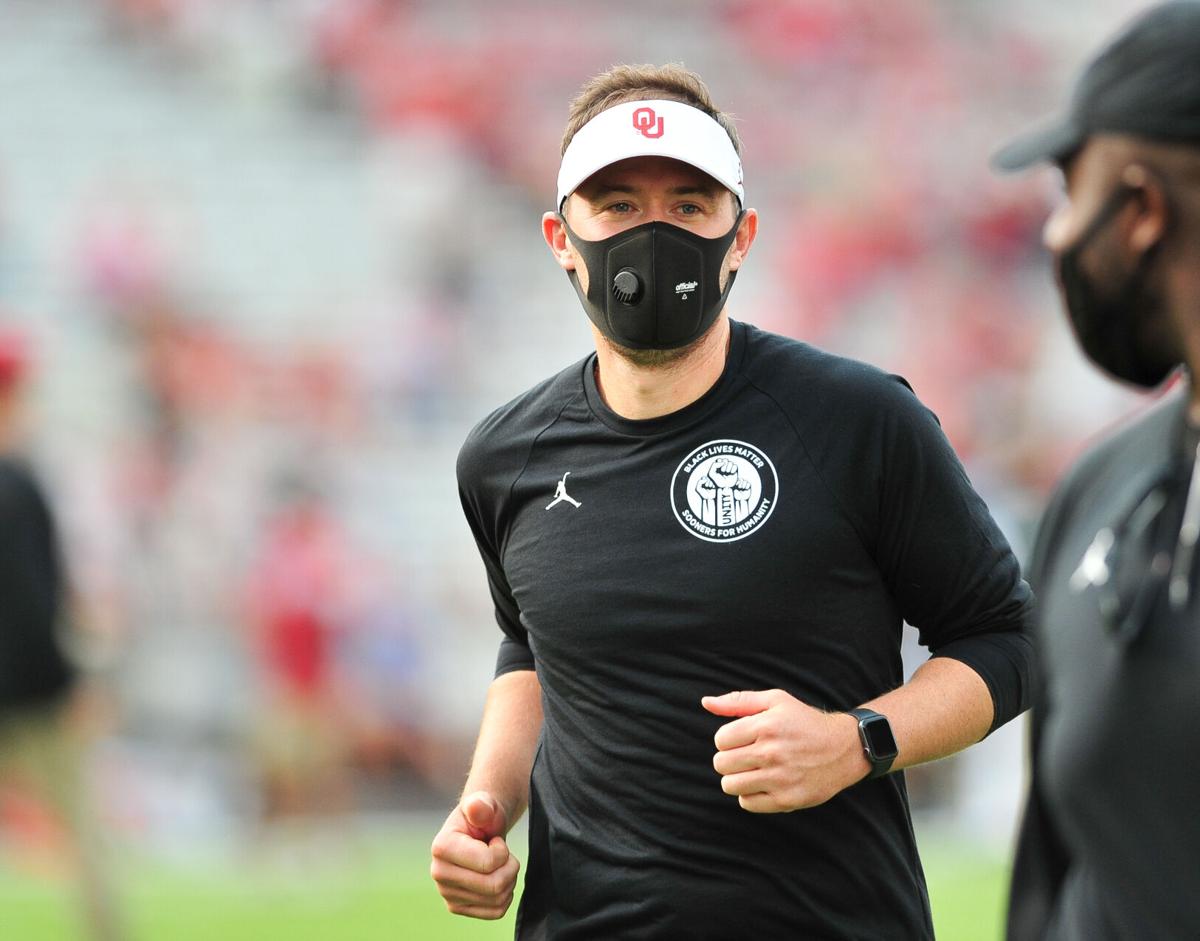 OU's Lincoln Riley runs off the field during the Sooners' game against Missouri State, Saturday, Sept. 12, 2020, at Oklahoma Memorial Stadium.

The home crowd roared, though Oklahoma’s season opener still hadn’t kicked off yet.

OU’s players paused for a moment of unity Saturday, while a video played on the Sooners’ massive video board in their home venue’s south end zone calling for racial equality.

The cheers then poured from a capacity-reduced Oklahoma Memorial Stadium as Sooner players stood on their sideline and linked arms with one another.

“For the crowd to accept what we were doing, it was a confidence booster,” OU defensive end Isaiah Thomas said, “like, OK, we're making a step in the right direction.”

The fans' show of approval wasn’t the case in Kansas City this past Thursday when a similar demonstration of unity was held during the NFL’s first game of the year. Players from both the Kansas City Chiefs and Houston Texans were booed as they stood in solidarity, which OU’s roster seemed well aware of entering Saturday’s game

“As you saw, a lot of other responses have been going on in the world, with the NFL and other people, but our crowd had a great response,” said Spencer Rattler, OU’s redshirt freshman quarterback. “We were all very happy with that and hopefully that'll continue.”

OU decided several weeks ago to use its first game as another chance to raise awareness towards equality.

The Sooners’ players and coaches’ first display of solidarity came two weeks ago on Aug. 28 when it forewent practice to march from the team’s locker room, dressed in all black, to the campus’ Unity Garden.

OU didn’t plan to stop with its efforts for social justice then, nor does it now.

The university is launching a program, called “Sooners for Humanity,” which will tackle social justice issues and raise awareness toward causes that promote equality.

"We want to be part of the solution," said OU athletics director Joe Castiglione in a statement. "Toward that end, we have worked collectively to develop a plan for ongoing awareness and education."

The program, which the school announced an hour before OU played Missouri State, will include educational and mandatory training programs, promote voting, especially with the United States Presidential election approaching, and professional networking.

OU will publicly promote the program, that strives “to provide a framework to address issues that negate and suppress the human experience,” through jersey patches, which players had the option of wearing during Saturday’s contest.

The patch design includes three raised fists with the word "UNITY" at the center. The words "Black Lives Matter" and "Sooners For Humanity" are also included in the design.

It’s another way the Sooners have used their platform this offseason to advocate for equality. And while it is a difficult time in the country, OU’s student-athletes are living in an unprecedented period where their collective voice is as strong as ever.

“It seems like these guys have a bigger voice on social media and being able to speak what’s on their mind,” said OU defensive line coach Calvin Thibodeaux, who played for the Sooners from 2002-06.

“We didn’t have that platform. ... It’s completely different now. But it’s a good thing. As long as their voicing it and it’s respectful and done in an intelligent way, coach [Lincoln Riley] encourages them to do so.”

Saturday, OU’s players found another avenue to capitalize on the support it has from its coaches.

For their fans to express their support as well, it was an uplifting experience.

“It felt good, especially just seeing across the world that no every situation like this has been smooth sailing. … I felt very relieved,” OU linebacker DaShaun White said.

“It was one of those things that, in our position, if we don’t talk about it, who will? I’m very proud of our team in being able to do something like that. I’m proud and happy with how things turned out.”

Keep up with the Sooners on social media by following OU Gameday by Norman Transcript on Facebook and @transcript on Twitter.