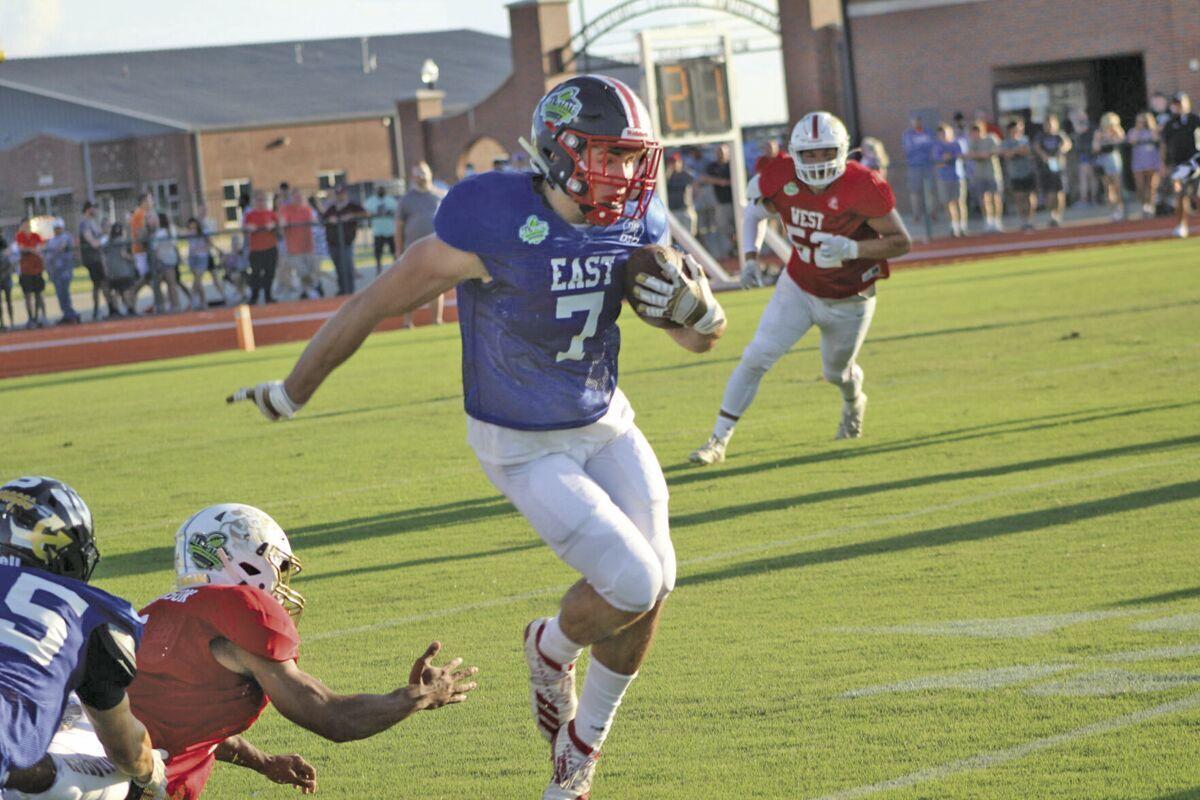 Former Claremore standout Dylan Kedzior (7) glides past a would-be tackler for a gain of 5 yards during the Oklahoma Football Coaches Association All-State game Saturday at Oklahoma Baptist University in Shawnee. 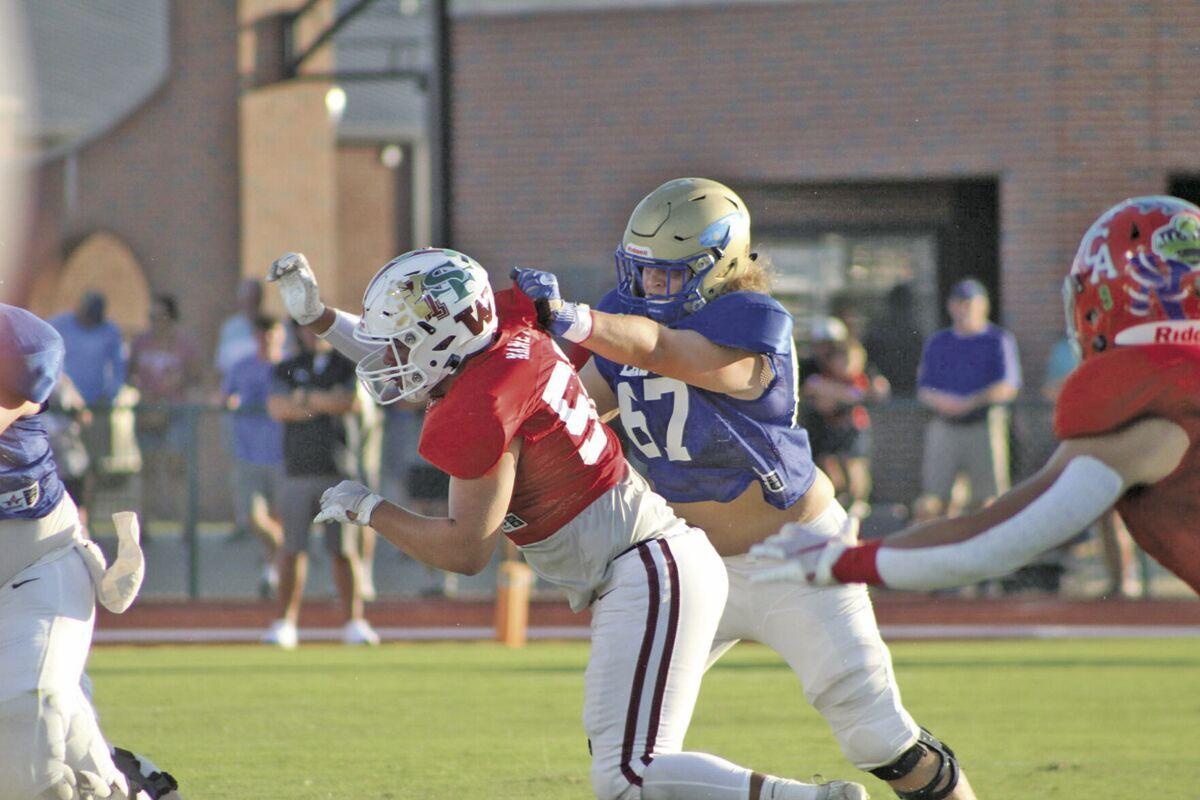 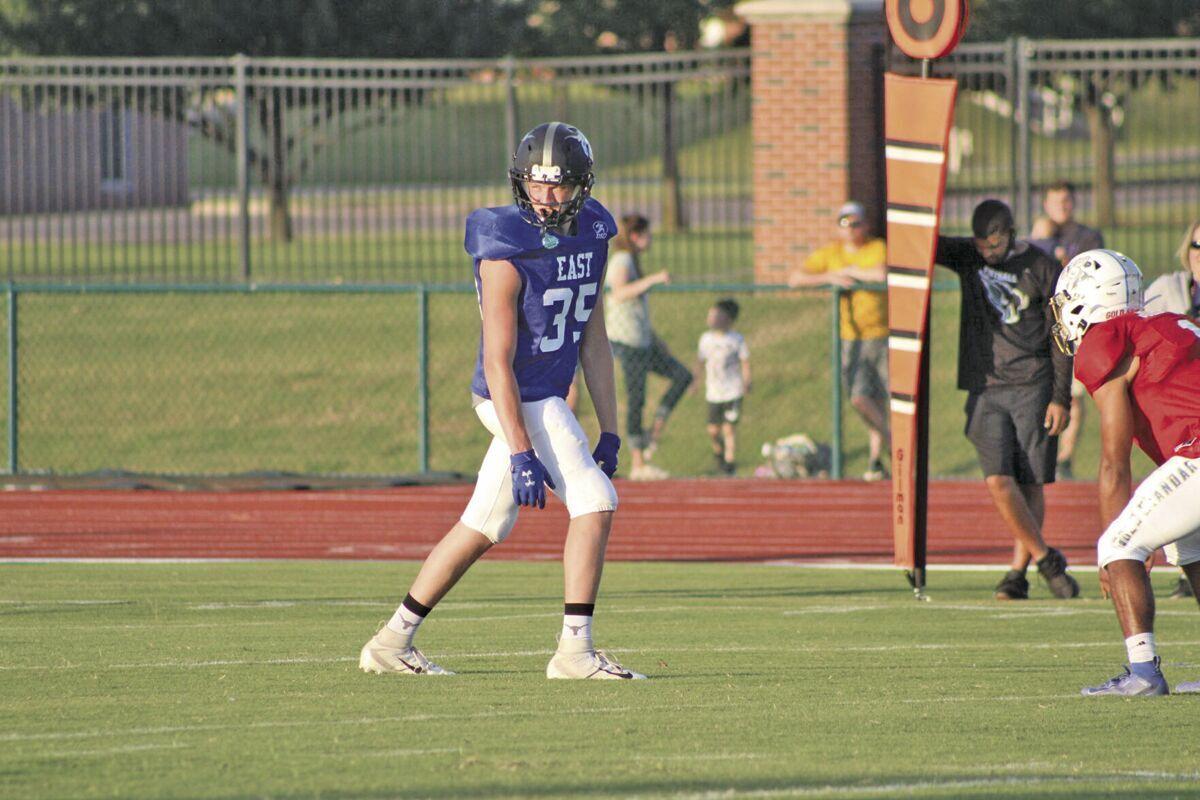 Ethan Trosky of Inola lines up for a play during the OFBCA All-State game Saturday at Oklahoma Baptist University in Shawnee. Trosky didn’t record any catches, but he saw plenty of playtime for the East.

Former Claremore standout Dylan Kedzior (7) glides past a would-be tackler for a gain of 5 yards during the Oklahoma Football Coaches Association All-State game Saturday at Oklahoma Baptist University in Shawnee.

Ethan Trosky of Inola lines up for a play during the OFBCA All-State game Saturday at Oklahoma Baptist University in Shawnee. Trosky didn’t record any catches, but he saw plenty of playtime for the East.

SHAWNEE — Although he was initially snubbed, Dylan Kedzior proved he belonged among the state’s elite.

The Claremore graduate put his abilities on full display Saturday night, catching five passes for 70 yards and two touchdowns for the East in a 21-13 loss to the West in the Oklahoma Football Coaches Association All-State game at Oklahoma Baptist University’s Crain Family Stadium in Shawnee.

That effort earned him East Offensive Player of the Game.

Kedzior wasn’t among the original 37 East players selected by the Oklahoma Coaches Association in January, but Stroud’s Chris Elerick, who coached the East team, selected him as an alternate 29 days before the exhibition after others opted to not compete.

That snub didn’t sit well with Kedzior, who finished with 957 yards receiving and 14 touchdowns on 55 catches for the Zebras in 2019. He totaled 148 receptions for 2,463 yards and 30 touchdowns in three varsity seasons with Claremore.

“That was my mindset coming in; I wanted to prove myself,” Kedzior said. “I was overlooked to begin with, so it was awesome to come in here and prove that I belong down here.”

Both of his touchdown grabs of 22 and 34 yards came from the 6-foot-1 Cowboys walk-on, who gave the future Northeastern Oklahoma A&M College product high praise the next day on Twitter.

“Dylan Kedzior is an absolute baller,” the tweet read.

Kedzior didn’t shy away from making his own compliments about Gundy, detailing how the pair connected for their first touchdown.

“It was awesome, man,” Kedzior said of playing with Gundy. “Gunnar plays a great ball and throws it perfectly. He has a cannon on him, too. And he has the wits. He checks me to a fade when there’s a linebacker over me, so he’s extremely smart. It was awesome playing with him.

“The original play, I was supposed to run a fade,” Kedzior added, “but we saw that the safety was like 10 or 15 yards off, so Gunnar checked me to a hitch. I run the hitch, and I see him but he doesn’t throw it, so I thought, ‘OK, I’m just going to roll with him.’ I just turned it up the sideline, and they bit on the hitch, so I just outran them to the end zone.”

That score brought the East to within one at 7-6 with 2:14 remaining in the first half.

Gundy found Kedzior for another touchdown on the final play of the third quarter, capping a 10-play, 91-yard drive that spanned nearly three minutes with a 34-yard toss to give the East a 13-7 advantage.

Gundy completed 13 of 22 passes for 180 yards and two touchdowns with an interception.

“I love playing with these guys,” Kedzior said. “I wish we had more time to play together, you know. It was just so cool getting up here and meeting everybody and meeting all the talent from the eastside of the state. It’s just amazing.”

Kickin’ Zebra: Kedzior didn’t excel in only the passing game.

He handled the kicking duties for the East as well, booting four punts for an average of 40.8 yards while averaging 52 yards on his three kickoffs. He also went 1-for-2 on extra points.

Kedzior sent the game-opening kickoff through the north end zone for a touchback. Prior to that, his only kicking experience in football came in the form of two onside kicks during his senior year.

Kedzior was assigned the positions because the coaching staff didn’t use a roster spot for a punter or kicker, and the new role allowed Kedzior to reminisce about the soccer season lost to the COVID-19 coronavirus pandemic.

Kedzior and the Zebras were 2-2 before the season was canceled.

“We were really disappointed whenever that got canceled because we thought Claremore actually had a state championship team,” Kedzior said. “But I just came out here and did what I could do.”

Spring football?: Although Kedzior is continuing his football career at NEO in Miami, Saturday’s game was unfortunately his last of 2020.

On July 13, the National Junior College Athletic Association (NJCAA) moved most fall sports — including football — to the spring semester amid concerns surrounding the pandemic. Because of that, football season will likely begin in January for Kedzior and the Norsemen.

He is taking the change in stride, though, and looks forward to taking advantage of the elongated preseason.

“We’re going to have so many practice days that we can use between August and November,” Kedzior said. “I’m just going to go out there and work my hardest and make myself a better player so when the spring comes, I’m ready to go.”

Optimism for fall: Kedzior won’t play football this fall, but his alma mater has a great chance of doing just that.

As of now, the Oklahoma Secondary School Activities Association plans to hold all fall sports as originally scheduled, which is exciting news for Claremore football coach Jarrett Hurt.

Hurt was among the 2,060 people in attendance at Crain Family Stadium, which makes him even more optimistic about the opportunity for a 2020 season.

“If we can do this, we can have football in the fall,” Hurt said. “I think when you see a packed stadium and standing room only around the fence, it gives you great optimism that we can have high school football this season.”

Learning on the fly: As is the case with every All-State competition, practice time is in short supply.

Players had only two days — Thursday and Friday — to learn a new set of plays and formations before Saturday’s game. The East team practiced at Stroud High School, which is more than an hour drive from most towns in Rogers County.

Most offensive line assignments are quite detailed, so Bonner Pennington of Oologah had to do some quick learning.

Pennington, who is set to play for Southern Arkansas University this fall, started in the trenches for the East.

“We ran the same stuff like inside zone and counter and that kind of stuff, but we had to learn a whole lot of new names, and that’s pretty much what was hard to learn,” Pennington said. “I was still studying on my way here. It was tough because at Oologah, we go with numbers for the linemen part of the play. Here, it was names of towns and NBA teams and NFL teams. It was a lot. I had to put what number it was back at home with each play.

“I don’t think I messed up, but I definitely missed a couple of assignments.”

Sticker swap: Although players donned their respective school’s headgear, identifying them by helmet decals might’ve been difficult for fans.

That is because sticker swapping — similar to jersey swaps in professional sports — is a longstanding All-State football tradition. By kickoff, some players had at least five decals from other athletes’ schools.

Inola’s Ethan Trosky, who joined Kedzior as a receiver for the East, couldn’t even remember every sticker he received from his new teammates. The most prominent one came from Collinsville, which he displayed on the right side of his helmet.

“Right before the game, we all just wanted to decorate them with all the guys we played with so we could remember it,” Trosky said. “It was a friendly little thing. I had the All-State sticker first — we had to have that — and I got a guy from Collinsville. I can’t remember the other guy, but his was on the back.

“It is an All-State tradition to bring a ton of decals to share with the team so we can all get a ton of them on our helmets.”