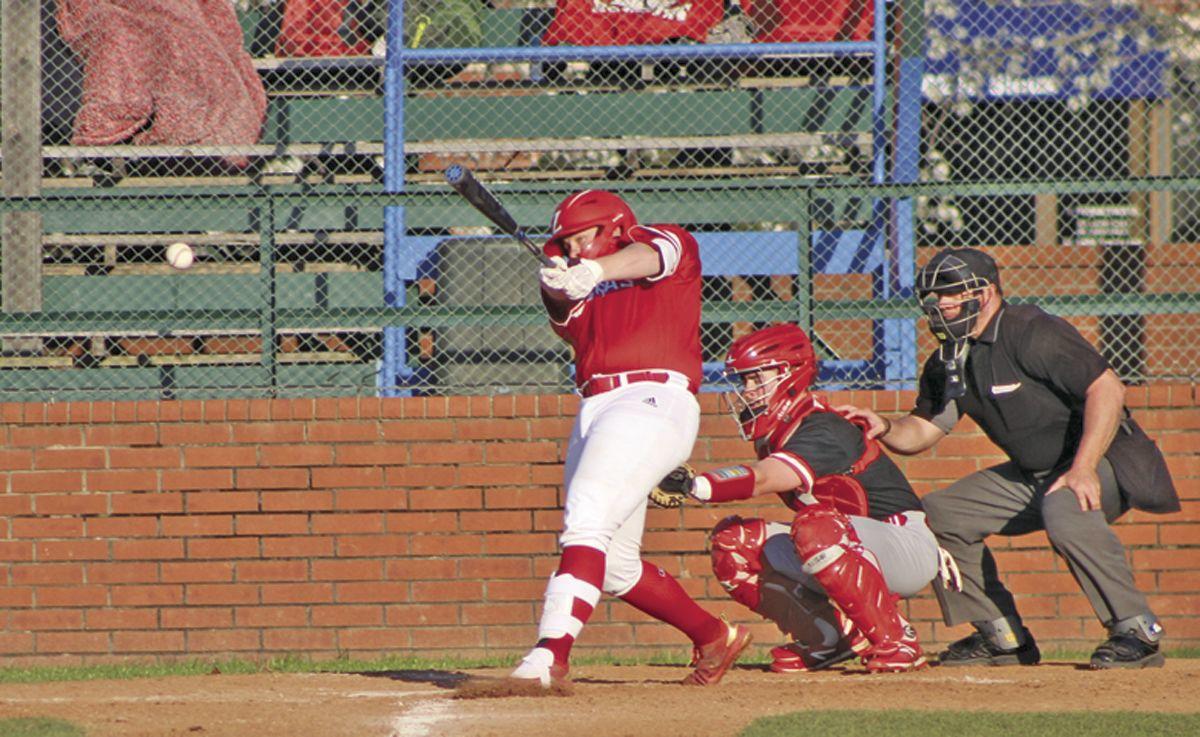 Claremore senior Trevor Janzen records a hit during the Zebras’ District 5A-4 opener against Skiatook at American Legion Park on Monday. He led the team with three hits. 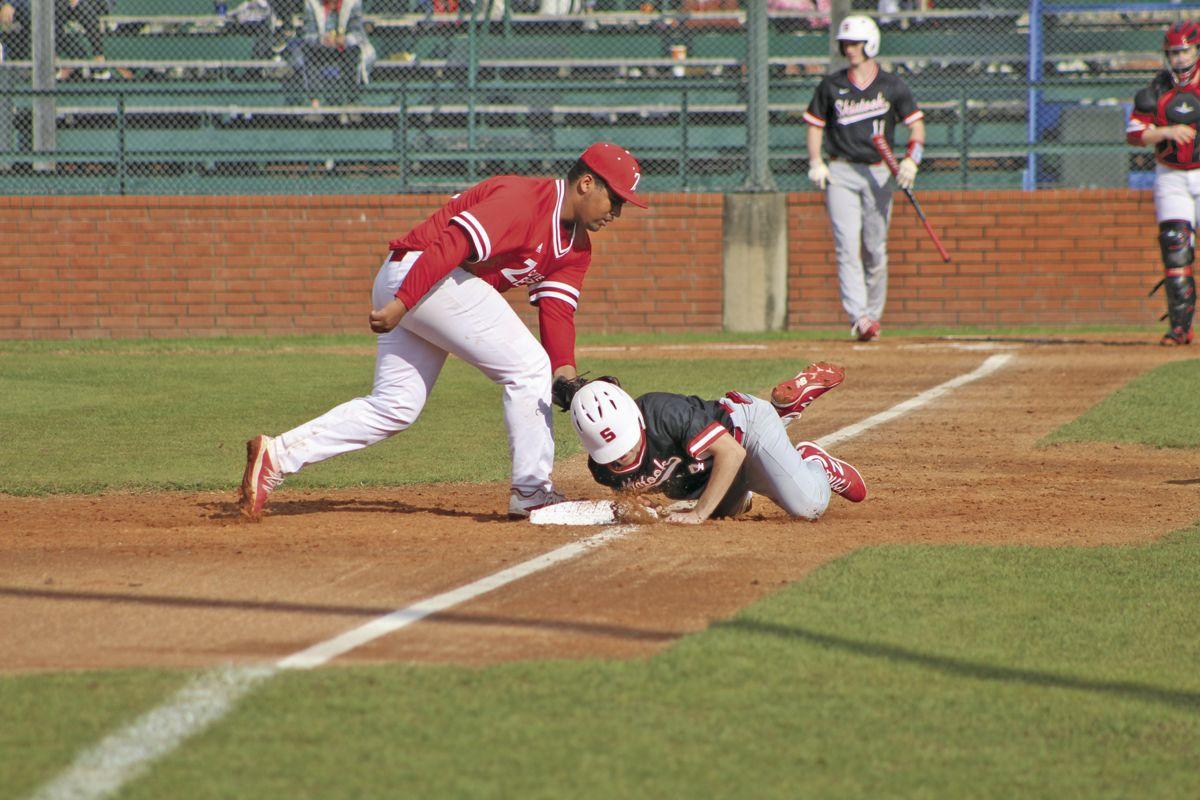 Claremore third baseman Ethan Grimett, left, tries to tag out a Skiatook base stealer during Monday’s game. The runner was ruled safe, but the Zebras rolled to a victory anyway.

Claremore senior Trevor Janzen records a hit during the Zebras’ District 5A-4 opener against Skiatook at American Legion Park on Monday. He led the team with three hits.

Claremore third baseman Ethan Grimett, left, tries to tag out a Skiatook base stealer during Monday’s game. The runner was ruled safe, but the Zebras rolled to a victory anyway.

As Gannon Sherl approached the plate for his second at-bat, his father — Claremore coach Jim Sherl — gave him simple, yet specific instructions.

“Do your job and get things done,” the elder Sherl commanded.

The freshman smacked a well-placed triple along the right-field line, scoring sophomore Ethan Grimett, who preceded the hit with an RBI double that gave the Zebras their first lead of the game.

Claremore never trailed again, using those hits to spark an eight-run third inning on the way to a 12-2 run-rule win over Skiatook in the District 5A-4 opener at American Legion Park on Monday afternoon.

“My dad told me to wait for the right pitch, and that’s what I did,” said Gannon Sherl, who finished 2-for-4 at the plate with 2 RBIs. “I listened to him. We had a lot more energy after that.”

Through four games, Gannon Sherl is 4-of-11 with 4 RBIs, two walks and only two strikeouts.

That is quite a stat line considering he is only five months removed from a life-threatening concussion that kept him hospitalized for days and gave him short-term memory issues that took months of therapy to correct.

Aside from a silly mistake here and there, his father said the turnaround has been remarkable.

“He’s doing really well in school, and his short-term memory seems to be a lot better,” Jim Sherl said. “Although he did put the peanut butter jar in the refrigerator last night, he’s had a good recovery.”

So when speaking of his son’s performance after the game, Jim Sherl understandably did so while grinning cheerfully.

Gannon Sherl drove in Kaden Renfroe in the fifth for another RBI with a groundball single to left field before Cameron Palmer finished the Bulldogs off with a single to center field, scoring Carson Young.

If not for the 10-run mercy rule, Gannon Sherl, who advanced to third on Palmer’s hit, would’ve likely scored for a second time shortly thereafter.

“He’s very athletic and has a lot of speed, so he can lay down a bunt, but he’s shown he can get up and hit a triple if he wants to,” Jim Sherl said when recounting his son’s game-changing triple. “He had watched some pitches in his earlier at-bat, and I don’t know how well he was timed up, but he got a pitch away and went with it. It stayed fair, and their kid made a heck of a play on it — I thought he was going to catch it — but it got down, and he was able to get to third.

“That really got us going, and you could really feel the momentum change at that point.”

Before then, though, the game appeared to be going a full seven innings.

Although the teams were tied at 2 after two innings, the Zebras were forced to play from behind in both frames.

However, that all changed after Jim Sherl called a team meeting to loosen his club up. All doubts soon dissipated, thus beginning Claremore’s 10-0 run to the finish.

In addition to the runs scored, the Zebras managed nine of their 12 hits in the final two innings.

“I think we were a little bit nervous and a little bit scared with it being the first district game,” Jim Sherl said. “The score doesn’t reflect it, but (Skiatook is) a good team. We were playing uptight, and that’s not the makeup of this team. This team is fun, loosey-goosey and likes to have fun. There in that third inning, they just started having fun and the dugout came alive, and that brought the bats around.

“Then we got aggressive, which is our style, and they couldn’t handle it.”

Gannon Sherl scored on a right-field single from Palmer, who then reached home after Noah Smallwood grounded into a fielder’s choice.

Kio Penn was the beneficiary of an error by Skiatook catcher Braedon Foster, tacking on another run before a Janzen 2-RBI single to center field added two more, scoring Smallwood and Scout Cutsinger.

Janzen led the Zebras with a 3-for-4 outing at the plate while notching 2 RBIs. Grimett, Sherl and Palmer recorded two hits apiece, combining for 6 RBIs.

The Bulldogs finally retired the side three at-bats later, but not before Renfroe capped the eight-run spurt with a score off a passed ball.

Claremore went scoreless in the fourth but reached the run-rule threshold in the fifth on a pair of RBI singles from Gannon Sherl and Palmer.

Dasen Tilley pitched a full game, striking out four while allowing two hits and a walk. He held Skiatook hitless in the final three innings.

“He is one of the very few guys who has returning innings from last year,” Jim Sherl said of Tilley. “He’s got a little bit of velocity, and his ball moves a lot. Whenever he’s able to locate pitches, he’s pretty tough. Tonight, he was a little all over the place and threw a lot of pitches the first two innings, but I thought he settled down.”