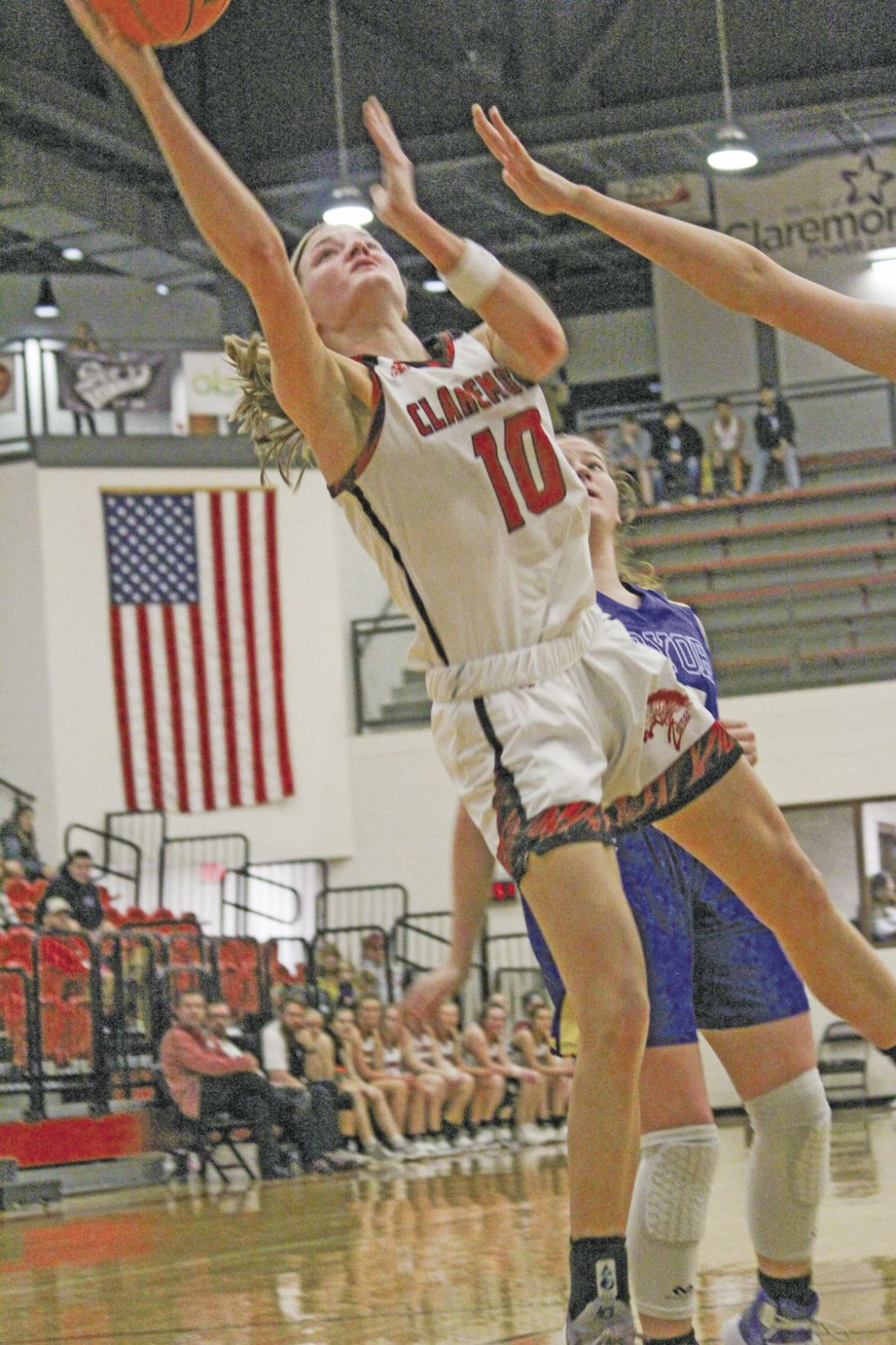 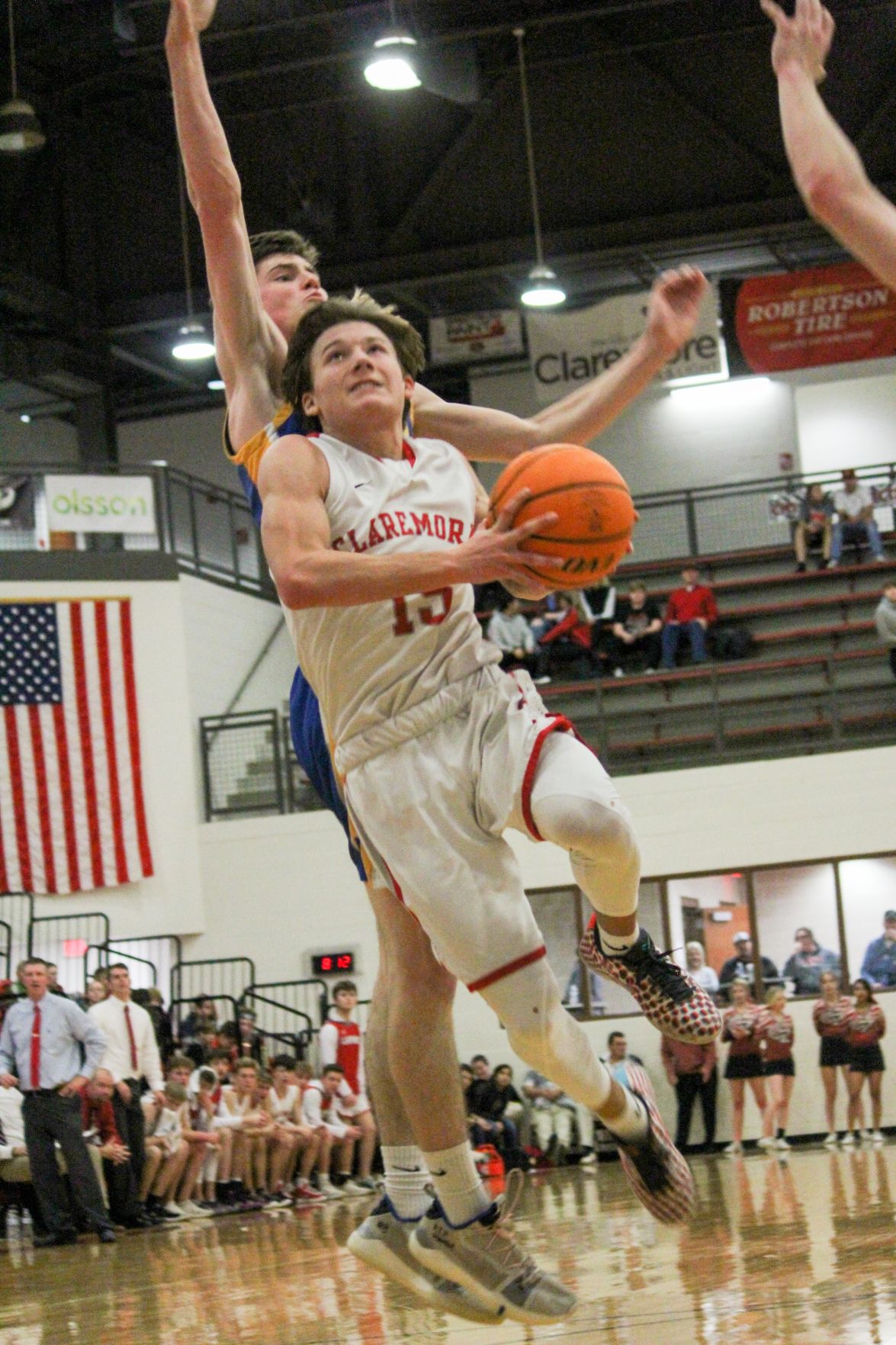 SKIATOOK — Hailey Grant did just about everything except hit a halfcourt shot, and she came within tenths of a second from doing that as well.

Although her third-quarter buzzer beater from that range left her hand just a tad late, the clock was the only thing that came close to stopping the Claremore senior on Tuesday night.

“Honestly, I didn’t even think it would go in,” Grant said. “I just kind of threw it up there, and when it went in, I was like, ‘Holy cow, I’ve never done anything like that before.’”

Grant, a 6-foot-1 phenom, continued her recent reign of dominance with a double-double of 27 points and 21 rebounds in a 44-39 win over Skiatook at the Brooks Walton Activity Center.

She scored the Lady Zebras’ first 15 points and reached double-double status at the 1:15 mark of the second quarter with an offensive rebound and putback. At halftime, she already had 17 points and 10 rebounds.

No Claremore player except Grant scored until sophomore guard Alayliun Knight dropped a 3-pointer with 1:40 remaining in the first half. Knight finished with 6 points and 4 rebounds.

“I like that my teammates and coaches trust me and lean on me a little bit,” said Grant, who was coming off a 36-point performance against Glenpool on Friday. “I’ve accepted that role, and I try to do my best to not let them down.”

Claremore held a 12-point lead early in the fourth quarter, but the Lady Bulldogs (5-13) forced eight turnovers and embarked on a 9-1 run to come within four on three occasions.

However, the Lady Zebras, who lost the turnover battle 19-9, hit 6 of 8 free throws to hold off the rally. Grace Bump, a sophomore, went 4-of-4 from the line during that stretch to finish with 8 points and 2 rebounds.

Taylor High led Skiatook with 15 points and 10 rebounds, scoring seven of her points in the final frame. Rylee Massey added 12 points and 3 rebounds.

“When Hailey is shooting the ball the way she is, you can weather the storm a little bit,” Claremore coach Mike Hughes said. “I think she probably shot 70 percent; she didn’t miss many.”

BOYS | SKIATOOK 52, CLAREMORE 48: It has just been one of those years for Claremore boys basketball.

Since defeating Coweta 65-64 on Jan. 14, the Zebras (4-12) have lost seven-straight games, four of which were decided by 4 points or less. Skiatook became the latest team to join that list, securing the four-point win with a run late in the fourth quarter.

“Breaks and calls just aren’t quite going our way,” Zebras coach Tommy Nolan said. “We fight through a lot of adversity, but they come to practice and go to work every day and continue to get better. When you have a lot of inexperience and a lot of youth, sometimes it takes multiple trials and tribulations.”

Claremore led 41-36 with less than a second remaining in the third period, but an untimely foul with 0.9 seconds remaining allowed Alex Hollomon to trim the deficit to three.

Those free throws began a 16-7 run that led the Bulldogs to victory. They forced five turnovers during the rally and 15 overall while committing only seven total themselves.

“We felt a pretty big momentum shift after that,” Nolan said. “The kid was just playing hard, and it’s just one of those things that happens. The momentum shifted down for us, but they hit some difficult shots in the fourth period and adjusted well.”

Caison Hartloff, a junior, hit a 3-pointer early in the fourth to give the Zebras a 44-42 advantage, but they were outscored 10-4 from there on.

Noah Smallwood, a sophomore, led the Zebras with 13 points and 7 rebounds. Hartloff was close behind with 10 points and 7 boards.

Elsewhere for the Bulldogs, Dallin Anderson recorded 9 points and 8 rebounds.

The Bulldogs (8-11) managed this scoring success despite shooting a measly 7-of-23 from the free-throw line. In comparison, Claremore hit 14 of 17.

“It’s frustrating, but it’s also frustrating they went to the line 23 times,” Nolan said. “They got us on our heels and spaced us out a little bit and did a good job of attacking the rim. We have to do a better job of keeping them from getting to the foul line.”

Claremore travels to Collinsville on Friday for a doubleheader beginning with the girls game at 6 p.m.