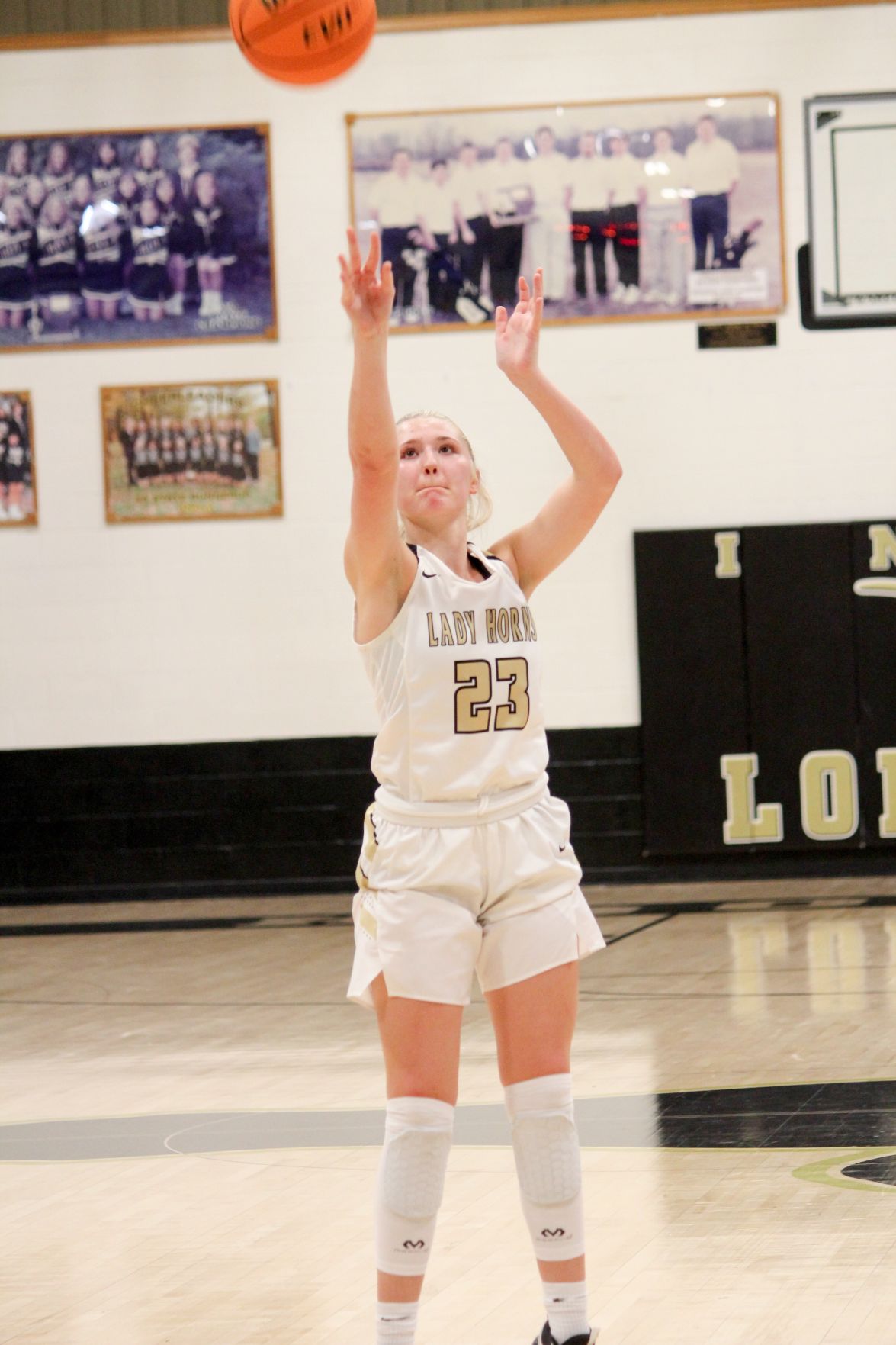 Inola senior Marley Jo Eaves shoots a free throw during a game against Fort Gibson in the Jerry Oquin Tournament on Tuesday. 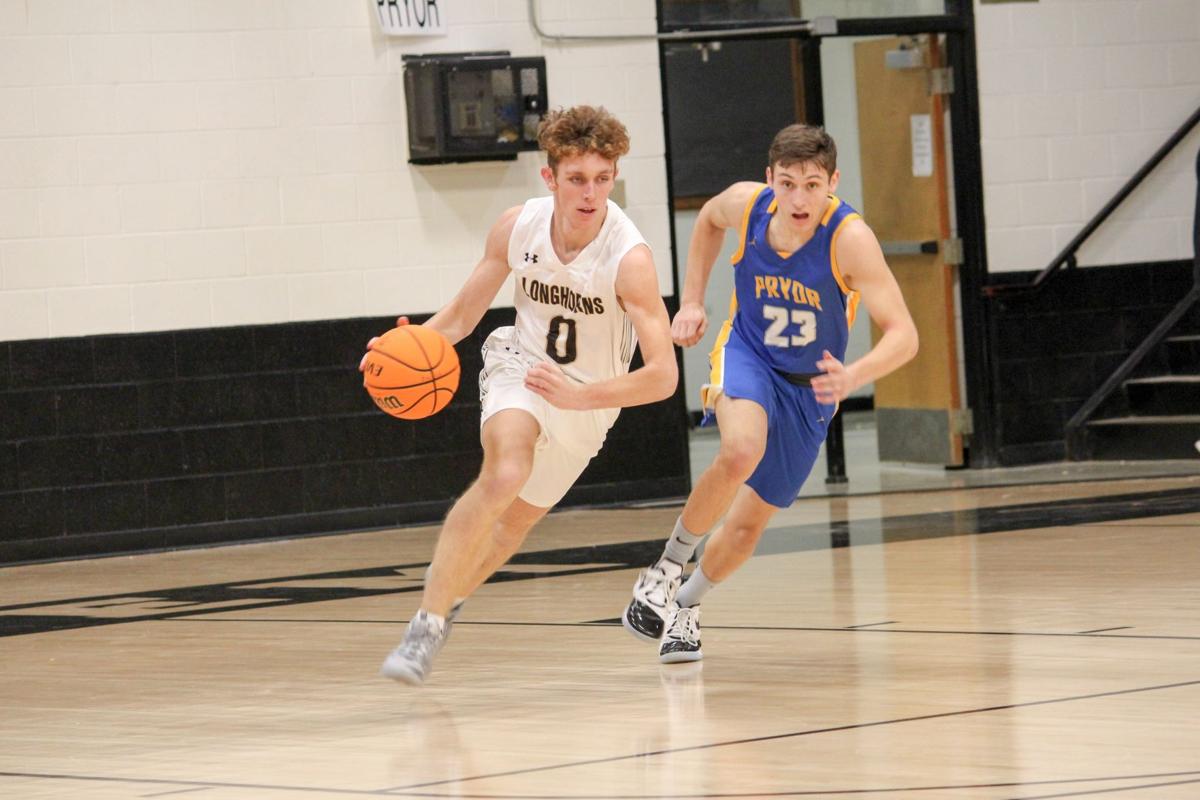 Inola junior Dalton Norman (0) races up the court while being guarded by Pryor junior Nik Jordan (23) on Tuesday.

Inola senior Marley Jo Eaves shoots a free throw during a game against Fort Gibson in the Jerry Oquin Tournament on Tuesday.

Inola junior Dalton Norman (0) races up the court while being guarded by Pryor junior Nik Jordan (23) on Tuesday.

INOLA — Step up to the line, take three dribbles, spin the ball and shoot.

That is Marley Jo Eaves’ free-throw shooting routine, and it proved to be the difference maker on Friday night.

Eaves went 9-of-9 at the line, finishing with 15 points and 10 rebounds while leading the Lady Horns to a 45-37 win over Siloam Springs in the Jerry Oquin Tournament consolation semifinals at the Inola Indoor Sports Arena.

The senior’s final eight points came via free throws, four of which helped stave off a late rally in the fourth quarter that saw the Lady Panthers come within four at 40-36.

“I was thinking, ‘Do your routine; you do this at practice every day. Just chill out and put the ball in the hoop,’” Eaves said.

The rest of the team seemed to feed off her mentality, for Inola netted 13 of 15 free-throw attempts.

“The way we practice them paid off in the game,” Bryant said. “That was big late because we were struggling offensively. Getting to the line and getting those points was pretty valuable.”

Inola fell behind 6-0 early after a pair of 3-pointers from Mia Hevener, but it closed the quarter with a 19-5 run thanks to the efforts of Madison Courtney and Emma Bell.

The duo combined for 14 of Inola’s 19 first-quarter points, including three 3-balls from Courtney. Kelsie Roberts chipped in a 3 as well.

Courtney managed only two free throws the rest of the game to finish with 11 points, but her contribution was enough to give the Lady Horns the lead for good.

“We tried to get her rolling,” Bryant said of Courtney. “She was a big shooter for us last year, and we’ve been waiting for her to break out this year. Tonight, she broke out and shot well for us, which is big.

“In the first half, we were hitting shots, and that was probably as good as we’ve played offensively.”

Jael Harried led Siloam Springs with 14 points and seven rebounds, and Hevener was held scoreless in the second half after hitting four 3-pointers for 12 points in the first half.

“Once we realized (Hevener) was a shooter, we got out on her and paid more attention to her,” Bryant said. “She got our attention, and we closed out better on her.”

Despite trailing by two after one frame, Inola looked to be in for a barnburner with Coweta.

Then the second quarter happened.

The Tigers took full advantage of nine Longhorn second-quarter turnovers (and another nine in the second half) to secure a 69-50 win in the consolation semifinals on Friday night.

In all, Coweta forced 21 turnovers while surrendering only 10.

Inola (0-4) went on to lose to Victory Christian, 57-40, in the seventh-place game on Saturday morning.

Seth Anderson was responsible for seven of those deep balls, finishing with 23 points to lead all scorers.

Inola had its fair share of success from long range as well, hitting eight 3-balls.

Tuff Jones and Hank Parsons, who both tallied 11 points, each managed three, while Walt Spurlock (9 points) came away with two.

Elsewhere, Dalton Norman (8 points) and Garrett Cummins (7 points) led the team in rebounds with six apiece. Tucker Ford was close behind with five boards of his own.

Both Inola teams return to action Tuesday at Chouteau-Mazie with tip times set for 6 and 7:30 p.m.