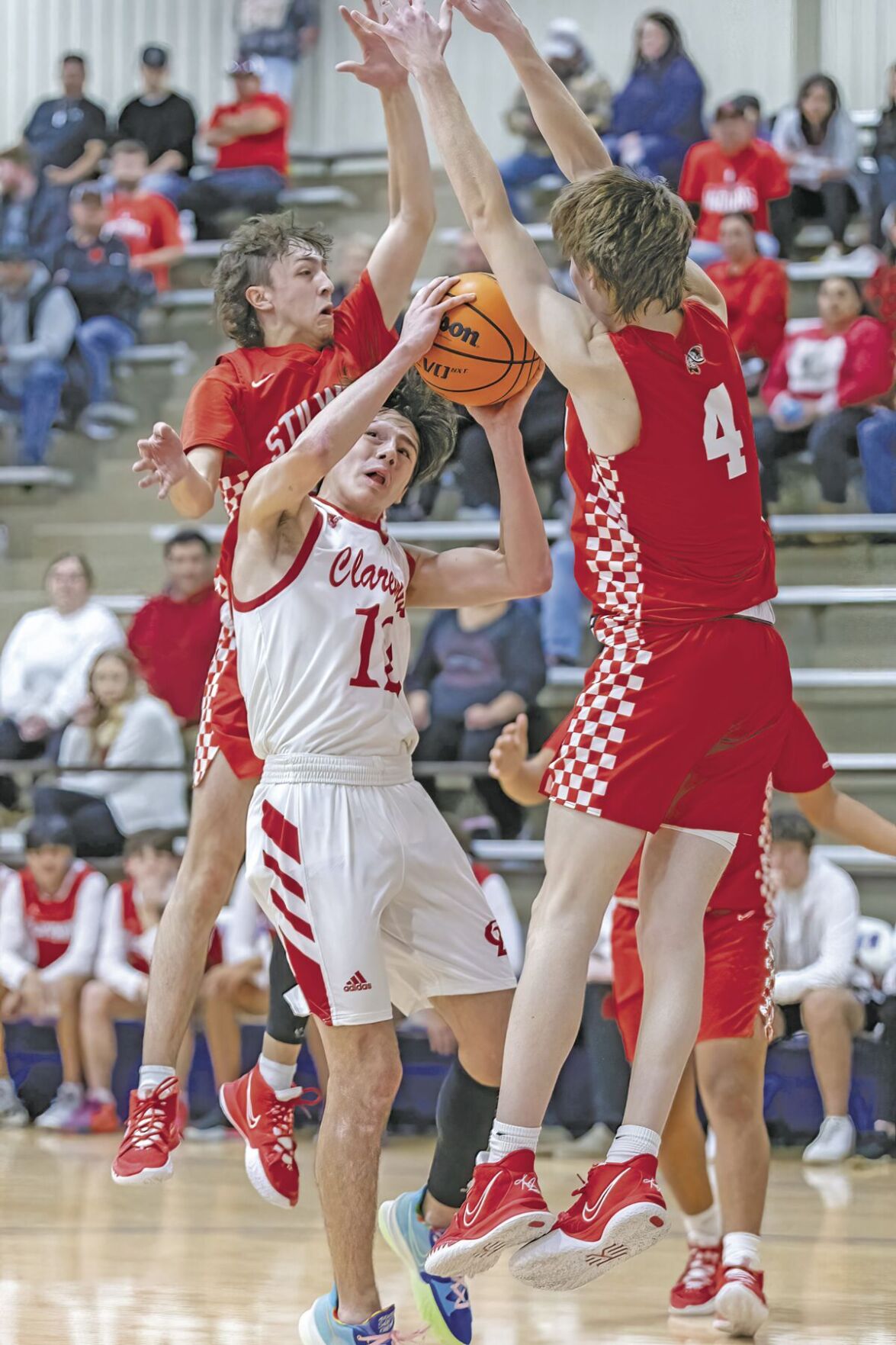 Claremore senior Michael McHugh struggles to get a shot off against the Stilwell defense during the Vinita Big Dawg Shoot-Out championship Saturday night. The Zebras lost 62-52. 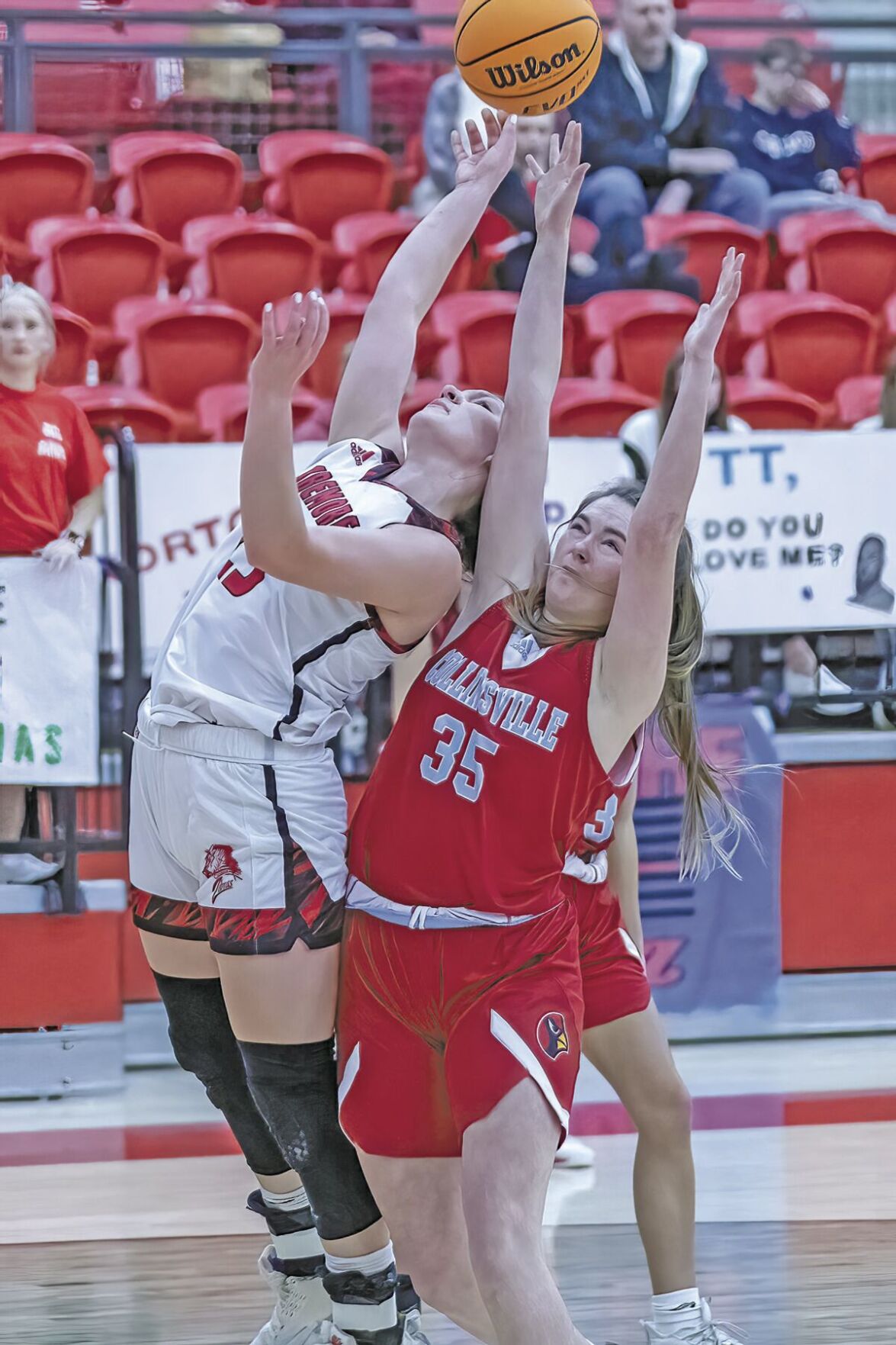 Claremore senior Michael McHugh struggles to get a shot off against the Stilwell defense during the Vinita Big Dawg Shoot-Out championship Saturday night. The Zebras lost 62-52.

The Zebras gave it their best shot, but in the end, Collinsville was just too much to overcome.

Using a massive 29-2 run that spanned most of the third quarter and the opening moments of the fourth, the 11th-ranked Cardinals cruised past Claremore 70-34 on Tuesday night.

The run came in response to an early rally from the Zebras in the third period, during which Tanner Steidley hit two 3-pointers to trim a 10-point halftime deficit to four at 25-21.

Claremore’s offense went cold after that, allowing Collinsville to build a lead that reached 38 points by the final minute of the fourth. By the time Michael McHugh scored the Zebras’ next points after the Steidley 3s, the Cardinals had already embarked on a 20-0 run.

Cooper McDowell scored in double figures as well for Collinsville with 11 points, but most of his damage was limited to the first half. The second half belonged to Himebaugh and Scyrkels.

“(Himebaugh) came in from football, and he really brought a different tenacity to their team,” Claremore coach Tommy Nolan said. “It was pretty challenging for us with their size and their strength and their ability to shoot and spread us out a little bit. It was one of those games. Coming out of halftime we feel like we made some adjustments early, but they just kept attacking us and got us on our heels, and we never really did find a flow. There was no chemistry, no flow to our group, which is usually what we hang our hat on.

“We just didn’t really play as a unit tonight.”

Steidley wound up leading the Zebras in scoring and on the boards, tallying eight points and four rebounds. Cade Chancellor, who finished with five points, also had four rebounds.

Brad Meacham helped the Cardinals win the battle of the boards 34-27, snagging a game-high six rebounds to go along with his five points. Despite that, Claremore held the edge on the offensive glass at 12-6.

The Zebras forced 15 turnovers, but its 16 giveaways negated any advantage that might’ve come from them.

Claremore (3-3) has now lost two straight, but Nolan remains confident his team can bounce back. It will have to do so quickly, for a road contest at No. 6 Coweta awaits Friday night.

“They know we’re just going to come to work,” Nolan said. “It’s like we talked about after the game. We’re not going to dwell on it. Obviously we’re frustrated and upset with the result and the way we played; we know we can play better.”

Hope Bump scored nine of the 11 Claremore points in the third period, but it seemed the defense suffered in the process as Collinsville used a 20-point quarter to open up a 43-28 lead entering the fourth.

That proved to be the difference, for the other three quarters saw only a three-point differential (29-26, Collinsville).

The Lady Zebras (1-5) won the fourth 9-6, but it wasn’t enough to close the gap created through the previous eight minutes.

Bump finished with a game-high 19 points while her older sister Grace added nine points — all of which came from beyond the arc.