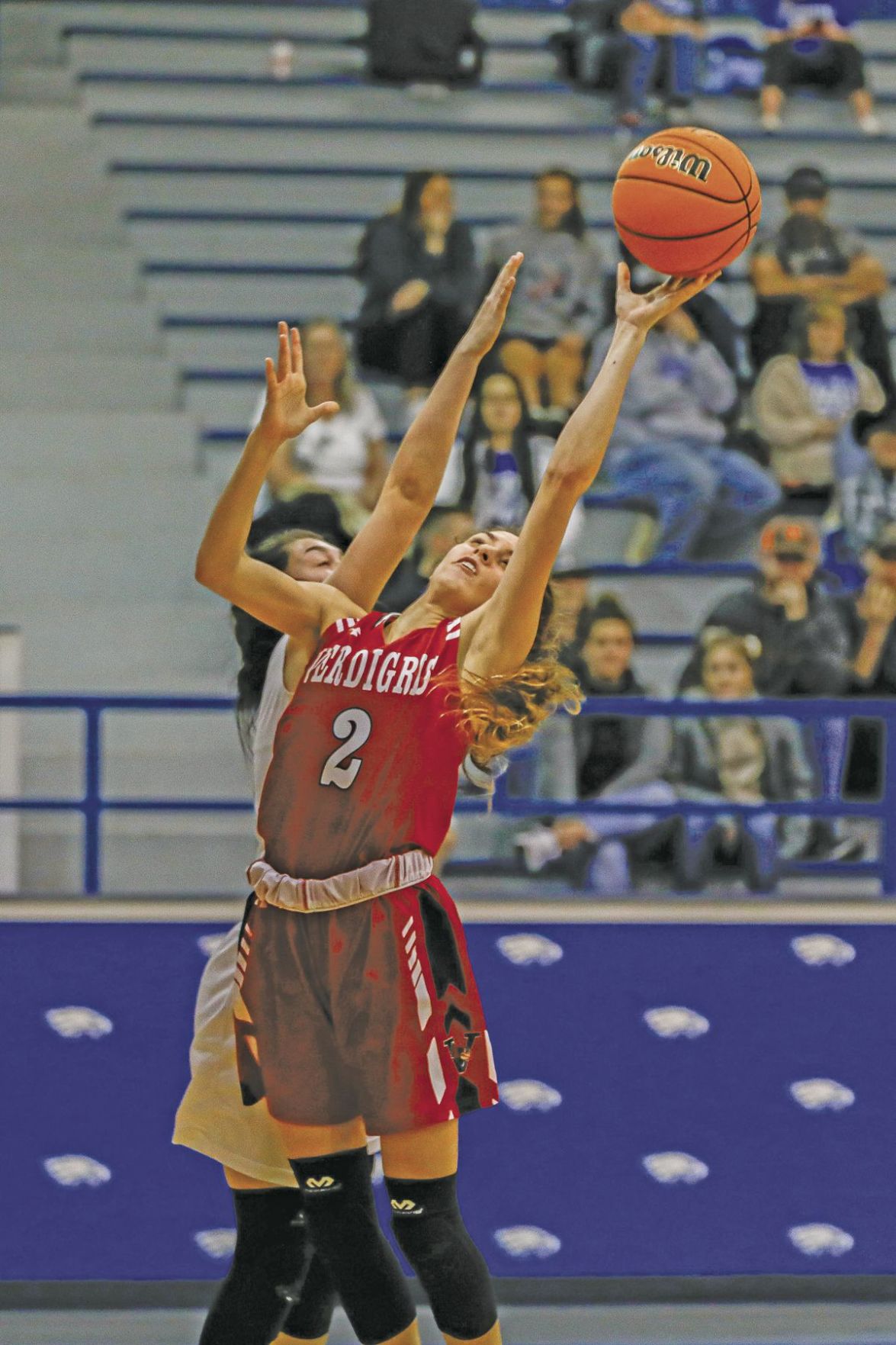 Verdigris junior Jordan Chancellor (2) avoids a Sequoyah defender while releasing a shot near the basket during a game on Saturday, Jan. 18. 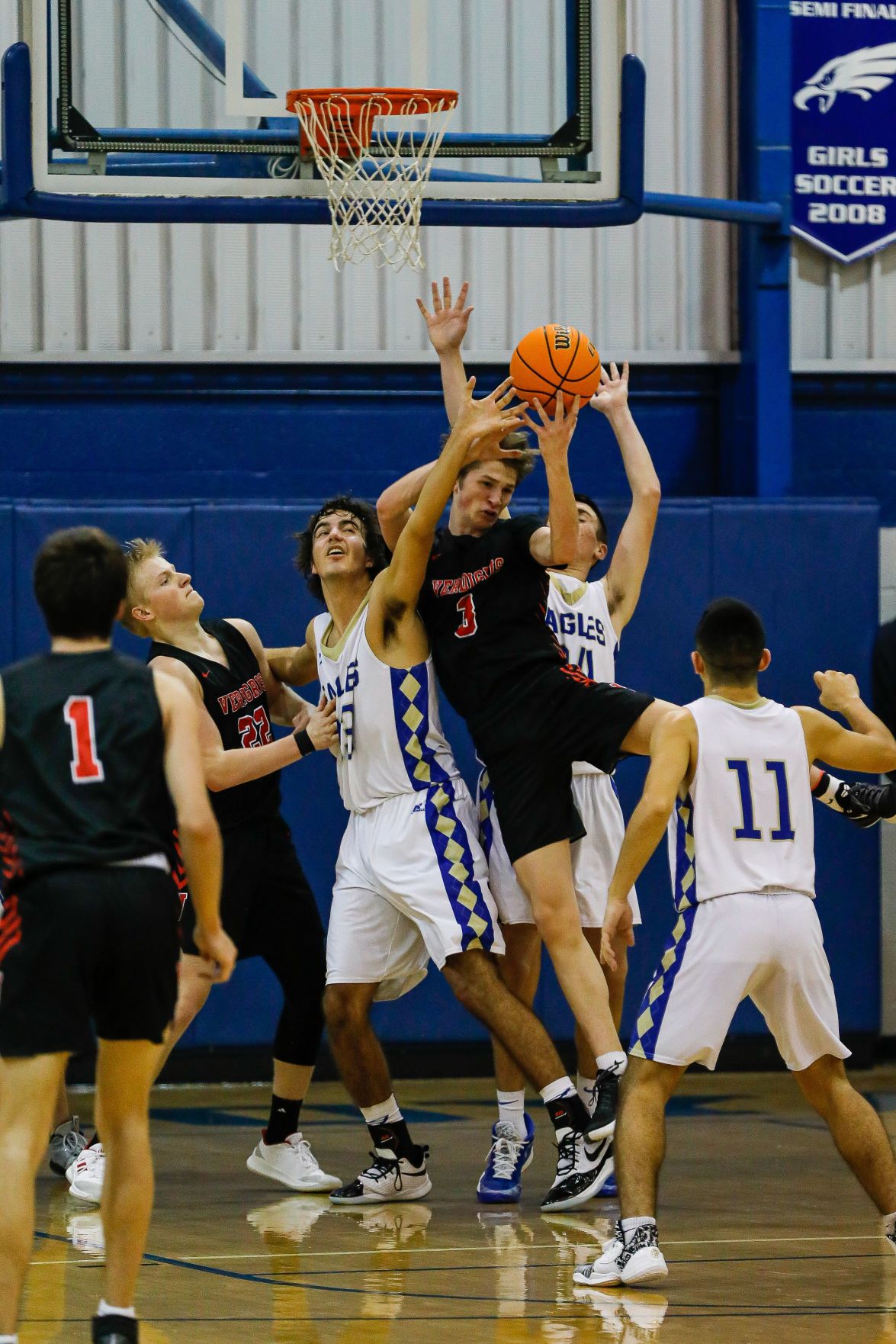 Verdigris senior Tyler Haddock (3) struggles to haul in a rebound against Sequoyah on Saturday, Jan. 18.

Verdigris junior Jordan Chancellor (2) avoids a Sequoyah defender while releasing a shot near the basket during a game on Saturday, Jan. 18.

Verdigris senior Tyler Haddock (3) struggles to haul in a rebound against Sequoyah on Saturday, Jan. 18.

VERDIGRIS — Once the rust wore off, the Verdigris girls basketball team was off and running.

Seeing their first action in 10 days, the Class 4A No. 7 Cardinals shook off a slow start with their relentless defense providing the jumpstart to an eventual 56-30 victory against Hilldale on Tuesday night at Jack Collins Field House.

Jordan Chancellor’s 15 points paced a trio of double-digit scorers as Verdigris (15-3) won its eighth-straight game to remain unbeaten in the new year.

Meanwhile, the Verdigris boys, ranked 18th, committed 16 first-half turnovers to fall behind by a dozen points at halftime and could not recover in falling 67-51 to the No. 14 Hornets.

Trent Haddock led the way with 11 points for the Cardinals (12-6), who dropped their second-straight after having compiled a season-high five-game winning streak.

Both Verdigris teams return to the hardwoods Friday for the school’s annual Homecoming contest. The Cardinals will entertain Miami with special start times. The boys’ contest will be played at 6:30 p.m. with the girls’ affair to follow at 8 p.m.

GIRLS | Verdigris 56, Hilldale 30: Verdigris had not played since a road win on Jan. 18 against Sequoyah.

As one might anticipate, it took awhile for the Cardinals to get untracked with the home team netting only two field goals to trail 6-5 after one quarter.

“We were out of rhythm and probably out of shape after having limited practice last week. But we knew it would be that way to start.”

Once the second quarter came, though, the Cardinals turned on the defensive intensity, forcing 12 turnovers by Hilldale (9-9) in the period.

Chancellor had a steal and fast break basket to go along with a pair of 3-pointers in the spree.

Kylee McGuire, who opened the scoring in the game for Verdigris with a trey, also had a steal and layup in the explosion.

“It was a little boring at first,” McGuire said about the Cardinals’ start to the game.

“But then we finally got going and started hitting our shots.”

McGuire finished with a pair of baskets from beyond the arc along while hitting both of her free throws and grabbing three rebounds.

Lexy Borgstadt finished with a double-double with 11 points and a game-high 12 rebounds.

Morgan Borgstadt added 9 points off the bench, and Megan Turner chipped in 7, including 4 of 5 free throws in the Cardinals’ balanced scoring attack.

As a team, Verdigris went 14 of 17 from the free throw line while committing only seven turnovers. The team had only one miscue in the second half.

BOYS | Hilldale 67, Verdigris 51: For the second-straight game, the Cardinals had an uneven performance, not shooting the ball well while surrendering points off their own turnovers.

But in the second quarter, the Cardinals committed 12 turnovers. Those miscues resulted in the team taking only eight shots and making only two field goals in the period.

Meanwhile, Hilldale (14-4) outscored the Cardinals by 10 points in the second quarter to move in front 29-17 at halftime.

“We had 16 turnovers and 17 points, and we were still only down by 12 points at halftime,” Verdigris coach Chris Houk said.

“We are struggling with our identity as a team right now,” he added. “But we will find it. We will get back to work tomorrow.”

Trent Haddock had a trio of 3-pointers in the second half for Verdigris, while Jaren Keith added 10 points.

Brant Hager just missed a double-double as he tallied 8 points while snaring a team-high 12 rebounds.

“I just try to find my role on the team each game whether it is getting rebounds or if it is scoring points,” Hager said.

“We let them determine how we played tonight,” Hager added about his team’s shortcomings against the Hornets.

“We didn’t do what our coaches told us to do.”

The Cardinals forced only six Hilldale turnovers, including just one over the final three quarters.

Reserve Ethan Bell notched 10 points, including canning a pair of 3-pointers for Verdigris while Brock Fugate scored 6 points and had 4 rebounds—all in the second half.