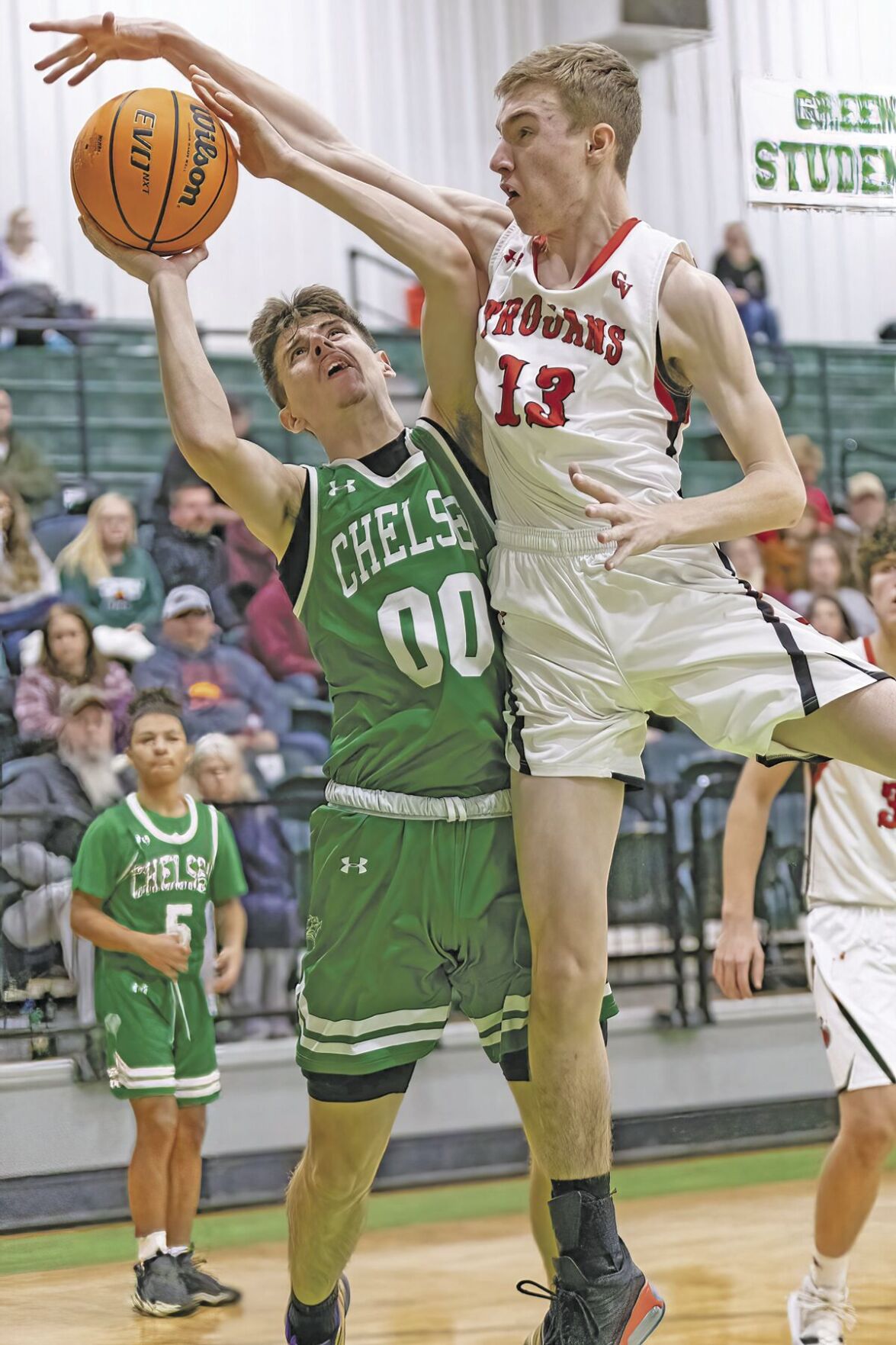 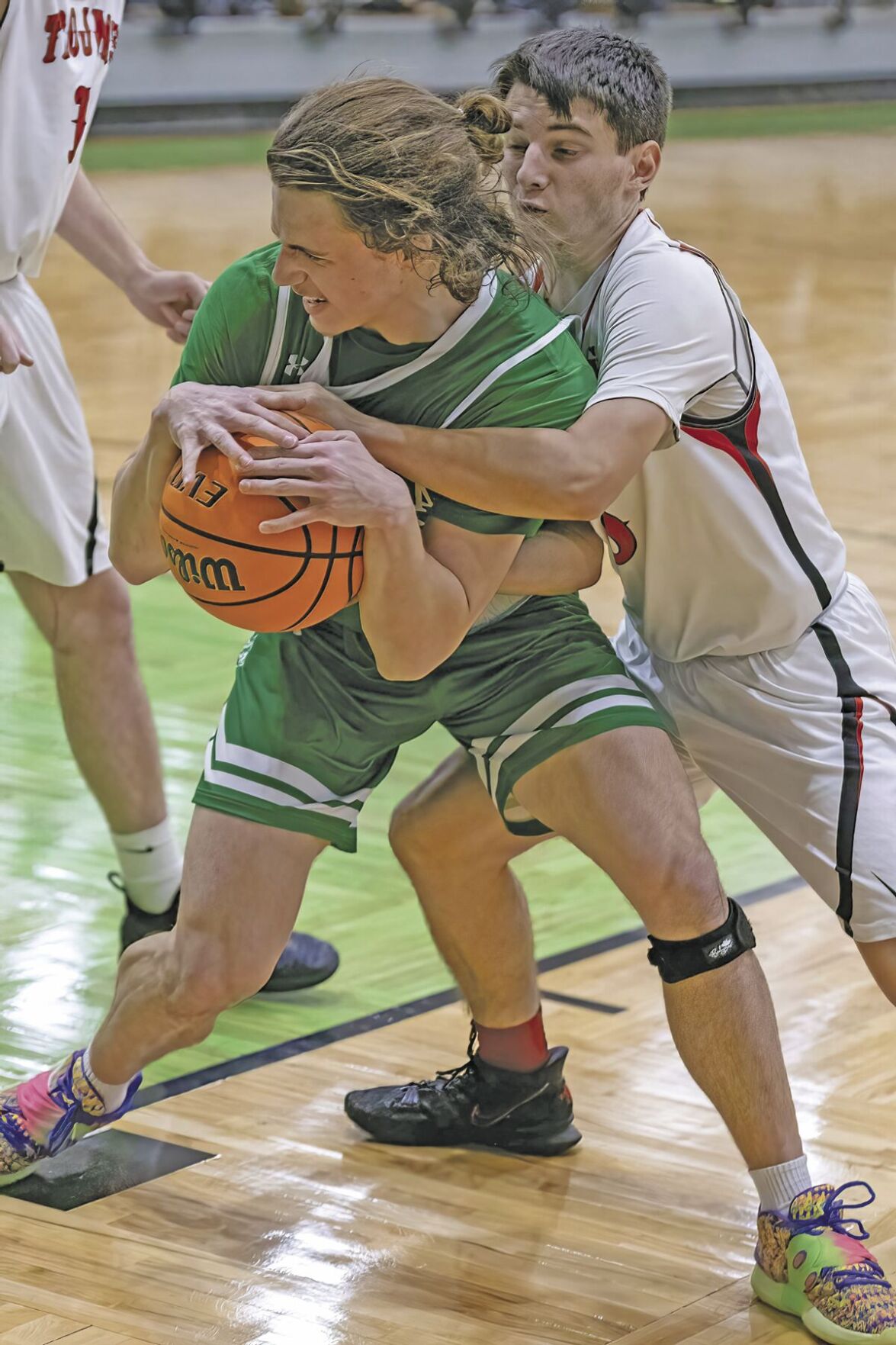 CHELSEA — Carson Lawhorn is a rugged post player who doesn’t mind doing the dirty work in the paint.

So when he missed a close-range shot with three seconds remaining in the third quarter, he didn’t hesitate to leap above two Nowata players for an offensive rebound and putback just before the buzzer.

“He’s just a workhorse,” Chelsea coach Jamie Quigley said of Lawhorn, who finished with six points and seven rebounds. “He’s a rebounder and a defender. He’s all heart. He gets after it and does all the dirty stuff for us and bangs around down there on the defensive post. Nobody gets credit for that usually, and he takes pride in that. That’s a huge thing for teams, when you got kids who will just grind it out when they have to.”

Chelsea trailed by 10 during the frame, but that muscly maneuver was an instrumental moment during the Green Dragons’ 16-6 run that was capped by consecutive 3-pointers from Kyran Nelson and Koby Reed to tie the game at 34 early in the fourth.

Unfortunately for Chelsea, those heroic efforts were in vain. The team’s 3-of-9 shooting performance at the free-throw line ultimately cost the Green Dragons in a 49-44 loss to the Ironmen in the inaugural John Michael Humler Memorial Tournament championship Saturday at Dale Wilson Memorial Gymnasium.

In comparison, Nowata shot 9-of-11 from the line.

“It was a big part of the game, missing free throws,” said Quigley, whose team made 18 of 22 free throws in the semifinals against Caney Valley. “We do work on them; that’s what’s crazy about it. But it was just an off night. We don’t normally shoot like that. That’s sometimes the way it goes, but the one thing I love the most is they kept battling and fighting their way back in it.

“You can’t miss free throws in big games. Hopefully it’s something we’ll learn once we get in the playoffs. You don’t expect to shoot like that in your own gym.”

Despite forcing two ties in the final eight minutes, the Green Dragons never could secure a lead. In fact, the Ironmen never trailed throughout the entirety of the contest despite losing the turnover battle 13-5.

Reed scored four-consecutive points to produce the final equalizer at 41-41 with 2:37 remaining, but Nowata scored the next six points to all but put Chelsea away.

Nelson hit a 3 at the 0:08 mark to make it a manageable 47-44 differential, but Nowata’s Jace Thompson sunk two free throws with three seconds remaining to bring the score to its final resting place.

Nelson scored all eight of his points in the fourth period, including two 3-balls. Reed finished with a game-high 20 points and four boards while Logan Quigley added 10 points and five rebounds.

“Kyran is a good shooter; he’s kind of streaky,” Jamie Quigley said. “He’s one of those kids that once he gets going, you just leave him on the floor and let him do his thing. Koby is a good offensive player for us, and Logan. All three are seniors, and they put a lot of work in. They do some good things. Logan got off early but in the second half didn’t get many looks, so that slowed us down offensively. But him, Koby and Kyran are our only seniors, and at times they look like it. They were ready to go.”

It was Nowata’s second victory over Chelsea in less than a week, having defeated the Green Dragons 43-37 on Monday, Jan. 3.

“We’ve had a tough road of it, and we’ve played some really tough teams,” Jamie Quigley said. “We haven’t had a weak opponent yet. This year has been a battle to get over the hump, but they’re sticking together, and that’s a sign of maturity.”

The senior duo combined for 38 points, with Reed scoring 23 as Logan Quigley chipped in 15. The Green Dragons went 18-of-22 from the free-throw line, with Reed making 15 of them.

Chelsea 55, Claremore JV 39 (Thursday): Jaden Perry didn’t score in the final two games of the tournament, but he certainly showed out in the opening round.

Reed hit four of the team’s nine 3-pointers, including three in the second quarter, to finish with 14 points. The Green Dragons outscore Claremore JV 21-10 during that explosive second period.

Reed led all scorers with 18 points, and Logan Quigley reached double figures as well with 13.