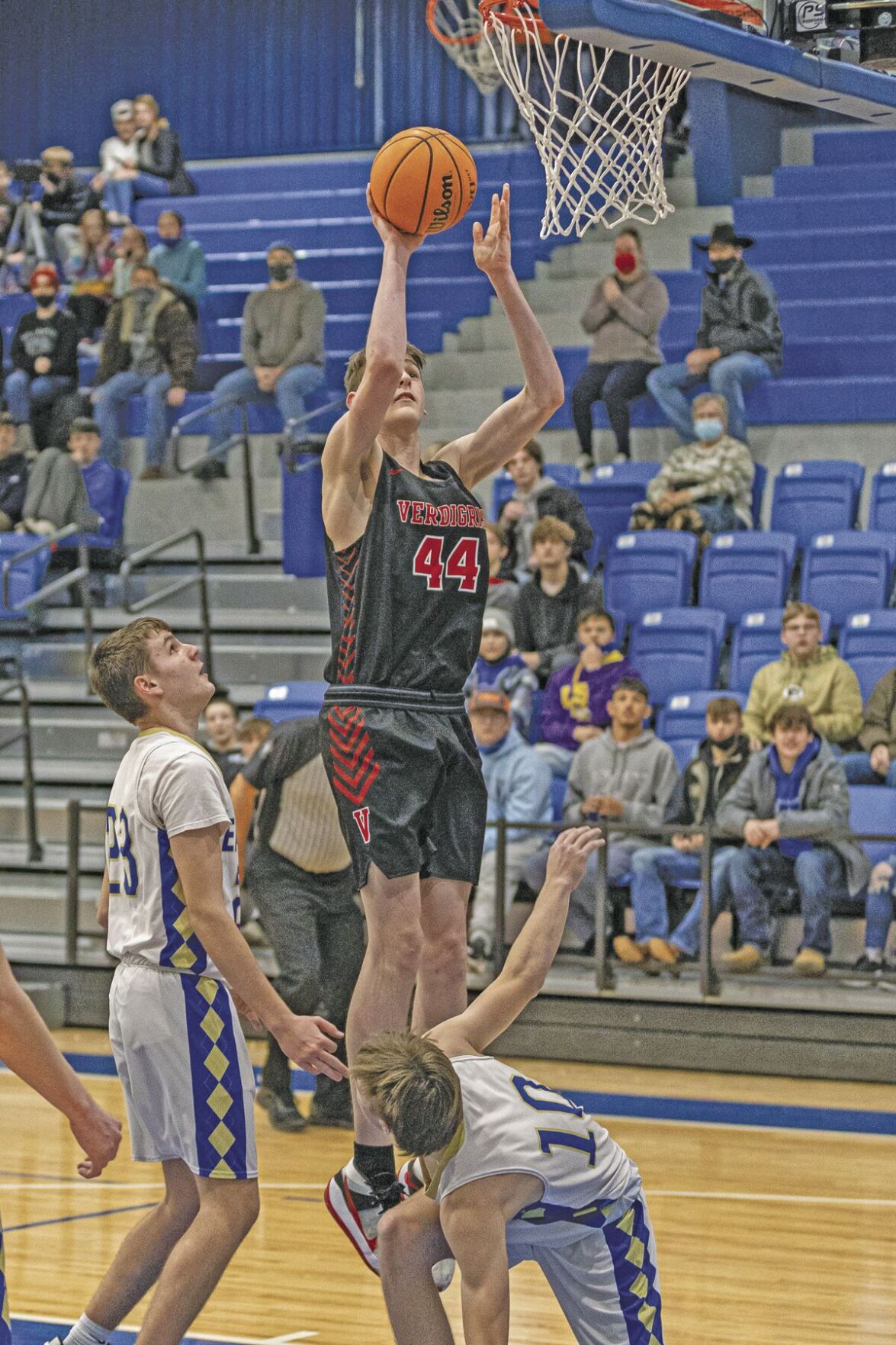 Verdigris junior Lucas Lechlider (44) hits the game-winning shot over Sequoyah’s Cooper Thompson (23) and Karson Bickel (10) with 0.9 seconds remaining to give the Cardinals a 55-54 victory Friday afternoon. 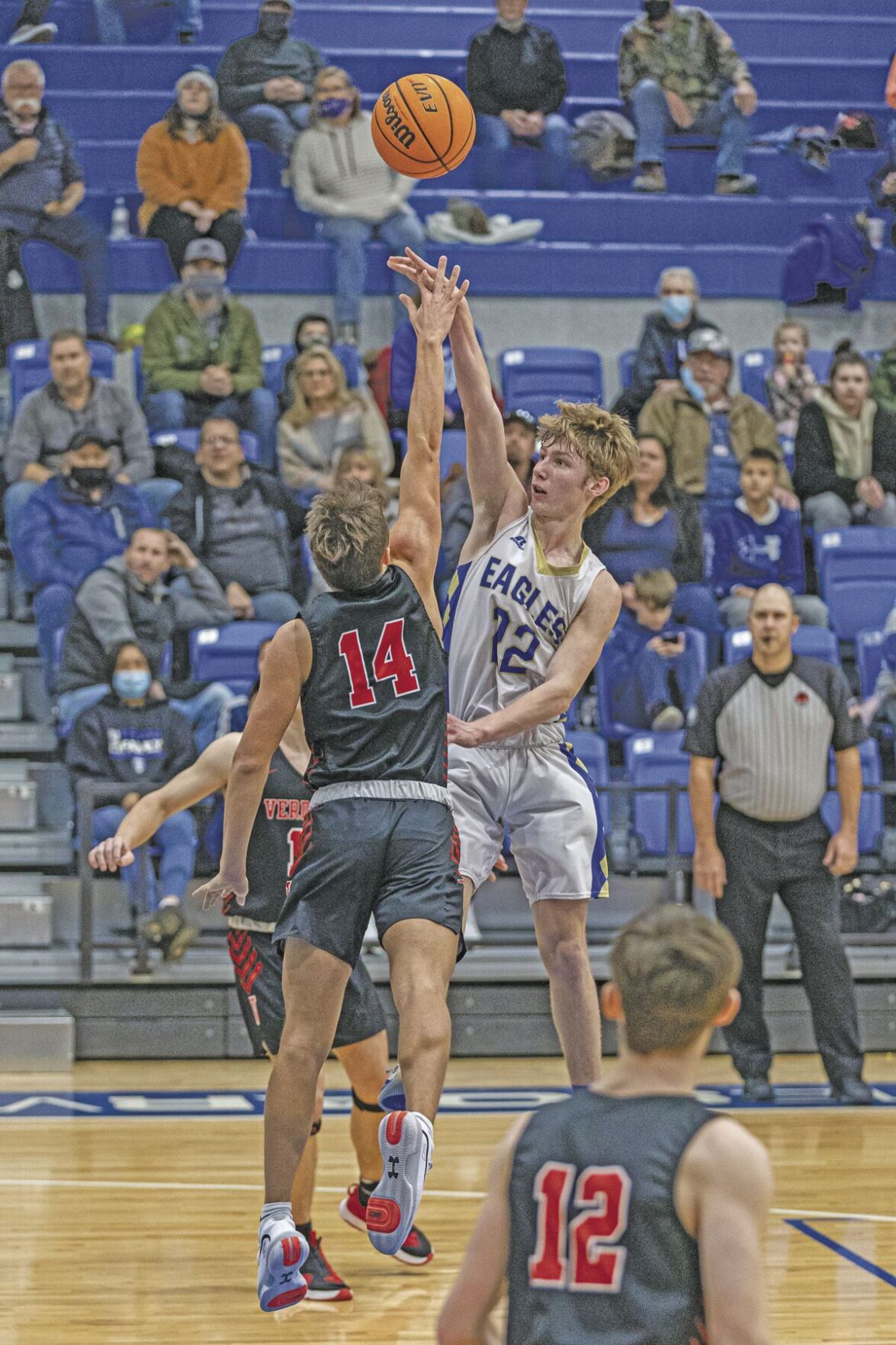 Sequoyah junior Eli Wood (22) shoots a floater over Verdigris sophomore Dylan White (14) with less than 10 seconds remaining in regulation. Wood made the shot with four seconds to go, but it wasn’t enough to secure the win.

Verdigris junior Lucas Lechlider (44) hits the game-winning shot over Sequoyah’s Cooper Thompson (23) and Karson Bickel (10) with 0.9 seconds remaining to give the Cardinals a 55-54 victory Friday afternoon.

Sequoyah junior Eli Wood (22) shoots a floater over Verdigris sophomore Dylan White (14) with less than 10 seconds remaining in regulation. Wood made the shot with four seconds to go, but it wasn’t enough to secure the win.

These passionate Eagles tried everything they could possibly do to get in the 6-foot-7 Verdigris junior’s head. They used incorrect stat lines to disrupt his concentration and tried to use his lack of dunks as a way to create doubt in his ability to perform such a shot.

“It fueled me, definitely,” Lechlider said. “It just showed me that I needed to prove them wrong and do something to counteract their words.”

He accomplished just that when he caught an inbounds lob pass from Dylan White and converted a close-range shot with 0.9 seconds remaining to hand Sequoyah a heartbreaking 55-54 loss Friday afternoon at Olan Graham Field House.

That lay-in came moments after White used his quarterbacking skills to complete a half-court pass to Lechlider with 2.9 seconds remaining, setting up a better inbounding opportunity in the frontcourt.

“I thought we had it defended well, but it was a good pass with perfect timing, and sometimes you just can’t do anything about it,” Sequoyah coach Larry Grigg said.

As a result, Class 4A No. 9 Verdigris extended its winning streak to 17 games. The Cardinals haven’t lost since the second game of the season, a 61-49 decision against No. 4 Victory Christian on Dec. 8 at the Jerry Oquin Tournament in Inola.

“It’s definitely a scary thought,” said Lechlider, who finished with 10 points and five rebounds. “I just wanted to make my team proud. Our coaches went over it and told me exactly what I needed to do, and I just executed, I guess.”

Six of Verdigris’ past eight games have been decided by single digits, but for a moment it seemed as if its luck had finally run out.

After taking the ball near halfcourt, Sequoyah junior Eli Wood – guarded by White – drove left toward the key, spun right, cut left and spun right again before swishing a right-handed floater to give the Eagles a 54-53 lead at the 0:04 mark.

“He’s kind of our all-around player,” Grigg said of Wood, who tallied 12 points and three rebounds. “He does good things offensively and defensively, and he’s probably not our leading scorer, but he does a lot of the dirty work.”

That effort put a temporary pause to an 11-1 Verdigris run that saw the Cardinals erase a nine-point deficit to take a 53-52 advantage. Verdigris senior Jaren Keith scored all nine of his points during that spurt, and Lechlider had the other two.

“We gotta have those plays,” Cardinals coach Chris Houk said. “Those guys have to step up, and our luck, how many times is that going to happen? It just keeps happening and keeps happening. You gotta have somebody step up, and Jaren stepped up. It just comes down to those big plays, and somehow we’ve done it all year. There are so many things that can go wrong, but somehow we’ve been able to make them go right.

“You’re waiting as a coach until that runs out, but you just hope it keeps going.”

Verdigris (18-1) broke a 30-all halftime tie to take a five-point lead early in the third quarter, but Sequoyah answered with an 11-0 run that carried into the fourth to pull ahead 43-37.

The Cardinals scored the next four points, but a 3-pointer from Cooper Thompson, followed by a pair of Karson Bickel free throws and a three-point play from Kaleb Bickel helped balloon the Eagle lead to 51-42.

That is when Keith came alive offensively, though, setting the stage for Verdigris’ dramatic finale. Trent Haddock played a significant role for the Cardinals as well, pacing them with 16 points and five rebounds. Eight of those points came in the first period, helping Verdigris garner an early 10-2 lead.

“It’s a heartbreaker, but I told them, ‘If you play that well in the playoffs, you’re liable to win some,’” Grigg said. “In a one-point game, you can go back through the whole game and look at plays, look at coaching decisions and it’s pretty easy to pick one (game-changing mistake) out.”

Murrel Cowherd passed away Sunday, February 14th in Tulsa. The youngest of four sons, he was born April 5, 1926 in Hickory Ridge, near Wetumka, Oklahoma. He proudly served in the U.S. Marines from 1944 until 1947. Murrel worked for PSO in Weleetka, Oologah, Jenks, and Tulsa, retiring in 1991…