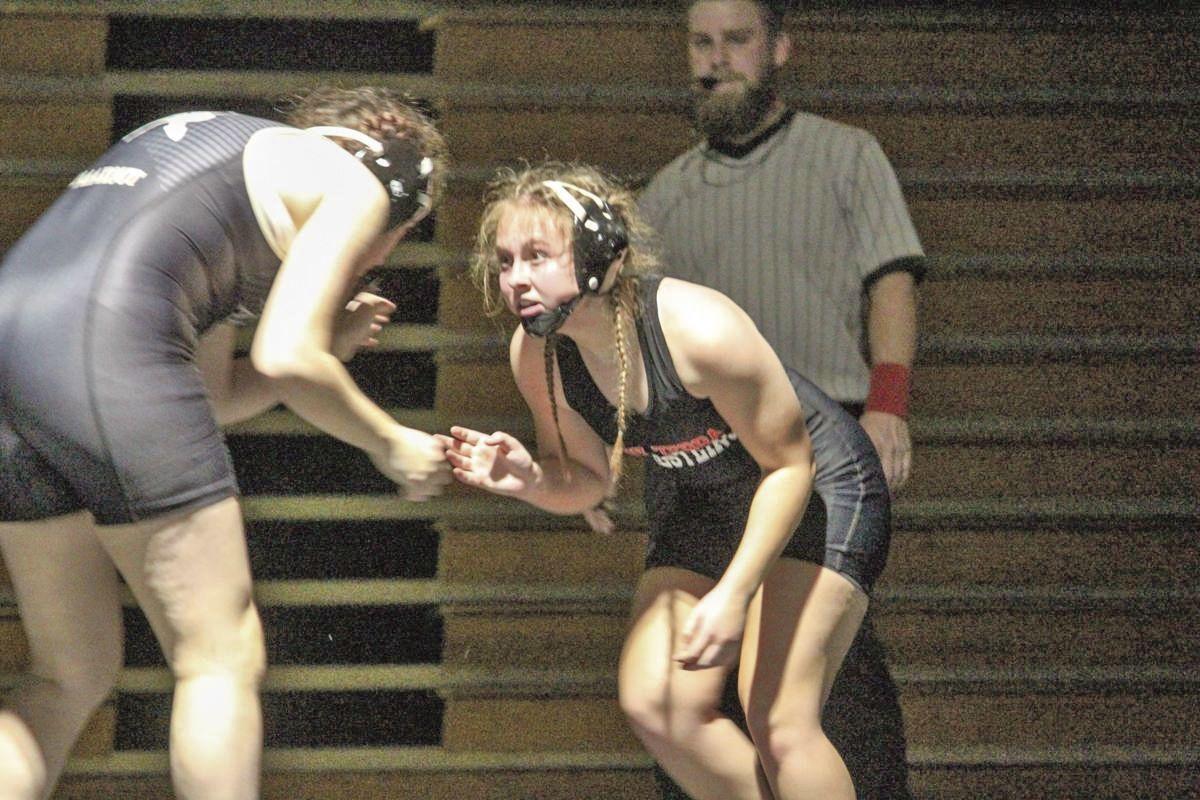 Claremore senior Rose Grubowski traps her opponent in a headlock during the first all-girls wrestling dual in state history on Dec. 6 inside Frank Mobra Gymnasium. Grubowski is a state champion dancer, but she learned the ropes quickly and split her two matches against the Lady Tigers. 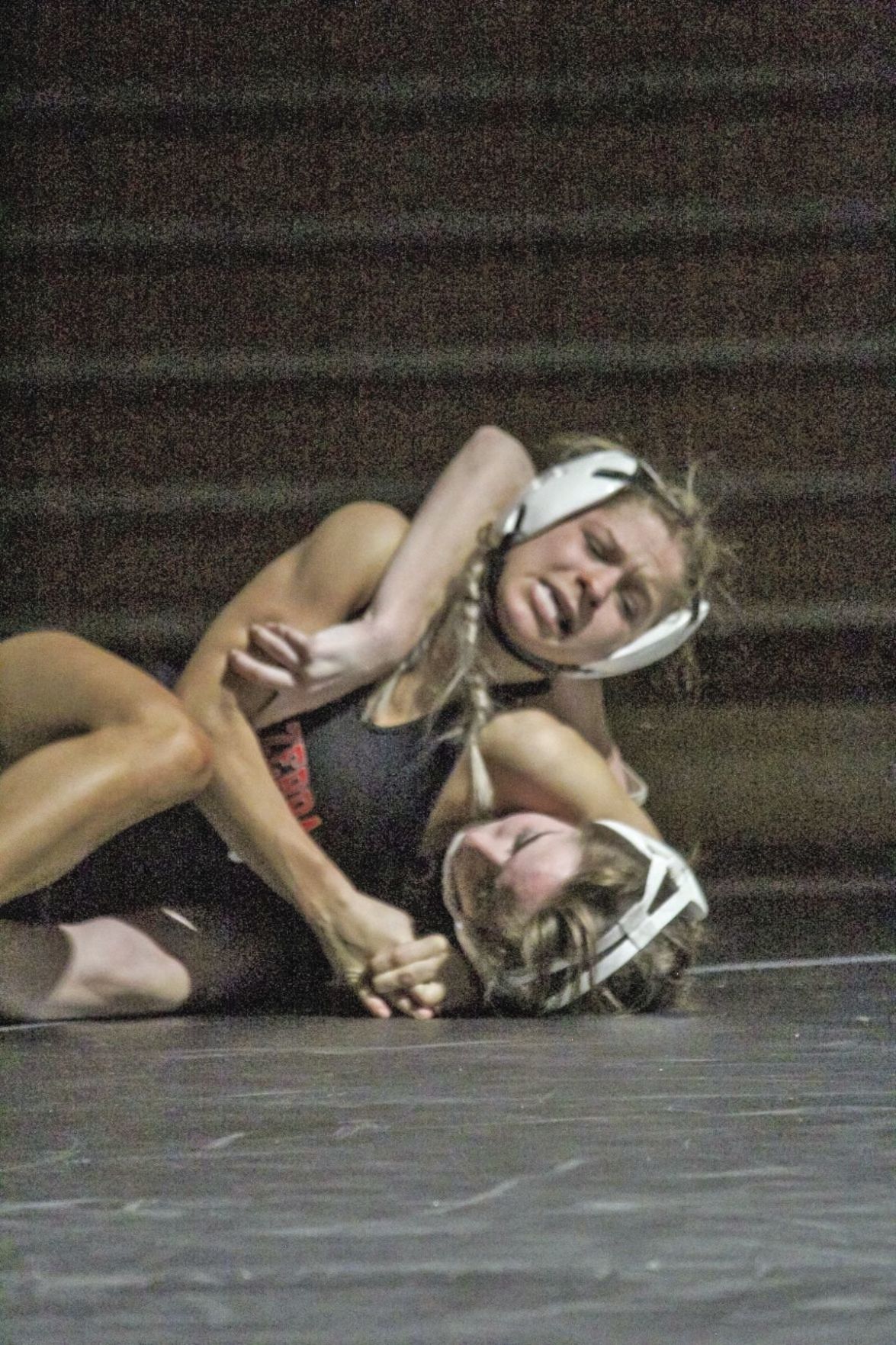 Sunnie Mae Rhode sizes up the opposition from Broken Arrow inside Frank Mobra Gym on Dec. 6. Rhode lost both her matches, but she is working toward wrestling in college.

Claremore senior Rose Grubowski traps her opponent in a headlock during the first all-girls wrestling dual in state history on Dec. 6 inside Frank Mobra Gymnasium. Grubowski is a state champion dancer, but she learned the ropes quickly and split her two matches against the Lady Tigers.

Sunnie Mae Rhode sizes up the opposition from Broken Arrow inside Frank Mobra Gym on Dec. 6. Rhode lost both her matches, but she is working toward wrestling in college.

Editor’s note: This is Part 3 of a series chronicling the first all-girls wrestling dual in Oklahoma history.

CLAREMORE — There are no shortcuts to athletic success, but not all athletes aspire after the same goals.

Some simply look to perform the best within their means. Others aim to continually improve and become the best at their craft. There are also those who seek the camaraderie of sports, craving to be a part of something great.

Regardless of the objective, these athletes all have one thing in common. They must prove themselves by being coachable, teachable and trainable.

Spectators witnessed the forging of those three qualities during the first-all girls wrestling dual in Oklahoma history at Frank Mobra Gymnasium on Dec. 6.

For Barbara Bacon, joining the wrestling team was about leaving one sisterhood to build another.

Bacon focused her efforts on soccer for most of her childhood, but she decided to broaden her sporting horizons in middle school by joining volleyball.

She admitted she wasn’t the best at the sport, but she did form a bond with teammates over the years. Her class was instrumental in leading the Lady Zebras to consecutive state tournament appearances in 2017 and 2018.

That made her decision to forgo volleyball her senior year that much more difficult.

She felt called to become a founding member of Claremore’s girls wrestling program, and splitting her time with volleyball wasn’t a viable option.

It was one or the other, and she chose to delve into the exciting world of the unknown once more.

“I did grow a bond with that team, so it was kind of sad to leave them behind,” Bacon said. “But in the wrestling room, it’s so different because it’s a boys sport. It’s different to experience that perspective of it not being about girl emotions. It’s about how you wrestle, not anything else.”

Bacon’s journey to the wrestling mat began in the weight room.

It was there she spent time getting to know some of the wrestling boys, and that piqued her interest in the sport. Their energy was contagious and made her want to give wrestling a try.

She thought she made the wrong decision at first.

“I started going to some of the late practices, and I absolutely hated it after the first practice,” Bacon said. “I was like, ‘What the heck is going on?’ Then I started to grow to love it once I started to understand the moves. I also noticed a lot of change in my body, and I was losing weight and getting in shape.

“Even though it’s really tough, it has a lot of reward to it.”

Learning how to handle being under pressure on the mat was perhaps the toughest challenge for Bacon.

She’d often find herself in unfavorable situations in which her inexperience hindered her ability to escape. She didn’t know what to do just yet.

Her patience was rewarded on Dec. 6 when she split her two matches against competition from Broken Arrow.

“It feels amazing,” Bacon said of having her arm lifted after winning a match. “It makes all the sprints, conditioning and tears all worth it in that moment.”

The Claremore senior didn’t understand why he would recruit a dance state champion to the wrestling team, and her concerns were valid. Dancing and wrestling don’t exactly mix.

But for reasons unbeknownst to her, she showed up to practice anyway, and it didn’t take her long to realize why she was hesitant in the first place.

“It was hard,” Grubowski said. “It was really hard. I was tired after the warmup. I was like, ‘Wow, this sucks.’”

Wrestling slowly grew on her, though, as was the case for most of her teammates. Once she started picking up the moves, Grubowski developed a love for her new endeavor.

That is where her dance experience came into play. She had to be coachable, teachable and trainable to learn techniques and moves, and she was determined to prove herself and do just that.

“It helped me be a little more coachable after being in sports other than this, which is completely out of the comfort zone of what dance is,” Grubowski said. “It is the ability to come in the room and work hard and know even if I don’t know exactly what I’m supposed to be doing or I don’t understand the move, I still have that mentality to come in there and do something different.

“It’s a team sport, but it’s all dependent on you. You putting the work in and you getting that pin for the rest of your team. I love everything about it.”

Grubowski’s hunger to be great grew even more after she split her two matches with Broken Arrow on Dec. 6.

Although dancing and wrestling are polar opposites in the world of sports, she managed to identify the similarities between the two.

Whether it’s her arm being raised in wrestling or her name getting announced in dance, the winner’s mentality within her never ceases. Both sports bring about the same irreplaceable feeling that she craves.

“It’s like somebody just sent volts of electricity through your body,” Grubowski said. “Having that drive to get to that point again—dance state or wrestling state—it’s something you can’t describe. It’s a want that never goes away.”

“She was talking about cauliflower ear and staph infections,” Rhode said. “She was like, ‘No, I don’t want you to do (wrestling). It’s a contact sport. What happened to you wanting to be on the dance team?’”

When looking into wrestling and the risks involved, those are certainly common concerns.

However, Rhode was willing to compete in those hazardous conditions to carry on her family’s legacy.

Her dad and uncle wrestled in high school, and her grandfather coached at varsity and collegiate levels during his time with the sport.

Rhode had a tradition to uphold, and she wasn’t going to let sex and gender differences hold her back.

“(My grandfather) thought my uncle was the last generation of our family to actually be in wrestling,” Rhode said. “He’s proud that it’s continuing, and he’s proud I don’t have to wrestle boys.

“I don’t regret it. I enjoy being in the room and on the mat.”

Even Claremore girls wrestling coach Crystal Klaver sees the impact Rhode is making on her family.

“I wish you could see the look on her grandpa’s face when he comes to duals to watch her,” Klaver said. “His face lights up, and he’s so proud to come watch her.”

Even her mother has come around to the idea of Rhode wrestling, and she now enjoys recording every match her daughter competes in.

“She is more supportive, and she was actually really upset she didn’t get to come to our very first dual we had,” Rhode said.

Rhode lost both her matches on Dec. 6, but her wrestling aspirations haven’t dropped in the slightest. In fact, they have only grown.

Backed by the blessing of her supportive family, she now wants to wrestle collegiately.

If her drastic improvements on the mat thus far are any indication, she is more than capable of accomplishing that goal.

“I have improved, especially with the aggression aspect of wrestling,” Rhode said. “I now put up a fight instead of just handing them the win.”

Markeyta Carter is no stranger to playing rough.

Growing up, she was the only girl on an all-boys t-ball team. That alone subjected her to an environment of negativity and tough love.

“I always got picked on, but I tried to be tough and do anything the boys did,” Carter said.

Keeping with her tough-girl nature, Carter found herself interested in the prospect of an all-girls wrestling team at Claremore.

Willard and Klaver sold her with their pitch, and she enjoyed the sport right away. To say she was excited to be a part of history on Dec. 6 would’ve been an understatement.

So she was understandably crushed when she found out she couldn’t compete in Oklahoma’s first all-girls wrestling dual.

Carter works at Braum’s, and her already scheduled shift conflicted with the dual. She pleaded with her manager, but there was no one available to fill in for her. Nothing could be done.

“I was upset about it, and I actually cried,” Carter said.

However, she has since taken the necessary steps to make sure something like that never happens again.

“I now have my scheduled changed to where I’ll be off every match we have,” Carter said.