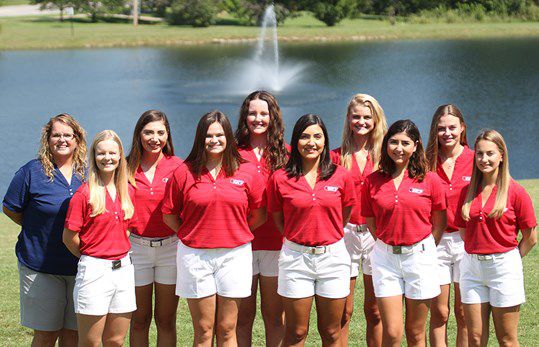 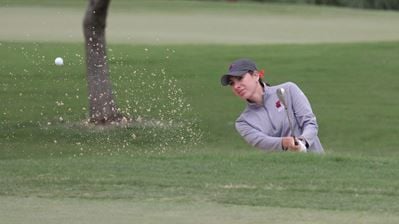 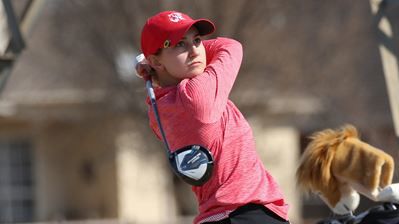 Rogers State senior Sydney Murray keeps her eyes on the ball after teeing off during October's Arkansas Tech Golf Classic in Danville, Ark. 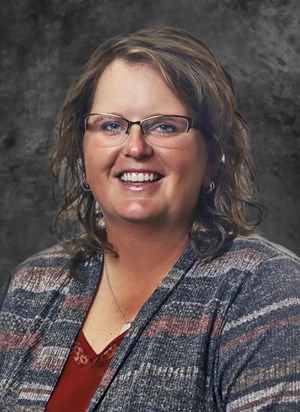 CLAREMORE — Just a week ago, the Rogers State University women’s golf team was on the top of the world.

The Hillcats had claimed their second team title of the 2019-20 sports year and first of the spring season on March 10 by winning a playoff against the University of Central Oklahoma to capture the championship of the Diffee Ford Lincoln Invitational in Edmond.

RSU junior Jessica Green was the event’s medalist in the two-day, 36-hole event.

A promising spring seemed to be on the horizon for coach Whitney Hocutt and the nine-member squad of Hillcat linksters.

But two days later the season came to a screeching halt for the RSU women.

The school’s athletics department, in conjunction with the NCAA and the Mid-America Intercollegiate Athletic Association—the conference in which Rogers State is a member—announced March 12 the postponement of the remainder of the 2019-20 athletic season to include winter and spring sports competition.

The announcement came on the heels of the NCAA cancelling earlier that day all remaining winter and spring sports championships for all levels of the association in response to the COVID-19 public health threat.

Suddenly, the RSU women were looking at the possibility of not playing for the remainder of the spring, much less be in contention for another team or individual title such as they had experienced a week earlier.

“We had just come off a great win in Edmond,” said Hocutt as she recalled this week the momentous events of a week ago that helped result in a suddenly different sports landscape in this country.

“We were able to hold on to the team victory, winning the title in a playoff. That was icing on the cake as I look back now.”

“I know we would have made it to (NCAA) regionals if not nationals,” Hocutt added about her thoughts of the potential she saw in this year’s team that will never be known with the NCAA cancellations.

Hocutt, who is in her third year as RSU’s head coach, said she knew she was faced with having to convey the news of the postponements and cancellations to the team, which was preparing for its next action—the Hillcat Classic—a combined women’s and men’s event scheduled today and tomorrow (March 16 and 17) at Bailey Ranch Golf Club in Owasso.

“We would be on the golf course today, no doubt about it,” Hocutt said today on what would have been the first day of the Hillcat Classic.

“We had three girls who were qualifying for two spots to play in the tournament,” she said of what was scheduled to be a 10-team event for the women.

While seeing team members practicing on the Bailey Ranch course and after they had reached the ninth hole, Hocutt called the team into the clubhouse’s ballroom to deliver the news.

“It was the hardest discussion I have ever had with my team,” the head coach admitted.

“It was really uncharted territory. I didn’t think it was anything I would ever tell our two seniors (Mariana Flores and Sydney Murray) who had helped carry our team,” Hocutt added.

Both Flores and Murray are four-year members of the program.

As the news unfolded from Hocutt to team members, she said: “It was a shock. The emotions then hit and the questions started rolling in.

“I expected the questions,” the head coach added, “but I didn’t have the answers. I told them, ‘I don’t have answers for you right now. I hope you get your eligibility back, but I don’t know that yet.’”

As it ends up, the NCAA did announce late last week that student-athletes in spring sports, including those in the senior class, would be granted an extra year of eligibility, though details of that announcement remain to be resolved.

That announcement was welcome news for the Hillcat seniors—Flores from Mission, Texas, and Murray from Wichita, Kan., both of whom had already planned to return to RSU for the 2020-21 year.

Flores, who has two younger sisters (Raquel and Paulina) on the RSU women’s golf roster, has finished a degree in psychology and this year began classes toward a degree in sports management.

Meanwhile, Murray changed majors this year to allied health/pre-athletic training and plans to pursue completion of a degree during the next academic year.

“They (the two seniors) are both great students and are a great benefit to us,” Hocutt said.

While the head coach hopes that the suspension of action for women’s golf might be lifted before the regular season ends this spring so the team can return to the course, she is already looking ahead to the future.

“After all this, I think we can come back and be better than ever,” said Hocutt, who was a three-time team MVP during a four-year career on the links while attending and playing for RSU.

“I believe that everything happens for a reason.”

Still, she harkens back to a season that most likely will never be fully realized.

“Obviously, I hated bringing that news (suspension of play, NCAA cancellations) to our seniors in the middle of the season,” Hocutt added.

“It makes your heart hurt. It’s kind of like having a knot in your stomach. But we just have to move forward and get ready for the fall.”