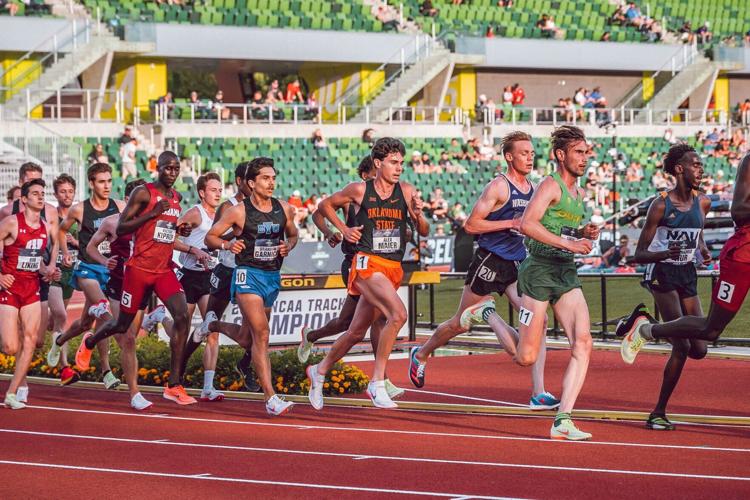 Oklahoma State distance runner Alex Maier finished as the runner-up in the men’s 10,000-meter race at the 2022 NCAA Outdoor Championships on June 8 in Eugene, Oregon. 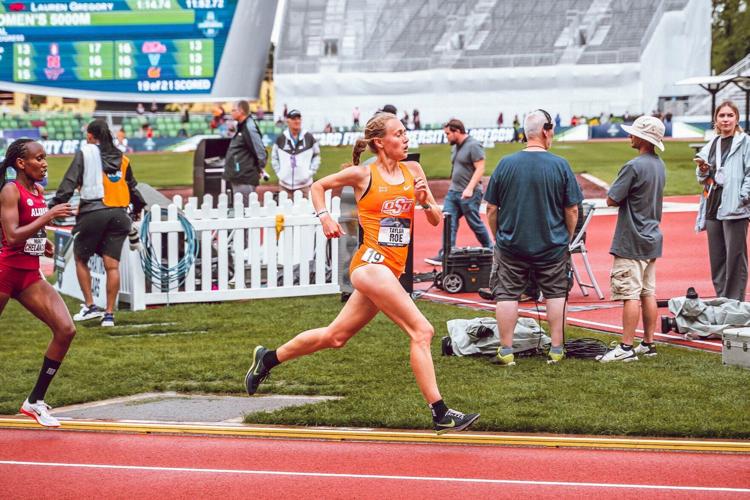 Oklahoma State distance runner Alex Maier finished as the runner-up in the men’s 10,000-meter race at the 2022 NCAA Outdoor Championships on June 8 in Eugene, Oregon.

If she isn’t attracting too much hype as a potential front-runner, then she faces less pressure during a race, she said.

But as the medals pile up, Oklahoma State coach Dave Smith reminds Roe to accept her growing prestige among cross-country and track and field aficionados.

“People are starting to realize, slowly but surely, how truly remarkable she is and has been,” Smith said. “She’s starting to get a little bit of attention on the national level. I think over the next year or two, that will continue to rise, and again, with that comes added, maybe, pressure or stress that she has to learn how to deal with.”

Roe, a sophomore distance runner on the Cowgirl track and field team, placed third in the women’s 5,000-meter race Saturday at the 2022 NCAA Outdoor Championships in Eugene, Oregon. With a time of 15:24.41, she was one of three OSU runners to achieve a podium finish. Sophomore distance runner Alex Maier represented the Cowboys as the runner-up in the men’s 10,000-meter race June 8, and Cowgirl freshman Gabija Galvydyte placed third in the women’s 800 on Saturday.

Their individual successes propelled them to first-team All-America recognition, but for Roe, the third-place finish is more of a springboard than a bar to reach. As she puts track season behind her and gears up for hosting cross-country nationals in the fall, Roe is focusing on the big picture for the approaching year: team improvement.

“Now, it’s like we have an opportunity for us all to do something together as a team, and that’s the new step,” Roe said. “That’s the bar, is, ‘OK, I’ve been able to do it, but how do I get everyone else around me to do it, too?’ So I think that’s just the next step is leaving an impact on our program, just making our program rise, not doing it so individually.”

Both OSU track and field teams finished in the top 20 at NCAA Outdoors, where Florida swept the competition. The Cowgirls tied for 15th with Alabama, while the Cowboys found themselves in a five-way tie at 18th.

With the men’s and women’s championships each including representatives from more than 100 teams, just breaking into the top 20 with five All-Americans is an achievement to cap a “great year all around,” as Smith described it. But he isn’t regarding it as the ceiling for the Cowboys’ and Cowgirls’ potential.

Much of OSU’s increasing momentum flows through Roe and Maier, who are returning for next season. They have different backgrounds – the expressive, perfectionist Roe hails from Lake Stevens, Washington, while the reserved, engineering-minded Maier is from Flower Mound, Texas – but Smith drew a key parallel between the distance runners.

When people overlook them, they use it as fuel.

“I think Alex, he is a blue-collar, hardworking, grinding-type athlete that doesn’t get a lot of recognition or appreciation,” Smith said, “but has been quietly building his resume over the last few years to this point and to the two years that are coming beyond this. He’s not done improving. He’s not done moving up the chain.”

Not even Smith could predict Maier’s level of success at outdoor nationals. Smith said he anticipated Maier would finish somewhere from fourth to 10th, but the second-place surprise wasn’t a surprise at all to Maier, who finally had a chance to showcase his skills with a time of 28:12.68 after dealing with the frustration of sickness during cross-country nationals and indoor nationals.

“To me, it feels like I’m eight months behind,” Maier said. “I’m obviously really happy with it, because it’s like going into it, all you can really do is control the factors that you can control and just go in with your best attitude and effort, and so I was really happy that things finally turned out the right way this time.”

For Roe, a third-place finish wasn’t out of the ordinary. Her multiple accolades include winning the 3,000-meter race at the NCAA Indoor Track and Field Championships in March, so Smith had to make sure she appreciated placing third instead of wishing she had performed better.

Roe has already done enough to prove herself to the track and field world. Smith said when the Cowgirls and Cowboys arrived at nationals, a group of high school girls in the stands noticed his team’s OSU gear and cheered for Roe. The teenagers had made the short trip from Washington, Roe’s home state, because they are fans of her.

People are noticing what Smith has known for a while.

The program’s progress only begins with Roe and Maier.

For the Cowgirls, first-team All-Americans Galvydyte and Gabby Hentemann have eligibility remaining. Smith said Molly Born, a 2019 cross-country All American, has been recovering from injury and should return for the fall. The Cowgirls’ 2022 recruiting class features Natalie Cook, Gatorade’s National Girls Cross Country Player of the Year.

On the men’s side, Ryan Schoppe shifts his focus back to cross-country after a sophomore track season in which he qualified for the 1,500-meter race at outdoor nationals and picked up second-team All-America honors.

As Smith continues to recruit, he said his program’s steady approach to each season pays off. He added that a former coach told him he admires OSU’s patience and discipline – traits Roe and Maier have shown while quietly elevating their careers.

“I think (with) our methods and what we do, kids who are looking at schools to go to and know what to look for, they really appreciate that side of things, how we do things,” Smith said. “And so I think the finish that these two had will help us get the next two that are gonna be better than these two.”