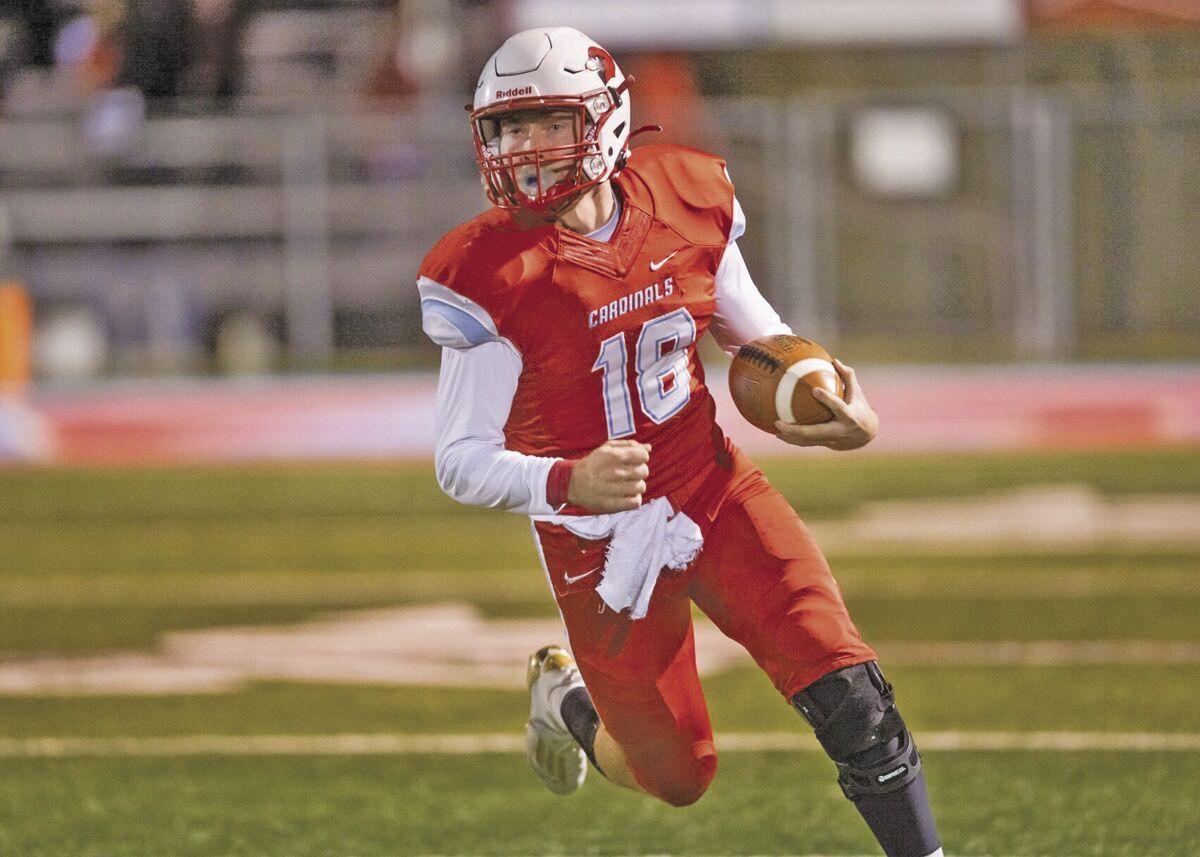 Collinsville quarterback Andrew Carney dashes down the field on one of his 33 carries Friday night against Bishop McGuinness. He rushed for 325 yards and five touchdowns. 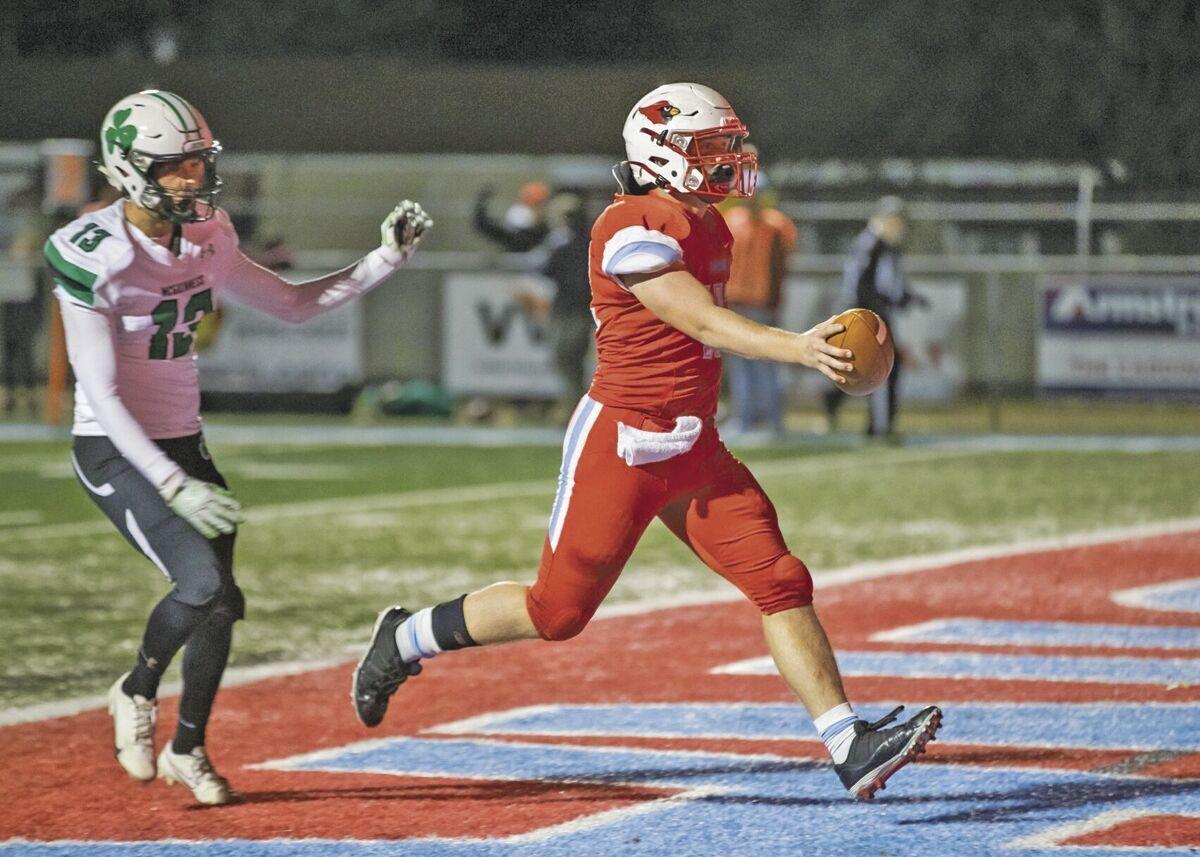 Collinsville running back Brayden Gilkey scores one of his three touchdown runs Friday night against Bishop McGuinness. He finished with 277 yards rushing.

Collinsville quarterback Andrew Carney dashes down the field on one of his 33 carries Friday night against Bishop McGuinness. He rushed for 325 yards and five touchdowns.

Collinsville running back Brayden Gilkey scores one of his three touchdown runs Friday night against Bishop McGuinness. He finished with 277 yards rushing.

His legs were burning. His torso ached from blows he took from the Bishop McGuinness defense throughout the night. But it was a good kind of sore.

The senior showed why he is considered one of the top dual-threat quarterbacks in the state, rushing for 325 yards and five touchdowns on 33 carries as he and running back Brayden Gilkey combined for 602 yards rushing in a 56-35 victory over the Fighting Irish in the Class 5A quarterfinals Friday night at Sallee Field.

Gilkey finished with 277 yards and four touchdowns on 30 carries. The Cardinals accumulated 605 yards rushing in all, with Carney and Gilkey accounting for all but one of 64 carries. Oscar Hammond tallied the only other carry, which went for 3 yards.

The performance between the two was something to behold for everyone in attendance, but it isn’t cliché to say they saved their best for last.

With Collinsville facing third-and-5 from its own 7 late in the fourth, Gilkey leveled a McGuinness safety with a pancake block near the line of scrimmage, creating a massive hole for Carney. Carney, who simultaneously cut inside to avoid an over-pursuing defender, suddenly found nothing but turf between him and the end zone.

The 6-foot-1, 195-pound signal caller easily covered the remaining 93 yards for a touchdown, capping what was already an impressive outing. The combined yardage of his first four touchdowns was only 5 yards, scoring on runs of 1, 2, 1 and 1 yards.

“Me and Gilkey are thinking, ‘OK, nothing fancy; let’s just put our toes in the ground and go get this 5 yards,’” Carney said. “He blocked it beautifully, the DB over-pursued and when I cut back, there was no one there. It was amazing.

“I would say we’re nothing short of brothers,” he added, regarding his friendship with Gilkey. “We grew up playing soccer together. Our chemistry started then, and we just played together and learned to love each other.”

Gilkey is more of a brute runner, but he also showed he was capable of outrunning the Irish.

Late in the third quarter, Gilkey broke loose for a 92-yard gain to the McGuinness 1, where he scored from a play later with 38 seconds remaining. Just like Carney’s 90-yarder, that run came from the 7-yard line as well.

Gilkey went on to score once more on a 13-yard run at the 4:34 mark of the fourth. Both of his other two touchdowns came from 1 yard out.

“Players make plays,” Cardinals coach Kevin Jones said. “We call plays, but those guys gotta go out there and make them, and (Carney and Gilkey) have been doing it for the last two years. It doesn’t surprise me; they’re just incredibly tough.”

With so much success running the ball — averaging about 9.5 yards per carry — Collinsville had little need to utilize the passing game, and it showed on the stat sheet.

Carney’s six passes were the fewest of his career as a starter. It also marked the third-consecutive week in which he has thrown fewer than 10 times.

Against the Irish, Carney completed three passes for 26 yards with an interception — his first of the season. McGuinness used that turnover to take a 13-7 lead on an 11-yard touchdown pass from River Warren to Paul Tarman with 4:11 remaining in the first quarter.

Jones said the interception didn’t play a role in his decision to focus on the run game, though.

“We just knew coming into the game that we could pound on them, and for four quarters, break them with the running game,” Jones said. “We just didn’t want to get away from that. They kept matching us and kept scoring, and if we would’ve gotten a couple of more stops on defense, we probably would’ve opened it up and really went after them with the total package. But with them keeping to match scores, we just kind of felt like we needed to keep that two-touchdown lead.”

Carney approved of the tactic, taking time to praise his offensive line, which helped Collinsville register what could be a school record for rushing yards. The previous-known high was 558 yards last year against Pryor.

“We know we can pound the ball on anybody,” Carney said. “There’s too much protein up front.”

The Irish took a different offensive approach, for they managed only 47 yards rushing while Warren threw for 389 yards on 19-of-31 passing with touchdown throws of 59, 11, 16 and 22 yards, the latter two of which came on fourth-down plays.

Tarman caught three of those scores and finished with six receptions for 188 yards. Kellen Fraile snagged a 22-yard touchdown pass — his only reception — on a fourth down that trimmed the Collinsville lead to 42-35 with 9:19 remaining.

Warren was sacked twice and registered minus-12 rushing yards while Michael Taffe led McGuinness with 59 yards and a touchdown on the ground on 19 carries.

In all, the Cardinals outgained McGuinness 631-436.

It will be the second-consecutive semifinals meeting between the teams and third in four years. The Titans ended undefeated seasons for the Cardinals in 2018 and 2020 with wins of 37-20 and 45-28, respectively.

Carl Albert is 17-0 all-time in semifinal games, but Carney said he believes Collinsville has the pieces to end one of the most impressive streaks in Oklahoma high school football history.

“Freaking Carl Albert, man,” Carney said. “They’ve won it every time, and I’m about tired of it. I know that’s the mindset of every football player on our team. It’s not going to happen again.”