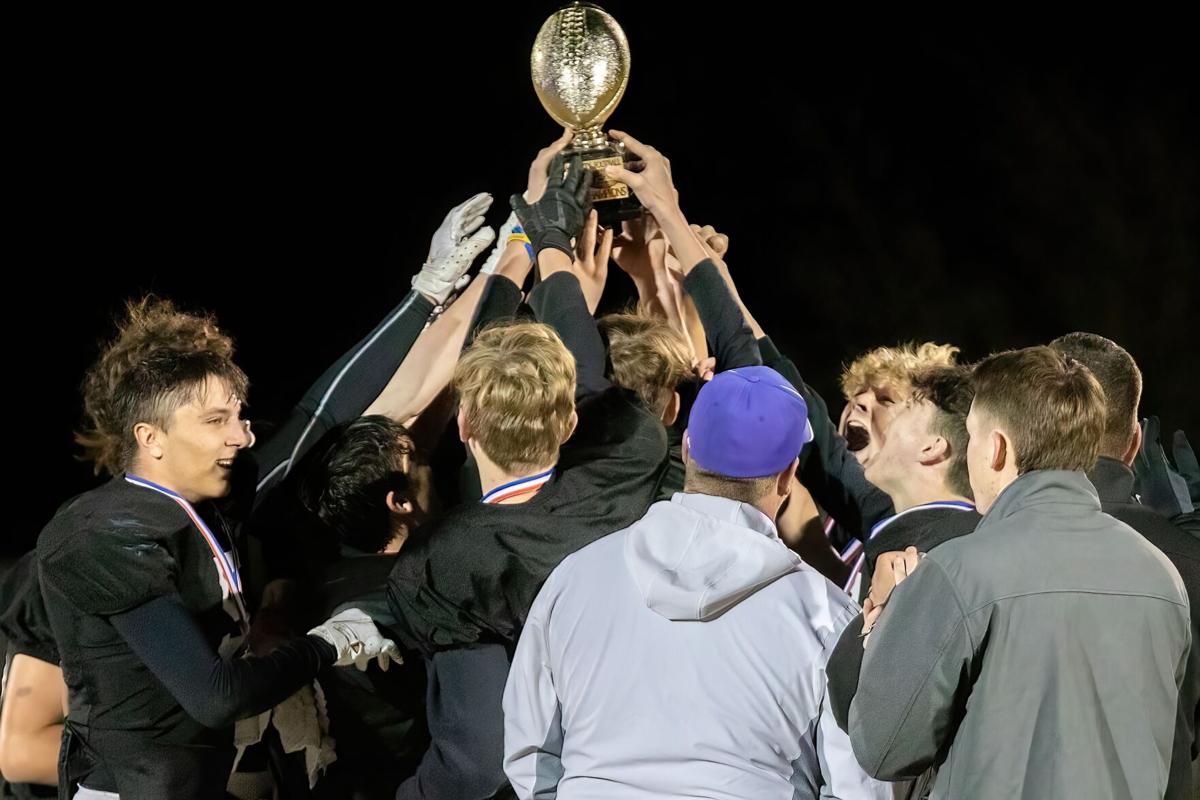 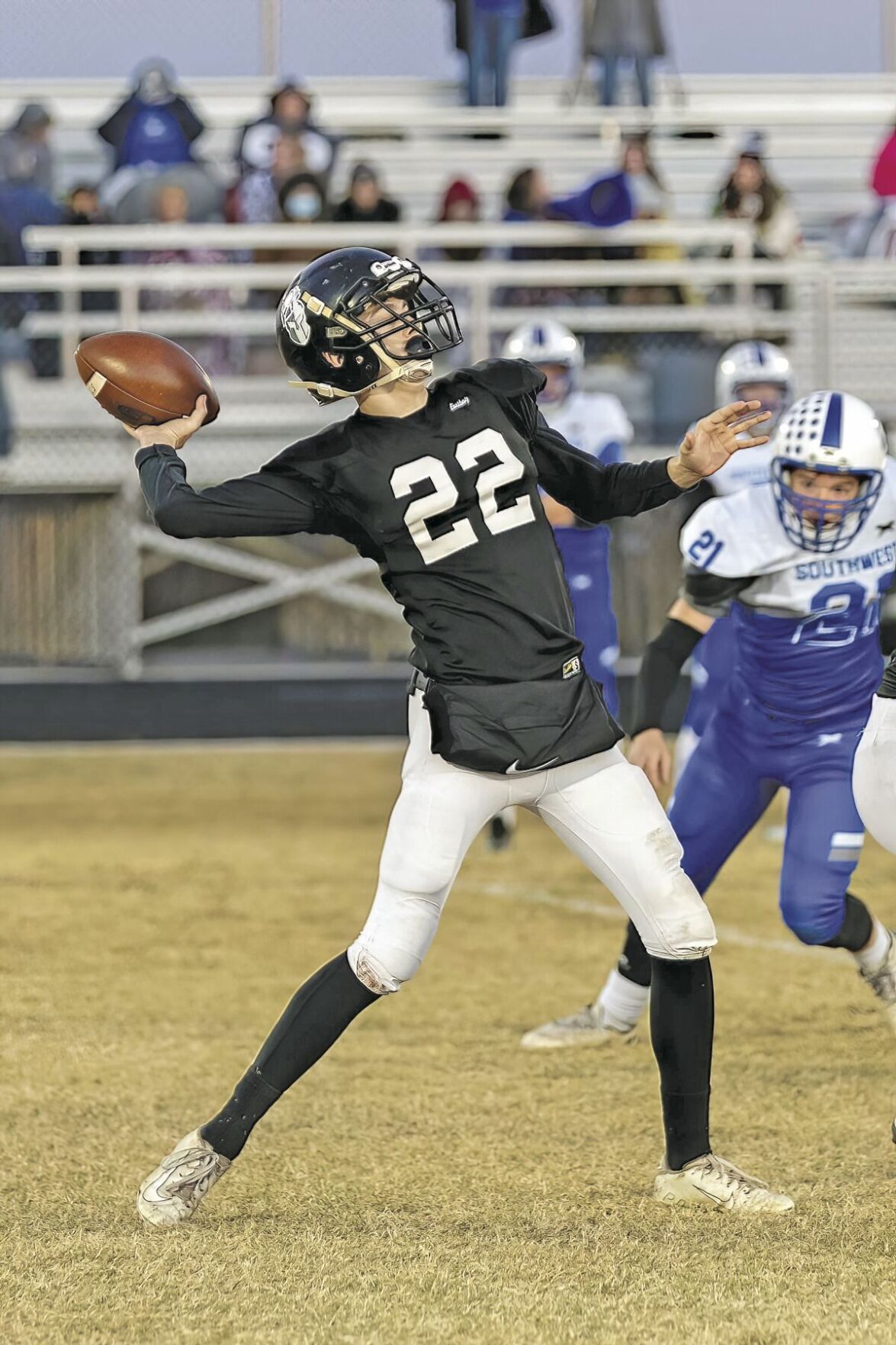 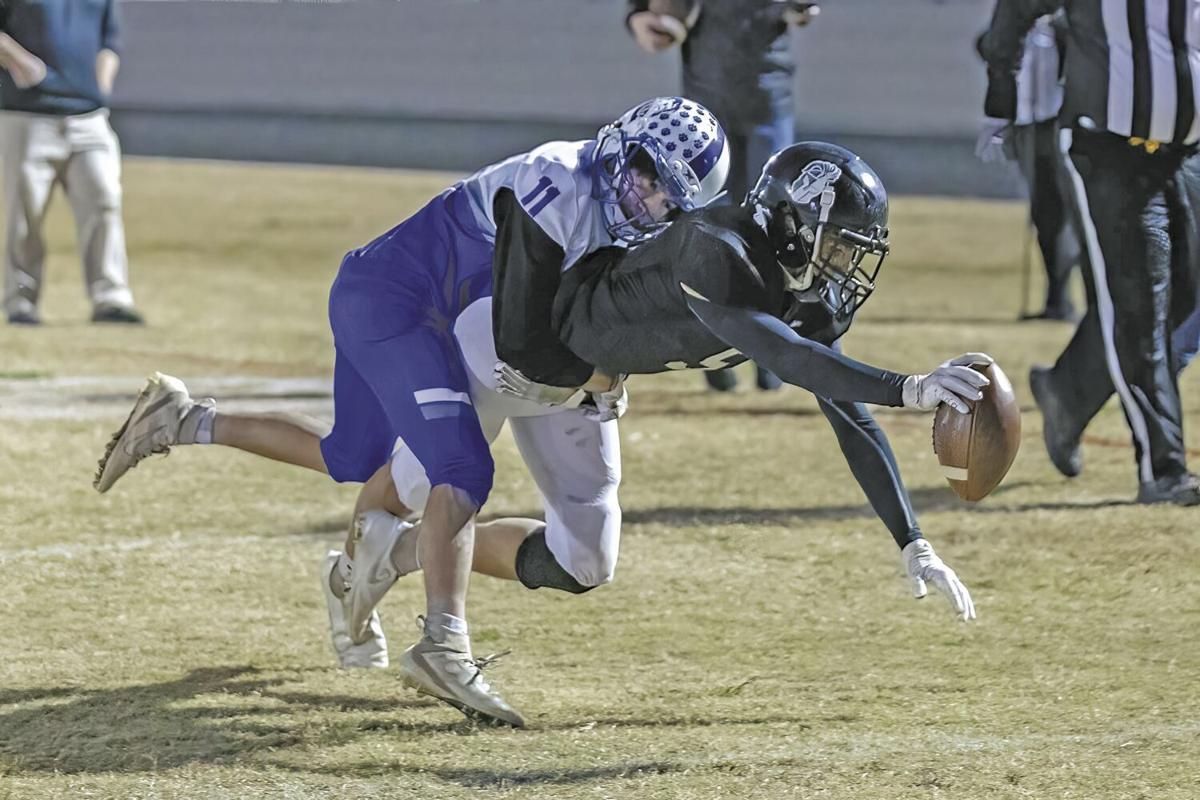 Claremore Christian senior Aiden Phillips (5) dives for the goal line while being wrapped up by Southwest Christian Academy’s Joshua Guerra (11). Phillips caught eight passes for 140 yards and a touchdown while also covering 14 yards on one rush attempt. View the full game gallery online at claremoreprogress.com.

Claremore Christian senior Aiden Phillips (5) dives for the goal line while being wrapped up by Southwest Christian Academy’s Joshua Guerra (11). Phillips caught eight passes for 140 yards and a touchdown while also covering 14 yards on one rush attempt. View the full game gallery online at claremoreprogress.com.

SHAWNEE – Regardless of whether Tyler Stephens ran left, ran right, threw short or threw long, Southwest Christian Academy was powerless to stop him.

The junior quarterback accounted for 299 yards and seven touchdowns against the outmatched Arkansas foe, leading Claremore Christian to a 58-8 victory in the Heartland Christian Athletic Association Class 2A championship Friday night at North Rock Creek High School in Shawnee.

Stephens threw for 196 yards and three touchdowns on 12-of-24 passing, rushed for 103 yards and four scores on eight carries and completed two 2-point conversion passes. His top target was Aiden Phillips, who caught eight passes for 140 yards and a touchdown.

“At the beginning of the year, actually, we did not think we were going to be this good,” said Stephens, who completed 65.4% of his passes this season for 1,238 yards and 21 touchdowns to only five interceptions. “All that postseason work, it paid off. It’s kind of stressful, knowing I don’t have all that experience, but I feel like I haven’t done that badly. It’s been really fun. I felt really honored to be able to start at QB.”

The title is the Warriors’ second in four seasons, having won the 2A crown in 2018 over Wright Christian. The win concluded a season in which CCS posted a 7-1 record and averaged 54.5 points per game while holding opponents to 13.3 points.

All that success despite taking on a new head coach in Steve Robinett and losing half its starters from last year’s squad that finished runner-up in HCAA Class 3A.

Robinett echoed Stephen’s preseason doubts, but he deflected credit to his team for its overachievement.

“The boys did all the work,” Robinett said. “They’ve been in the gym hard all summer. They started in June and hadn’t stopped until this Thursday. They made it really easy for me. At the beginning of the year, we weren’t sure how things were going to turn out, but they put the work in and make us look good.”

Things turned out rather well Friday night, and it didn’t take the Warriors long to prove their superiority over SCA.

Stephens found the end zone through the air and on the ground in the first quarter, giving CCS a 16-0 lead after an 11-yard touchdown pass to Peyton Abbott and a 1-yard keeper following a Deaken Abbott interception. Deaken Abbott — who had 42 yards rushing on seven carries and two catches for 26 yards — and Ian Feary added 2-point conversions after those scores.

Peyton Abbott snagged an interception of his own in the fourth quarter, adding to an already impressive game that saw him complete 3 of 4 passes for 42 yards, grab two receptions for 40 yards and rush for 20 yards on two carries.

“Watching Deaken run is just a thing of beauty,” Robinett said. “The kid is faster than he looks, and it’s very deceitful as far as trying to tackle him and the angles you try to take. And he’s run all over the field on everybody; it’s just amazing. Peyton is, offensive wise, a utility player. Mentally, though, that kid probably knows the game better than most coaches. He watches and studies film more than anybody I know, especially out of the players. He’s a student of the game, and that’s beautiful. He’ll be coaching one day, for sure. Defensive wise, he’s my captain. He knows what’s going on, and he lines everybody up and makes sure they’re in the right spot.”

The rout was on from there, for the Warriors added 28 points to their advantage in the second quarter, taking a 44-0 lead into halftime.

Stephens rushed for scores of 69 and 1 yards in the frame and completed a pair of 6-yard touchdown passes to Phillips and Feary, who also tacked on a 2-point conversion. Robinett’s son, Zac, caught the team’s other successful 2-pointer of the quarter.

“Everybody has hopes, but we came in and put the pedal to the floor,” Robinett said of the lopsided margin. “We were disciplined, and we knew if we played our game, things would go our way.”

The Lions managed to stave off a running clock at the beginning of the second half when Tavaoissea Tucker intercepted a deflected Stephens pass and returned it 80 yards for a touchdown, but it only delayed the inevitable.

Stephens responded with his seventh and final touchdown the following drive, scoring from 3 yards out to make it 50-8 with 6:18 remaining in the third.

“Tyler did a fantastic job both on the ground and through the air,” Robinett said. “We were off a little tonight, especially at the beginning with the pass, and the wind didn’t help that. But he picked up the ball and kept it when he needed to and ran hard. That (69-yard) run was beautiful; right down the sideline. He played his heart out and stepped up, and we’re excited he’s coming back for us next year.”

Feary finished with 46 yards rushing on 10 carries while catching two passes for 19 yards.

The defense was just as dominant as the offense’s 463-yard performance, forcing three turnovers – two interceptions and one fumble – and holding SCA to a 1-of-8 fourth-down conversion rate.

The Lions didn’t come close to scoring an offensive touchdown until late in the fourth quarter, but that drive ended with a Peyton Abbott interception.

“We work a lot on fundamentals, form tackling and ankle pursuit, especially in the early weeks,” said Robinett, whose team surrendered 111.3 yards per game. “I think a lot of that pays off, but we just had the right people in the right places so they can all work together. My leading tackler (Feary) had 48 tackles on the year for eight games, and that’s unheard of. That’s how little my defense is on the field. Other than the Barnsdall game, we had pretty good stoppages on fourth downs, percentage wise. I think in all but two games, we held opponents under 100 yards total offense.”