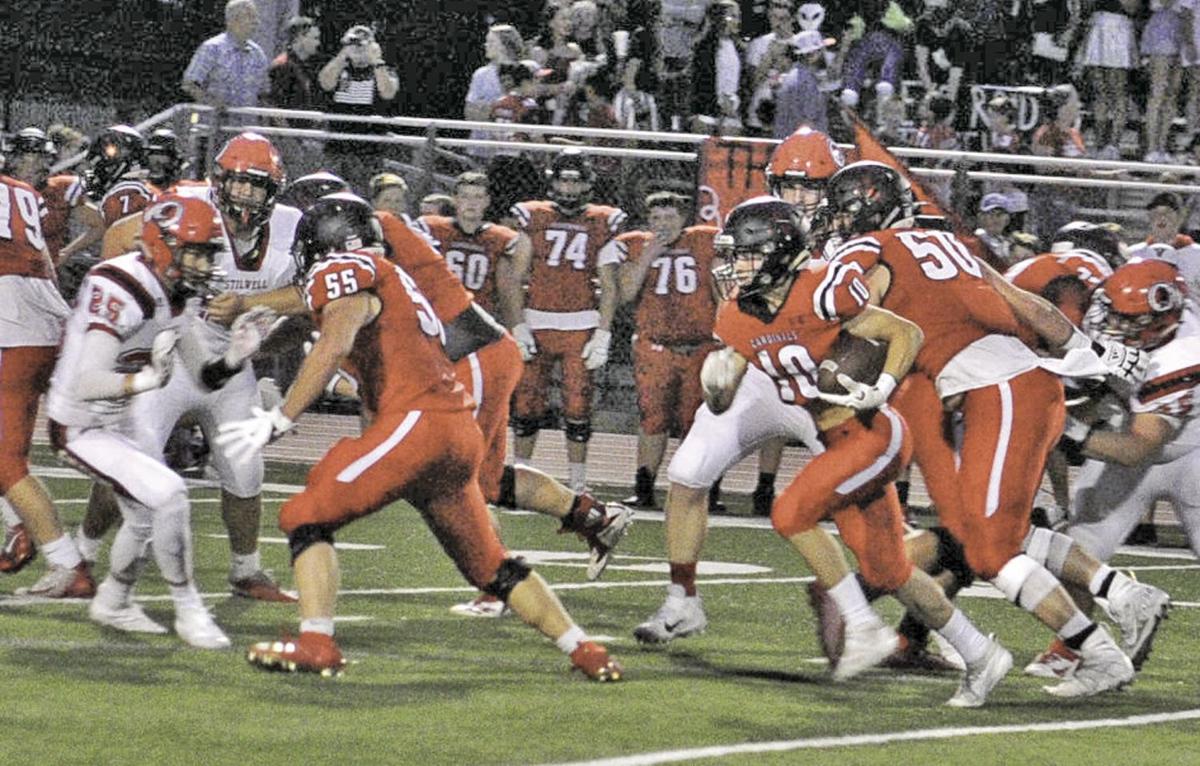 Verdigris senior Kyle Pickens (55) provides a block for running back Caden Parnell (10) during the Cardinals’ 50-23 homecoming win over Stilwell on Sept. 20. Pickens has played a key role in Verdigris’ run to the District 3A-4 championship, the program’s first since 2001 (District A-5). 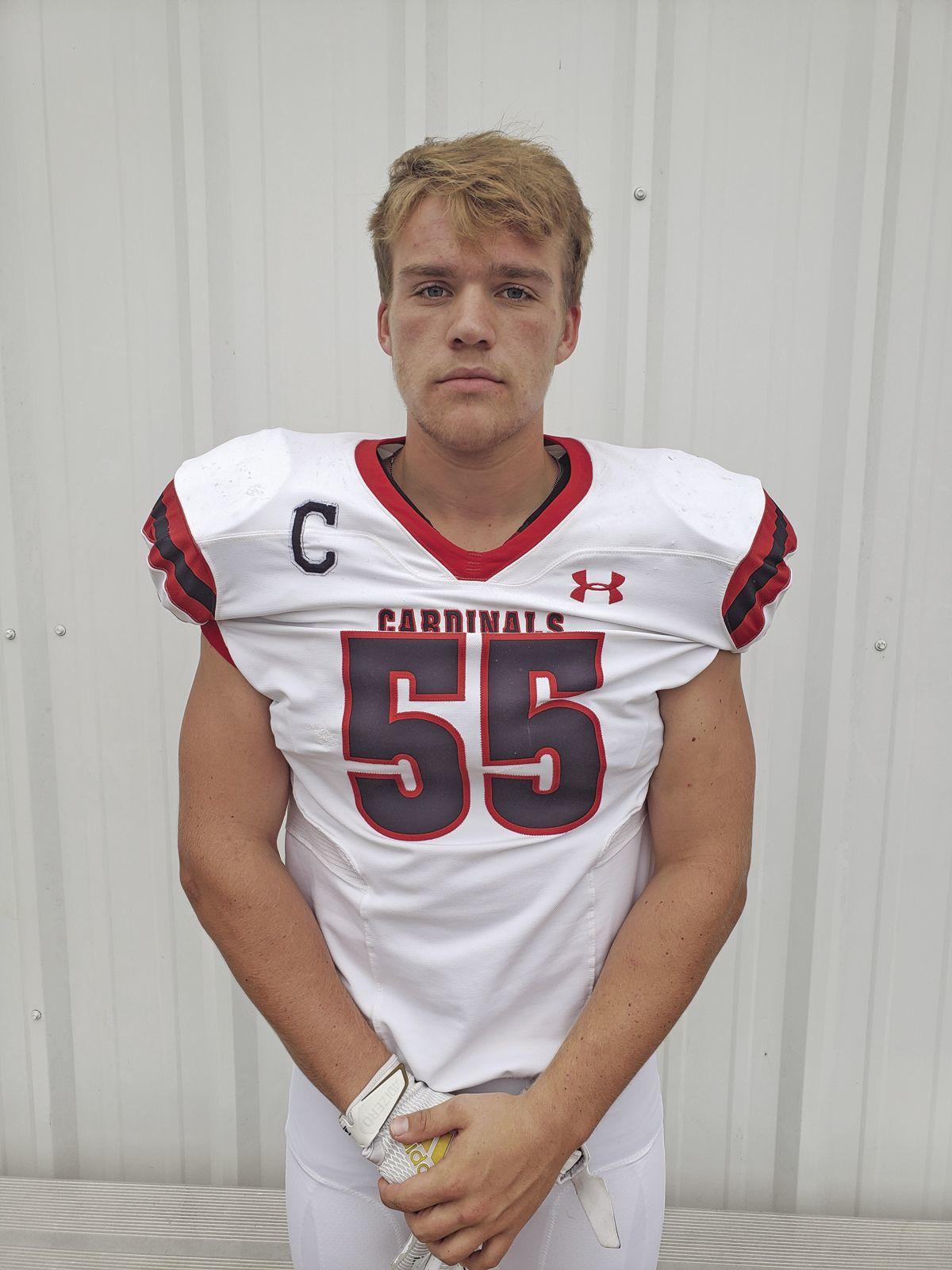 Verdigris senior Kyle Pickens (55) provides a block for running back Caden Parnell (10) during the Cardinals’ 50-23 homecoming win over Stilwell on Sept. 20. Pickens has played a key role in Verdigris’ run to the District 3A-4 championship, the program’s first since 2001 (District A-5).

VERDIGRIS — Kyle Pickens isn’t afraid to admit he was intimidated.

Despite boasting a 5-foot-11, 250-pound frame, Pickens was a mere freshman.

To him, size didn’t matter. Surrounded by young men with mountains of confidence and the experience to back it up, the Verdigris newcomer felt a little out of place.

He was concerned his inexperience on a varsity offensive line would put him at a disadvantage and make him vulnerable against veteran opponents.

Pickens had the will, but being so young, he wasn’t certain he had the tools to do the job.

However, enduring those obstacles has transformed Pickens from a wide-eyed youngster to a feared intimidator.

“It made me the player I am today,” Pickens said.

Now a senior, Pickens plays a key role on both the offensive and defensive lines for the seventh-ranked Cardinals, who claimed their first district title since 2001 with a 35-21 upset of then-No. 4 Berryhill on Nov. 8.

Verdigris hosts Idabel at 7 p.m. on Friday in the first round of the Class 3A playoffs. Coach Travis East’s team will be looking for its first postseason win since 2012.

Led by Pickens and a talented offensive line, Verdigris has proven to be one of the most potent offenses in the state, averaging 45.9 points and 422.1 yards per game.

Pickens credits the great success to the camaraderie among the linemen.

“This year, the offensive line is a lot closer,” Pickens said. “We’ve always been good friends, but this year, we’re all brothers. We’re not afraid to get on to each other and get after each other if we mess up. We all have the same common goal in the end, and that is to blow up the guy in front of you.

“We work together like that and make it happen.”

Coincidentally, the two players Pickens is tasked with protecting the most are experiencing exactly what he went through at the beginning of his high school career.

The team’s leading rusher and passer, Caden Parnell and Dylan White, are both freshmen.

Parnell has rushed for 679 yards and 10 touchdowns through eight games of action, averaging 7.1 yards per carry in the process.

White took over as gunslinger for an injured Hayden Jones halfway through the season, but he has already thrown for 1,006 yards and nine touchdowns, completing 61.9 percent of his passes.

Like Pickens, this dynamic duo overcame the age and experience barrier to produce exceptional results that ultimately lead to wins.

“Whenever you’re a freshman going into football, it’s kind of like, ‘Oh, there are the scary seniors,’” Pickens said. “Well, this group of seniors is probably the opposite of that. Whenever these freshmen came in, we were all just a big group of friends playing football.

Defensively, Pickens has tallied 19 solo tackles while assisting on 22 others. He also has three fumble recoveries to his name, forcing two.

Of course, he had to put in work off the field as well.

Although having a large stature is good for a lineman, Pickens felt he could do more if he were a little lighter on his feet.

So by the time his sophomore season came about, he had dropped 20 pounds.

He dropped weight again his junior year, and he now sits at about 195 pounds as a senior.

Pickens said the change has made him a lot more explosive.

“I’m all over the field on offense and defense,” Pickens said. “I used to be fast for a lineman, but all that extra weight held me down. Now that I shed all that off, I can really be explosive and help make plays on the field.”

His lone setback came during his sophomore year in a preseason scrimmage against Salina and Vinita.

An untimely hit tore several ligaments in his right elbow, causing him to miss four weeks.

“I bounced back pretty well from that, I’d say,” Pickens said. “After the doctor said I tore all these ligaments and fractured it, I was thinking it was going to last a lot longer than it did.”

The recovery period might’ve been shorter than he expected, but the injury limited him in more areas than just the gridiron.

Pickens is a devoted weightlifter, and an injured arm meant pumping iron was a futile endeavor.

“I always wanted to be the strongest guy out there,” Pickens said. “The hardest part about it was knowing I had to cut back on weights and not jump back into it too fast because I’d just hurt myself even more. I had to be humble with it and grind back up.”

Pickens has been healthy ever since, though, and he is more motivated than ever to help Verdigris make a run through the playoffs.

Verdigris (8-2) is a darkhorse in this year’s Class 3A bracket, but with home-field advantage guaranteed through the quarterfinals, anything is possible.

“It’s a great feeling being able to bring one more game back home to the community,” Pickens said. “Everybody’s hyped up and ready for it, and I guarantee the whole town of Verdigris will be there Friday night. It’s going to be a crazy game.”

Regardless, the Cardinals are one of the hottest teams in the class entering the postseason and will be a tough out for any opponent standing against them.

Can someone knock Verdigris off its high, or will it continue its run all the way to UCO’s Wantland Stadium for the state championship game set for 11 a.m. on Saturday, Dec. 7?