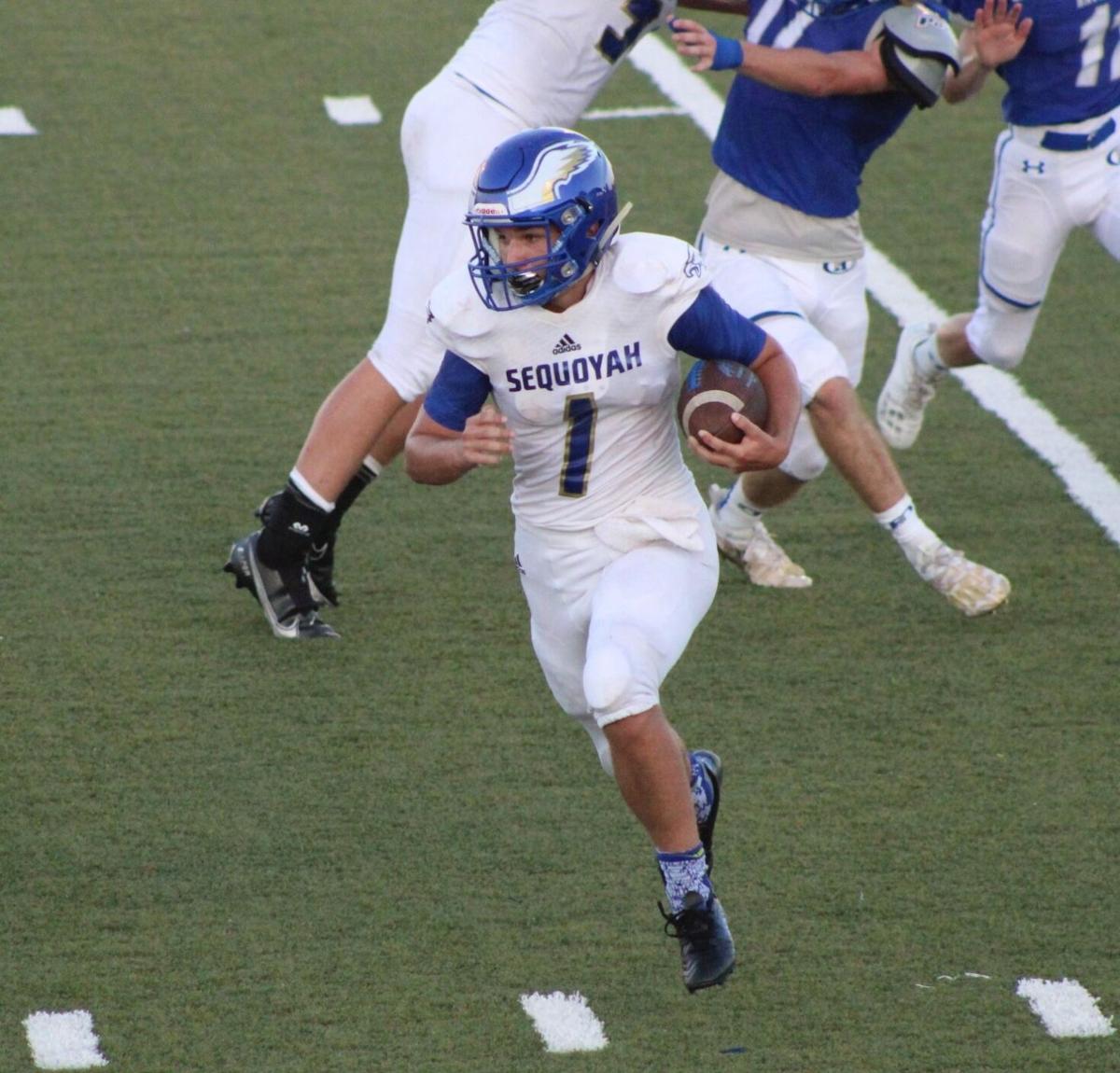 Sequoyah Blake Bedsworth (1) sprints downfield during the Eagles Week 1 contest at Haskell. Bedsworth, a senior, rushed for 125 yards and two touchdowns on 14 carries. 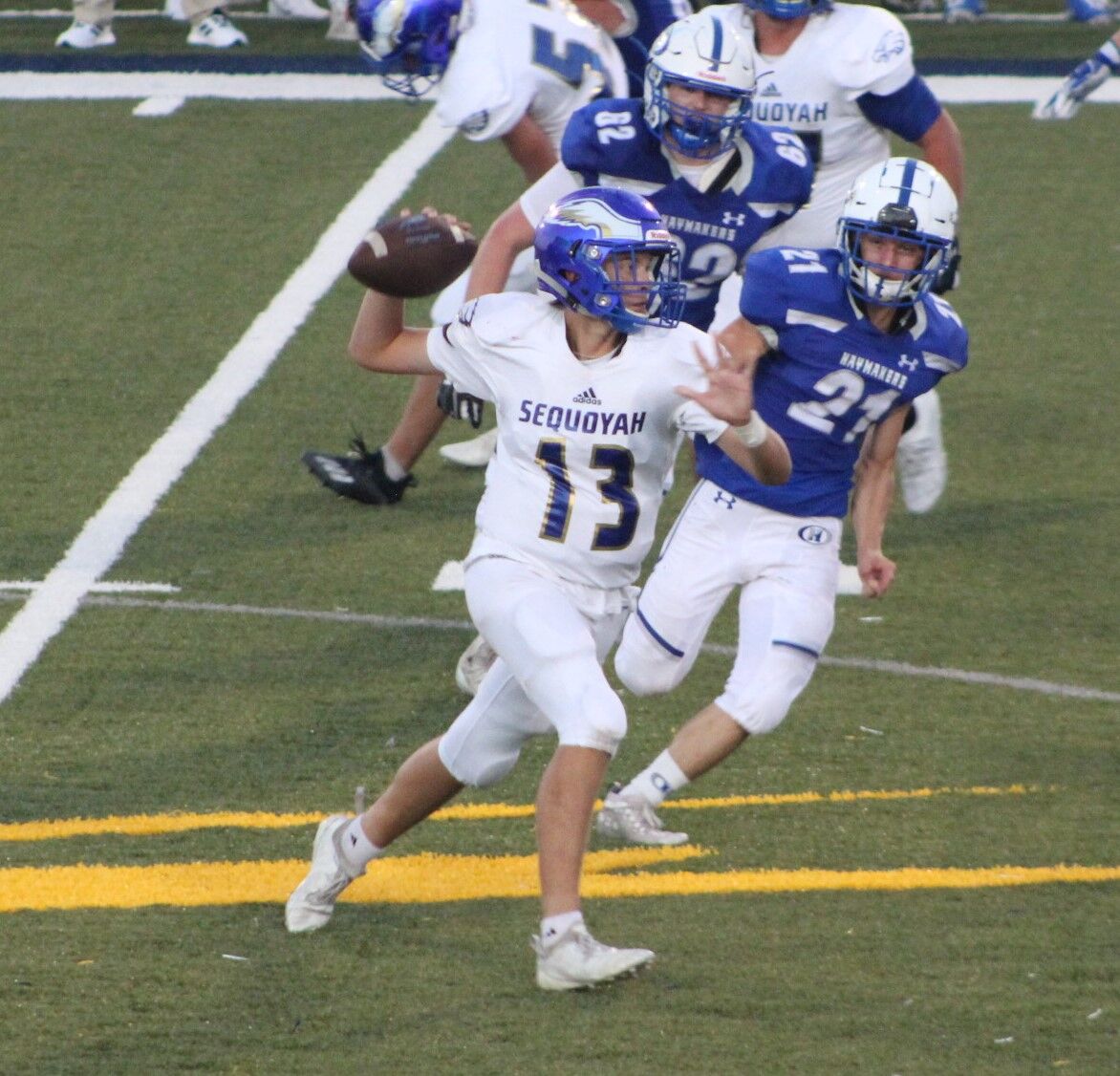 Sequoyah quarterback Brett Burks (13) throws a pass while under pressure from the Haskell defense Thursday night.

Sequoyah Blake Bedsworth (1) sprints downfield during the Eagles Week 1 contest at Haskell. Bedsworth, a senior, rushed for 125 yards and two touchdowns on 14 carries.

Sequoyah quarterback Brett Burks (13) throws a pass while under pressure from the Haskell defense Thursday night.

As the senior raced down the east sideline, he plowed through a Haskell defender with a powerful right arm en route to a 63-yard touchdown run in the opening minute of the third quarter.

That was Burks’ lone carry of the game, but it was enough. It contributed to something he and 10 other seniors have sought for nearly three years. A win.

Sequoyah ended its 22-game losing streak in emphatic fashion Thursday night, dominating the Haymakers 38-0 at A.B. Shockley Stadium. It was the Eagles’ first win since defeating Daniel Webster 27-20 on Nov. 3, 2017, in the regular-season finale.

The Eagles (1-1) were unstoppable running the ball, racking up 430 yards rushing behind running back Logan Hattaway and quarterback Blake Bedsworth, who both eclipsed the century mark.

Hattaway, a sophomore, broke runs of 40 and 36 yards on the way to 138 yards and a touchdown on 11 carries – a whopping 12.5 yards per touch. His 7-yard scoring burst with 8:48 remaining in the third quarter increased the Sequoyah lead to 31-0.

Meanwhile, Bedsworth scored on runs of 16 and 40 yards, with the latter putting an exclamation point on a 125-yard performance in which he averaged 8.9 yards per carry.

“That’s a good balance,” Sequoyah coach Rob Gilbreath said of his team’s rushing attack. “We knew Blake could run the ball well, and we kind of instilled that this week to take advantage of his strengths, and it paid off for us.”

Although a senior, Bedsworth didn’t experience any of the grieving from the 22-game losing streak. Following his freshman year in 2017, he left football to focus on his baseball career. He wasn’t oblivious to his former teammates’ struggles, though.

After Sequoyah logged a second-consecutive 0-10 season, he felt prompted to make his triumphant return to the gridiron.

“The team really needed a turnaround, and I thought I’d come back and help lead it,” Bedsworth said. “They needed a little bit more leadership, and I thought I could provide that. It’s amazing for me (to get this win), but I bet it’s way more sweet for them. They went through all the struggles, and they got criticized and all that.”

Bedsworth also completed 2 of 3 passes for 14 yards, bringing the Eagles yardage total to 444 yards. Braxton Bulman, who hit a 31-yard field goal with only 39 seconds expired in the second quarter to give Sequoyah an 11-0 advantage, caught both passes.

Josh Harwell found the end zone as well on an 8-yard run that made it 18-0 with 2:10 remaining until halftime.

As potent as the Eagles’ offense was Thursday night, the defense was just as dominant.

Sequoyah limited Haskell to 99 yards of offense, recording nine tackles for loss while also holding it to 1 or zero yards on eight other occasions.

The Haymakers’ biggest plays were a pair of 14-yard completions by Brannon Westmoreland and a 14-yard run from Lucas Roberson. Westmoreland threw for 45 yards on 10-of-17 passing while Roberson paced Haskell in the rushing game with 30 yards on six carries.

The Haymakers (0-1) committed two turnovers as well, both of which were fumbles.

The win marked the first shutout for the Eagles since besting Dewey 50-0 in District 3A-5 action in 2017.

“It was important (to get the shutout) because our defense, that’s what we’re known for,” Burks said. “Our linebackers, we all played well. The secondary played well, and the linemen played well. It was a group effort; it wasn’t one guy. I didn’t beat the other team. Everybody all played together.”

Gilbreath, who is now 1-21 as the Sequoyah coach, echoed those sentiments.

“The defense played lights out,” he said.