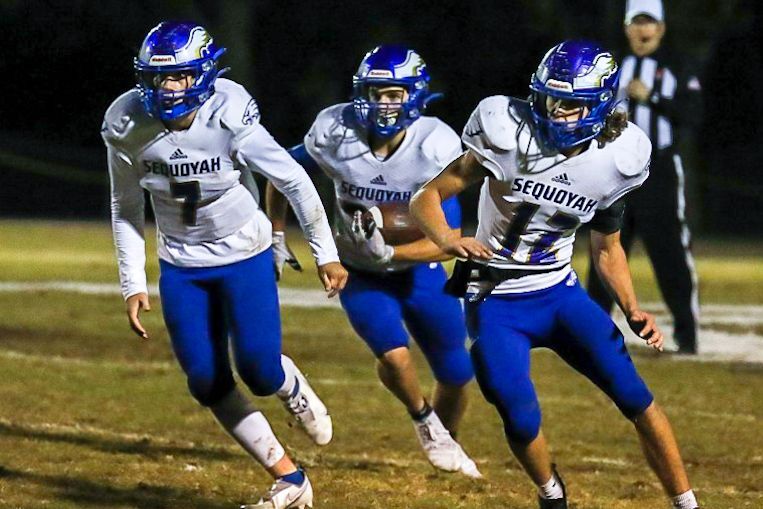 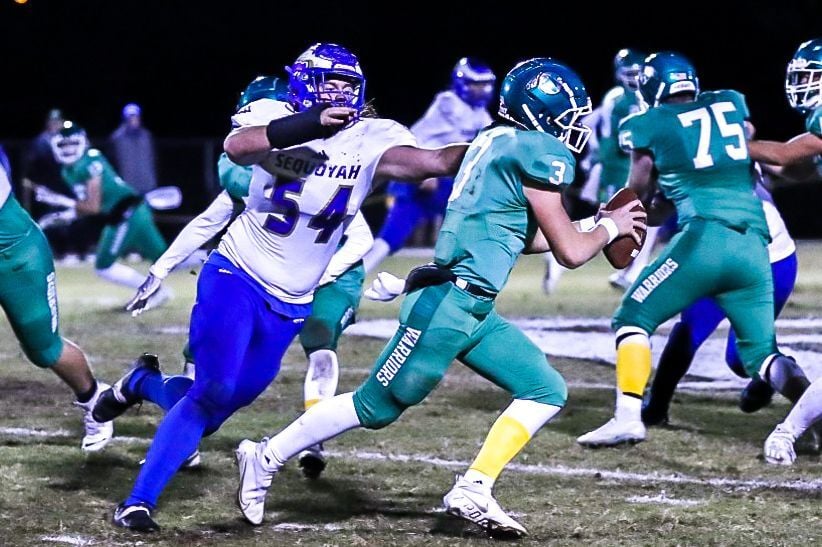 Most teams, including the Eagles, choose to defer so they can get the ball to start the second half, but the veteran coach wanted to prove a point.

“We thought we were a little more physical than them (Adair), and we wanted to prove it right off the bat and kind of make a statement,” Gilbreath said. “And that’s what we did.”

The explanation didn’t end there, though.

“And there was no wind. And we knew they didn’t have a very good kicker, so we were going to get good field possession anyway. There were a lot of things that played into that, but those were the three major factors right there.”

Luckily for Sequoyah, it didn’t take long for that decision to pay off.

Junior running back Logan Hattaway dashed 58 yards for a touchdown on the second play of the game and tacked on a 2-point conversion moments later, giving the Eagles an eight-point lead with only 48 seconds expired.

That was only the beginning for Hattaway, who went on to finish with 252 yards rushing and three touchdowns on 22 carries – 11.5 ypc – while leading the Eagles to a 28-14 victory in District 2A-8 action Friday night at Gene Winfield Stadium. In addition to the 58-yarder, he scored from 24 and 50 yards out.

Sequoyah (7-3 overall, 4-2 2A-8) overtook the Warriors for third in the standings with the win and will play Beggs in the first round of the playoffs. It will be its first postseason appearance since 2017.

The Eagles qualified for the postseason last season but were forced to forfeit their first-round game against Morris because of COVID-19 issues. Hattaway and his teammates will officially experience their first playoff atmosphere next week.

“In the locker room, coach was telling us our standings and where we’d be at, but he told us to play every play like it’s your last,” he added. “He said give it everything you got, and that’s what we came out and did. We gave it everything we had and came out with the win.”

Sequoyah didn’t score again until the first play of the second quarter when Landon Gilbreath found Josh Harwell for a 69-yard touchdown strike, increasing the lead to 15-0 with 11:48 remaining until halftime. That was the only completion of the night for the freshman quarterback, who went 1-of-5 with an interception while also rushing for 18 yards on five carries.

The Eagles lost two fumbles as well, bringing their turnover total to three.

Hattaway found himself in the end zone once more two possessions later, scoring on a 24-yard run to make it a 21-0 spread at the 4:55 mark of the second quarter, and that is where things stood at the half. His 125 yards on 12 carries helped the Eagles outgain Adair 218-131 in the first half.

Hattaway also saw significant time on defense, which made his performance that much more impressive.

“Logan had to step up and play a lot of defense tonight,” Rob Gilbreath said. “He was doing that (averaging over 11 yards per carry) while playing both sides of the ball.”

Despite losing starting defensive back Karson Bickel to an injury in the second half, Sequoyah could’ve notched a shutout of the Warriors if not for a pair of fourth-down touchdown passes via the arm of Nate Ratcliff.

Ratcliff’s first scoring toss came when he threw a deep ball on a fourth-and-22 play from the Sequoyah 27 at the 6:37 mark of the third. An Eagle defender slightly misjudged the depth of the pass, allowing Reece Jackson sneak behind him and make the catch in the end zone.

Ratcliff, who completed 21 of 32 passes for 176 yards, struck again with 32 seconds remaining in the fourth, finding a wide-open Jackson Calvert in the back of the end zone for a 9-yard touchdown.

Jackson finished with nine receptions for 57 yards while Calvert had 33 yards on four catches.

Hattaway’s 50-yard touchdown run came only 44 seconds after the first score, ballooning the advantage to 28-6 while dashing any hopes the Warriors had of sparking a comeback.

“They fought hard, and they really had to earn that first one they got,” said Rob Gilbreath, whose team allowed 4 of 7 fourth-down conversion. “But we are banged up. When Bickel went out at safety, we had to switch some people around and put another corner in there, and that put the corner at safety. That’s part of two-way football; you just gotta go with what you got.”

Aside from their fourth-down defense, the Eagles were fairly stout.

Come next week at top-five opponent Beggs (8-2), the Eagles will be looking for their first playoff win since 2016, which coincidentally came in a 49-48 decision over the Golden Demons.

“When you get to the playoffs, you gotta beat them all anyway,” Rob Gilbreath said of the unlucky draw. “Like we did tonight, we really needed to go into the playoffs with some momentum, and I think that will make our kids fight a little hard next week at practice and give them some anticipation of the playoffs. These kids have never been to the playoffs.”