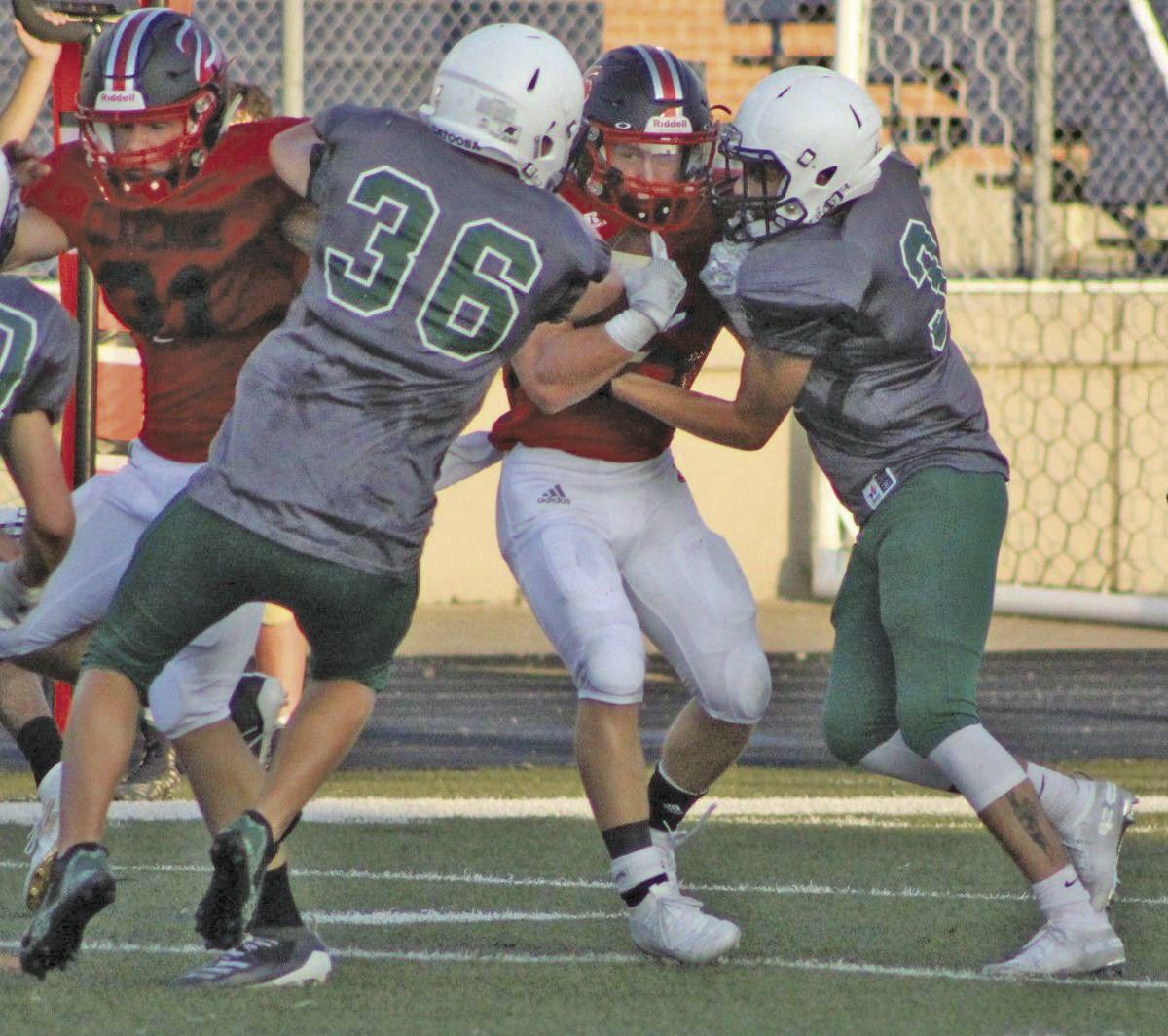 Catoosa linebacker Gavin Ragsdale (36) and a teammate bottle up Claremore running back Jace Hightower during the Rogers County Rumble scrimmage Aug. 24 in Oologah.

Catoosa linebacker Gavin Ragsdale (36) and a teammate bottle up Claremore running back Jace Hightower during the Rogers County Rumble scrimmage Aug. 24 in Oologah.

Editor’s note: The COVID-19 coronavirus pandemic’s effect on the 2020 high school football season is unclear. This story is part of a series that serves as an offseason assessment of all nine Rogers County teams.

CATOOSA — Adjusting to life under a new coach rarely produces a flawless transition.

Catoosa faced a steep learning curve when Jason Medrano, formerly the Muskogee offensive coordinator, took over the football program last spring. Implementing a new offense and defense is difficult and time consuming, and those struggles manifested in a rough 3-7 2019 campaign.

However, that experience will prove paramount as the Indians enter the early preseason period.

They are now comfortable in Medrano’s system and are ready to make improvements on last year’s kinks.

“Last year, some of the kids had to learn something completely new on both sides of the ball,” Medrano said. “The requirements that I brought to the program — as far as hours of practice, hours in the weight room and film study — I think the kids have adjusted and are adapting well to it. The kids have had a year to get acclimated to me and my philosophies for our program.”

Catoosa runs a “wide-open” spread offensive scheme that allows for more creativity in the passing game with the utilization of four or five receivers and a tight end on occasion.

It will be looking to upgrade its offensive prowess after managing only 15.8 points per game last season.

“We’re going to give defenses many different looks, and we’re going to try to force them into base alignments,” Medrano said.

Defensively, the Indians use a 3-5-3 stack alignment that is designed to confuse offensives with a variety of blitzes and stunts. It will allow them to keep linemen fresh with multiple rotations while taking advantage of their talent at the skill positions.

Key Question: Can Catoosa thrive with a larger roster?

By the end of last season, Medrano was dealing with a limited squad of only 28 players, which is absurdly low for a Class 4A school with an average daily membership (ADM) of 546.19.

The offseason has been kind to Catoosa, though, for the roster has grown to 68 players during the summer.

Medrano hopes the larger pool of players helps lead the Indians to a great turnaround season. They return 10 starters, including seven on defense, as well as a slew of other experienced athletes.

“We’ve had a good turnout this summer; kids are showing up,” Medrano said. “We’ve got kids coming out from other sports who didn’t play last year, so hopefully some of those kids can make an impact for us.”

Busch, an incoming senior, was thrust into the quarterback spotlight last season after the departure of two-year starter Daniel Queen.

He hadn’t started at the position since eighth grade, and his rust was evident on the stat sheet. Although he completed nearly 50 percent of his passes for 1,409 yards and eight touchdowns, he also threw 18 interceptions.

The key for him in 2020 is limiting turnovers, which Medrano said should be an accomplishable task for Busch heading into his second year in the spread offense.

“In my system, the quarterback has to be able to throw the football,” Medrano said. “He throws a beautiful ball, but it took us a year to teach him how to read defenses. Now he’s better at it, he’s had a year of studying it and if he’s not on the field throwing, he’s in the film room with me studying.

“How he handles and manages the game this year is going to determine how we go.”

Ragsdale played several positions defensively for the Indians in 2019, but his primary focus was linebacker.

The incoming senior led the team in tackles with 106.

“Those two right there are equally important to us as a football team.”

Key Game: Sept. 11 vs. Fort Gibson. Between a pair of matchups against Class 5A foes in nondistrict play, Catoosa takes on the Tigers for the first time since 2013.

Although the Indians lead the all-time series 3-1, Fort Gibson has become a playoff regular in recent years with three-consecutive appearances from 2017 to 2019.

Medrano said his team’s performance in this game will be indicative of its playoff potential.

“Fort Gibson graduated a bunch of guys last year, but usually in District 4A-4 they’re pretty tough,” Medrano said. “They make the playoffs quite a bit, so I think for us it’s going to be that Fort Gibson game that tells us where we’re going.”