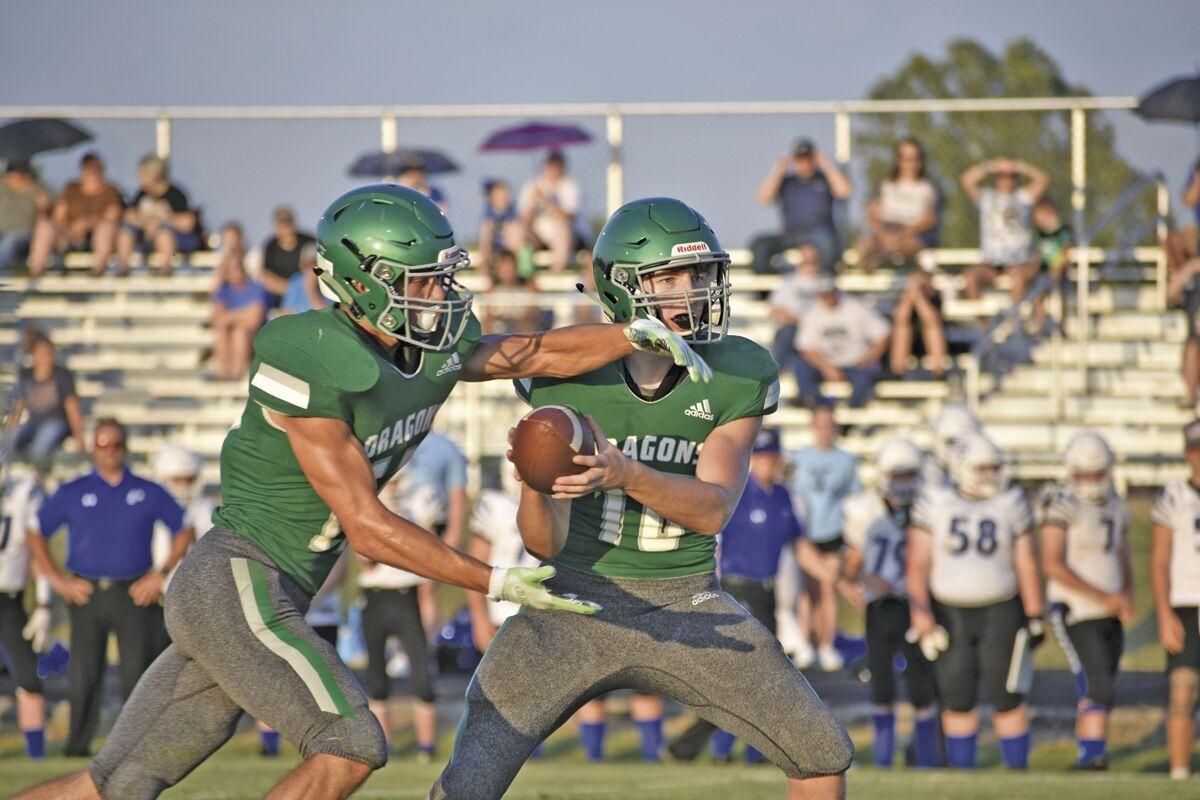 Chelsea quarterback Chase Smith, right, hands off to running back Cash Ramsey during the Green Dragons’ season opener against Porter on Friday, Aug. 27. 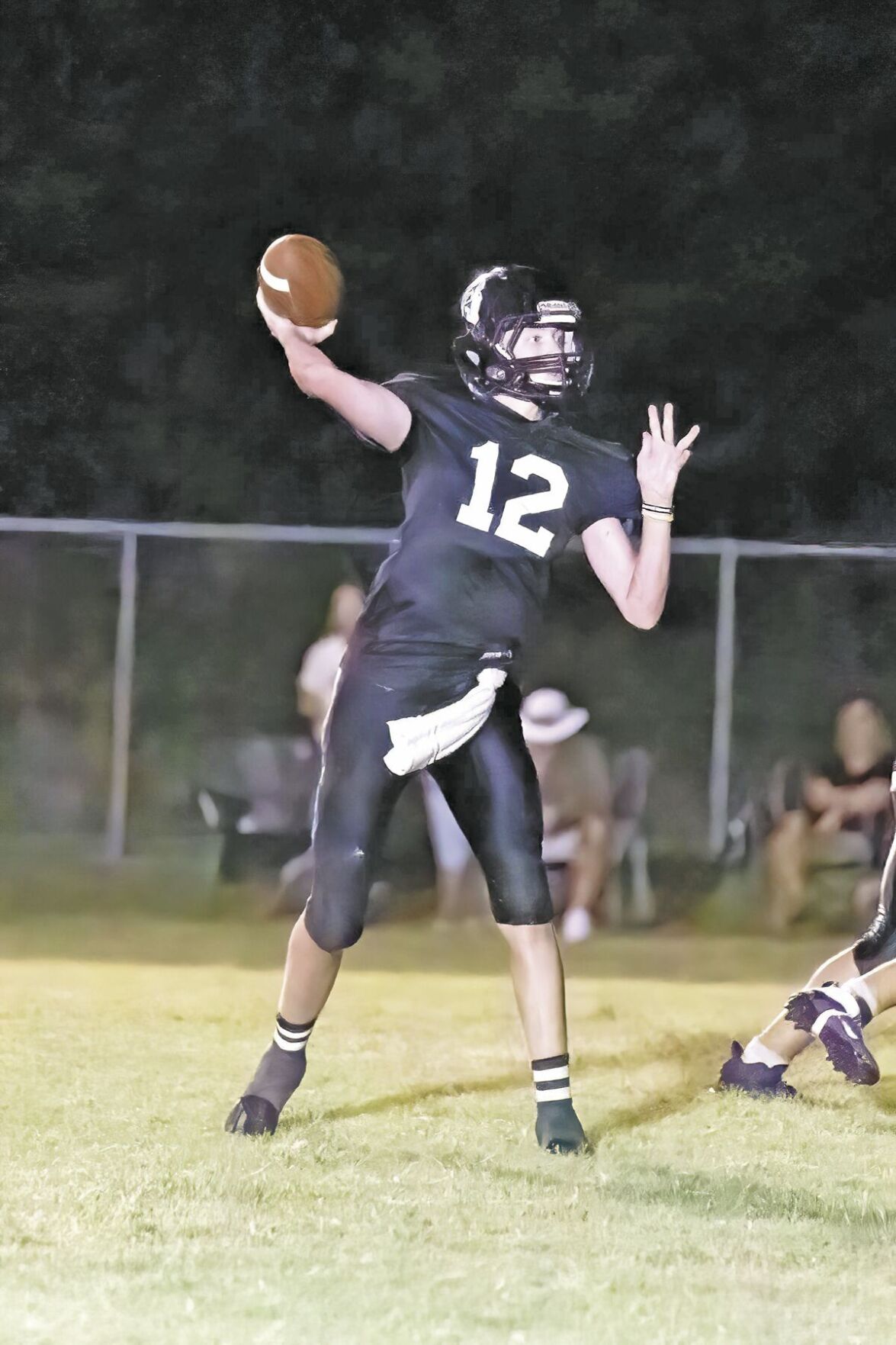 Claremore Christian quarterback Tyler Stephens looks to make a pass during the Warriors’ season opener against Foyil on Friday, Aug. 27.

Chelsea quarterback Chase Smith, right, hands off to running back Cash Ramsey during the Green Dragons’ season opener against Porter on Friday, Aug. 27.

Claremore Christian quarterback Tyler Stephens looks to make a pass during the Warriors’ season opener against Foyil on Friday, Aug. 27.

You’ve seen how Claremore, Verdigris and Sequoyah fared in their Week 1 matchups, now let’s take a look at some of the other teams in the Progress area.

Claremore Christian, Chelsea and Collinsville struggled little in blowout victories, while Inola, Pryor and Owasso were locked in four-quarter games.

Claremore Christian 72, Cornerstone, Mo. 24: It was a massacre from start to finish as the Warriors had a field day against Cornerstone during their “field trip” to Joplin, Mo.

Led by quarterbacks Tyler Stephens and Peyton Abbott, CCS accumulated 553 total yards while scoring no less than twice per quarter.

Stephens and Abbott combined for 327 yards and eight touchdowns on 24-of-29 passing. The former led the way, completing 13 of 15 passes for 167 yards and four touchdowns, and the latter added 160 yards and four scores on 11-of-14 passing.

The Warriors (2-0) also got it done on the ground, racking up 226 yards. Ian Feary paced CCS with 171 yards and a touchdown on only six carries — a whopping 28.5 yards per carry. His longest run went 63 yards.

Deaken Abbott rushed for a score as well, managing 66 yards on eight carries with a long of 47 yards.

Smith recovered from that early adversity quickly, scoring three rushing touchdowns on runs of 3, 23 and 15 yards before capping an incredible first quarter with a pick-six of his own from 35 yards out.

That explosion, alongside touchdown runs of 51 and 14 yards from running back Cash Ramsey, gave the Green Dragons an insurmountable 42-6 lead heading into the second frame.

Smith went on to complete 8 of 11 passes for 120 yards while rushing for 46 yards on nine carries. Carson Lawhorn was the primary target, catching five balls for 90 yards.

Ramsey scored once more in the third quarter, this time from 3 yards out, to give him 157 yards rushing on 16 carries (9.8 ypc).

Daniel Comiford scored Chelsea’s last touchdown on a 29-yard run in the fourth quarter, increasing the lead to 54-6 before Nowata managed a couple of touchdowns in garbage time. He had 54 yards on six carries and caught one pass for 13 yards.

In all, the Green Dragons outgained the Ironmen 427-161 behind 307 yards on the ground.

Inola 17, Gravette, Ark. 16: Make that two fantastic finishes to open the season for new coach Tommy Rogers and his Longhorns.

A week after a touchdown with 2:30 remaining gave it a 29-28 victory over Sequoyah, Inola used a 26-yard field goal from Jedd Barrett, who was the team’s leading tackler, punter and starting full back, with 40 seconds remaining to escape Arkansas with another one-point victory. Plays later, Seth Maner made a diving interception of the Lions’ quarterback to seal the win.

The Longhorns trailed 16-7 in the fourth quarter until Tucker Ford found Christian Jones for a 26-yard touchdown strike with 7:23 remaining.

Jace King scored Inola’s first touchdown on a 67-yard run, giving the Longhorns a 7-6 lead with 7:30 remaining in the first quarter.

Collinsville 54, Oologah 22: Andrew Carney wasted little time proving why he is one of the best quarterbacks in the state.

Both of Carney’s touchdown tosses went to Oscar Hammond, who also had a 13-yard scoring run, on throws of 71 and 12 yards. Brayden Gilkey and Blake Gilkey accounted for rushing touchdowns as well, helping the Cardinals build a 40-7 lead with 10:31 remaining in the third quarter.

In all, Collinsville outgained Oologah 584-349.

The Mustangs fell behind 27-0 before Nate Morrow scored on a 3-yard run with 1:43 until halftime.

Aidan Trimble was a star for Oologah, accumulating 163 yards rushing on 21 carries with touchdown runs of 29 and 37 yards. He led the Mustangs’ ground attack that tallied 274 yards and averaged 6.07 yards per carry.

Catoosa surrendered 49.3 points per game in 2020 but surprised on opening night of 2021 by holding a Pryor offense that put up 40.9 ppg last season to only 20 points. In fact, the Tigers managed only 201 yards on 63 plays, which was quite a drop from last year’s 397 yards against the Indians.

Owasso 48, Fayetteville, Ark. 42: Despite leading by as many as 19 points early in the fourth quarter, Owasso found itself reeling in the final minutes.

Emery Neeley gave the Rams a 48-29 lead after a touchdown run with 11:18 remaining, but Fayetteville rallied to within six by the 7:13 mark.

The Bulldogs nearly had a chance to take the lead with just over three minutes to play, but Owasso recovered a muffed punt and proceeded to run out the clock from there.

The Rams were held to only 88 yards rushing on 32 carries, but Austin Havens made up for that with his arm, throwing for 386 yards and three touchdowns on 20-of-34 passing.

Cole Adams caught two of those touchdown passes, but Ronnie Thomas Jr. and Hakelan Carney led the team in receiving with 166 and 123 yards, respectively. Thomas caught a TD pass as well.

Beggs 74, Rejoice Christian 48: That score is not a typo.

Beggs scored 44 points in the second half, managing to stave off Rejoice’s 26 second-half points after holding a 30-22 halftime lead.

Eagles quarterback Chance Wilson was electric as well, throwing for 363 yards and six touchdowns on 24-of-41 passing. He also rushed for 94 yards on 12 carries.

Lincoln Christian 31, Jones 29: There is no time disadvantage that can keep the Bulldogs from getting a win.

That gave the Bulldogs their fourth-consecutive victory over Jones.

Max Brown led Lincoln Christian to 406 yards of offense, throwing for 200 yards on 17-of-27 passing while also rushing for 187 yards and two touchdowns.