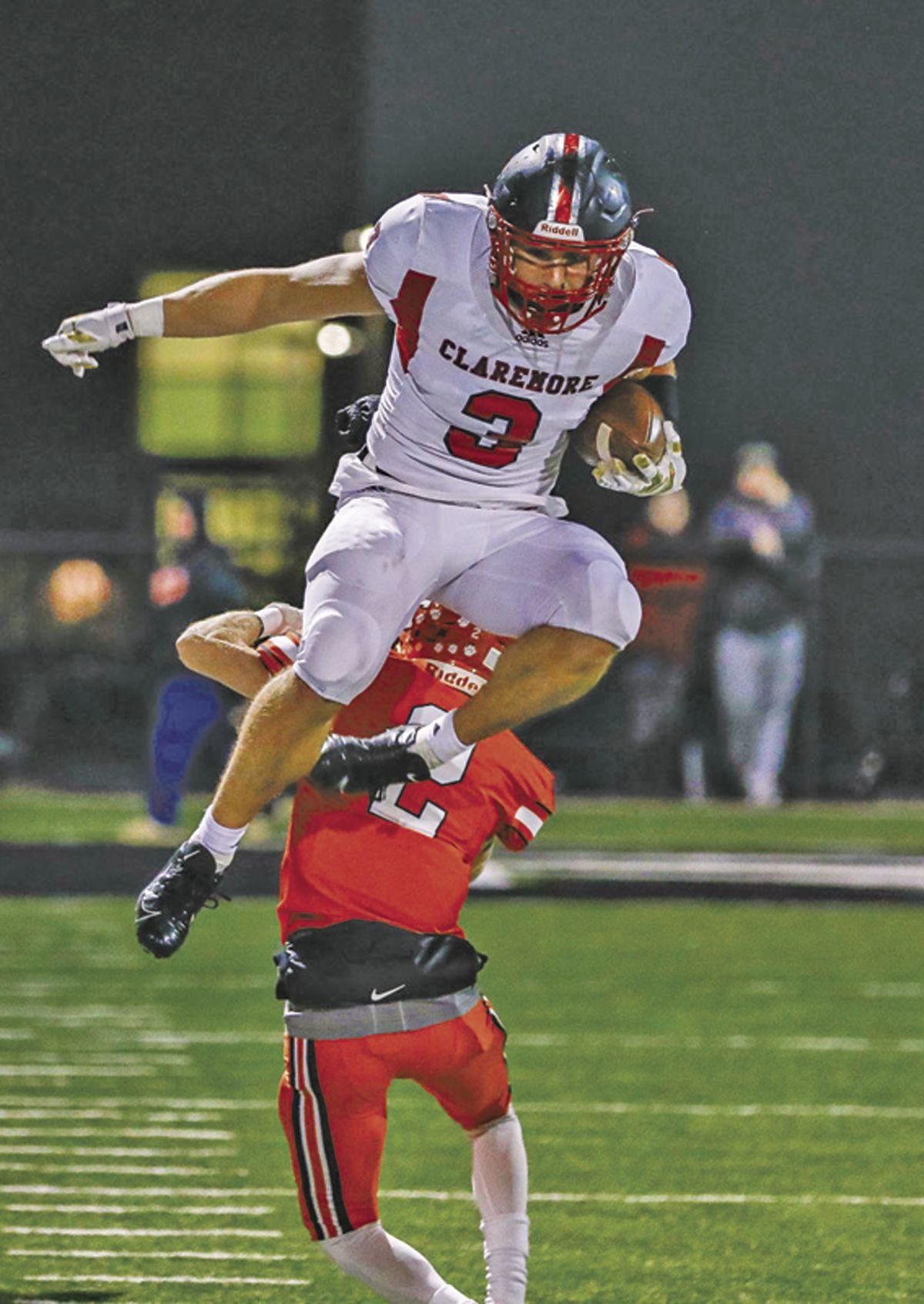 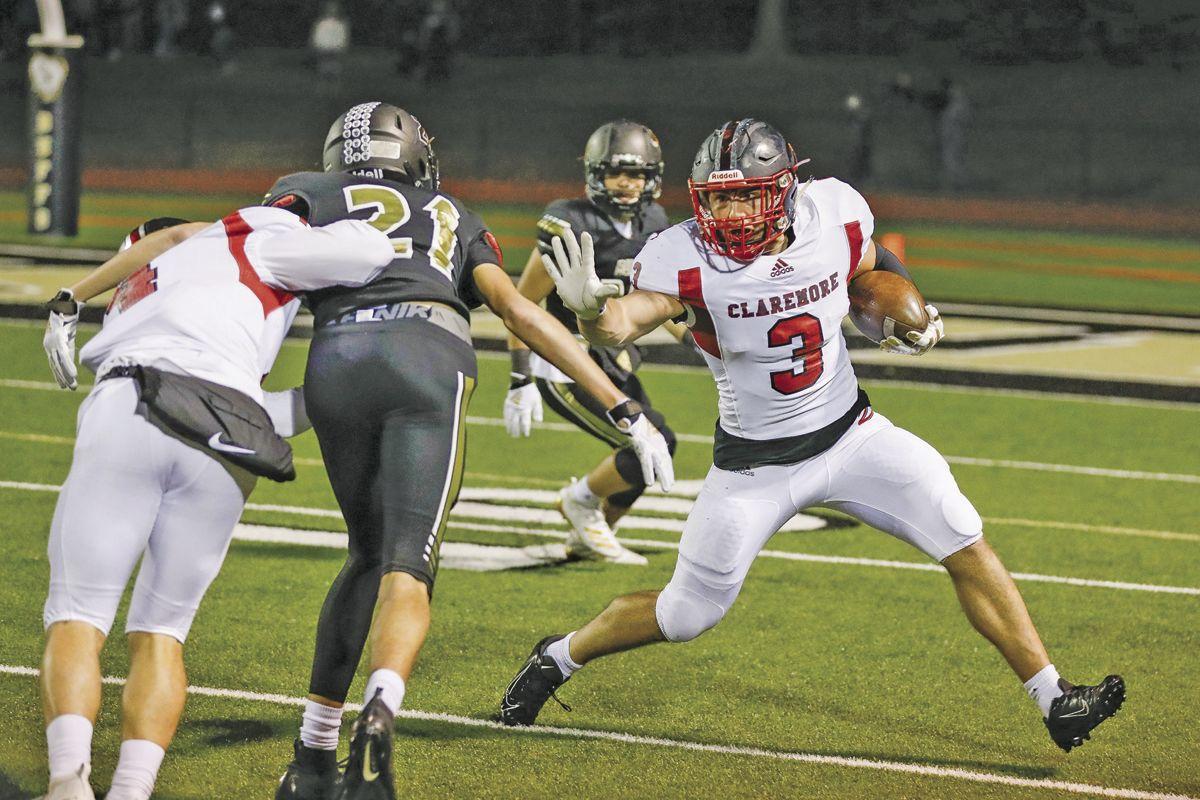 Claremore receiver Dylan Kedzior (3) prepares to stiff-arm McAlester’s Cale Prather (21) during the first round of the Class 5A playoffs on Nov. 15. Kedzior finished with five receptions for 100 yards and two touchdowns, but the Buffaloes advanced with a 49-28 win. 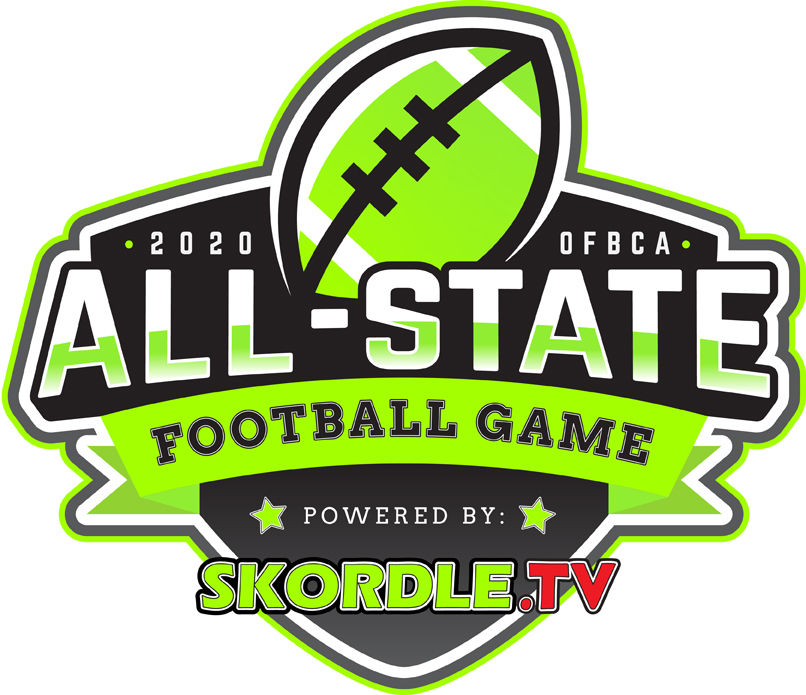 Claremore receiver Dylan Kedzior (3) prepares to stiff-arm McAlester’s Cale Prather (21) during the first round of the Class 5A playoffs on Nov. 15. Kedzior finished with five receptions for 100 yards and two touchdowns, but the Buffaloes advanced with a 49-28 win.

Dylan Kedzior was in shock.

He had just been jolted awake by a phone call at 8 a.m., but perhaps even more surprising was who was on the other line — Claremore football coach Jarrett Hurt.

“I just woke up because I was asleep when he called,” Kedzior said. “I didn’t think that was a possibility for that to happen anymore, so it was just super unexpected. He was basically my alarm clock.”

Much to Kedzior’s surprise, his high school football days haven’t expired just yet.

The Claremore graduate and Northeastern Oklahoma A&M College signee was selected as a late roster entry to the Oklahoma Football Coaches Association All-State game, which will be played at 7 p.m. on Saturday, July 25 at Oklahoma Baptist University’s Crain Family Stadium in Shawnee.

Hurt confirmed the news to the Claremore Progress on Friday.

“I found out earlier this morning (Friday),” Hurt said. “The head coach of the East, Chris Elerick from Stroud, called me and said that they wanted to pick up Dylan for the game, and that was very exciting to me. So I called Dylan and asked him if he wanted to play, and of course he did; he was excited.

“We’re tickled to death for Dylan; he’s one of the most explosive players I’ve ever coached.”

The selection came less than 48 hours after the OFBCA announced its decision to host the game despite the Oklahoma Coaches Association cancelling the original event — which was to be held on the same date in Tulsa — because of the COVID-19 coronavirus pandemic.

“I used to be the president of the OCA several years ago, so I certainly understand their concern and why the board made the decision that they did,” Hurt said. “But I’m also glad the OFBCA decided to go ahead and pick up the game and have it because it’s been a longstanding tradition in the state of Oklahoma to have the All-State game at the end of the summer. My dad played in it, I got to play in it, so I’m glad we’re going to continue that tradition.”

Kedzior wasn’t a member of the OCA’s rosters that were set in January, but the opportunity arose because some players either decided to not play or couldn’t because of college obligations.

He has similar commitments at NEO A&M in Miami, where he reports for preseason training on July 12, but his coaches gave him the OK to compete.

“My coaches are cool with it,” Kedzior said. “They said go do it.”

A 6-foot-2, 215-pound receiver, Kedzior finished with 57 receptions for 937 yards and 14 touchdowns in 2019 while also tallying 32 total tackles, four interceptions and two forced fumbles on defense.

He will be the first Claremore football All-State representative since Mickey Bywaters in 2018.

Skordle will stream the game, but there won’t be attendance restrictions for those who want to watch the contest at the 4,000-capacity stadium.

However, players and coaches will be required to follow health and safety guidelines. OBU will decide precautions fans must take inside the stadium.

“It’s really neat to be around the All-State culture.”