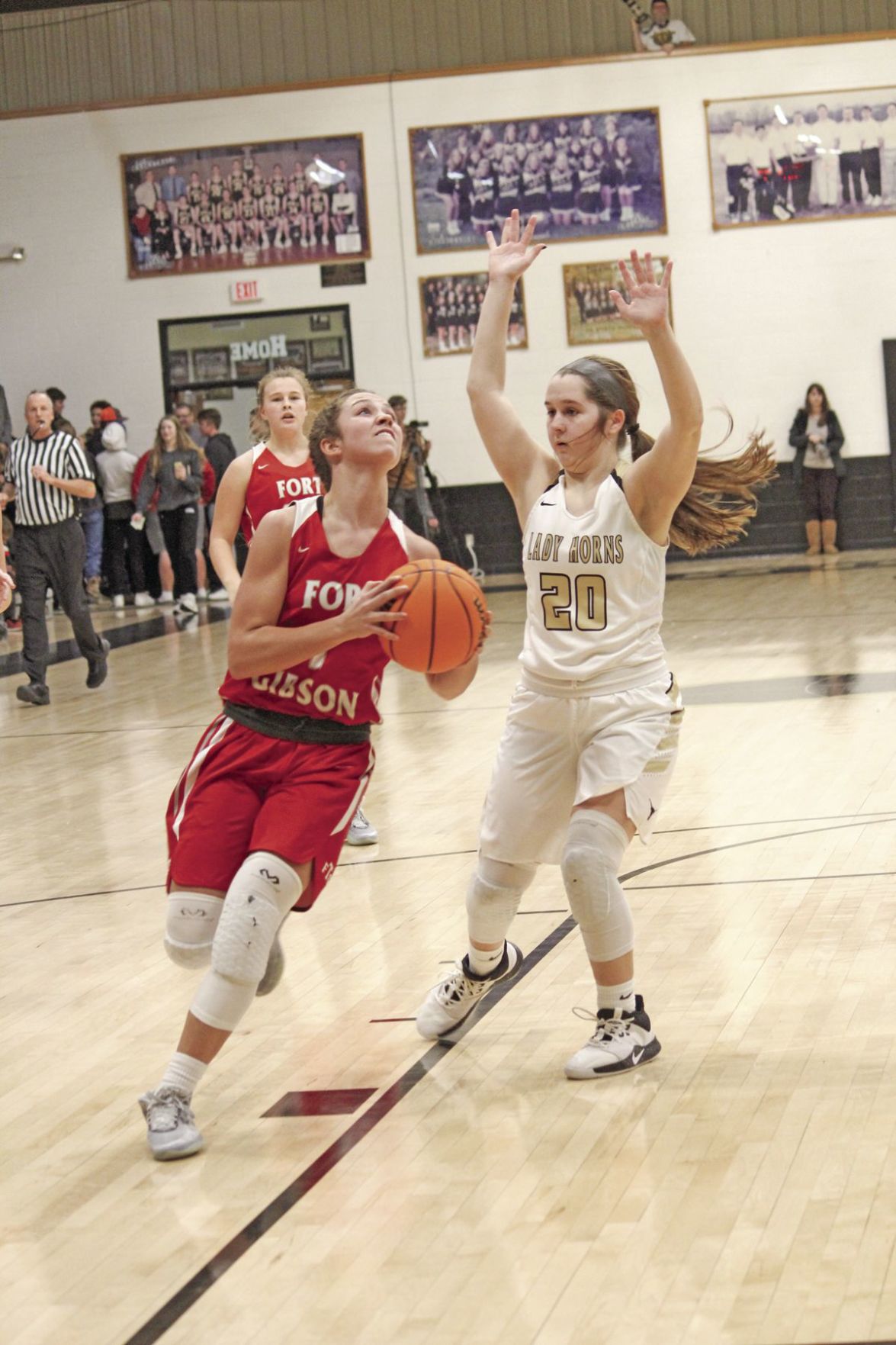 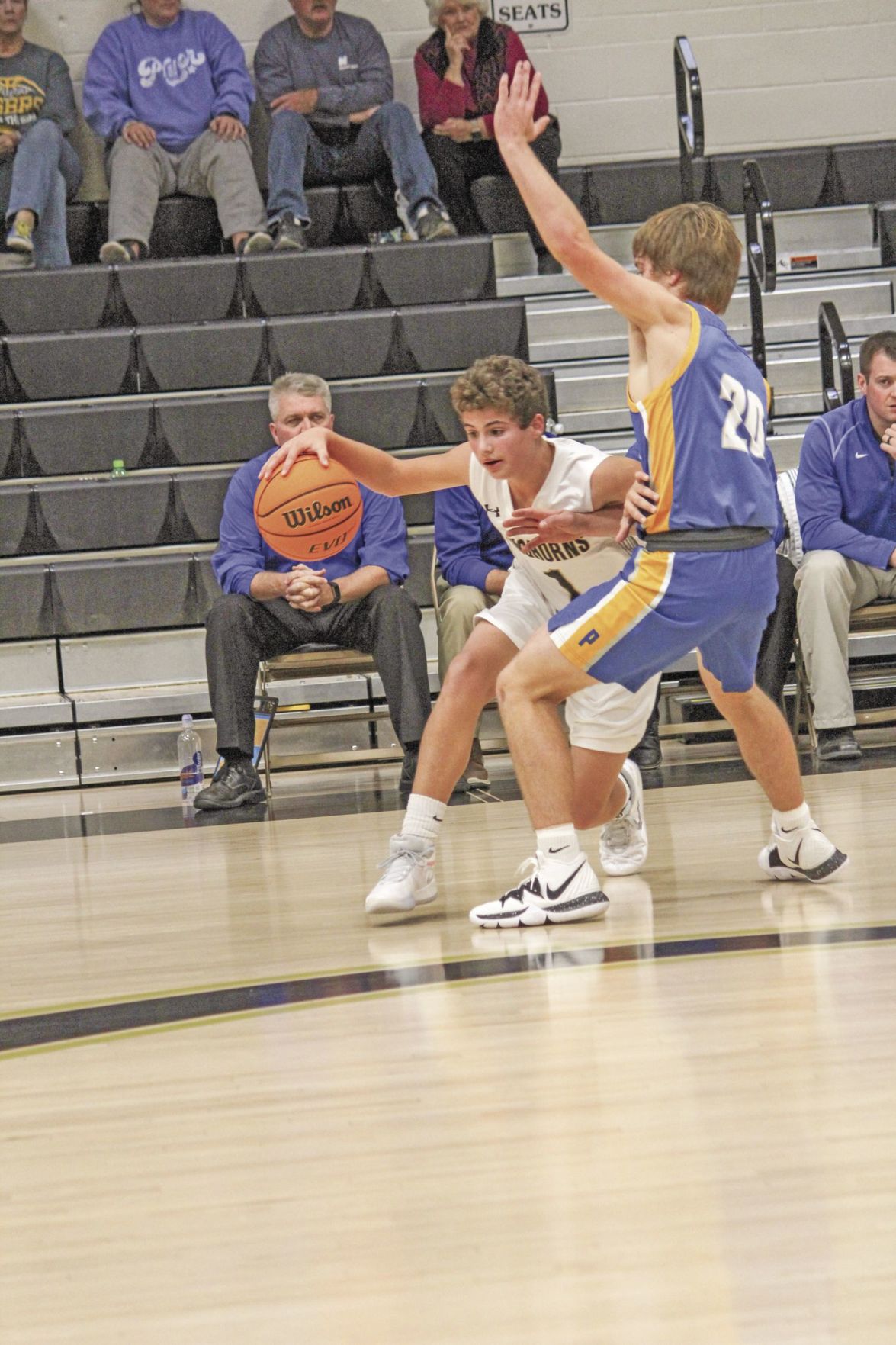 Inola sophomore Tucker Ford (1) does his best to get free from Pryor senior Trapper Gilstrap. Ford was one of five Longhorns to hit a 3-pointer on Tuesday night.

Inola sophomore Tucker Ford (1) does his best to get free from Pryor senior Trapper Gilstrap. Ford was one of five Longhorns to hit a 3-pointer on Tuesday night.

INOLA — Although Inola is hosting the Jerry Oquin Tournament, there was certainly no home cooking when it came to bracket pairings.

The Longhorn squads had the misfortune of opening against top-10 teams in the first round, and both were sent to the consolation bracket with a pair of 20-point losses on Tuesday night.

Coach Travis Bryant’s Lady Horns fell to Class 4A No. 4 Fort Gibson, 58-38, after a valiant comeback push, and the Clyde Barkley-led boys dropped a 67-47 decision to Class 5A No. 8 Pryor in the nightcap.

The girls face Siloam Springs in the consolation semifinals at 7 p.m. Friday, while the boys take on Coweta at 8:30 p.m.

Fort Gibson scored the game’s first nine points, but the Lady Horns cut the deficit to 12-10 heading into the second with a 10-3 run thanks to a trio of 3-pointers from Kelsie Roberts and Macey Eaves.

Roberts led the team with 11 points, and Marley Eaves was close behind with 10. Macey Eaves finished with 7 points.

“We made a run at them, and I felt like we settled down,” Bryant said.

Inola didn’t stay within striking distance for long, though.

The Lady Tigers responded quickly and efficiently, using offensive rebounds and a slew of Lady Horn turnovers to open the second with a 12-0 run.

Those giveaways and second chances put Inola in a 17-point hole at halftime, and it proved to be too much to overcome in a 58-38 loss on Clyde Barkley Court at the Inola Indoor Sports Arena.

The Lady Horns committed 14 turnovers in all, including six in the second quarter.

Bryant attributed those struggles to a reliance on zone defense.

“They just had more possessions because of our inability to rebound and block out,” Bryant said. “We played pretty good defense, and they’d get another chance because we just didn’t rebound the basketball very well. That’s one area we need to improve.

“With our rotations in zone, it’s hard to get a body on a body like we want. We have to do a better job of rotating, finding a body and blocking out.”

The Lady Tigers more than doubled the Lady Horns’ total field goals with 21, 10 of which were 3-pointers.

Emma Wafford, who finished with 12 points, tallied four triples on her own, while Abbye Porterfield and Baylee London each notched three for Fort Gibson.

“They’re a complete team,” Bryant said. “They have a good ballhandler who can get to the bucket, they have shooters, they have size, they move the ball well and they’re well-coached.”

Inola outscored the Lady Tigers, 11-7, in the third quarter to make it a 13-point game at 38-25, but another strong start from Fort Gibson in the fourth—a 13-3 run—put things out of reach for good.

Clyde Barkley doesn’t ask a lot of his young team.

He does, however, require a no-quit attitude, and his players reflected that ideology on Tuesday night.

Despite falling behind 12-0 in the opening minutes of a 67-47 loss, the Longhorns battled the entirety of the contest.

Even when the deficit increased to 24 points in the third quarter, Inola kept chipping away and was two possessions away from making it a single-digit game early in the fourth.

“They never quit,” Barkley said. “I told them, ‘I don’t want to see a quit in a million years. I don’t care which sport. Somewhere down the road, it’ll pay off for us.’

That is high praise for a group of players with little varsity basketball experience.

With only one returning senior, Barkley calls this year’s team one of his youngest squads in his 43-year coaching career.

“I have only one kid who even saw the floor last year,” Barkley said. “We’re not very deep right now, but I like the effort these guys are giving all the time.”

Tuff Jones is that lone senior, and his effort kept the score within a respectable margin.

He scored all his 13 points in the second half, including three 3-balls. Eight of those points came during a 15-7 Longhorn run in the fourth quarter.

The veteran coach isn’t lying about his team’s shooting ability.

Including Jones, five Inola players notched 3-pointers, bringing the team’s total to nine. Hank Parsons, who finished with nine points, tied the senior’s mark with three of his own.

Sophomore Tucker Ford and juniors Walt Spurlock and Zac Biggs each hit one from beyond the arc as well.

However, Pryor’s perimeter shooting was even better.

The Tigers, led by Dawson Alt (23 points) and Nik Jordan (14 points), knocked down 11 triples. The pair combined for 10 of those, with Alt hitting six and Jordan tallying four.

Alt even notched a four-point play early in the second quarter, sparking a 17-7 run. This came moments after a Spurlock 3 brought the Longhorns within eight at 17-9.

With so many players launching shots from deep, free throws were at a minimum.

Pryor went 6-of-11 from the line, but Inola managed only two free shots and missed both.

Although the Longhorns are off to an 0-2 start, Barkley is optimistic about the future.

He said he believes playing against tough Class 5A competition like Pryor and Coweta will serve his team well come time for the Class 3A playoffs.

“Playing this kind of competition will make us better down the road,” Barkley said. “I’d like to see where we’re at come February. They’re not in basketball shape yet, and our schedule is so tough.”