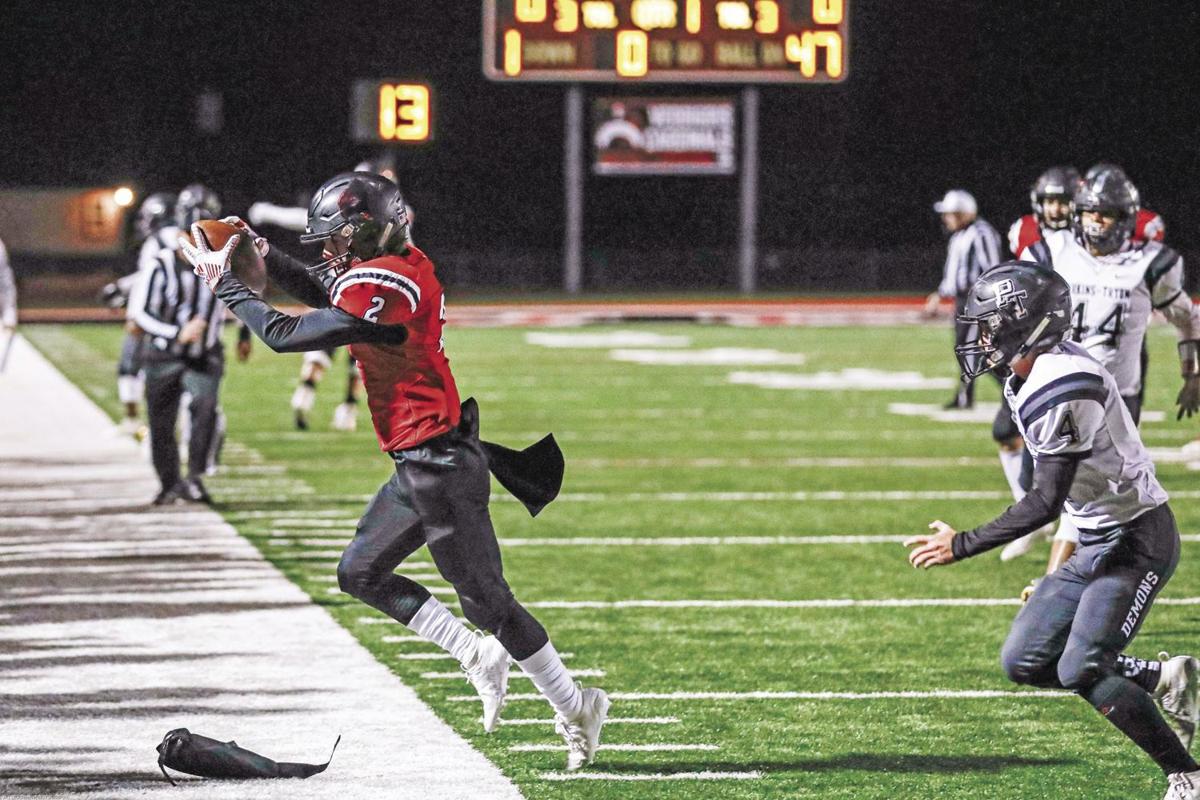 Verdigris senior receiver Toby Willis (2) catches a pass on the sideline during the Cardinals’ Class 3A quarterfinal matchup against Perkins-Tryon. Willis finished with 191 yards receiving and three touchdowns on seven receptions in the 42-28 win. 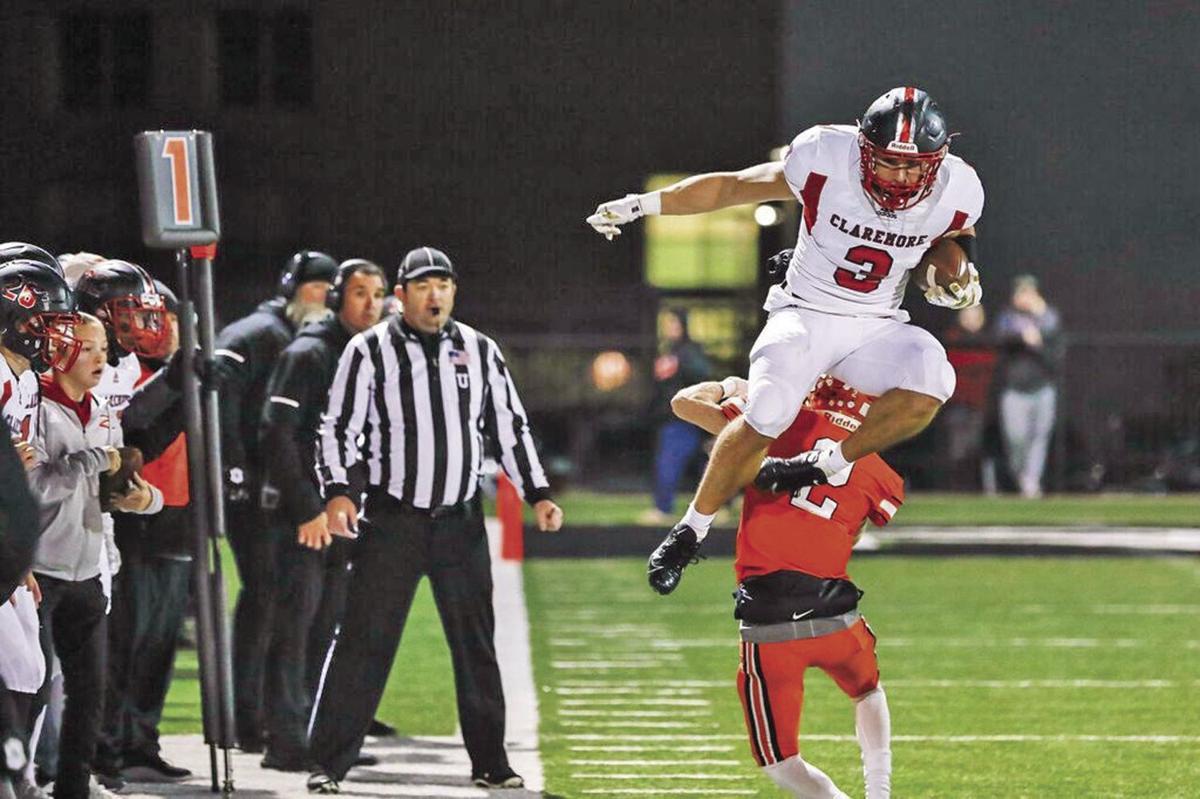 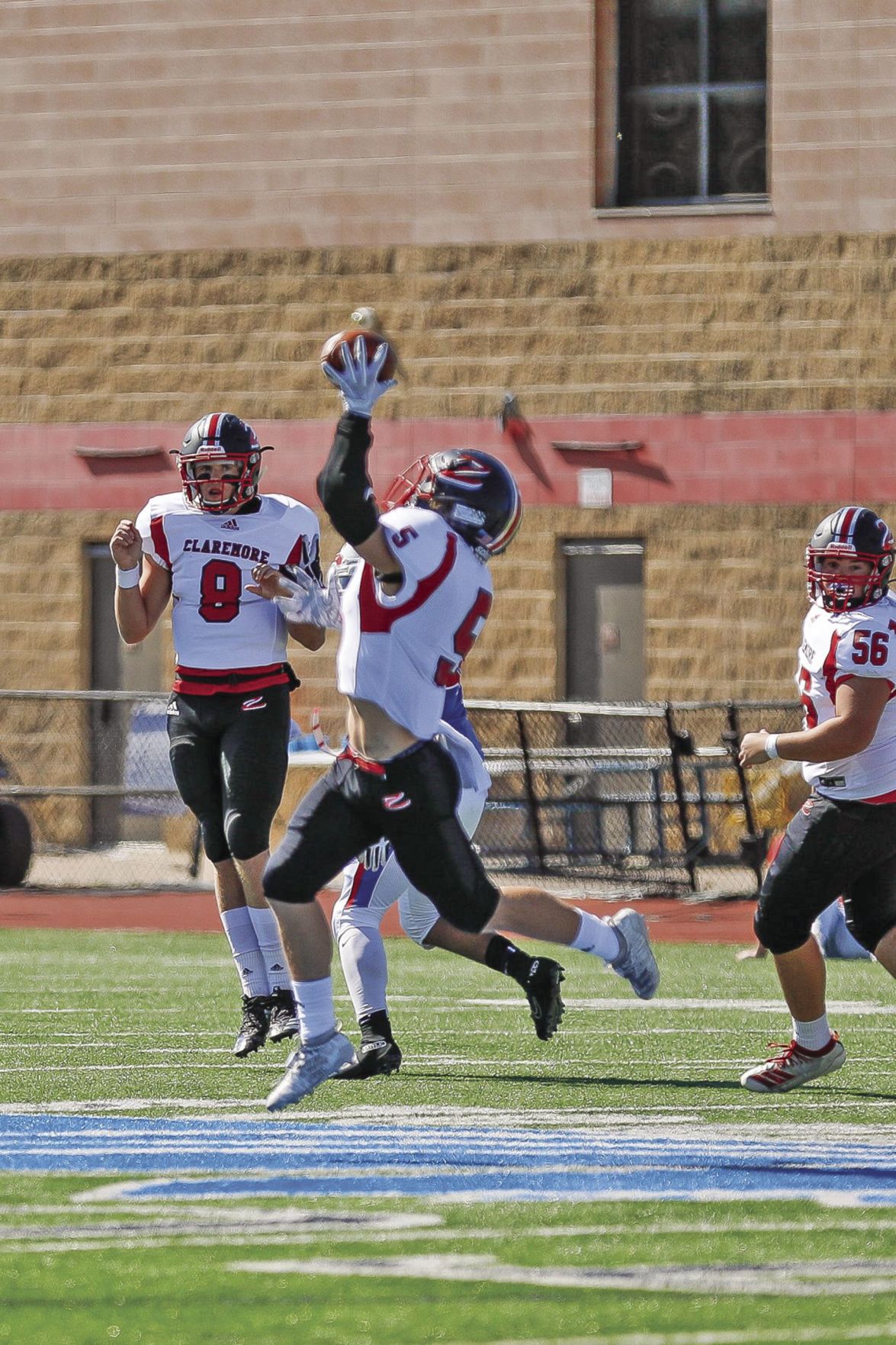 Claremore quarterback Charlie Murdock (8)completes a pass to running back Jace Hightower (5) during a game against Memorial on Oct. 17. Four of Murdock’s five pass completions went for touchdowns in the Zebras’ 56-6 win. 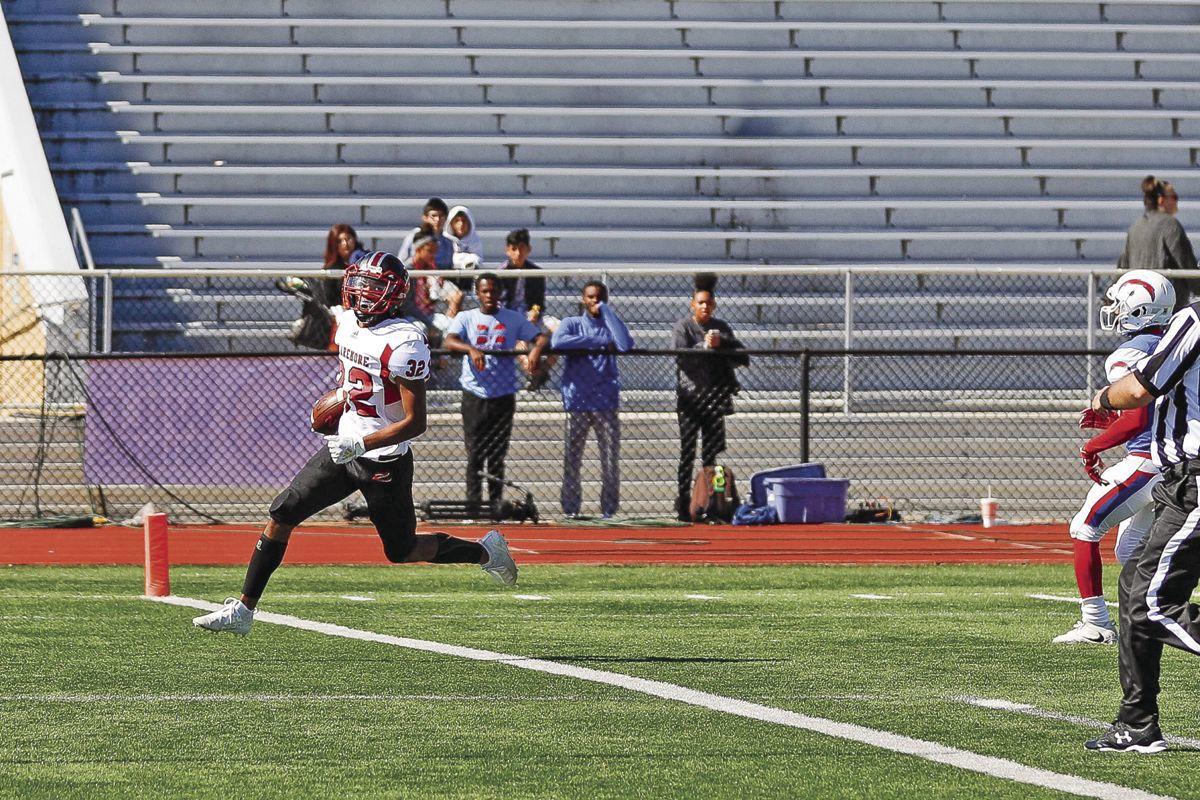 Claremore junior receiver DeShawn Kinnard trots across the goal line against Memorial on Oct. 17. The junior had 103 yards on two catches, both of which went for touchdowns.

Verdigris senior receiver Toby Willis (2) catches a pass on the sideline during the Cardinals’ Class 3A quarterfinal matchup against Perkins-Tryon. Willis finished with 191 yards receiving and three touchdowns on seven receptions in the 42-28 win.

Claremore quarterback Charlie Murdock (8)completes a pass to running back Jace Hightower (5) during a game against Memorial on Oct. 17. Four of Murdock’s five pass completions went for touchdowns in the Zebras’ 56-6 win.

Claremore junior receiver DeShawn Kinnard trots across the goal line against Memorial on Oct. 17. The junior had 103 yards on two catches, both of which went for touchdowns.

High school football seems to fly by faster and faster each year, and 2019 was no different.

Although eight months and some change stand between the nine Rogers County teams and next season, there are plenty of highlights and surprises to reminisce about as we move further into the offseason.

Here is a look back at the season through the eyes of Progress sports editor Kevin Green.

Editor’s note: Selections are based on events Green witnessed firsthand unless otherwise stated.

Toby Willis vs. Perkins-Tryon — Not even the second-ranked defense in Class 3A could stop Toby Willis.

The Verdigris senior receiver continually found himself alone in the Perkins-Tryon secondary despite being double and triple teamed most of the game, finishing with 191 yards and three touchdowns on only seven receptions—about 27.3 yards per catch.

At halftime, Willis had more receiving yards (162) than the Demons had total yards (147).

Honorable Mention: Dylan Kedzior vs. East Central — After being officially coronated as the Homecoming King before the game, it didn’t take Dylan Kedzior long to implement his will on both sides of the ball.

The senior caught five passes for 132 yards and two touchdowns. He also returned an interception 66 yards for a touchdown, helping Claremore to a 55-15 win on Oct. 4.

Four of them went for touchdowns.

His only completion that didn’t go for a touchdown was a 19-yard pass to running back Jace Hightower.

BREAKOUT PLAYER OF THE YEAR

Ethan Trosky (WR, Inola) — Despite having never played receiver before this season, Ethan Trosky proved to be one of the area’s most elite players at the position.

The senior wideout finished the regular season with 926 yards receiving and a school-record 16 touchdowns on 40 receptions.

He broke the record against Vinita on Nov. 1, surpassing Jacob Norman’s mark of 15, which was set in 2016.

The juniors saw time at both positions throughout the season, finishing with 530 yards receiving and eight touchdowns on 35 receptions while also rushing for 321 yards on 67 touches.

The junior debuted against Bartlesville on Sept. 6, rushing for 92 yards on 20 carries and snagging four receptions for 33 yards and a touchdown.

Against Memorial on Oct. 17, he caught two passes and scored on both, finishing with 103 yards (51.5 yards per catch).

Parnell eclipsed the 100-yard mark three times, but his best game came in a 62-14 win over Locust Grove in which he rushed for 187 yards and four touchdowns on 16 carries.

GAME OF THE YEAR

Claremore vs. Bartlesville — Who doesn’t like a good comeback?

The game looked all but over after the Zebras jumped out to a 26-0 halftime lead, but the Bruins emerged from the locker room a different team, scoring 28 of the next 35 points to come within five at 33-28 late in the fourth quarter.

It took an Ethan Grimett interception at midfield with less than four minutes remaining to stave off the rally and secure Claremore’s first win over Bartlesville.

The Zebras then drove 44 yards in three minutes and five seconds, with Murdock capping the drive and the game with a 3-yard touchdown sneak.

Honorable mention: Verdigris vs. Perkins-Tryon — The Cardinals had never qualified for the semifinals, but that all changed on Nov. 22.

Verdigris racked up 481 yards of offense and 42 points on the Demons’ second-ranked defense that came into the game surrendering only 10.2 points per game.

Freshman quarterback Dylan White played out of his mind, tallying 387 yards through the air while tossing four touchdowns, and Willis was on the receiving end for nearly half those yards.

The defense did its part as well, forcing two turnovers while holding P-T to 0-of-3 on fourth-down conversions.

Things were tied at 14 late in the second quarter, but Verdigris scored 28 of the next 42 points—including a 21-0 run—to secure its first semifinals berth in school history.

WISH I COULD’VE BEEN THERE

Verdigris vs. Berryhill — Verdigris’ 35-21 win over previously unbeaten Berryhill for the District 3A-4 championship on Nov. 8 is the obvious choice here.

Coming into this game the Chiefs hadn’t lost a regular season contest since Nov. 6, 2015.

That is two days over four years. But Verdigris ended that streak in emphatic fashion.

Berryhill managed to rally from a 21-7 halftime deficit to knot the score in the fourth quarter, but an incredible seven-play, 80-yard drive capped by a 14-yard touchdown strike from White to Willis with 4:41 remaining put the Cardinals up for good.

Willis caught three passes on that drive and finished with 10 receptions for 99 yards.

We had this game staffed by correspondent Glenn Hibdon, but this kind of performance was history in the making and something I would’ve loved to witness myself.

Honorable Mention: Chelsea vs. Ketchum — Chelsea isn’t a powerhouse by any means, but it sure looked it on Sept. 6.

Led by a 233-yard, four-touchdown outing on the ground from sophomore running back Cash Ramsey, the Green Dragons dismantled Ketchum in the season opener, 52-13.

Although the Green Dragons finished the year with a 1-9 record, it would’ve been nice to sneak this game into the coverage schedule and give the Chelsea players some recognition for their rare accomplishment.