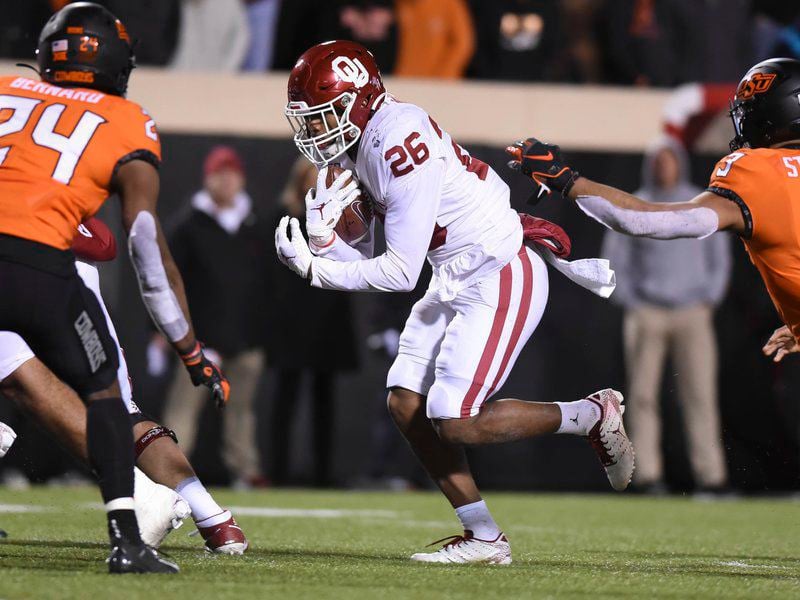 OU's Kennedy Brooks runs with the ball during the Bedlam game on Saturday at Boone Pickens Stadium. 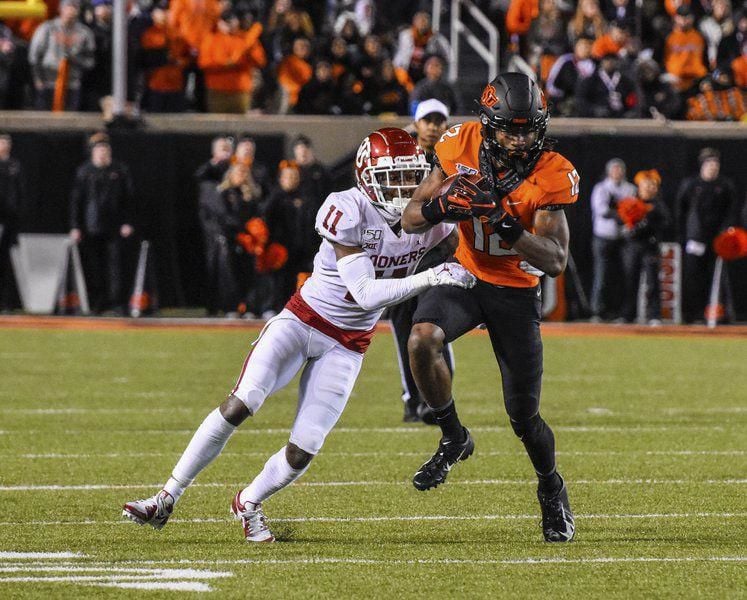 OU's Kennedy Brooks runs with the ball during the Bedlam game on Saturday at Boone Pickens Stadium.

For the Cowboys, it is a common trend that has become nearly synonymous with Bedlam. Except for maybe the last two years, many OSU fans feel not enough is done to hang with the powerhouse that is Oklahoma from year to year.

The same could be said about the 2019 edition of the rivalry game, which the Sooners won in a 34-16 decision.

That is the fewest points scored in Bedlam by OSU since losing 27-0 in 2009. So yeah, conservative is a good word here.

Even after Dru Brown completed a 42-yard pass to Dillon Stoner to put the Cowboys at the OU 18 with 1:58 remaining in the first half, OSU ran the ball five of the next six plays and settled for a field goal.

Things didn’t get much better after that, for the Cowboys managed only 152 yards on their five second-half drives.

Did some of that have to do with the Sooner defense? Absolutely, but the OSU offense left a lot to be desired as well.

Although it is easy to point a finger at the Cowboys for their shortcomings, what about OU?

The Sooners didn’t exactly scream “electric” despite scoring 34 points on a defense that held opponents to 20 points per game during OSU’s four-game winning streak.

It seemed OU rarely looked for the big play down the field, for Jalen Hurts threw about eight fewer passes than his average coming into the game.

His longest pass completion went for 30 yards to Jeremiah Hill.

Of course, the wind probably played a role in that. It isn’t the smartest idea to throw deep balls into 40-mph wind gusts.

That isn’t the main complaint here, though.

A win is a win, but was an 18-point road win over the 21st-ranked team in the country good enough?

The Sooners are battling for a College Football Playoff spot, and with it being so late in the season, style points matter.

There were two instances in the fourth quarter where OU should’ve added to its advantage but chose the sportsmanship route.

After stopping the Cowboys on fourth down, the Sooners took over at the OSU 32 with 8:36 remaining.

Should be easy points for a team like OU, right? Wrong.

The Sooners ran the ball three times for 5 yards while throwing one pass for 1 yard. Throw in a holding penalty and false start, and suddenly OU was punting from 9 yards behind where it started the drive.

However, the Sooners got a big defensive stop again shortly after by way of a Parnell Motley interception.

With 3:18 still on the clock, there remained plenty of time to add some points for sake of style, and it appeared OU would do just that.

Rhamondre Stevenson broke loose for a 45-yard gain to the Cowboy 24, and he followed that up with what looked to be a 24-yard touchdown on the next play.

Sweet relief. A 25-point win (41-16) would certainly look a lot better than an 18-point win in the eyes of the committee, especially after Utah dismantled Colorado by 30, 45-15, earlier in the afternoon.

Unfortunately, a holding penalty on Marquis Hayes negated the score, and the Sooners decided to call it a night from there.

That is a minimum of 10 points left on the board. Those points mean everything when the committee decides which team to rank higher.

After close wins against unranked Iowa State and TCU in recent weeks, a big blowout win against a ranked team wouldn’t hurt.

Is 18 points considered a blowout in football? That is up for debate.

However, unless you’re the Atlanta Falcons or Baylor, 25 points is most likely a nail in the coffin for any opposing team, regardless of the quarter.

It’s picky to say 34-16 isn’t good enough, but the committee is a picky bunch.

OSU was likely to drop out of the rankings regardless of margin of defeat, so why not win by as much as possible?

The committee doesn’t take sportsmanship into account when ranking teams. It is simply who looks more impressive.

Thus far, Utah probably looks like the more impressive team to the committee.

Of course, this column was written before the College Football Playoff rankings were released on Tuesday night, and the Sooners could just as easily be ranked ahead of the Utes.

It is all a moot point, though, if OU wins while Utah and Georgia lose to their respective competition on Championship Weekend. In that scenario, the Sooners are in for the third-straight season.

But what if OU squeaks past Baylor, Utah curbstomps Oregon and Georgia loses to LSU?

How important would’ve an additional 7-14 points against OSU been for the Sooners in that case?

Only time will tell. For now, OU loyalists and diehards must become the biggest Oregon and LSU fans this weekend and hope for favorable outcomes.

The Sooners’ best shot at the final four could very well rest in those teams’ hands.