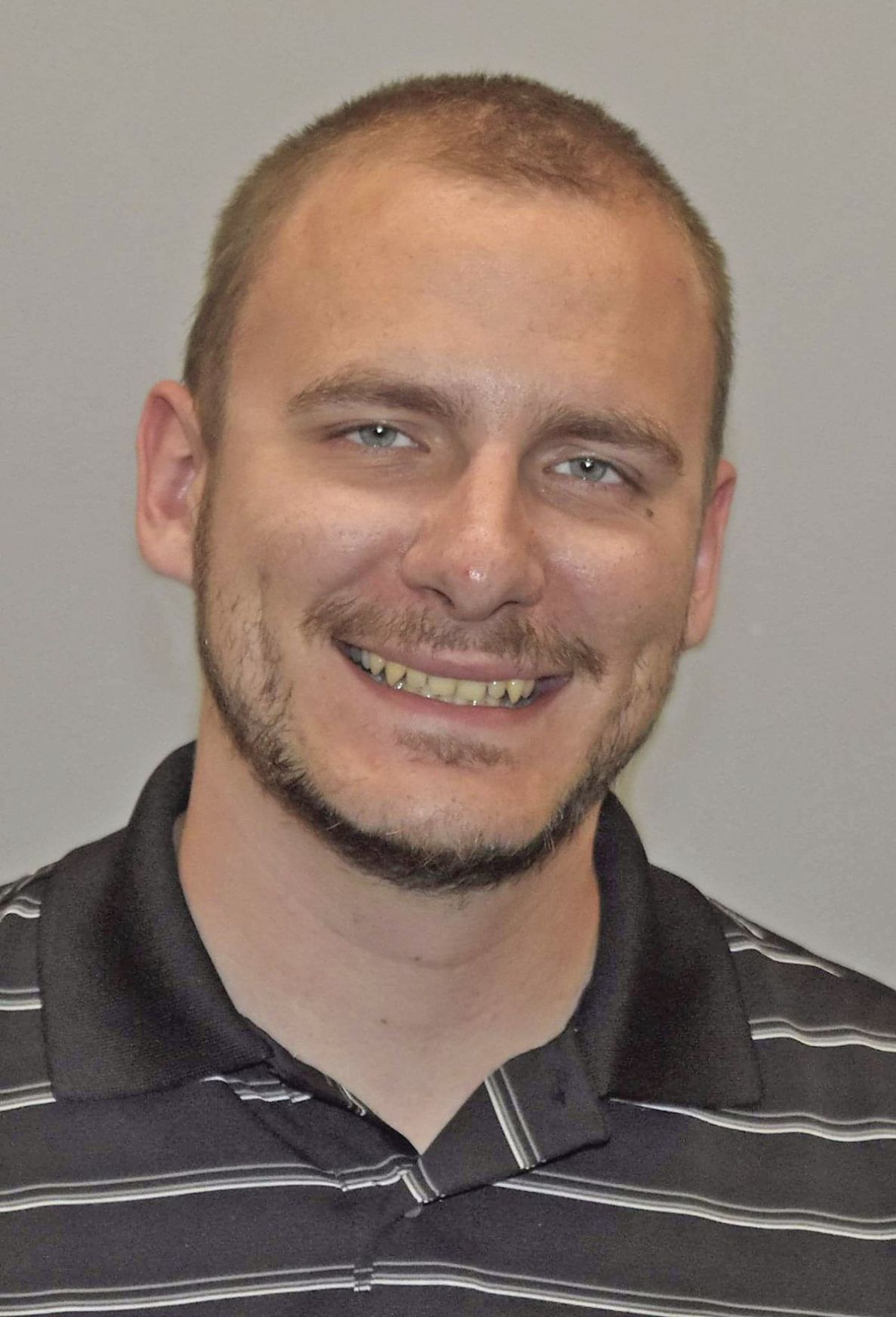 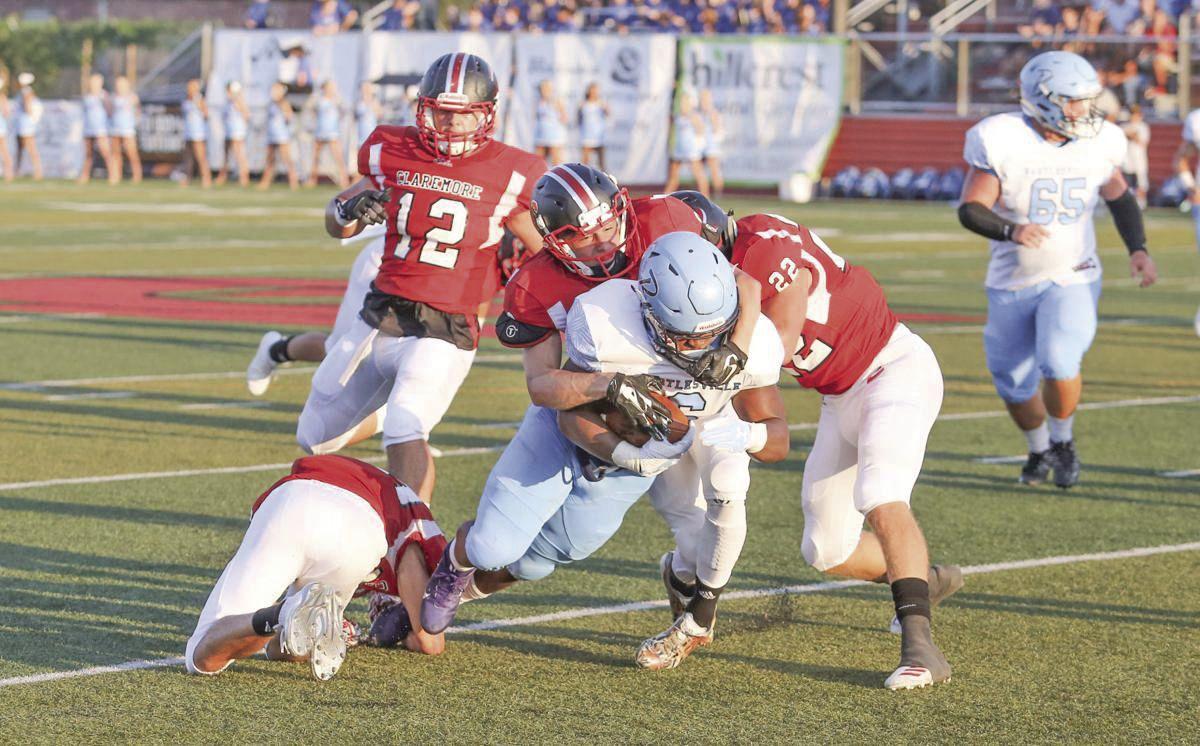 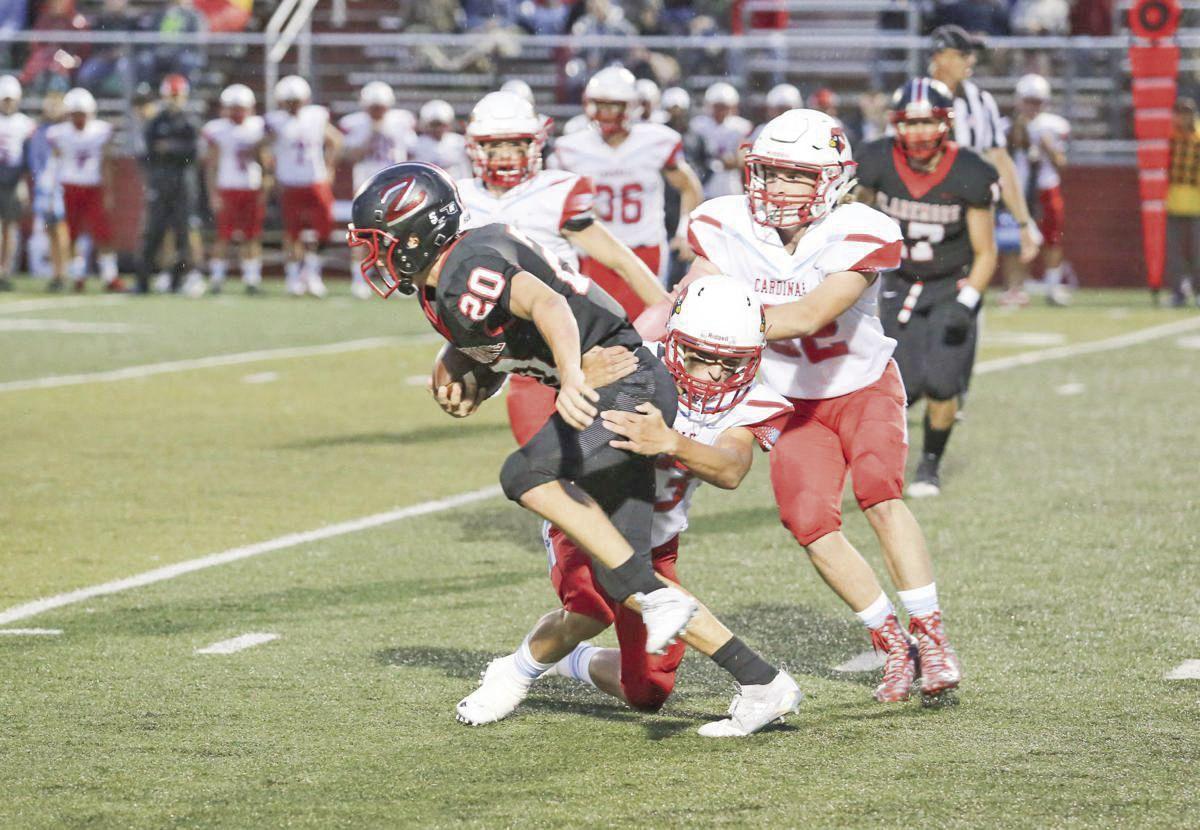 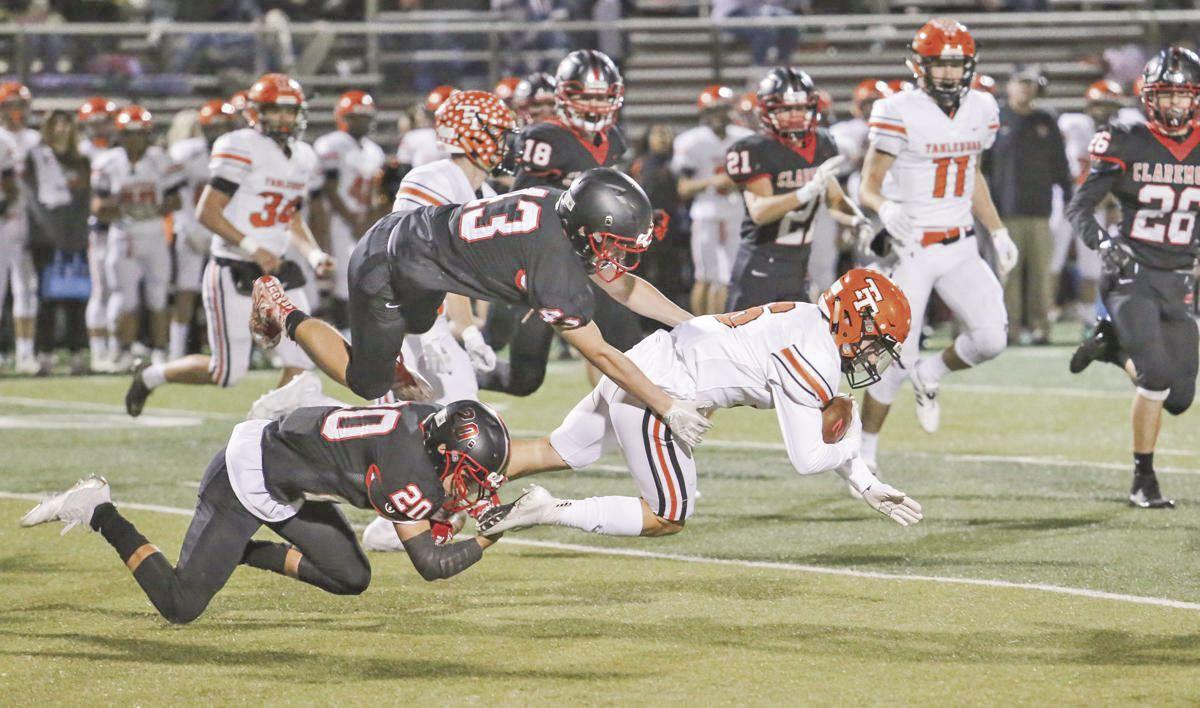 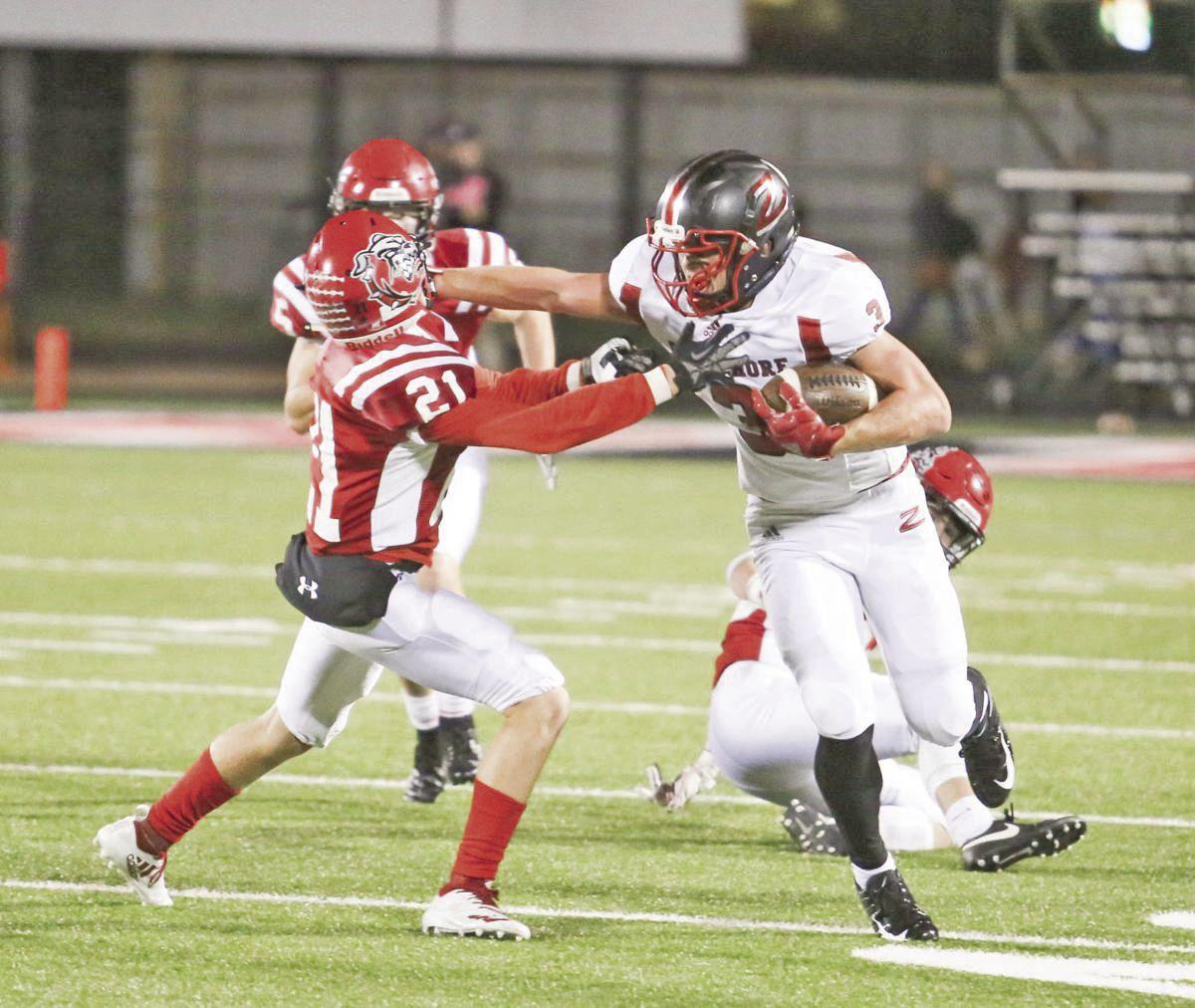 Editor’s note: This is the second installment of a series where Progress sports editor Kevin Green ranks all 10 Claremore football games for the 2019 season.

If not for standout running back Sevion Morrison, this game would’ve probably been included in the bottom five.

Morrison was a breakout player for Edison last season, rushing for 2,728 yards and 35 touchdowns while averaging nearly 12 yards per carry.

Most of those numbers — 1,745 yards and 26 touchdowns — came in the final five games of the season.

That means he averaged 349 yards per game down the stretch.

He eclipsed 400 yards on two occasions to go along with one game in the 300s and five over the 200-yard mark.

Now a Division I recruit, Morrison is back and looking to improve his already astronomical numbers.

Can the Zebras limit his damage? Just take a look at last year’s results.

Last time: Claremore was the only team to have even an iota of success against the speedster.

In two games against the Eagles, the Zebras held Morrison to two of his three lowest outings of the season.

Christian Gotcher nailed a 27-yard field goal in the final minutes to give Claremore the win.

Claremore fared even better in the first round of the playoffs on Nov. 9, becoming the first team to hold Morrison under the century mark at 89 yards. The Zebras went on to win handily, 34-7.

Skiatook certainly isn’t the most exciting team to watch.

The Bulldogs can light it up against bad teams, but high scores against quality opponents is a rarity.

Regardless, its flexbone-style offense gets the job done.

Skiatook experienced a bit of a dropoff last season after reaching the semifinals in 2017, finishing fourth in District 5A-4, but all three district losses could’ve gone either way.

Don’t be surprised if Skiatook challenges for district supremacy once more in 2019.

Last time: Claremore and the Bulldogs seem to always produce a classic, and last season was no different.

Despite committing four turnovers, the Zebras managed to escape with a 17-14 double-overtime road win.

The game went into overtime tied at 7, and after exchanging touchdowns, Gotcher gave Claremore the lead for good on a 20-yard field goal.

Skiatook nearly forced a third overtime with a field goal of its own on the ensuing possession, but Jake Gilmore blocked the 27-yard attempt to seal the victory.

Similar to Skiatook, Tahlequah provides a physical challenge to the Zebras.

Claremore is 1-2 in the last three meetings with the Tigers, and though it is on the wrong side of that figure, there were no blowouts.

In fact, those matchups were decided by an average margin of 5.6 points.

After suffering through years of obscurity, Tahlequah has made the playoffs every year since 2014.

However, much like Claremore, the Tigers have teetered just outside the Class 5A elite bubble, taking a backseat to the likes of Carl Albert and Bishop McGuinness.

Last season, Tahlequah reached nine wins for the first time since 1991, though, and it could very well surpass that total in 2019.

The top of District 5A-4 is going to be quite crowded.

Last time: The Zebras rallied in the second half, but the initial deficit was too much to overcome in a 21-17 loss.

Claremore trailed 14-0 at halftime and didn’t score until near the three-minute mark in the third quarter.

A 24-yard touchdown pass from Charlie Murdock to Dylan Kedzior with 1:01 remaining in the game brought the Zebras within four, but the Tigers’ lone second-half score — a 33-yard passing strike — with 8:11 left proved to be the difference.

This is Claremore’s chance to prove it belongs in the title hunt.

That is quite a turnaround from the 5-5 season the Cardinals endured in 2017.

Before that lone defeat, Collinsville dismantled opponents to the tune of 39.9 points per game while allowing an average of only 7.2 points, including four shutouts.

The Zebras were one of those unfortunate victims, falling 31-0 at home on Sep. 21.

It is not overselling it to say the fate of Claremore’s season rests on its performance in this game.

If the Cardinals are anything like they were last season, even a close loss would bode well for the Zebras with it being only Week 4.

Another 30-point loss, though, could be detrimental to the team’s psyching moving forward.

A win could mean the beginning of the best season in Claremore history.

Last time: No need to go into great detail with this one.

The Zebras couldn’t run the ball, and they couldn’t stop it either, leading to the lopsided score mentioned above.

The team of Jake Tuttle, Brayden Burd and Malcom Tillman combined for five touchdown runs, meaning all the Cardinals’ scores came on the ground.

Luckily for Claremore, Burd, who scored on runs of 23 and 46 yards, is the only one returning from that trio.

It might be cliché, but the first game of this season is the most crucial.

Bartlesville won’t be the best team Claremore faces in 2019. Nor will this game feature playoff implications.

To an outsider, this is simply another ordinary season opener. The Zebras know better.

This contest is all about establishing confidence.

Claremore has never beaten the Bruins in football.

According to IWasAtTheGame.com, Bartlesville has won all five meetings between the teams dating back to 2008. The Bruins have outscored Claremore, 166-69.

The coaches know it, the players know it and the fans know it. This one means more.

Add in the fact that Bartlesville’s Custer Stadium recently underwent a facelift with the installation of new turf and playclocks, it is the perfect time for the Zebras to secure that elusive win.

Playing spoiler to the reopening of their rival’s 65-year-old stadium would be the ideal way to begin the season.

If Claremore can get that done, expect the dominoes to fall in a favorable fashion all the way to the postseason.

Last time: The Zebras offense struggled to find points in the 2018 season opener, dropping a 21-14 decision to Bartlesville at Lantow Field on Aug. 31.

Claremore scored within the first three minutes when Murdock found Gilmore for a 37-yard touchdown, but it wouldn’t find the end zone again until 19.6 seconds remaining in the game.

Murdock threw a 15-yard strike to Quentin Skinner to get the Zebras within seven points, but the Bruins recovered the ensuing onside kick to seal the deal.

Kevin Green is the Claremore Progress sports editor. He can be reached at kgreen@claremoreprogress.com during the week and kevingreenmedia@gmail.com on weekends.