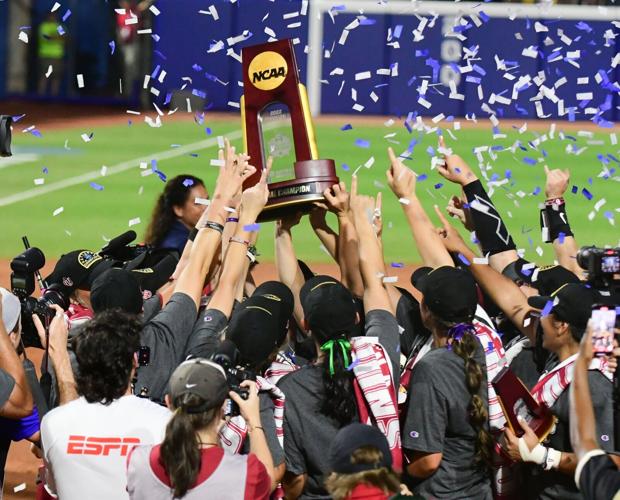 Oklahoma players hold up the National Championship trophy Thursday after defeating Texas 10-5 in the final game of the WCWS championship series at Hall of Fame Stadium. 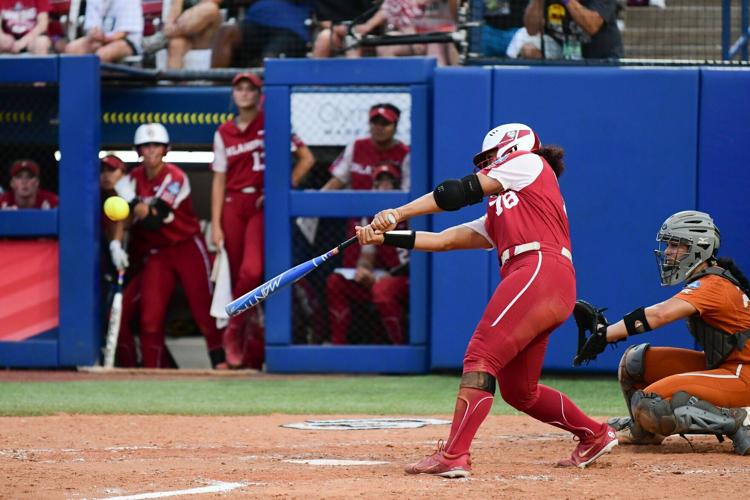 OU's Jocelyn Alo connects with the ball during the Sooners' game against Texas, Thursday, June 9, 2022, at ASA Hall of Fame Stadium. (Kyle Phillips / The Transcript) 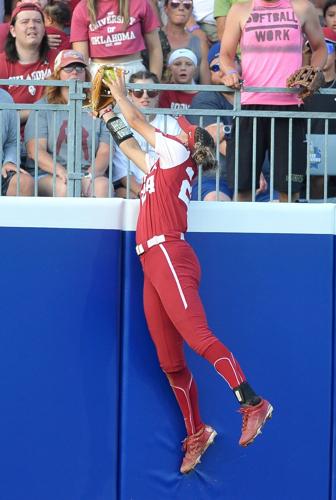 Oklahoma players hold up the National Championship trophy Thursday after defeating Texas 10-5 in the final game of the WCWS championship series at Hall of Fame Stadium.

OU's Jocelyn Alo connects with the ball during the Sooners' game against Texas, Thursday, June 9, 2022, at ASA Hall of Fame Stadium. (Kyle Phillips / The Transcript)

OKLAHOMA CITY — The Texas offense was already surging when Courtney Day stepped to the plate.

The Longhorns led 2-0 in the bottom of the first and had a runner on third base, as Oklahoma looked to be in trouble early. Needing one out, OU pitcher Jordy Bahl delivered the pitch down the middle to Day.

The ball soared off the Texas first baseman’s bat towards the centerfield fence with the makings of a two-run homer.

That was until Jayda Coleman got there.

The Sooners’ center fielder leaped in the air and made a spectacular grab before the ball cleared the fence, retiring the inning and keeping the Longhorns from taking a four-run lead.

It was that play, among several other defensive highlights, that helped lead the Sooners to a 10-5 win over Texas on Thursday. The win secures their second straight championship in the Women’s College World Series and the program’s sixth overall.

For OU coach Patty Gasso, that play set the tone for the Sooners.

“I was a little sick to my stomach for a second as I saw [the ball] getting some distance,” Gasso said. “If Jayda [can] get up on the wall and reach, she’s going to catch it, and I know that about her. She is an incredible, incredible athlete.

“That was a big momentum turn for us because [of how] easily the score could have looked a lot different than 2-0. I was really proud of her efforts and trying to make some things happen defensively.”

That defense was particularly needed with the Sooners’ high-powered offense struggling, as they were held scoreless for the first three innings.

Another pivotal play came in the bottom of the third inning. With the Sooners’ still facing a two-run deficit, OU shortstop Grace Lyons scooped up a grounder and got it to second baseman Tiare Jennings, who threw it to first baseman Taylon Snow to complete the double play and finish the inning.

“I think there [were] a lot of really big defensive plays that [gave] us momentum,” Coleman said.

That double play helped finally get the Sooners’ offense moving.

The Sooners tied the game with two runs in the top of the fourth inning, but the offense’s patented explosion came in the fifth inning. Alyssa Brito got things started with a double to score Jennings for the go-ahead run, but Kinzie Hansen helped blow the game open with a three-run home run.

The Sooners added four more runs in the sixth inning, including a three-run home run from Lyons, that pushed the lead to eight runs.

“The defense is what really created this momentum for us over and over until we could find a way to get on the board,” Gasso said. “Once we did, it just started to open up. Just timely hitting, clutch hitting when we needed it.”

The Longhorns attempted a late rally in the bottom of the seventh behind a three-run home run from Mia Scott. But Hope Trautwein, who pitched all seven innings in the Sooners’ Game 1 win Wednesday, came in for the final frame and forced a ground out to seal the game.

Jocelyn Alo, Trautwein, Jennings, Coleman and Rylie Boone were named to the WCWS All-Tournament Team, with Alo finishing as the tournament’s Most Valuable Player.

Gasso didn’t speculate on where this team ranks among the Sooners’ six championship teams, or among college softball’s all-time great teams. However, what stood out to her about this year’s team was its chemistry and love for each other.

“It’s surreal,” Gasso said. “The game goes by fast, and there’s highs and there’s lows… I sit back like a fan. That’s what I do. I sit and watch, and it’s just prideful to see these guys do that, to see them get emotional like I am right now. They don’t realize how good they are. Maybe I don’t realize how good they are. Everybody asks us, and we just play. We just play. We love to have fun and love to play.

“It’s fun to watch them play, and their passion and exuberance and love for playing is really what kind of brings them together.”

Jesse Crittenden is the sports editor of The Transcript and covers OU athletics. Reach him at jesse@normantranscript.com or at 405-366-3580