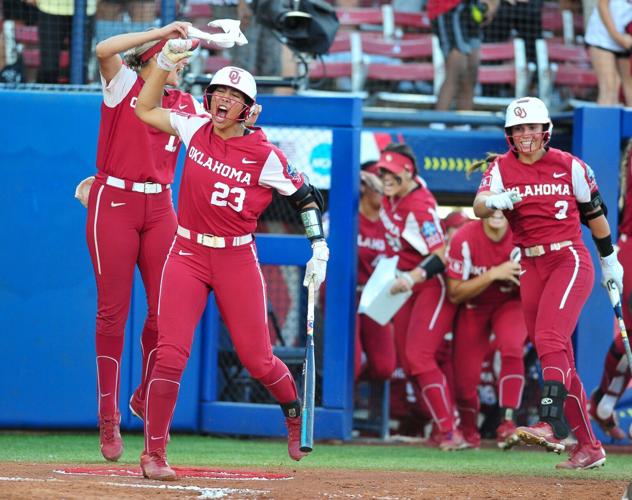 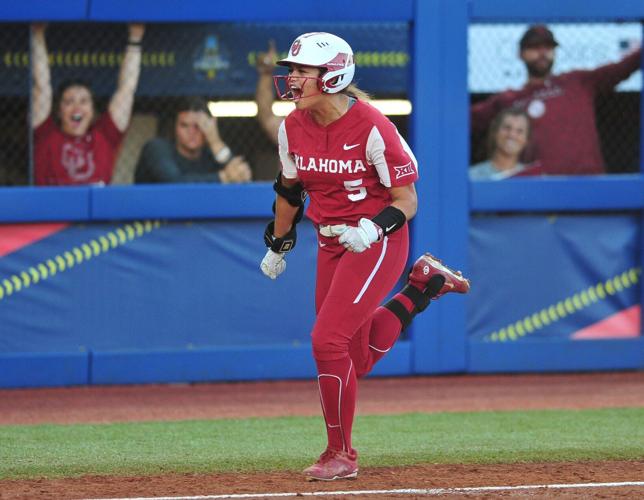 OU's Taylon Snow celebrates a home run as she rounds the bases during the Sooners' game against Texas, Wednesday, June 8, 2022, at ASA Hall of Fame Stadium. (Kyle Phillips / The Transcript)

OU's Taylon Snow celebrates a home run as she rounds the bases during the Sooners' game against Texas, Wednesday, June 8, 2022, at ASA Hall of Fame Stadium. (Kyle Phillips / The Transcript)

Oklahoma hit six home runs on its way to a 16-1 win over Texas on Wednesday.

Here’s a look at the WCWS records that were broken on Wednesday evening:

With no outs and a runner on, Jocelyn Alo quickly flipped a 1-0 deficit into a 2-1 lead with a home run into left field. In the bottom of the fifth, Alo sent another ball over the left field wall for her fifth home run during the tournament.

No other player had ever had more than four during the Women’s College World Series. On the very next at-bat, Tiare Jennings hit her second homer of the evening to join her teammate in a tie for the record.

Texas’ Courtney Day is third on the home run list during the Series with three.

Alo tied the previous record during last season’s national championship run. Her 12 career home runs during the tournament are also an NCAA record.

4 — Alo and Jennings weren’t the only Sooners to use the long ball to their advantage.

The Sooners finished the first game of the championship series with six home runs as a team. Oklahoma broke the previous WCWS record for home runs in a game by two.

54 — Oklahoma’s march to the national title last season came behind a historic offensive performance during the WCWS.

With at least one more game to play, the 2022 squad has already topped the WCWS record for runs during the tournament with 54.

The Sooners entered the game needing 11 runs to tie the previous record of 49, and were able to set a new mark after taking a 12-1 lead in the bottom of the fourth.

12,234 — The tournament set a new record for attendance with 12,234 people coming out to watch the first game of the championship final.

The event has had over 12,000 spectators in each of the eight sessions so far.

Tarik Masri is a sports reporter for The Transcript covering OU athletics and area sports. You can reach him by emailing tarik@normantranscript.com