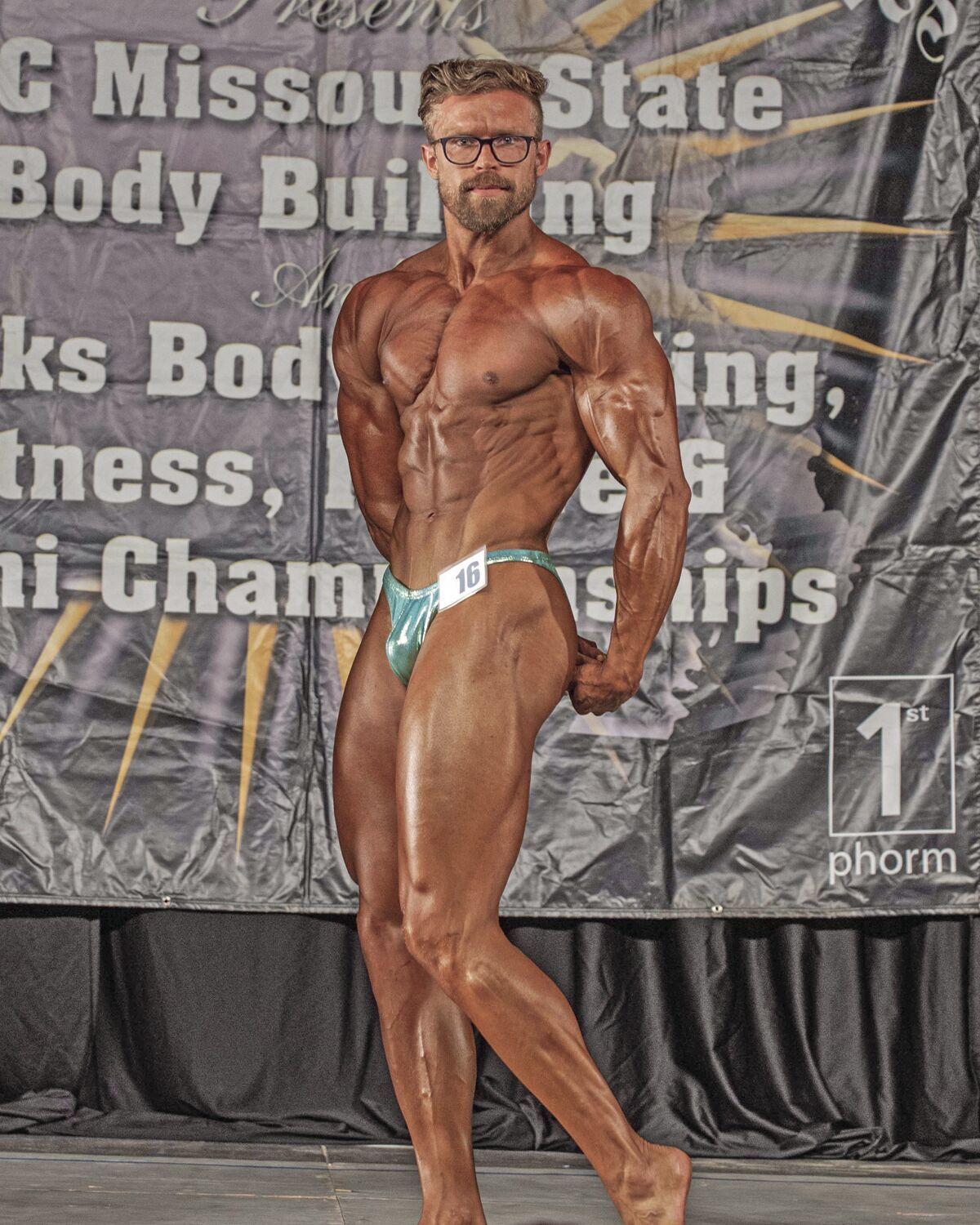 Will Kujawa hits the "side tricep" pose during pre-judging, where athletes are compared side-by-side in a variety of mandatory poses for a panel of judges. 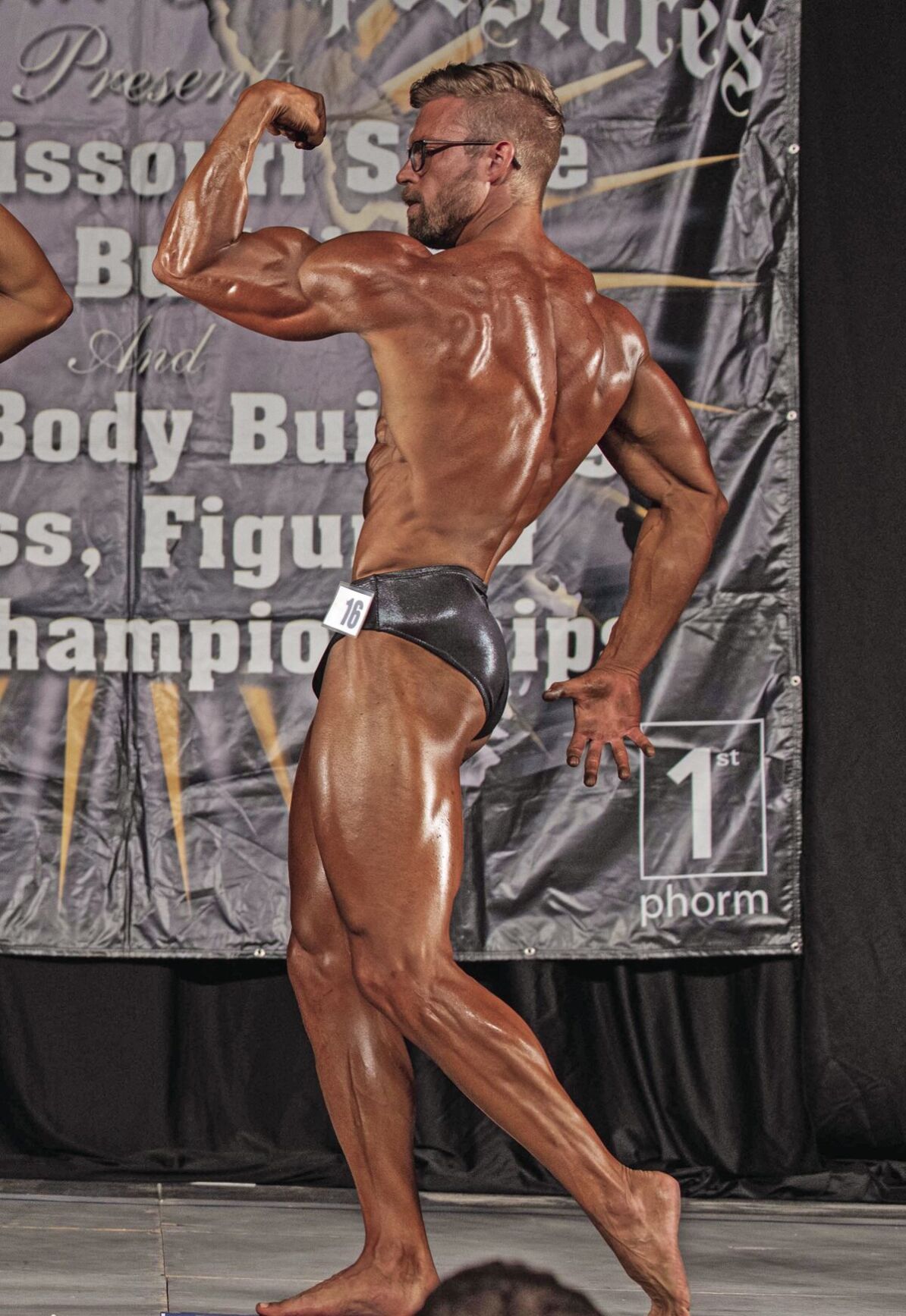 In the Classic Physique division, athletes choose one free pose, their “favorite classic pose” that best displays their individual physique. Athletes are judged on muscularity, leanness or "conditioning" and their symmetry and proportions, looking to combine all aspects to make the perfectly balanced physique. 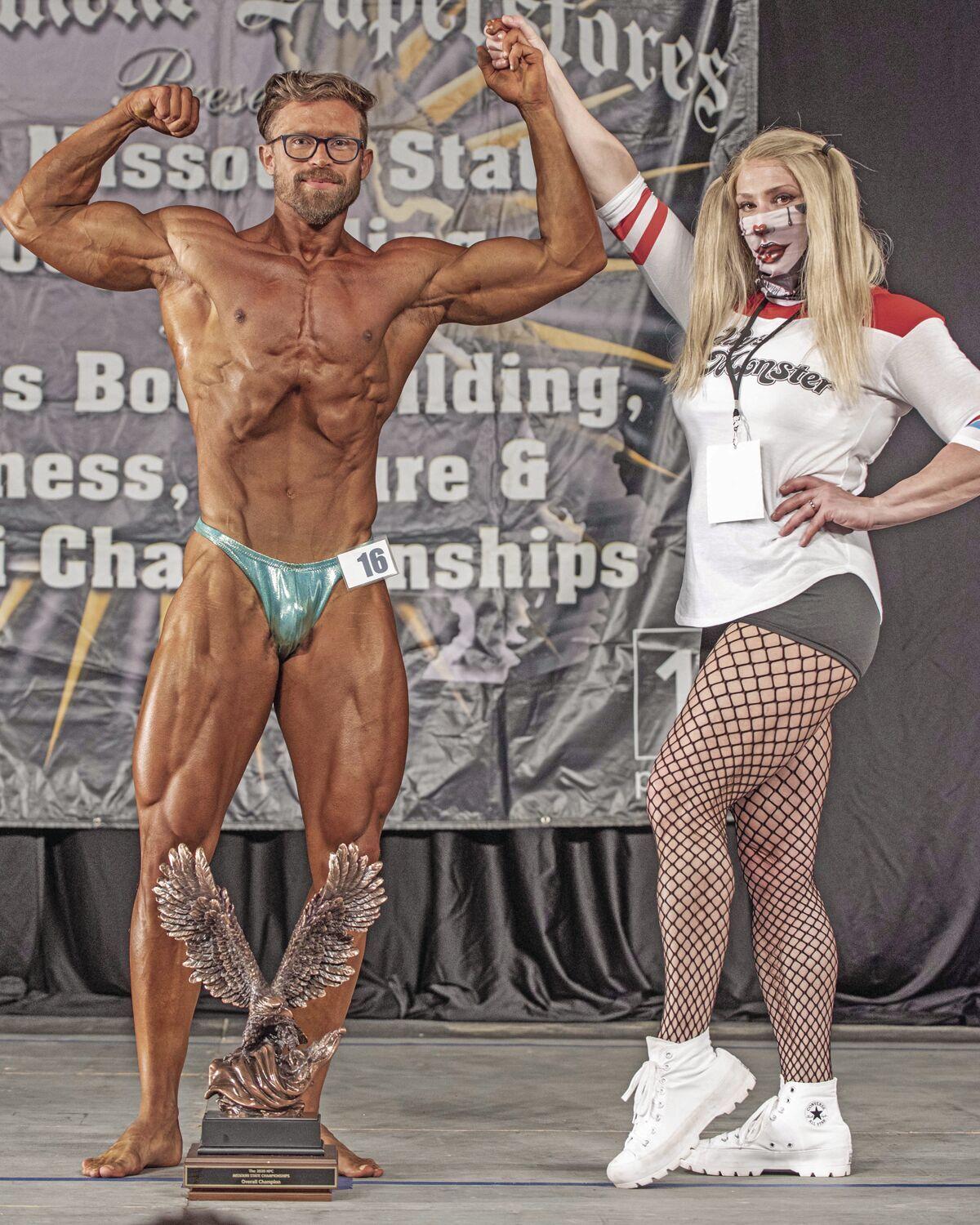 Will Kujawa poses for a photo after being named the Novice Overall Champion at the NPC Missouri State Championships in Springfield, Mo., on July 11. Follow Kujawa on Instagram @kujawawa for more bodybuilding photos and videos.

Will Kujawa hits the "side tricep" pose during pre-judging, where athletes are compared side-by-side in a variety of mandatory poses for a panel of judges.

In the Classic Physique division, athletes choose one free pose, their “favorite classic pose” that best displays their individual physique. Athletes are judged on muscularity, leanness or "conditioning" and their symmetry and proportions, looking to combine all aspects to make the perfectly balanced physique.

Will Kujawa poses for a photo after being named the Novice Overall Champion at the NPC Missouri State Championships in Springfield, Mo., on July 11. Follow Kujawa on Instagram @kujawawa for more bodybuilding photos and videos.

Will Kujawa is no stranger to winning awards.

However, he captured a different kind of prize on July 11, and it had nothing to do with his incredible work as the Claremore Daily Progress graphic designer.

Kujawa, an avid bodybuilder in his free time, was named the overall Novice champion of the 2020 National Physique Committee Missouri State Championships in Springfield, Mo., while also placing second in the Open Bodybuilding competition.

Novice is for any beginning competitor who has not previously placed in an open show. These contestants are judged on symmetry, proportion and definition.

“I was so nervous, and my heart was beating,” Kujawa said. “I could not relax. Stage presence is important, like being able to smile up there while you’re flexing is very difficult. I was making terrible faces the whole time because I was so nervous.

“You have to learn how to pose your body to hide your weaknesses and display your strengths.”

His nervousness was understandable.

It took six years of hard work and dedication to build the physique necessary to compete against his peers in the bodybuilding community, and the last thing he wanted to do was embarrass himself on stage while wearing nothing more than revealing posing trunks in front of a crowd of spectators that included his mother and girlfriend.

After all, overcoming negative self-conscious thoughts about his appearance was one of Kujawa’s main reasons for becoming a bodybuilder in the first place.

As a 26-year-old, he weighed only 130 pounds with a diet consisting primarily of Chick-fil-A and candy.

Those unhealthy habits, along with his desire to look his age, pushed him to make a major lifestyle change.

“I looked like a teenager, and I did not like that, so I was like, ‘I need to do something about this,’” Kujawa said. “I just wasn’t eating, and you could tell by how I looked. I looked so skinny. I was eating basically fast food and sometimes a homecooked meal if I was at home. Other than that, it was candy and fast food, but I wasn’t fat because I was eating it once a day.”

Getting back into shape wasn’t necessarily hard for Kujawa, though.

As a former Division I soccer player at the University of Central Arkansas in Conway, Ark., his body knew how to handle the challenges and stress of working out.

Kujawa tallied three goals and three assists in 16 games in his lone season with the Bears in 2006, helping UCA to a 6-8-2 record. He logged 10 starts and 852 minutes on the pitch overall before relinquishing his collegiate athletic career and transferring to Oklahoma State University to pursue a graphic design degree.

After 3-4 years of physical inactivity, Kujawa began kettlebell workouts in 2014 and joined Infinity Fit Club in Claremore about three months later. He played soccer recreationally on the side as well but ultimately gave it up for good in 2018 to exclusively focus on bodybuilding.

“I wasn’t sure if I was going to do competitions or not, but I kept getting hurt playing soccer, and I was old and getting worse,” Kujawa said. “I could get better at the bodybuilding, so I just did that.”

Wanting to increase his work capacity and conditioning, Kujawa hired Bryce Pacheco of Goreala Performance in Tulsa as his coach in February 2019.

Pacheco puts him on strict meal plans and training regimens, which can be adjusted based on changes in Kujawa’s appearance and physique from week to week.

The strength portion is rarely an issue. He works out at least five times a week and can bench five reps of 275 pounds and squat 405 pounds six times.

More often than not, Kujawa is instructed to eat more food. That is perhaps his biggest challenge.

His main diet consists of oatmeal, white and jasmine rice, potatoes, beef, chicken, protein powder, eggs and broccoli. He eats some combination of those ingredients three times a day.

The meals aren’t luxurious by any means, but they work great in helping Kujawa meet his weight goals. He has already reached his initial targets of 180 and 200 pounds, and he is now shooting for 220 pounds.

“It’s discipline over motivation,” Kujawa said. “A lot of days, you don’t want to do it. Eating the same thing every day gets easy, but eating the same meal for the third time in the same day, that’s when it gets hard. I already had this twice, so I don’t want it again. But I’ve found that it’s tasty, I can eat it every day and I like it. The challenge was finding a way to cook it to where it tastes good and I don’t mind eating it.

Of course, there are some cheat days built into the schedule so Kujawa can indulge in the plethora of fast-food options that non-body builders enjoy.

Two times a week, he treats himself to a giant cheeseburger from either Ron’s Hamburgers & Chili, Boomerang or Sonic.

However, those options are eradicated when his diet cuts his calorie intake to 2,600 five weeks before competition.

Family gatherings, unfortunately, become a tad more laborious at that time. Kujawa learned that the hard way during a recent visit from loved ones.

“Most people diet for 14 weeks, but I didn’t really have to cut my food back super bad until like five weeks,” Kujawa said. “I stay lean, luckily. The last three or four weeks got really bad; it was really challenging. I’m still eating, so I’m not starving myself, but everything is so regimented. You can’t have anything that’s not on your plan. My family came into town, and they had Andolini’s Pizza, carrot cake and all this stuff, and I’m eating my chicken and rice meals while they’re all enjoying themselves.

“It’s mentally draining, and it puts you in a cranky bad mood without even realizing it.”

There were no signs of crankiness, though, when the master of ceremonies suspensefully announced the winner of last Saturday’s competition.

The hardware collected from his victory made all the trials worth it, but he isn’t satisfied just yet.

There are still goals to achieve and challenges ahead, and he won’t stop bodybuilding competitively any time soon.