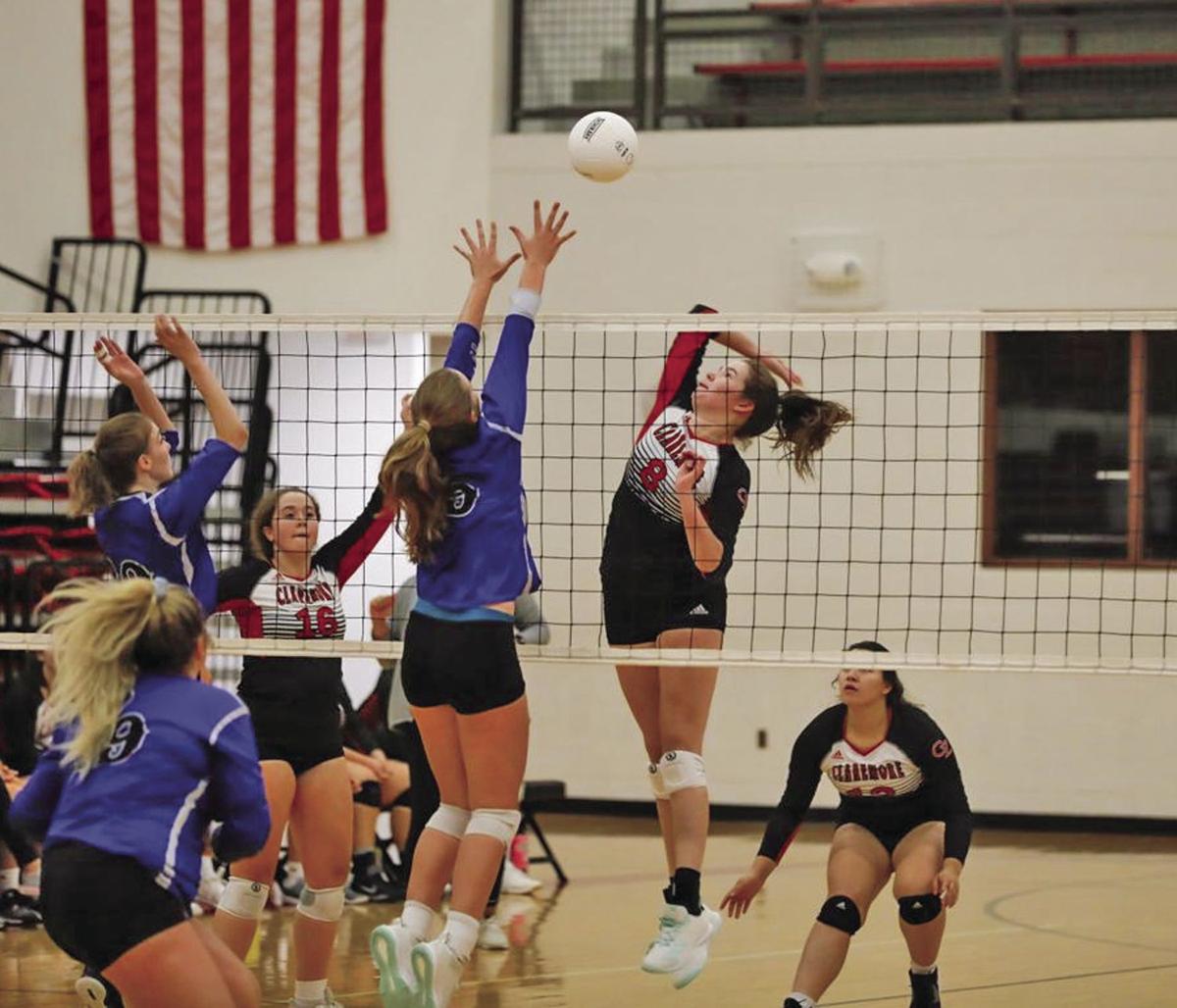 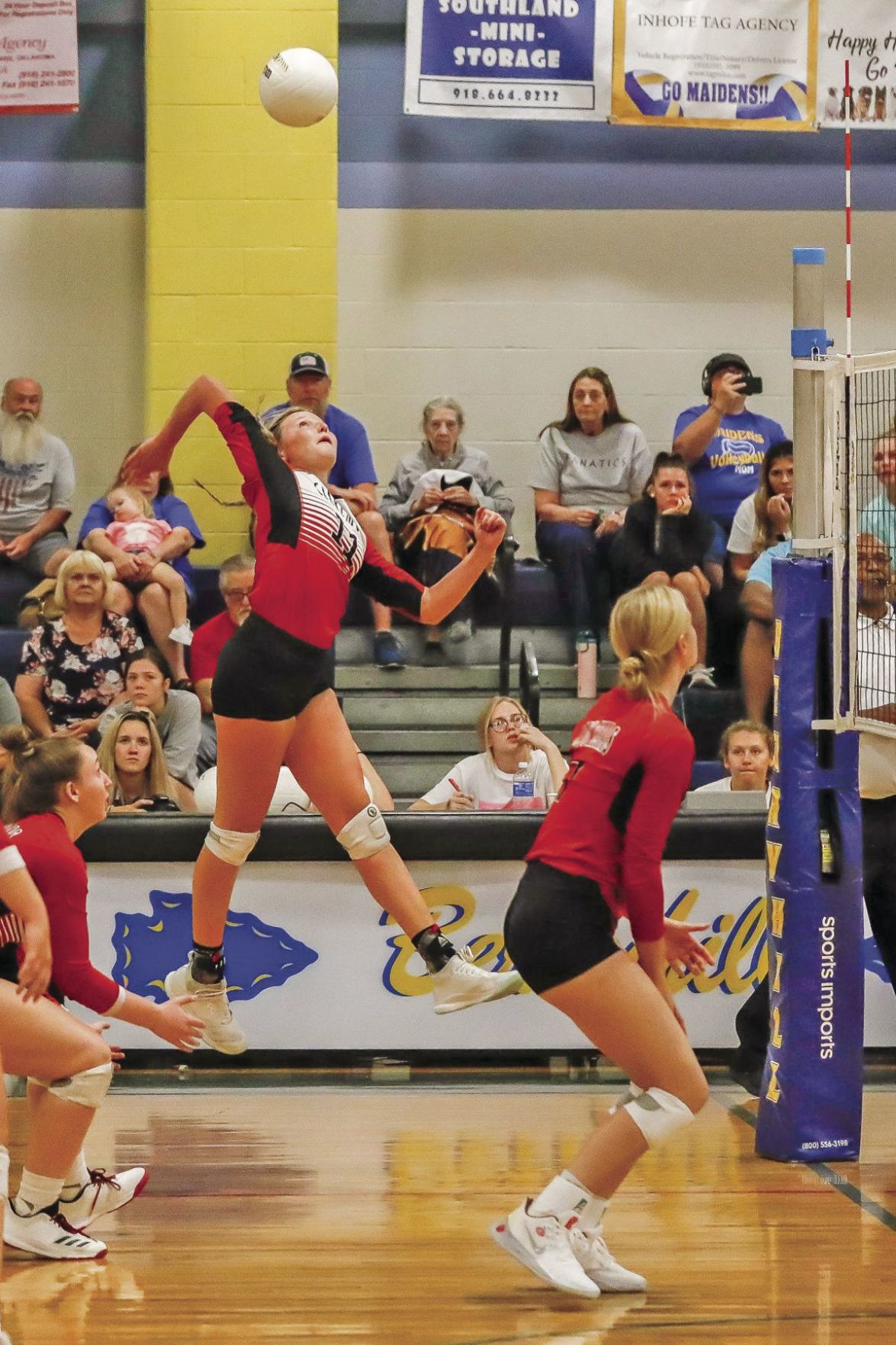 “Losing the third set gave us a lot of adrenaline to come out in the fourth set and take it,” Jones said.

Claremore (22-9) cruised to victories in the first two sets and appeared to be on track for a sweep after garnering a 5-1 advantage in the third, but the Lady Titans weren’t quite ready to surrender.

Lady Zebras coach Victoria Giron acknowledged the Lady Titans’ aggressiveness in the third set, and she was admittedly concerned about her team’s psyching heading into the fourth.

“I just wanted to make sure our girls rose to the occasion and didn’t falter because they’ve been doing that a little bit lately,” Giron said. “We get a little bit of pressure and get inside our heads and get mental.”

Despite the setback, Claremore — sparked by two kills and an ace from Hardage and Jones — managed to close the set on a 6-2 run to gain some momentum back heading into the next set.

Carl Albert again overcame an early deficit to take the lead in the fourth, but the Lady Zebras didn’t fold as easily this time.

After an ace from Lady Titan server Willow Roe gave Carl Albert a 9-7 advantage, Claremore rallied to retake the lead at 12-11 following kills from Jones and Hardage and three CA errors.

The teams went on to trade four more leads, but Hardage made sure the final switch would end in the Lady Zebras’ favor.

With the scored tied at 15, Hardage tallied four of the next eight points on her own with three kills and an ace to give Claremore the lead for good.

Jones notched a kill as well during the 7-1 run.

Alexander and Boyer tried to ignite another Lady Titans push, but Hailey Grant and Kinley Williams closed out the victory with a pair of kills.

“We came out focused from the first set, and the third set was like a fluke,” Hardage said. “That fourth set, we were ready to come back out and be strong. I was ready to put down whatever Riley (Renfroe) set for me.

“The adrenaline kicked in, and it was rapid fire.”

Hardage and Jones also teamed up in the first set, recording four of Claremore’s final five points in a 25-16 win.

Three of those points came via kills from Jones.

In all, Hardage finished with 15 kills, two aces, five blocks and three digs, while Jones had 14 kills, one block and 11 digs.

“Brooke Jones is a huge leader on the court, and everybody looks to her,” Giron said. “Maddie is our security blanket, and people feel a lot more comfortable on the court when she’s out there because she has such a huge presence.”

Becca Hilmes finished with one ace and 16 digs, and Renfroe tallied one ace, three blocks and 35 assists.

“We have been having a lack in the season lately, and I think this win boosted our confidence going into the playoffs,” Jones said.

The win was momentous not only because it was the Lady Zebras’ sixth win over a top-10 team, but also because there are several teams jockeying for position in the rankings.

Only the top eight squads host a regional, so closing out the regular season in strong fashion is essential.

Claremore currently sits at No. 5 in Class 5A. The finals rankings for regional pairings will be released on Monday, Oct. 7, at OSSAARankings.com

“If we lost, there was a good chance we’d drop in the rankings,” Giron said. “We’re trying to stay in the top five for as long as we can. I think we’re going to have it in the bag.”

The Lady Zebras are looking to reach their third-straight Class 5A state tournament.

They have been eliminated in the first round by Bishop McGuinness the past two years, but Giron said she thinks this team featuring nine seniors has a chance to make a deep run this postseason.

“The difference between this team and a couple of teams we’ve had is this team has heart,” Giron said. “We definitely had a lot of talent last year, but this year’s seniors have really stepped up to lead the team, and that is the difference.”