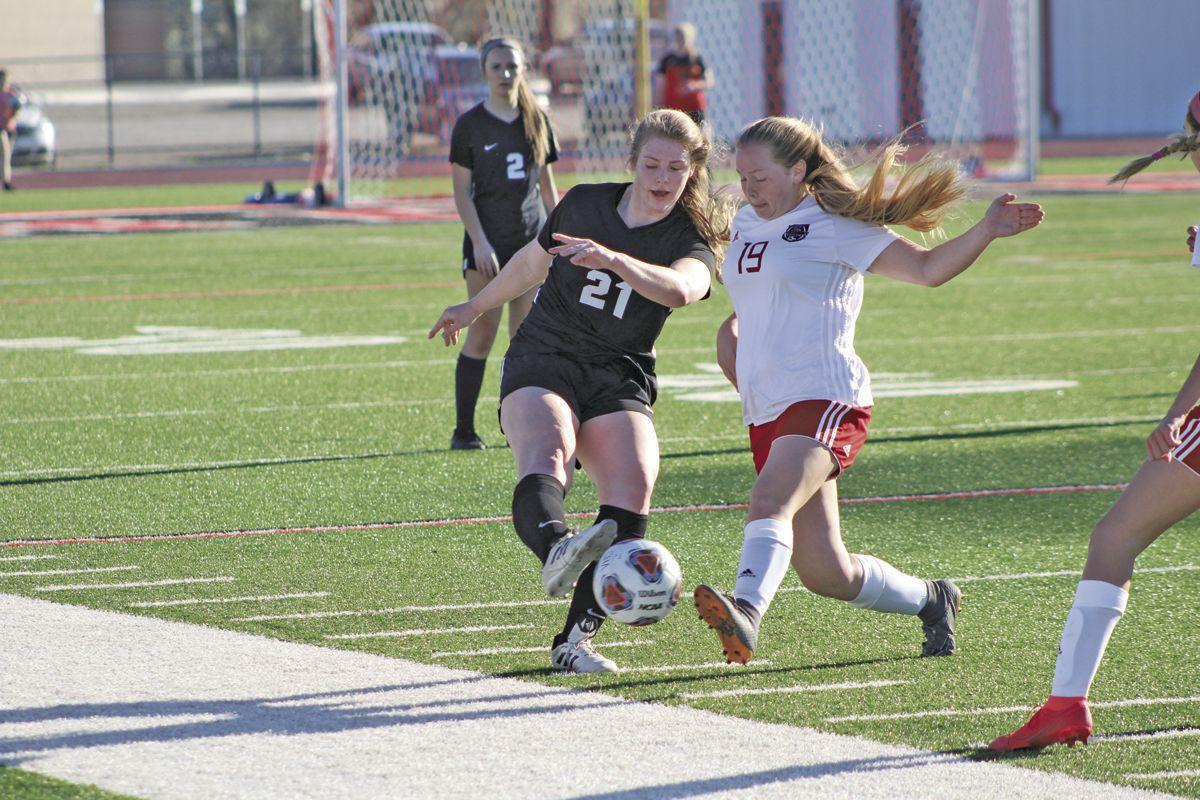 Verdigris junior Lexy Borgstadt (21) looks to zip a pass by Fort Gibson senior McKenna Cantrell (19) during the first half of Tuesday’s season opener. Borgstadt was one of nine basketball players playing their first soccer of the year, practice included. 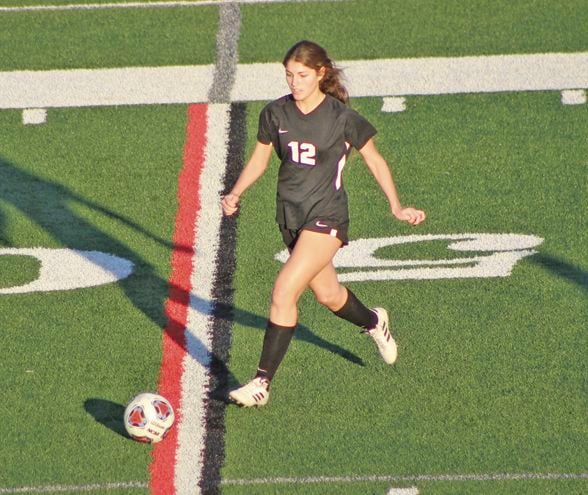 Verdigris senior Megan Turner looks to make a pass after corralling a loose ball during the second half. Turner scored the only goal, leading the Lady Cardinals to a 1-0 win.

Verdigris junior Lexy Borgstadt (21) looks to zip a pass by Fort Gibson senior McKenna Cantrell (19) during the first half of Tuesday’s season opener. Borgstadt was one of nine basketball players playing their first soccer of the year, practice included.

Verdigris senior Megan Turner looks to make a pass after corralling a loose ball during the second half. Turner scored the only goal, leading the Lady Cardinals to a 1-0 win.

VERDIGRIS — What does the ideal first day of soccer look like? Megan Turner probably has a fairly good idea.

Less than a week removed from the end of basketball season, the Verdigris senior once again found herself in the athletic spotlight, scoring a goal within the first 10 minutes to lead the Lady Cardinals to a 1-0 season-opening victory over Fort Gibson at Cardinal Stadium on Tuesday night.

It was a rematch of last year’s Class 4A state quarterfinals, which Verdigris won 2-1. The Lady Cardinals (1-0) are competing in Class 3A this season. Fort Gibson, which remains in Class 4A, dropped to 3-2 with the loss.

Turner’s left-footed shot, assisted by junior Lauren Bulcroft, ricocheted off the goalkeeper and into the net for the only goal of the game.

“Lauren fed me a really good ball, and I scored,” Turner said. “It was really important because the first win of the season is always good.”

For Turner, it was not only her first action on the pitch this season, but it was also her first time playing forward. She spent most of her time as a midfielder before making the switch this season.

Aubrey Lechlider, who tallied 107 goals and 40 assists with Verdigris and now plays for the University of Tulsa, manned the position in recent years. She led the Lady Cardinals to a state title in 2018 and runner-up finishes in 2016 and 2019.

Those are big shoes to fill, but Verdigris coach Stacia Risenhoover said she believes Turner will grow into the position as the season progresses.

“Meg has not ever really played forward for us,” Risenhoover said. “With Lechlider graduating, I think if I get Meg in there and get her comfortable, she can work that area really well.”

Eight other basketball players, including household names Lexy Borgstadt, Kayla Darden and Kylee McGuire, made their soccer debut Tuesday, which Risenhoover said made the rotations a little shaky and unorganized at times.

Playing hard seemed to remedy those small mishaps for the most part, though.

“I’m thankful they did that, but we’ve got a little bit of work to do,” Risenhoover said. “I wish we could’ve continued to push forward and maybe got another one or two (goals), but getting that first one did allow the girls to kind of relax a little bit. We haven’t had our basketball players very long, so they were a little rusty, but that’s very well expected; this was their first day out.

“We’ll just be a well-rounded team, and I look forward to seeing what these girls have in store for the rest of the year.”

The boys had a much harder time in the nightcap.

Jose Estrada gave Fort Gibson the lead less than four minutes into the game, and the Tigers cruised from there for a 4-0 win.

Cayden Cooper and Conner Loepp added goals at the 29:59 and 1:49 marks of the first half, respectively, giving Fort Gibson a three-goal advantage after 40 minutes.

The Cardinals, led by new coach Caleb Horton, are now 0-2 and have yet to score a goal. They lost a 3-0 decision at East Central in the season opener Friday.

With Spring Break next week, neither Verdigris team plays again until Monday, March 23, at Rogers County foe Oologah. Girls are set to kick off at 5:30 p.m., followed by the boys at 7:30 p.m.