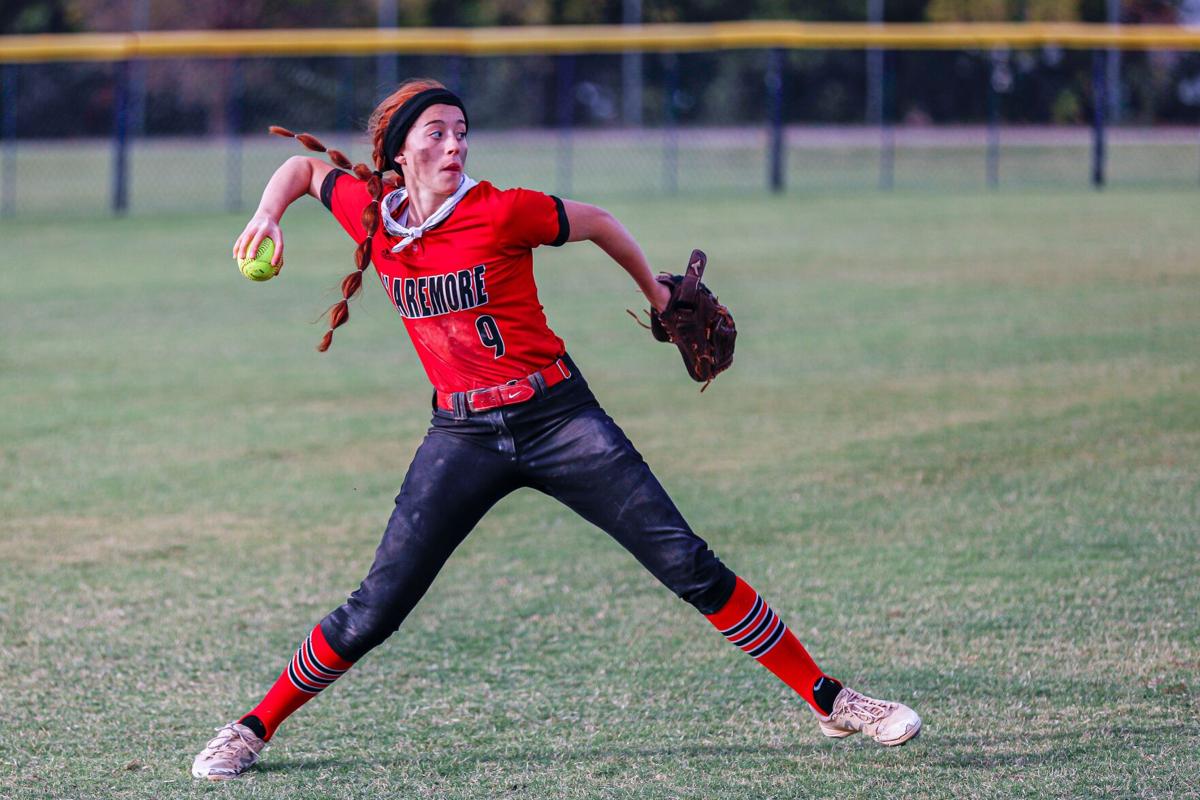 Claremore's Abbey Hagen looks to throw the ball to first base for an out after fielding a hit during Thursday's Class 5A state quarterfinals against Tahlequah. 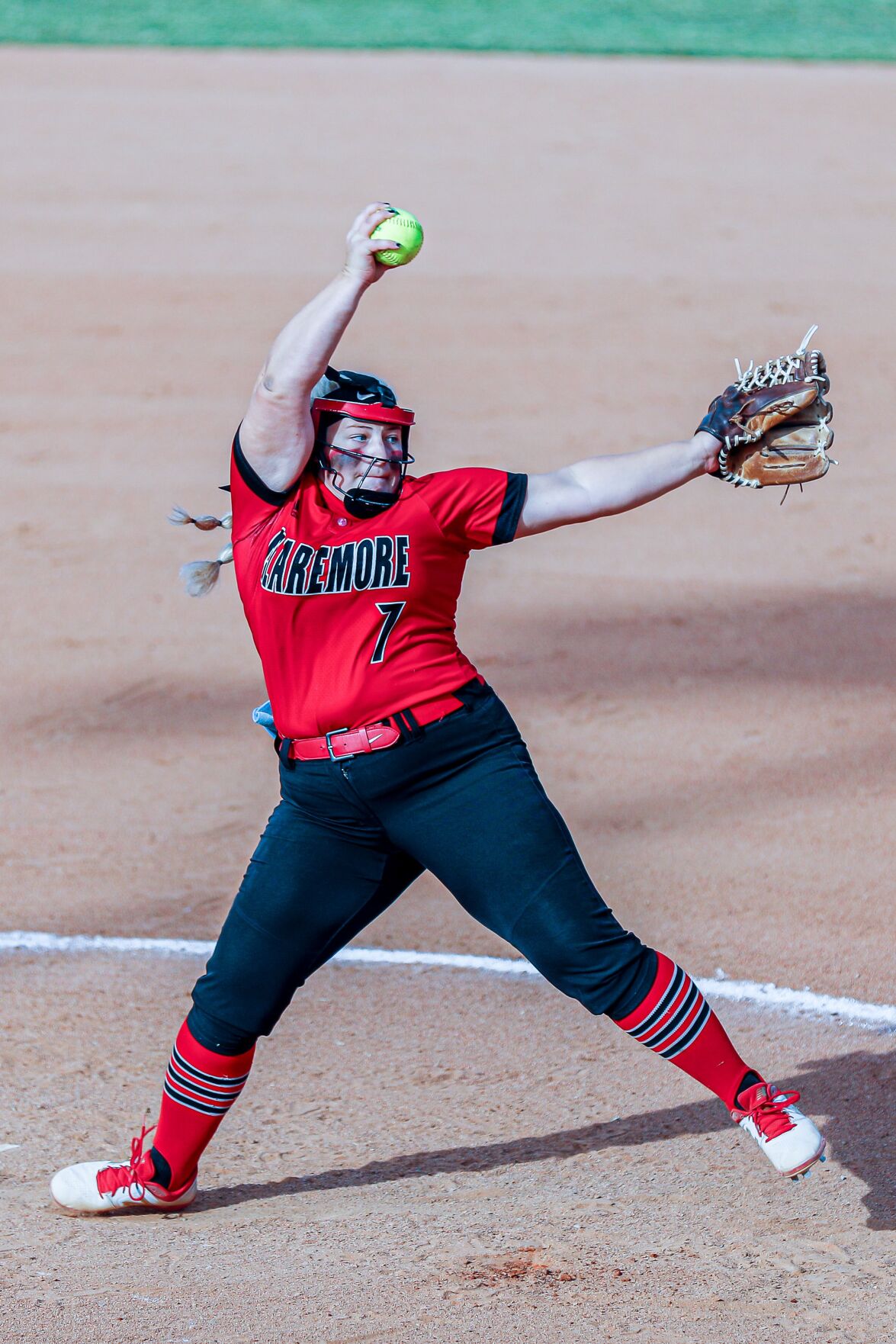 Claremore's Abbey Hagen looks to throw the ball to first base for an out after fielding a hit during Thursday's Class 5A state quarterfinals against Tahlequah.

The Claremore senior pitcher had given up seven hits through six innings, but those resulted in only one run. Thanks to her and the defense, as well as an RBI single from Emily Rogers in the fourth, the third-ranked Lady Zebras were all but an inning away from possibly securing a berth to the Class 5A state championship game.

Unfortunately for Poorboy and Claremore, Carl Albert waited until the last moment to find some offensive momentum.

The No. 2 Lady Titans exploded for four runs on five hits – including three-consecutive doubles – to clinch a 5-1 victory over the Lady Zebras in the Class 5A state semifinals Friday afternoon at Field 3 of USA Softball Hall of Fame Stadium in Oklahoma City. Carl Albert plays No. 1 Coweta for the title at 2:30 p.m. Saturday in what will be its fourth-consecutive championship game appearance.

“We definitely fought our hardest, and even though it didn’t come out our way, we definitely put everything we had out on the field,” Poorboy said. “It sucks because I know these girls wanted it as bad as I wanted it. It’s hard, but it just wasn’t our year, and I understand that.”

Things began unravelling for Claremore when Abbey Rogers drove in Alexis Williams and Aerin Talley with an RBI double to right field, giving the Lady Titans a 3-1 lead. Williams and Talley had opened the inning with a pair of singles.

Nia Long and Marissa Frolich followed with doubles of their own to left field, with the latter scoring Rogers and Kyla Davenport to make it a four-run spread.

Poorboy managed to stop the damage there, but the psychological warfare in her mind had already taken its toll.

“It got very stressful,” said Poorboy, who surrendered 12 hits and a walk with one strikeout on 90 pitches. “I could tell that every pitch would determine if they were going to score another run or not. I got tight in my head, and things got harder mentally.”

Poorboy had a chance at the plate in the bottom half after Julia Hoffman lined out to the third baseman, but she popped out to the catcher. Frolich, who allowed five hits and no walks on 83 pitches, then tallied her sixth strikeout to close out the Carl Albert victory.

Before the Lady Titans pulled away, it looked as if Claremore might be the first to strike a decisive blow.

Paiten Reavis and Jadyn Muns led off the bottom of the sixth with a pair of singles to put the Lady Zebras in scoring position, but the hits didn’t amount to anything. A groundout, followed by a strikeout and a pop out, dashed the promising opportunity.

“That’s the opportunity we kind of squandered away,” Coyle said. “You can’t let those opportunities get away from you and expect for the other team not to respond and kind of take that as a momentum shift because it definitely was.”

Bryce Atkins put Carl Albert on the board first in the second when she doubled in Ausha Moore, but Rogers’ single in the fourth tied the score at 1.

Talley nearly registered a solo home run in the first, but it bounced off the top of the wall and back into play. Claremore took advantage of that lucky bounce and retired the side without surrendering a run.

With the loss, the Lady Zebras finished the season with a 23-14 record, winning 12 of their final 14 games. Among the year’s accomplishments was the program’s first regional championship since 2013, which was also when it last won a state tournament game.

Although Claremore softball won’t be a state champion in 2020, it was certainly a year in the making.

“If you’re just looking at that game, we missed an opportunity, and that’s disappointing,” Coyle said. “We had our opportunities and didn’t capitalize when we needed to. But they’ve got nothing to hang their head about. We had an awesome season. Record wise, district-finish wise and regional-finish wise, we kind of stacked up some things we haven’t done in a long time. I’m proud of them for having a great experience.

“They could’ve easily just showed up and went through the motions and been happy to be here, but instead we came out and took care of Tahlequah and then played really well with Carl Albert up until that seventh inning.”