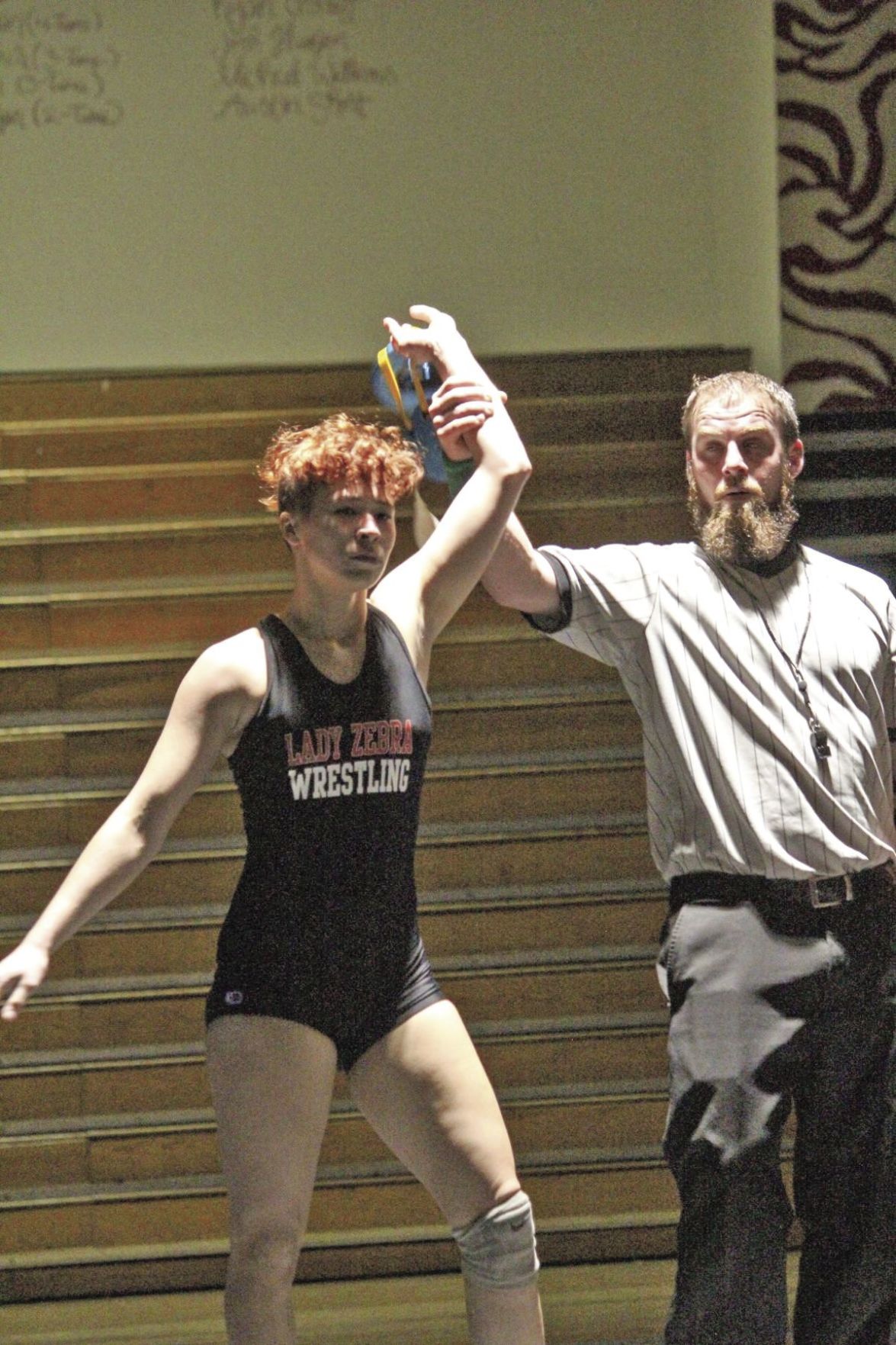 Claremore junior Kearanie Johnson has her arm raised after winning a match during the first all-girls wrestling dual in Oklahoma history on Dec. 6. She is by far the most

experienced Lady Zebra, and she has inspired many of her teammates this season. 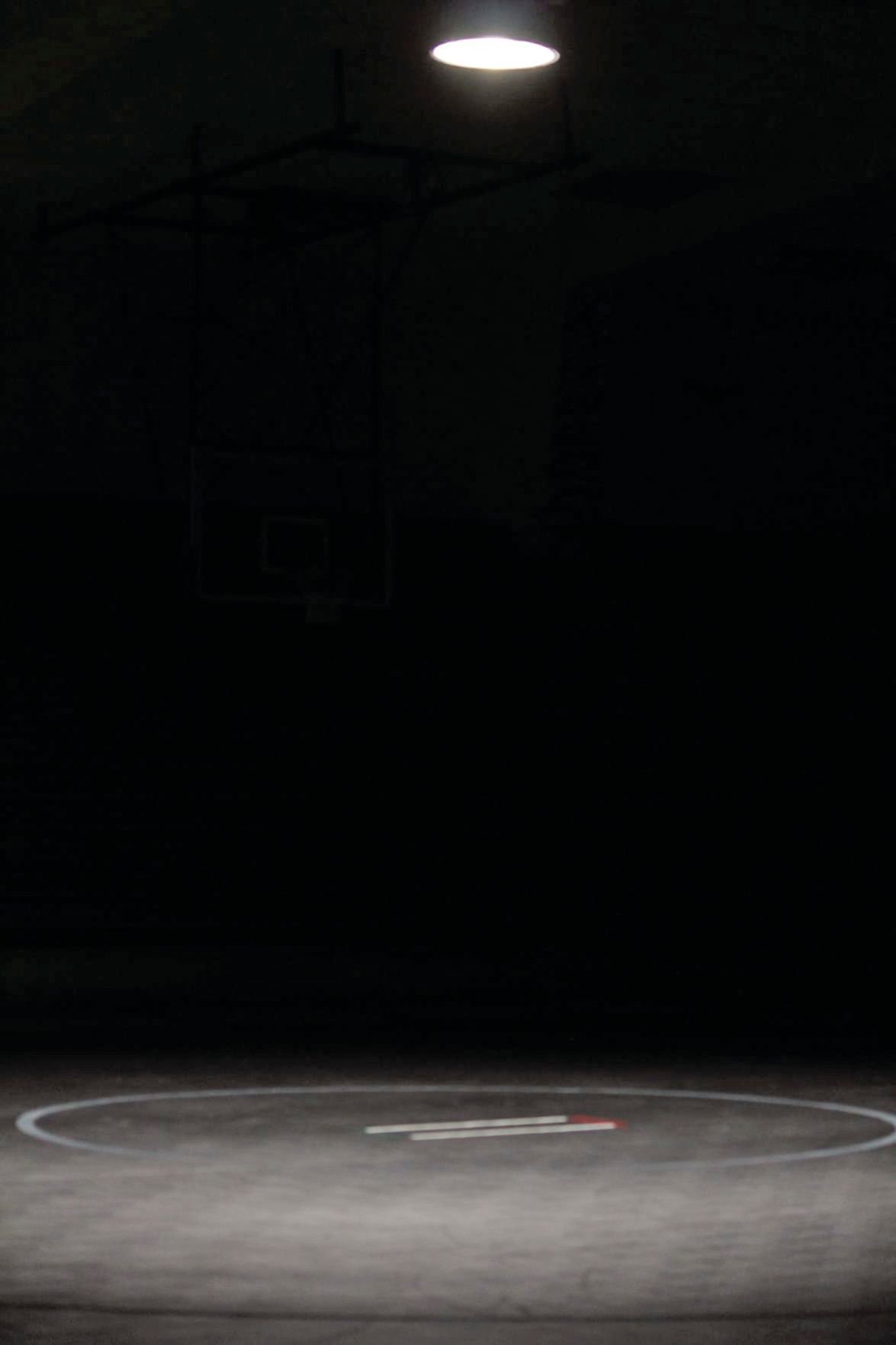 It is a tradition only Claremore high school wrestlers get to experience. At every home match, all lights in Frank Mobra Gymnasium are shut off except for a single spotlight over the wrestling mat. On Dec. 6, two teams of all girls (Claremore and Broken Arrow) experienced the sensation for the first time.

Claremore junior Kearanie Johnson has her arm raised after winning a match during the first all-girls wrestling dual in Oklahoma history on Dec. 6. She is by far the most

experienced Lady Zebra, and she has inspired many of her teammates this season.

It is a tradition only Claremore high school wrestlers get to experience. At every home match, all lights in Frank Mobra Gymnasium are shut off except for a single spotlight over the wrestling mat. On Dec. 6, two teams of all girls (Claremore and Broken Arrow) experienced the sensation for the first time.

Editor’s note: This is Part 2 of a series chronicling the first all-girls wrestling dual in Oklahoma history. Part 3 will continue looking at the wrestlers’ experiences from the contest and the events leading up to it.

Claremore ensured that on a spotlit mat inside the Frank Mobra Gymnasium on Dec. 6. Alongside Broken Arrow, the Zebras made state history.

Breaking decades of barriers is no easy task, though. It took the bravery of girls who dared to be different.

Wrestling can be a terrifying activity for girls with no experience, but Claremore girls wrestling coach Crystal Klaver said they have handled the journey with grace.

“Most of the girls are embarking on something completely new,” Klaver said. “But they are tough and practice hard. They get hurt, but they don’t complain, and they don’t whine. They push through; they are fighters. I’m so proud to watch them do this.”

Adjusting to wrestling attire was another obstacle the Lady Zebras had to overcome.

Although a seemingly small task compared to learning the ropes of wrestling, many of the girls’ reservations about the sport started with the singlet. Spandex onesies aren’t exactly popular among the female population.

Claremore senior wrestler Barbara Bacon was among those who vehemently disliked the idea of donning such an outfit.

“(Klaver) was like, ‘Are you going to wrestle with us next year?’, and I was like, ‘Heck no. I am not doing that. I am not wearing a singlet,’” Bacon said.

They can be an uncomfortable garment to wear, and the tightness in some areas can limit flexibility. Not to mention they are usually lacking in modesty.

“It takes an unbelievable amount of courage to put on a singlet and expose yourself to your peers and get out on the mat in front of your teachers and your friends,” Willard said. “Especially for a high school girl who has never done it before; they’re not the prettiest things to wear sometimes.”

Of course, the integration of a girls wrestling program wasn’t a seamless transition for Willard and his staff at first, either.

Having coached boys for years and years, he wasn’t sure how to handle girls in terms of disciplining and planning a workout regime.

Society says girls should be treated more delicately than boys, but the Lady Zebras made sure that notion was swiftly nullified in the wrestling room.

“It was hard for the coaches to be as hard on them,” Willard said. “But a few of the girls came to me with a complaint and said, ‘We want to be treated the same way, no matter what.’ From that day forward, that’s how I treat them. I scream at them, and I tell them to pick it up if they’re being lazy.

“I cut them no slack, and they’ve responded very, very well to it.”

That mentality has forged a group of unwavering female athletes, and each has a unique story about the positive influence wrestling has on their lives.

Johnson, a junior, has been wrestling since she was 4 years old.

How does a 4-year-old girl get into wrestling of all things? For Johnson, the answer is simple. Wrestling runs in the family.

Her father, Anthony Johnson, wrestled at Webster. Jerome Townsell, one of her two brothers, was a three-time state champion for Edison.

“I was always involved in everything rough that you could imagine,” Kearanie Johnson said. “One day during my brothers’ football practice, my dad took me to the wrestling room, and I immediately fell in love with it that day.”

Growing up with two older brothers, Kearanie Johnson had no choice but to be tough. And whatever they did, she did.

She showed early on that she wasn’t going to let gender differences hinder her in any way.

Tough doesn’t even begin to describe Kearanie Johnson. She has transcended to another level of female empowerment, inspiring others in the process.

“I really didn’t see any difference between me and my brothers besides our age,” Kearanie Johnson said. “I didn’t really get a choice to be tough and strong like them. I always wanted to be the tough and strong one in the room.

“I’ve always been the leader in the room because I’ve never before had another girl in the room with me except for maybe twice in my life. It feels good to have people in there like me who have the same passions as me.”

Even when she has her moments of doubt and wonders why she continues to wrestle after all these years, something always pulls her back.

Among those keeping her grounded and humble is her father.

Kearanie Johnson said she has given up on herself many times, but Anthony Johnson is always there to provide encouragement and promote confidence.

In some ways, he is the Rocky Balboa to her Robert Balboa, Jr.

“There’s been a lot of times where I’ve just given up on myself, and the only one there for me is my dad,” Kearanie Johnson said. “He was always my coach, so any time I need him for that support, especially mentally, he’s there for me to tell me, ‘Being a girl has never stopped you before, why would it stop you now?’”

She didn’t know it yet, but she would soon be learning some of those techniques herself.

When she heard about the coming girls program, she toyed with the idea of joining the team and putting herself in Guinn’s shoes.

“I would jokingly be like, ‘Yeah, I’m going to join that,’” Kroeker said.

Guinn, who wrestles 182 for Claremore, was supportive but skeptical.

Coach Willard was hesitant as well, even telling Kroeker just weeks before the historic all-girls dual that he initially believed she wouldn’t last two weeks in the wrestling room.

She proved him wrong, though, lasting much longer than he anticipated. Her self-proclaimed stubbornness was the guiding force that helped her exceed low expectations.

However, the biggest obstacle between her and wrestling history might’ve been her father.

He strongly opposed the idea, and it wasn’t the first time wrestling became somewhat of an issue between the two.

He had already made her discontinue wrestling when she was younger because “it was for boys.” Being so young at the time, Kroeker’s only option was to collaborate with his wishes.

He voiced some of the same concerns again in 2019, but not even his disapproval could deter her objective.

She put that stubbornness to good use.

“Whenever he told me no, that sealed it,” Kroeker said. “I had to wrestle after that. He said, ‘If you practice in the same room as the boys, you can’t do it.’ I said, ‘How is that any different than me wrestling with my brother? Why should it matter?’

“Eventually it just took me doing it, and he was going to have to accept that.”

Luckily for Kroeker, it was only a matter of time until her father warmed up to her wrestling exploits.

He attended Oklahoma’s first all-girls wrestling dual on Dec. 6, and though she lost both her matches, Kroeker said she detected a glimmer of pride welling from within him.

“He’s proud of me for doing it,” Kroeker said. “He’s gotten over it, and after he’s gotten to watch me wrestle, I think he’s grown to like seeing me get the satisfaction of winning. I think he realized that even if I’m going to lose, I’m still going to be here.

“(Dec. 6) taught me one of the biggest lessons in wrestling, which is humility. I got my a-- beat, but he was supportive.”