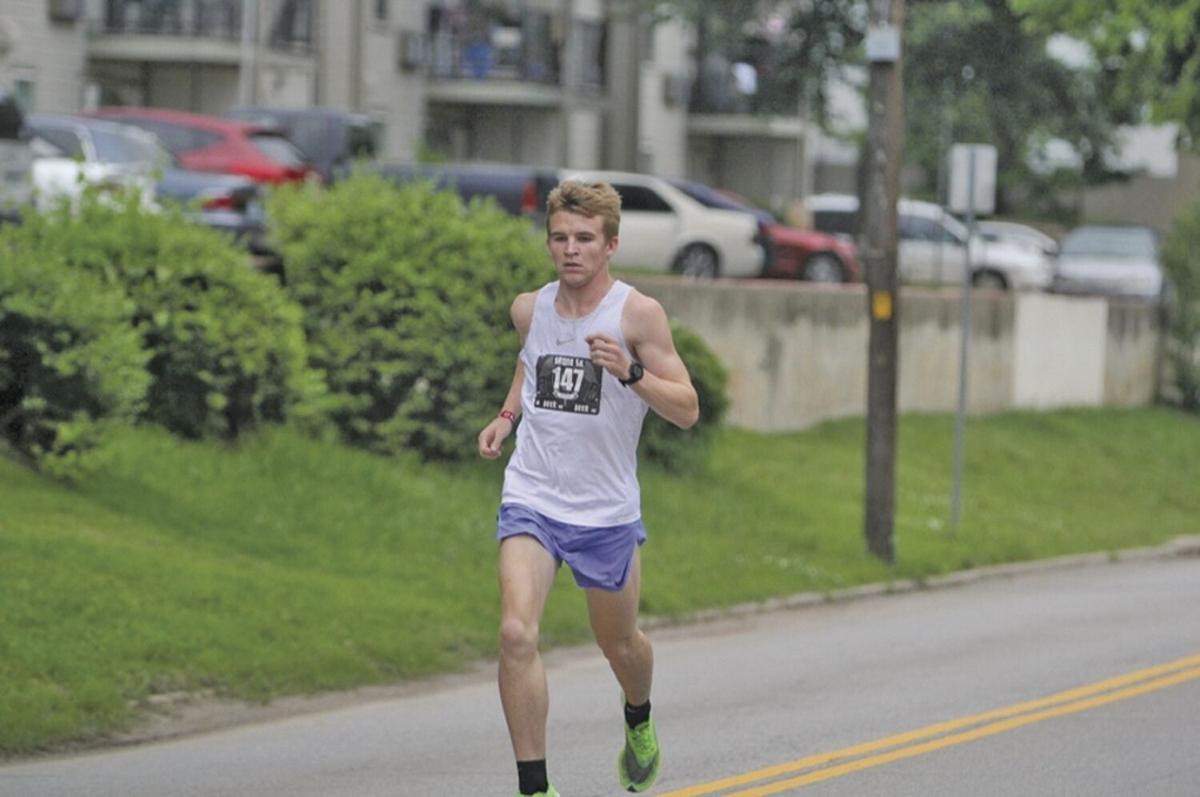 Nick Williams, a recent Rogers State graduate, paces himself near the 2-mile mark of the 9Run8 5K on Friday night in Tulsa. Williams, who ran cross-country and track for the Hillcats, won the race in 15 minutes, 10 seconds. 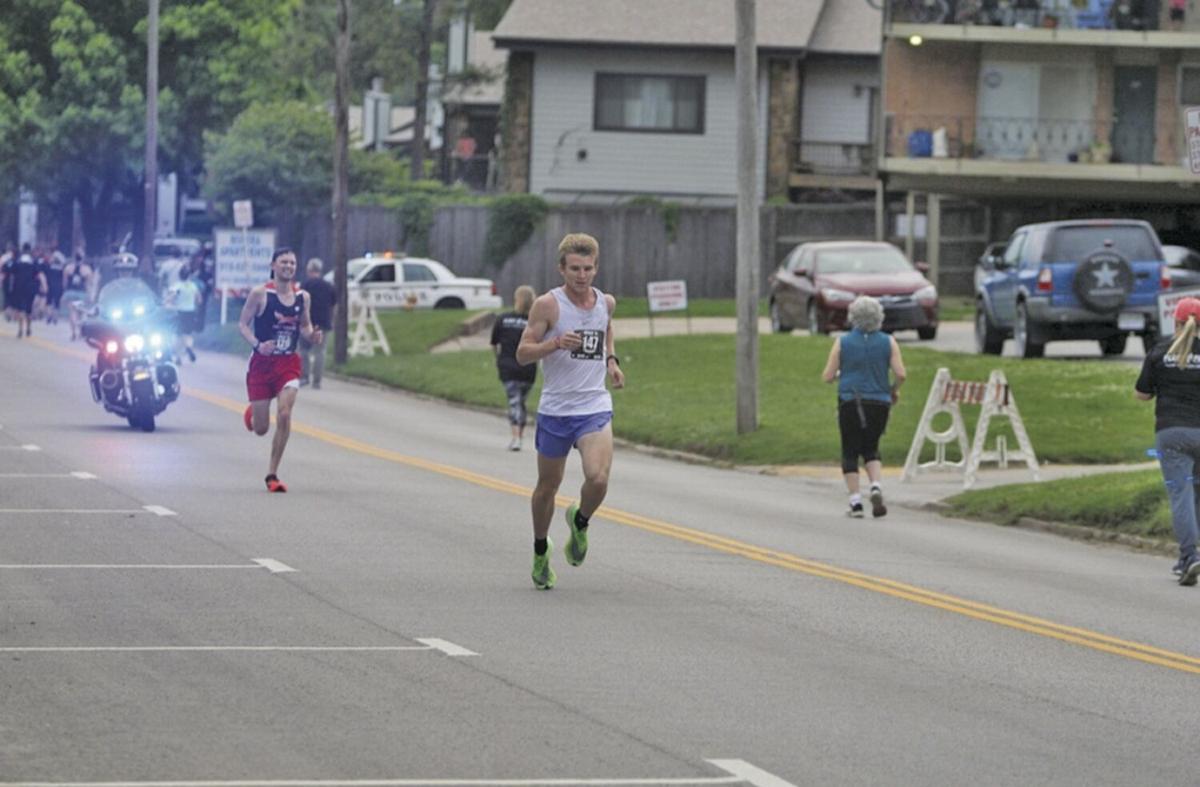 Nick Williams, right, pulls away from Ben Anderson during the Fleet Feet Tulsa 9Run8 5K race on Friday night in Tulsa. Williams won the race with a time of 15 minutes, 10 seconds while Anderson clocked in at 15:24 for second place.

Nick Williams, a recent Rogers State graduate, paces himself near the 2-mile mark of the 9Run8 5K on Friday night in Tulsa. Williams, who ran cross-country and track for the Hillcats, won the race in 15 minutes, 10 seconds.

Nick Williams, right, pulls away from Ben Anderson during the Fleet Feet Tulsa 9Run8 5K race on Friday night in Tulsa. Williams won the race with a time of 15 minutes, 10 seconds while Anderson clocked in at 15:24 for second place.

TULSA – Nick Williams has run in many competitive races over the years as a collegiate athlete, but none of them featured a faster start than the Fleet Feet Tulsa 9Run8 5K.

The race, which started and finished at Veterans Park on the southside of downtown Tulsa, promoted itself as having a “fast course perfect for that PR”, and that certainly proved to be true for the recent Rogers State University graduate.

Thanks to a fast start, Williams placed first of 543 runners while logging a personal best for a 5K road race with a time of 15 minutes, 10 seconds – a 4:53 per mile pace.

Of course, his competition had something to do with that performance as well.

Williams ran the opening mile in 4 minutes, 32 seconds – the fastest start of his career in a 5K – but even that blistering time wasn’t enough to snag the lead from an ambitious Ben Anderson, a 26-year-old from Oklahoma City.

It wasn’t until the second half of the course on a downhill portion of Riverside Drive that he was finally able to overtake the former University of Iowa runner.

“These Tulsa 5Ks, you never know what’s going to happen until the race starts,” said Williams, whose best time at that distance on the track is 14:54, which he registered at the MIAA Outdoor Track & Field Championship on Sunday, May 9 in Pittsburg, Kan. “We took the first mile out in like 4:32, which I did not imagine was going to happen. I didn’t take the lead until 2 miles, and at 2 miles I was at 9:30. Once I made the move, I just made a really, really hard pass. I really felt the wind pretty bad, so things kind of died down and slowed down because I thought we were going to go under 15 minutes based on where I was at 2 miles. I was pretty tired, but I just tried to continue to make the gap.

He managed to maintain his lead and outkick Anderson down the final stretch along Boulder Park Drive going into Veterans Park to claim the win. Anderson wasn’t far behind, clocking in at 15:24 for second place.

The race also served as a redemption of sorts for the 22-year-old, whose collegiate career with Rogers State came to an end a week earlier in Naperville, Ill., at the Dr. Keeler Invitational.

Williams failed to qualify for the Division II national meet in the 3,000-meter steeplechase, his specialty race, so he had every intention of taking out his frustration on the pavement in Tulsa.

“Last week was a last-chance meet to try to qualify for nationals,” Williams said. “At the conference meet, I was .02 seconds off a provisional mark for nationals in the 3,000-meter steeplechase. That doesn’t mean I would’ve made nationals; it probably would’ve taken under nine minutes. I ran 9:13 at conference and was going to go into the next week just trying to run under nine to give myself the best chance possible. We went to a D-III meet in Naperville, Ill., and I was on pace through about 2K, but it slowed after that and it just didn’t happen. I ran 9:14, which is still a good time, but it just sucks that your career is over after that.”

Although his time as a collegiate has come to an end, his running career will live on.

Williams now plans to take some time off to rest and reflect on a successful senior season, which included capturing the 10K school record (31:28), lowering his school record in the 3,000-meter steeplechase twice and running two personal bests in the 5K.

He does, however, already have his eyes on another race that is coming later this summer on Aug. 14.

The Riverside 5000, hosted by Tulsa Runner, has a race specifically for elites, and Williams more than qualifies under the sub-17-minute 5K time requirement for entry. Women must be under 20 minutes.

He is also eligible for the prize money that comes along with it now that he is no longer a Hillcat.

“Now that I’m out of collegiate status, I can finally accept money,” Williams said. “I don’t know what the prize money is, but that would be awesome.”

He may not have a team around pushing him anymore, but Williams said he plans to keep himself motivated while continuing his training and pursuing a job in sports management.

Considering he has been running since the age of 5 and his mother, Debbie, is the Sapulpa High School cross-country coach, that shouldn’t be difficult.

“It’ll be about time management because I’ll have to look into a job and a career, so I’ll have to manage things, but I still want to get faster,” Williams said. “I’m 22, and I feel like I can continue to get faster and just keep trying to elevate it up and find races and compete unattached at college meets. That’s what I want to do but also still have a job and move on to that part of my life.”