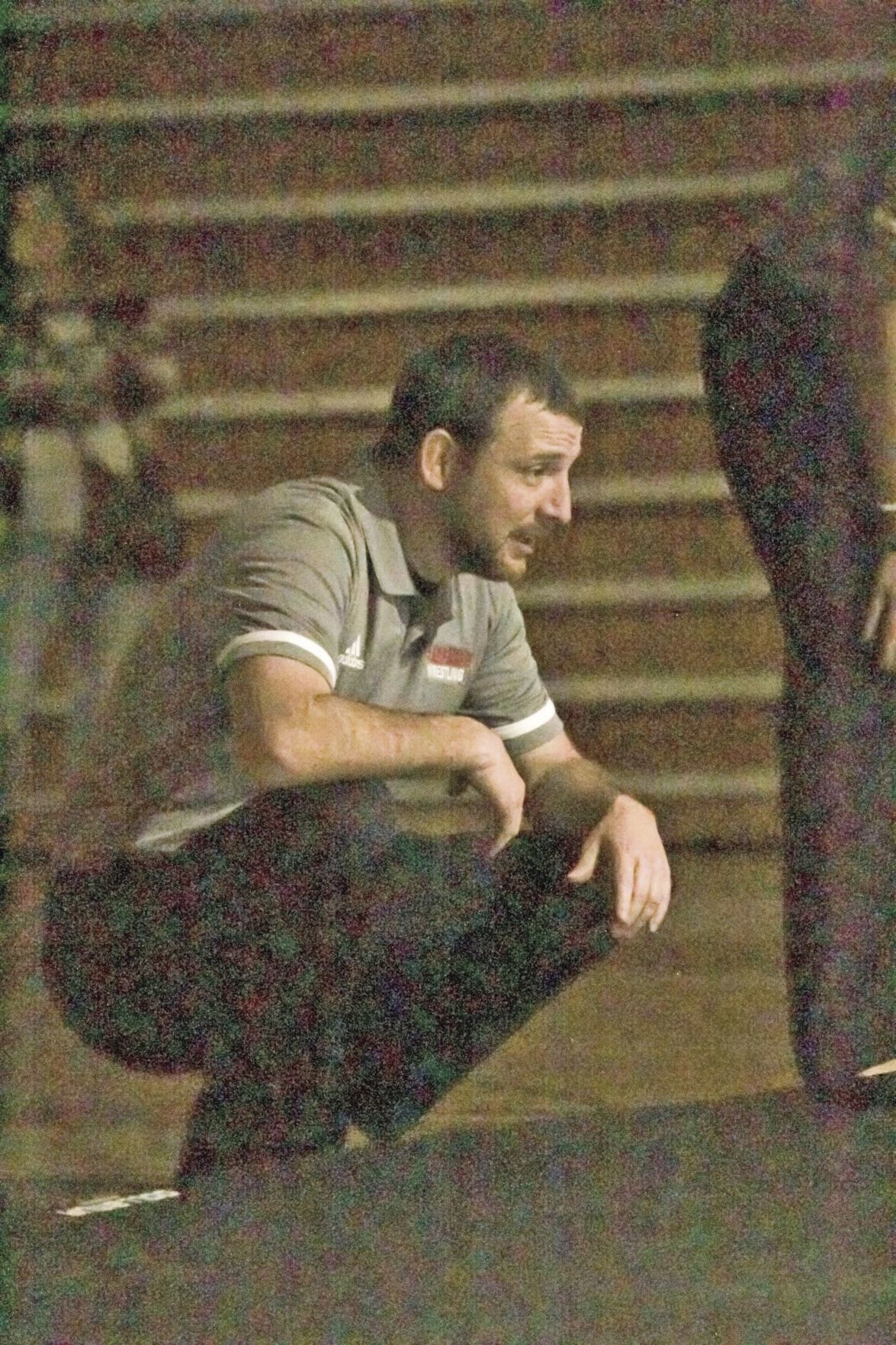 Claremore wrestling coach Chad Willard barks instructions to one of his female wrestlers during the state’s first all-girls dual on Friday, Dec. 6, at Frank Mobra Gymnasium. Willard played a big role in the scheduling of the dual, and he also sought girls to join the team months before anything was official. Because of him, Claremore has 11 female wrestlers this season. 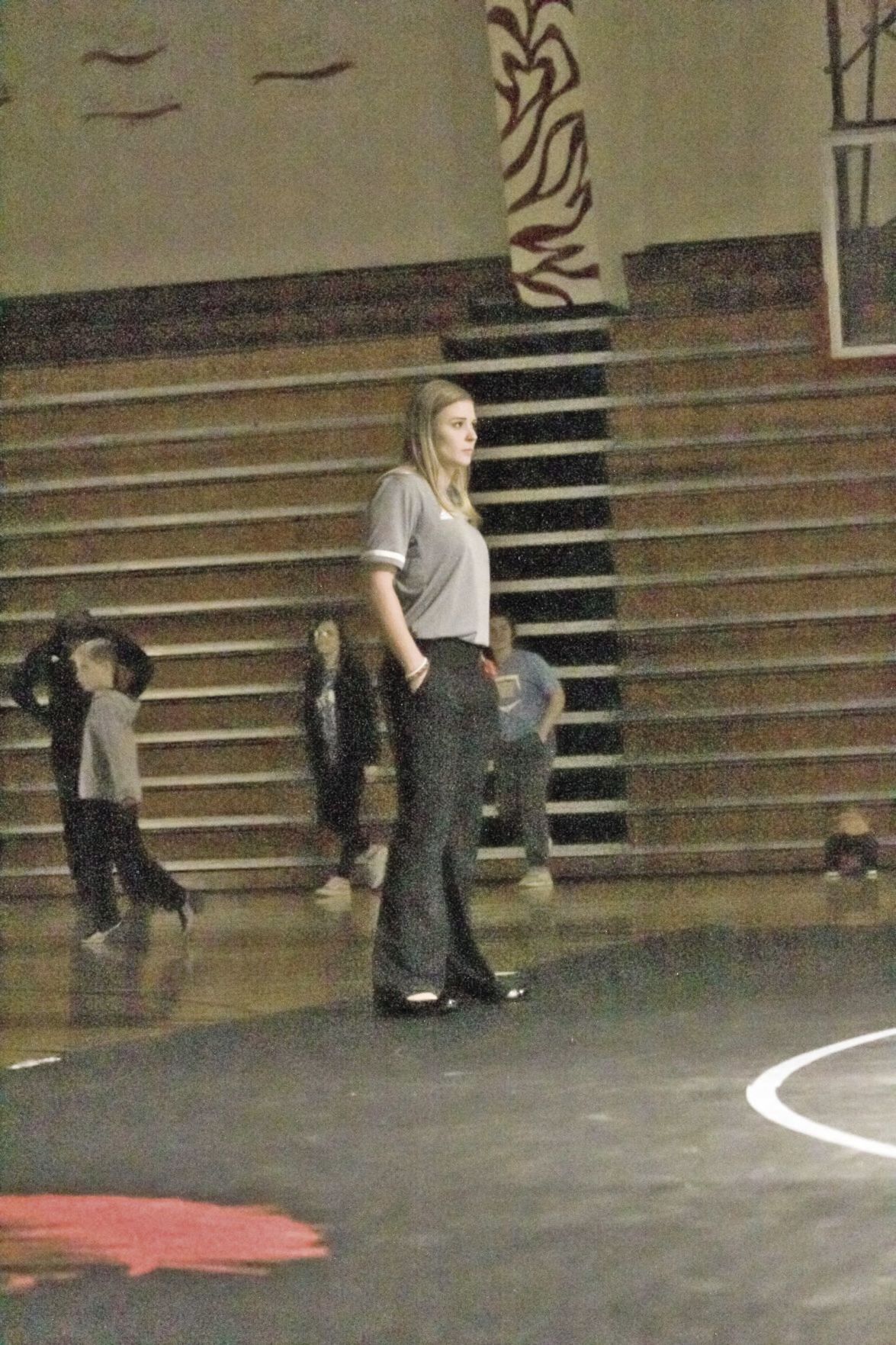 Claremore wrestling coach Chad Willard barks instructions to one of his female wrestlers during the state’s first all-girls dual on Friday, Dec. 6, at Frank Mobra Gymnasium. Willard played a big role in the scheduling of the dual, and he also sought girls to join the team months before anything was official. Because of him, Claremore has 11 female wrestlers this season.

Editor’s note: This is Part 1 of a series chronicling the first all-girls wrestling dual in Oklahoma history. Part 2 will focus on the wrestlers’ experiences from the contest and the events leading up to it.

CLAREMORE — Frank Mobra Gymnasium has hosted many events over the years, but on Dec. 6, it served as the perfect backdrop for history in the making.

The schools put on quite a spectacle for the estimated 300 spectators who packed the gym’s stands, showcasing their athletes through a slate of 24 matches.

“We decided to make it a showcase for everyone,” Willard said. “Instead of just doing the 10 weights that they allotted, we did the 10 weights and then matched them up and did a bunch more. Some of my girls had to wrestle three times, but that’s OK.

“I told the girls it wasn’t about wins and losses, it was about what they’ve done and what they started.”

These “grapplers” are pioneers for girls wrestling in Oklahoma, and OSSAA assistant director Todd Goolsby announced an even more promising revelation for the sport only days after the event.

Last school year, 90 girls across 59 schools competed in wrestling, and those numbers have grown exponentially for the 2019-20 season.

The number of schools competing has grown by 20, and there are now 310 registered female wrestlers as of Dec. 26. Claremore sports 11 of them.

With the sport rising in popularity, the OSSAA hopes to have a dual state tournament within the next couple of years.

To expedite that idea, a competition for girls will be held in conjunction with the boys state tournament this season on Feb. 28 and 29. Individuals from 11 weight classes will be awarded state championships.

“Them being willing to jump out there and do this has opened a lot of eyes to some girls,” Willard said. “Even walking around some of these youth tournaments, there are hundreds of those little girls running around. It’s going to grow, and I think it’s going to grow a lot faster than we think it will. The sky is the limit.

“A lot of other states have picked it up, and it’s taken off, so I don’t see why it wouldn’t here.”

The groundwork has been laid, and Claremore, along with Broken Arrow, is at the forefront of the proliferation.

Here is how the trailblazing Zebras created and shaped the inaugural all-girls wrestling dual.

Chad Willard knew what was coming, and he wanted to embrace it.

However, he couldn’t manage a girls wrestling program on his own; not with the responsibilities already bestowed upon him as the boys coach.

All he needed was a coach who could adequately mentor and connect with female student-athletes.

Willard wasn’t sure where to turn, but it was social media of all things that pointed him in the right direction.

One day while scrolling through Facebook in 2018, he happened upon a video of a woman deadlifting at a Halloween party while dressed as Ms. Frizzle from “The Magic School Bus”.

This wasn’t a random viral video, though. The person of interest in the video was Crystal Klaver, a fellow teacher at Claremore.

Klaver had no prior coaching experience, but that didn’t bother Willard. Her weight-room strength alone was enough for him to take a chance on her leadership skills.

“He saw (the video), and he was like, ‘Oh, you’re strong! We’re going to get a girls wrestling program next year, and you’re going to be the coach,’” Klaver said. “Then we laughed and went separate ways.”

Willard wasn’t even sure if she took him seriously, but any doubt he harbored soon dissipated.

“I went to practice the next week, and he was like, ‘What are you doing here?’” Klaver said. “And I was like, ‘I thought we talked about this? I was going to learn wrestling so I can coach the girls next year.’”

Learn was the key word.

In addition to having no coaching experience, Klaver had limited knowledge of wrestling. Powerlifting was her preferred domain.

In fact, she competes with the United States Powerlifting Association (USPA) in benching, squatting and deadlifting events.

She broke the UPSA state deadlift record with a mark of 352 pounds earlier this year, shattering the previous best by 5 pounds.

“It’s just something I got into when I was in college,” Klaver said. “I do it competitively now, but just for fun.”

Much like the girls who joined the wrestling program this year, Klaver experienced a learning curve.

Although powerlifting and wrestling both require significant strength, there are different rules and regulations to abide by and different techniques to be mastered.

To start out, Klaver admits she was more of a bus driver than an actual coach. She had to study and fully immerse herself in the sport before she could confidently guide a group of athletes on a regular basis.

So she watched and dedicated herself to gaining the insight and knowledge she needed. She learned something new each day of practice.

“It’s been pretty life-changing. It started as a joke, and here we are. I love it. I’m by no means an expert in this sport, but it’s very fun. I have a lot of fun with the girls, and I can tell they have fun doing it.”

With a new coach fully on board, it was finally time to get to work. By the time summer practices rolled around, Claremore had 10-15 girls actively participating in team workouts.

Satisfied with the turnout, Willard looked to set a date for what would become a historic event in Oklahoma.

Naturally, Broken Arrow was the first school that came to mind.

He reached out to Lady Tigers coach Cassidy Jasperson, a former collegiate All-American wrestler for Oklahoma City University, and the two struck up a deal to have the programs meet early in the season.

It was a no-brainer for both coaches. This dual would set the foundation for girls wrestling in Oklahoma, and they knew it.

“Without saying it, both of us were thinking we need to do this to be historic,” Willard said. “That is where I was angling from. I wanted to get this done and get it scheduled for the first week of the season. I think she did, too, but neither of us really said that.

“That’s how it came about.”